Vaccinations Continue as Oregon Gets Off Track 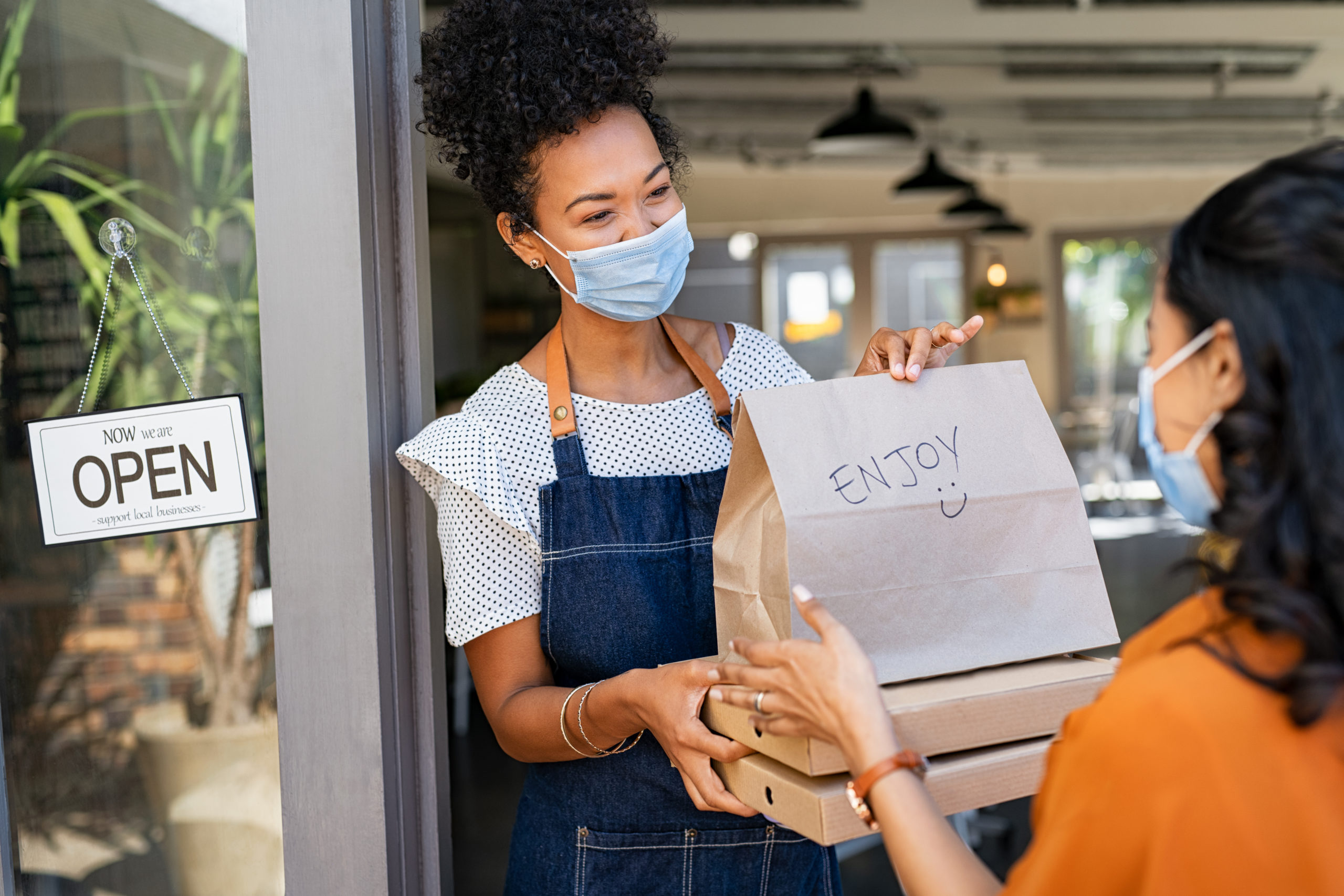 The ongoing story continues. The United States is making great progress in its effort to vaccinate its citizens. The US, Israel, the United Kingdom and Chile lead the world in the share of people who have received at least one dose of a vaccine.

Unfortunately, Oregon is facing a marked and disturbing increase in new cases. Governor Brown is threatening to roll back measures she took to open up the state. As we live in Oregon and one of our offices is in Beaverton, Oregon, we’re of course watching these developments with great interest.

The debate about an infrastructure program and how to pay for it continues in Congress. Senate Republicans have proposed a package that is much smaller ($568 billion) than that offered by the Biden Administration ($1.3 trillion). Republicans are particularly opposed to Biden’s inclusion of $400 billion to care for senior and disabled Americans, as they don’t consider that infrastructure.

There is also discussion about raising taxes on corporations (from 21% to 28%) and on high-income earners, and a hike in the gasoline tax to pay for whatever infrastructure program eventually makes it through Congress.

Globally, across 213 countries and territories, there have been over 147 million confirmed cases and over 3.1 million deaths. In the United States, over 32 million have been infected and over 572,000 have died. The virus is nearly out of control in India.

Friday the yield on the 10-year Treasury Note was 1.56%. Yields have moderated a bit recently which suggest investors are mildly less concerned about rising inflation.

The number of new COVID-19 cases has again begun to bend downward. However, there are a few wayward states, including Oregon, that are experiencing a marked increase in cases.

It is not entirely clear what is happening in Oregon. But if you are an Oregonian, get vaccinated and remain vigilant.

In the US as a whole: 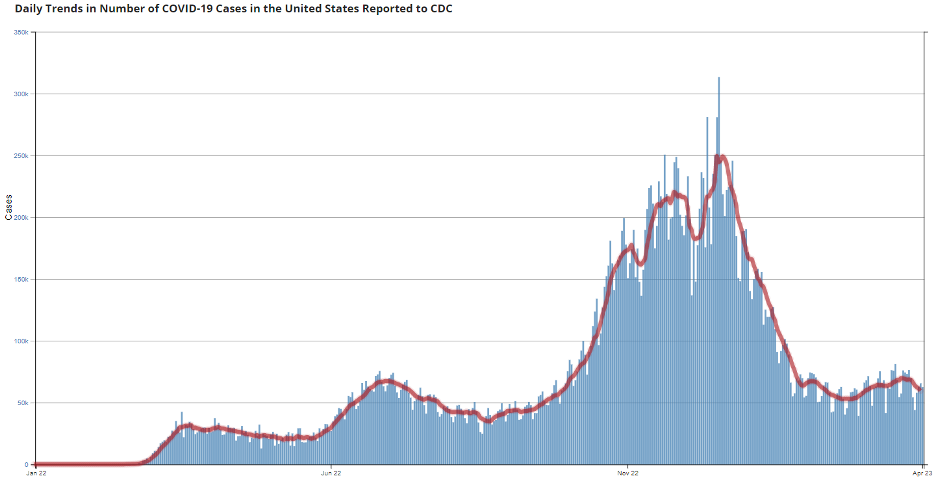 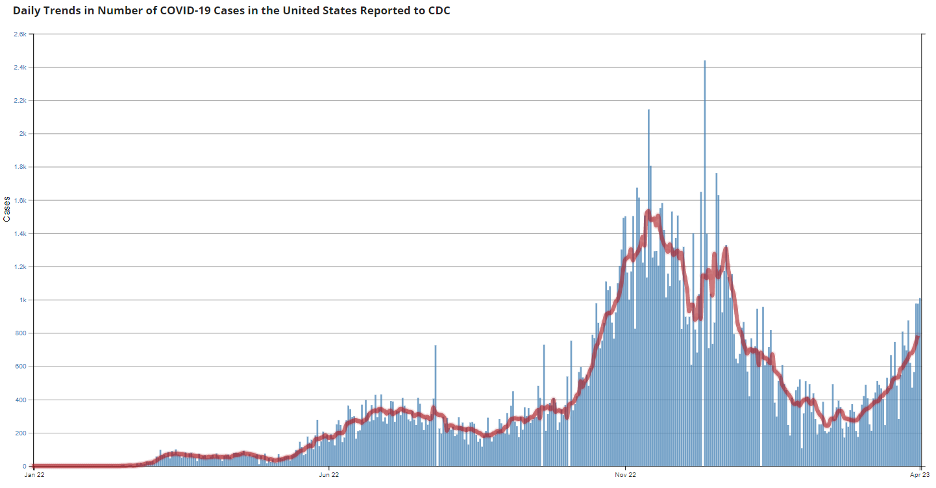 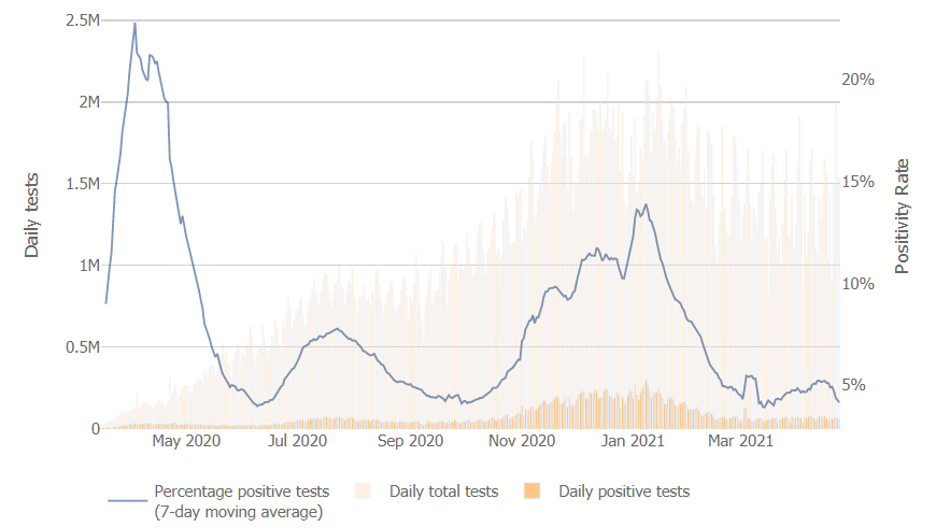 The number of deaths per day is declining. We have better therapies for those who contract the virus.
Also, the seven-day moving average (red line) is again nosing down. 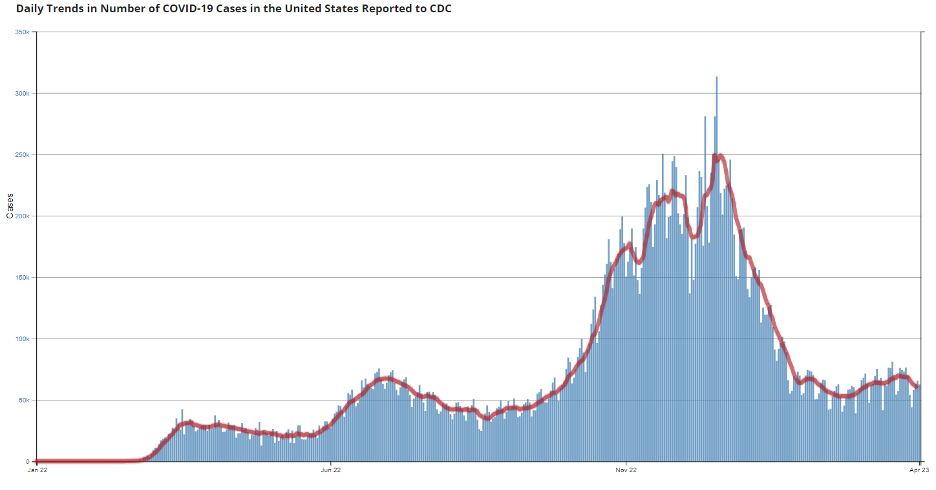 The Institute for Health Metrics and Evaluation (IHME) at the University of Washington projects that a total of between 596,000 and 634,000 Americans will die from the virus by August 2021. The variance is driven by mask usage, vaccinations, and other containment strategies.

As of April 19, all Americans over the age of 16 became eligible for a vaccination for COVID-19. Washington, Oregon and California were among the last states to meet President Biden’s deadline.
Hopefully, you are among those Americans who have been vaccinated.

Unfortunately, the rate of vaccination across the country has begun to slow (see the chart below). While over half of all adults in the U.S. have received at least one of the shots and more than a quarter are fully vaccinated, most epidemiologists believe we have not reached the level of herd immunity.

The government will need to ramp up its education, awareness and promotion efforts to convince more Americans to get the shot.

A poll by AP-NORC indicates 75% of Americans are willing to get vaccinated. That is an increase over prior surveys and suggests the American people will eventually reach the goal of widespread immunity.

The Johnson and Johnson vaccine was temporarily suspended due to concerns about rare blood clotting in younger women. However, the FDA and the CDC have reinstated the J&J vaccine and it should be back online immediately. 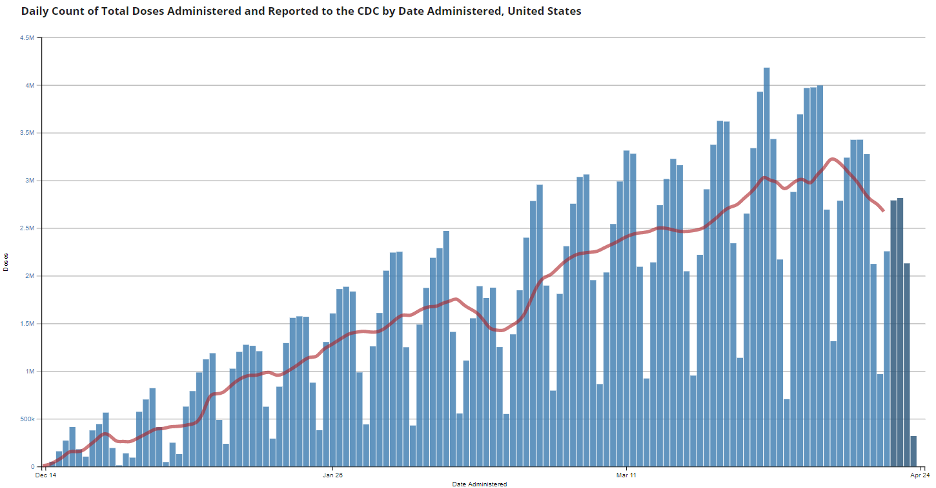 The Labor Department reported that Initial jobless claims fell last week to 547,000. This is the lowest level since the beginning of the pandemic. In addition, the number for the previous week was revised downward from 728,000 to 586,000. 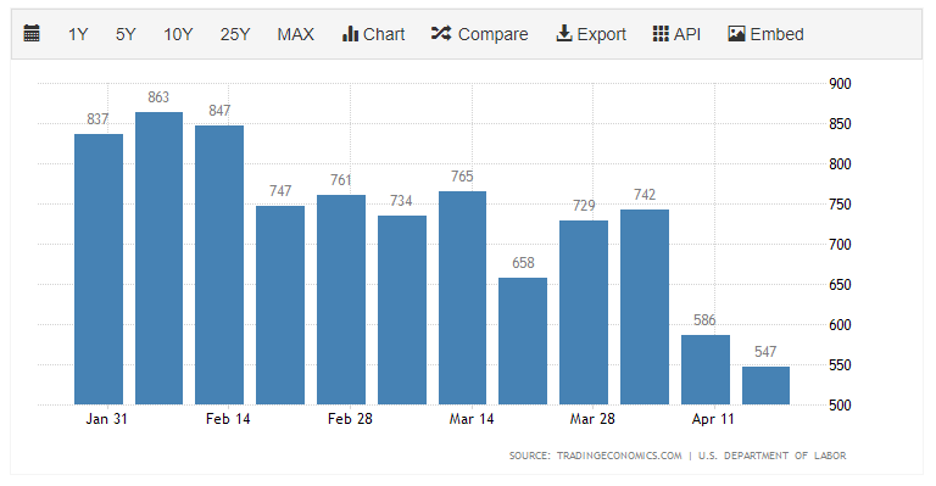 Ongoing unemployment claims dropped to 3.67 million in the week ending April 19, a decline of 34,000 from the prior week. As of march the economy is still down 8.4 million jobs than before the pandemic started.

Some 17.4 million Americans continue to collect unemployment benefits for the week ending April 3. In the month of March employers added 916,000 jobs, the most since last August. The unemployment rate has fallen to 6% from 15% at the height of the pandemic.

Sales at retail stores and restaurants rose 10% in March. U.S. gross domestic product grew at a 5.59% annual rate in the first quarter of 2021.

Wholesale prices jumped 4.2% in March compared to a year earlier. However, consumer prices rose only 2.6% in March from the prior year. This increase was driven mainly by a jump in prices at gas stations. Core inflation, which excludes food and energy rose just 1.6%. This is well within the Federal Reserves target range.

Humanity is in a race against a highly contagious virus that continues to mutate to thwart vaccines. The faster we stop the virus from spreading (and mutating), the sooner we will win this battle.