Vacationing During a Pandemic

The President is golfing at Mar a Lago this week

At the same time that the two were vacationing, millions of Americans saw their unemployment benefits expire.

Congress had passed a bipartisan stimulus bill last week, directing $900 billion in additional emergency relief funds into the economy. Treasury Secretary Mnuchin praised the legislation, which Democratic and Republican congressional leaders took as a sign that the president would sign it into law.

But the president released a video last Tuesday that demanded changes to the proposed legislation, including larger stimulus checks and spending cuts – issues he hadn’t raised until after Congress had passed its bill. The president’s behavior created panic in Congress over the weekend, as members worried about the effect of a government shutdown in the midst of the worst health crisis in 100 years.

Late Sunday, though, the president caved, and signed the stimulus bill and government funding package into law. The latter approves $1.4 trillion in government spending to fund federal agencies through the end of the fiscal year in September.

In a statement issued after signing the law, the president released another series of false claims and grievances. He said he would be sending a “redlined” version of the bill back to Congress “insisting that those funds be removed from the bill.”

If the bill hadn’t been signed into law by the deadline tomorrow, hundreds of thousands of federal employees would have been sent home without pay. And even the many federal employees who would have continued to work because they are deemed “essential,” such as members of the military, wouldn’t have been paid until a new funding bill was authorized.

In addition to a government shutdown, eviction protections for millions of Americans would have lapsed later this week; more than 14 million people would be losing unemployment benefits; and no stimulus checks would be issued. Not signing the bill into law would also freeze new money for vaccine distribution, small business support, the struggling airline industry, and school aid, among other things.

Early Christmas morning, a man in Nashville, Tennessee detonated a massive homemade explosive device packed inside a recreational vehicle. The RV exploded in front of an AT&T transmission building in downtown Nashville, damaging businesses and causing widespread disruptions to cell service and internet connections. Only the bomber died in the blast, which local officials credited to first responders who evacuated nearby buildings after arriving on the scene and before the RV explosion. The motive remains unknown.

Statistically, December has been the worst month so far for the pandemic in the US. Some 65,000 have died, and over 5.5 million cases have been reported. The numbers are widely expected to get much worse over the coming weeks, as cases resulting from holiday travel are reported.

Novavax today announced the start of the Phase 3 trial for its COVID-19 vaccine in the US and Mexico. Novavax is the fifth company to launch a large-scale trial of a coronavirus vaccine in the US. The trial is being funded with up to $1.6 billion from the government’s Operation Warp Speed.

Novavax is also currently conducting a Phase 3 clinical study in the United Kingdom, a Phase 2b trial in South Africa and a Phase 1/2 continuation in the US and Australia, data from which are expected as soon as next month.

Two vaccines – from Pfizer/BioNTech and Moderna – have received emergency use authorization from the US Food and Drug Administration. Both began Phase 3 trials in the US in July and enrolled over 30,000 participants. Both are two-dose vaccines and have been shown to have 95% and 94.1% efficacy, respectively.

AstraZeneca began the Phase 3 US trial of its coronavirus vaccine in September. Johnson & Johnson, which is testing a single-dose vaccines, expects efficacy results from its Phase 3 trial by January or February.

As of this weekend, nearly 2 million (first) doses of vaccines have been administered in the US. 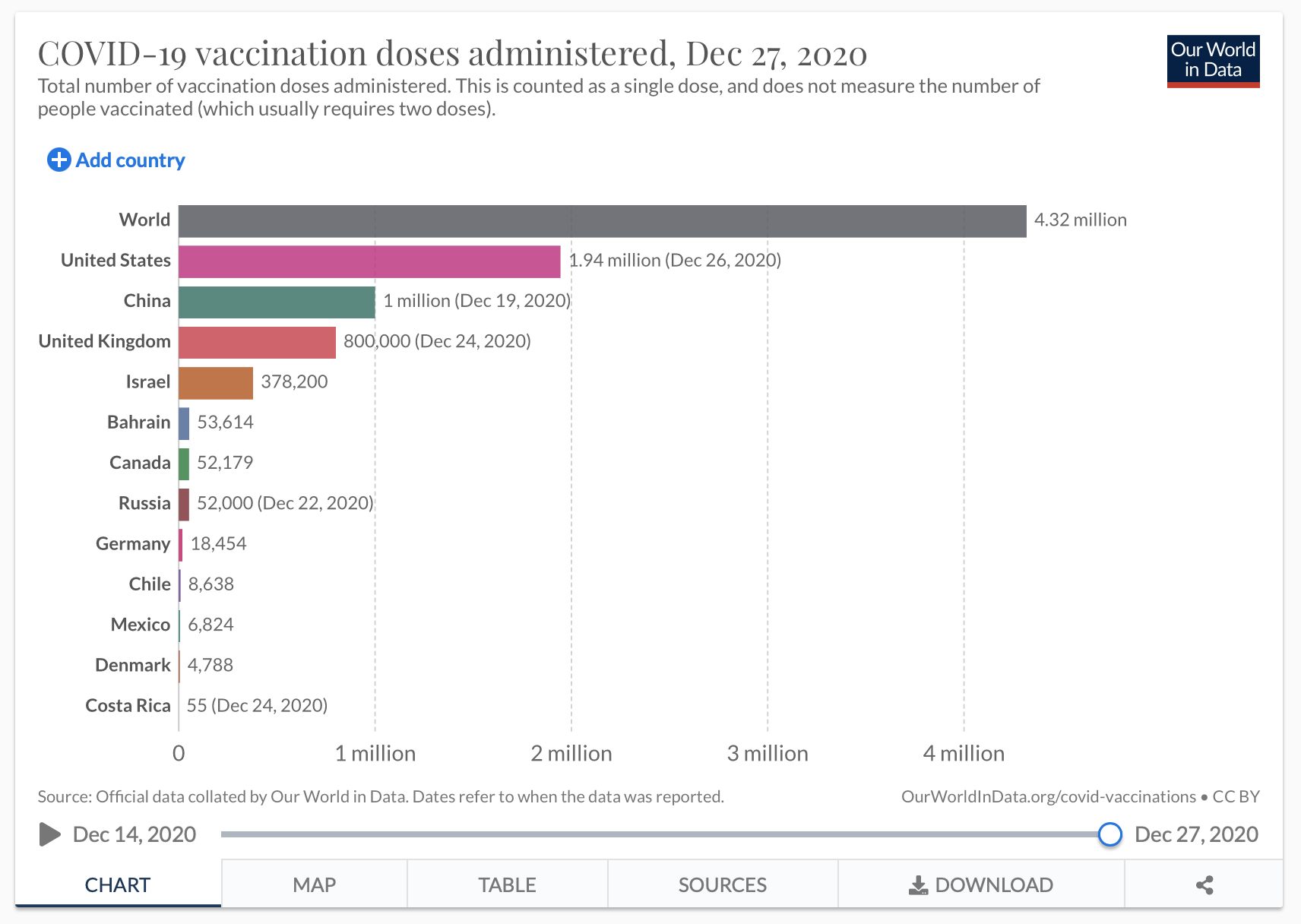 The US is now consistently administering over 1.5 million tests per day. Worryingly, the positivity rate remains stubbornly high at near 10%. Things are widely expected to get much worse in the coming weeks, as a result of travel and gatherings over the Christmas holidays, and because colder winter weather is forcing more people indoors. 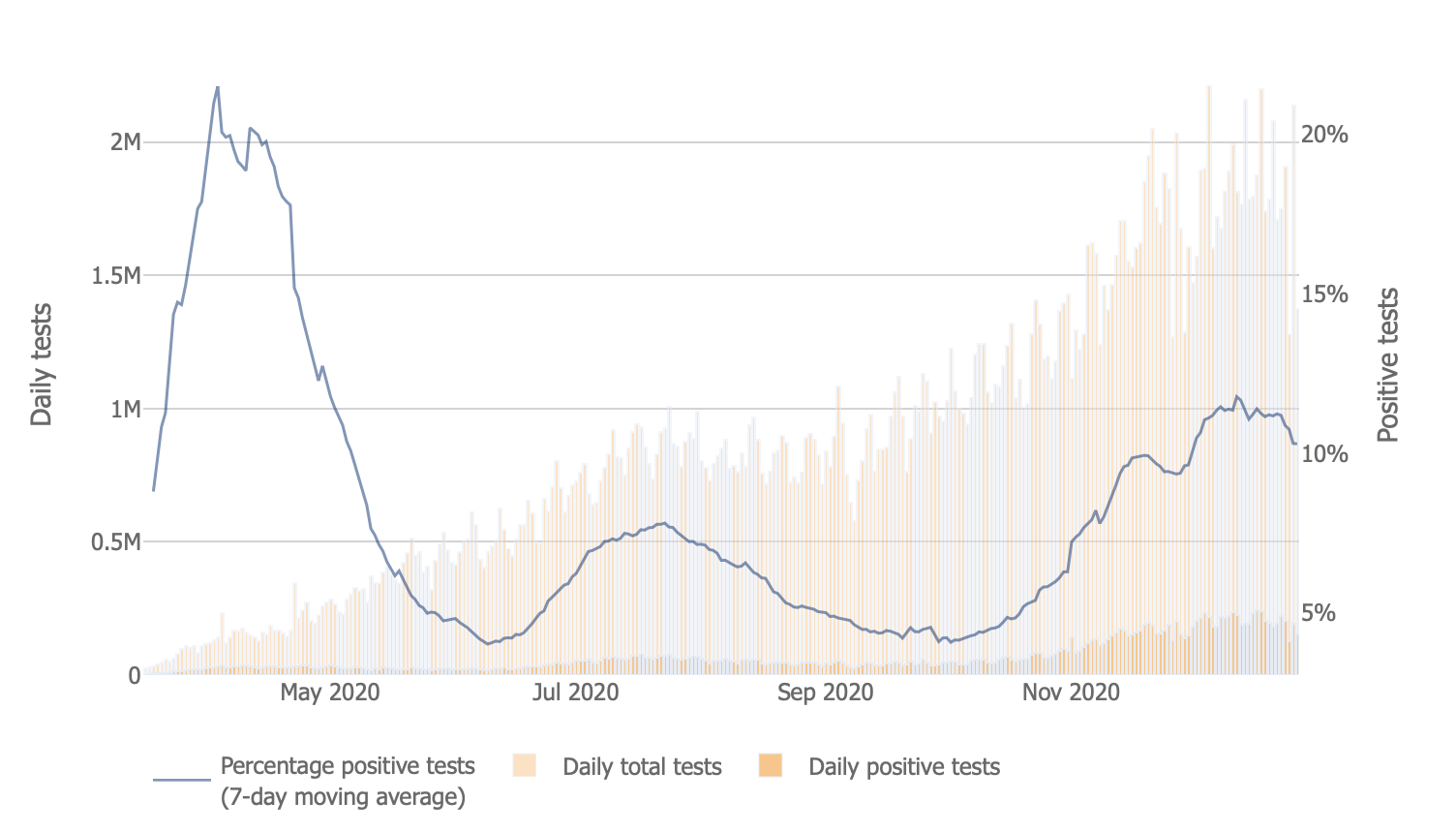 Since November, the US has been recording about 1 million new cases a week. 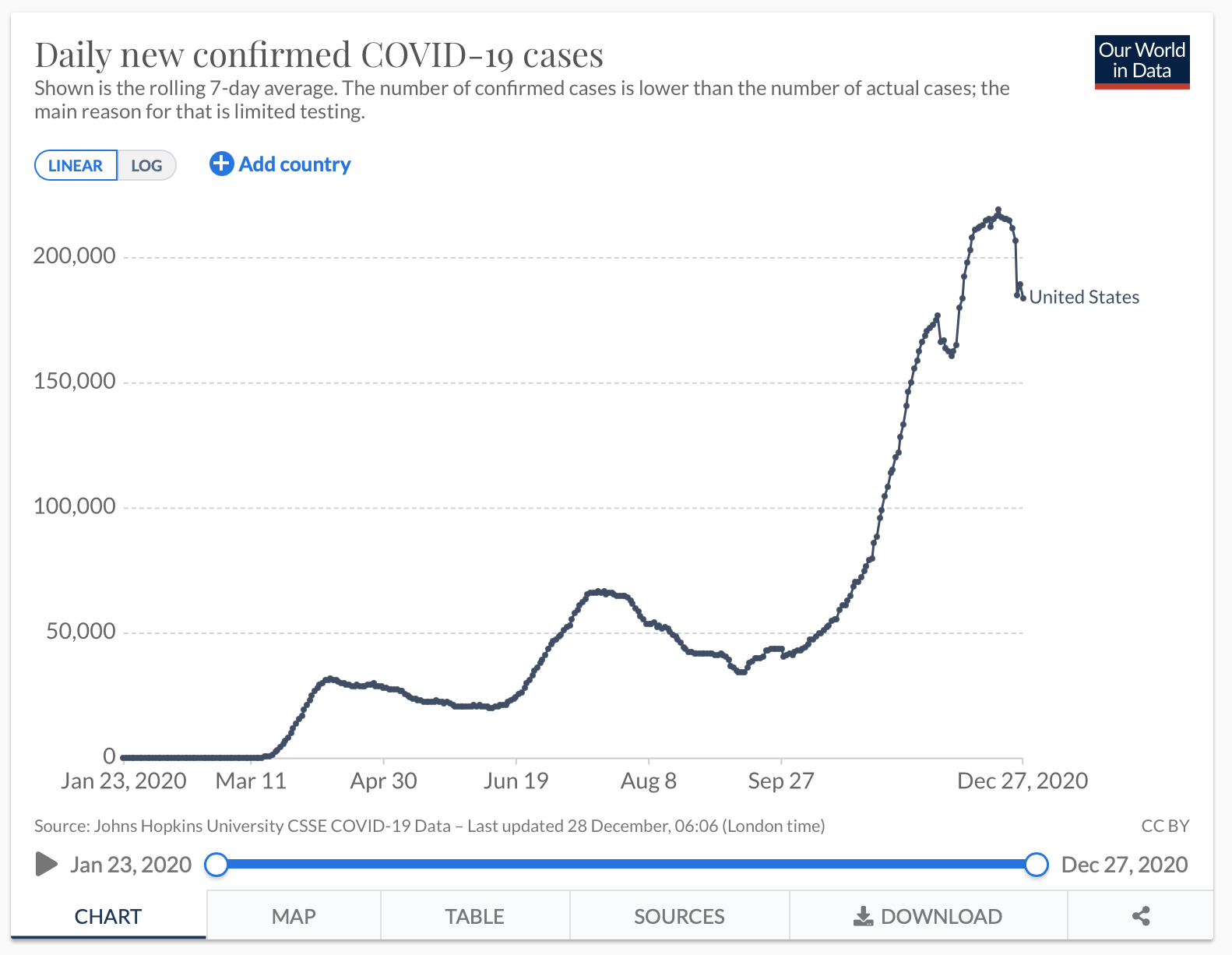 The number of Americans hospitalized as a result of contracting the coronavirus continues to climb, and has totaled over 100,000 for several weeks. 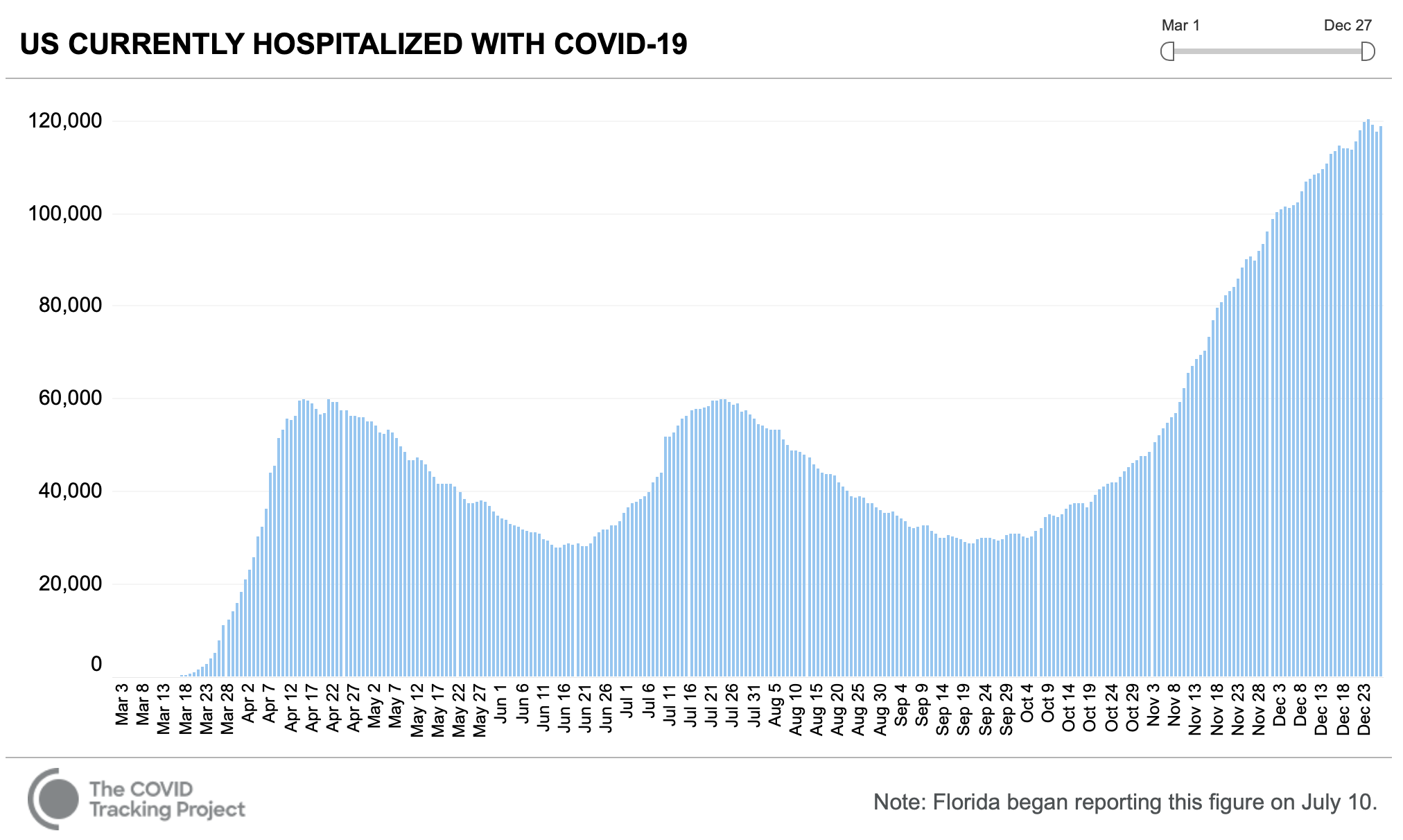 One out of every 1,000 Americans has now died from effects of the coronavirus. Public health officials are projecting that the death toll will surpass a half-million by the spring.

The chart below provides a summary of some key metrics since April 1, shortly after the pandemic began:

The number of Americans filing for unemployment benefits decreased to 803,000 for the week ended December 19th, from the previous week’s three-month high of 892,000. Claims remain far above the 200,000 level reported back in February and will likely remain high for some time as the pandemic remains uncontrolled, although vaccination has already started.

Also, about 398,000 people applied for help from the Pandemic Unemployment Assistance scheme, which covers workers that do not qualify for initial claims, compared with 454,000 in the previous period.

The chart below from Yahoo! Finance shows the year-to-date performance of the S&P 500 index.

This is our last writing before 2020 comes to an end. A year that most of us will be all too glad to leave behind.

We wish all of you a healthy and happy new year, and remain available to support you in any way we can.