The Virus Reaches the White House

Unsurprisingly, the news that has dominated the headlines since we last wrote is that the President has been infected with the Coronavirus.

Senior aide Hope Hicks tested positive for the coronavirus on Thursday morning, before the President traveled to New Jersey for an election fundraiser. Upon his return, he took a rapid test, which came back positive, followed by another, more precise test. Later that night, the results of the second test also showed he was positive, and the president disclosed his diagnosis in a tweet.

On Friday afternoon, Trump was taken to Walter Reed National Military Medical Center for treatment. Since then, he has been treated with a range of drugs and experimental therapeutics, including the steroid dexamethasone, the antiviral drug remdesivir and a cocktail of monoclonal antibodies that has not yet been approved to fight the virus by the Food and Drug Administration.

It remains unclear when Trump last tested negative for the coronavirus, a question White House officials have declined to answer even as a growing number of people in the president’s administration have tested positive in recent days.

On the Sunday morning talk shows, the Administration was excoriated by public health officials for providing limited and contradictory information about President Trump’s health. His personal physician admitted that Trump had begun a steroid treatment after twice suffering bouts of low oxygen, but also stated that he was doing well and could soon be discharged from the hospital.

Later Sunday, Trump briefly left the hospital in an SUV to wave at supporters, risking infection for the two Secret Service agents who were also in the car. Dr. James Philips, an attending physician at Walter Reed, described the President’s irresponsibility as “astounding”.

It appears that the Rose Garden reception for the nomination of Amy Coney Barrett may have functioned as a “super spreader” event. At least eight people who attended have tested positive for the virus, including the First Lady, the President of the University of Notre Dame, and at least two senators.

The Economy
The latest report from the Labor Department shows that job growth slowed significantly in September, with US employers adding 661,000 new workers. Unemployment fell to 7.9% from 8.4% in August, but the drop was driven primarily by people leaving the labor market – especially women with school-age children. 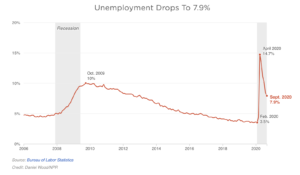 In a clear signal that the economic recovery is slowing, job gains have declined in each of the past three months. And a new round of layoffs – not reflected in these statistics – is coming, as the pandemic continues to impact sectors like airlines, hotels, theme parks and restaurants. 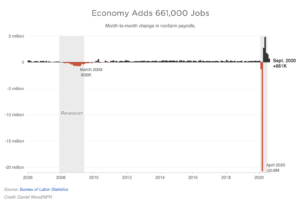 More than 1.4 million people applied for unemployment benefits last week, and more than 26 million were collecting some form of unemployment benefit as of mid September. While unemployment has fallen faster than many economists had predicted in the spring, the US economy has so far only recovered about half of the 22 million jobs lost in March and April.

The Markets
The third quarter has just come to a close. After recording a series of highs over the past several months, in September the major US indices posted their first monthly losses since March. The Dow Jones Industrial Average fell 2.3% in September, the broader S&P 500 index declined nearly 4%, and the tech-heavy NASDAQ dropped 4.9%.

Despite the drop, the S&P 500 ended the quarter up 8.5%, its best third-quarter result in a decade, the Dow finished the quarter up 7.6%, and the NASQAQ rose 11% for the three-month period.

The chart below shows the performance of the S&P 500 Index for the year to date.

The Public Health
About two-thirds of US states reported an increase in new coronavirus cases in the past week, according to data tracked by The Washington Post, indicating that colder temperatures in much of the country may be driving people indoors and helping to spread the virus.

As of Saturday night, new cases were down in Texas, Missouri and South Carolina, while 21 states reported a rise in cases and a little more than half held steady compared with the week before.

The chart below shows how new cases are trending in all 50 states. 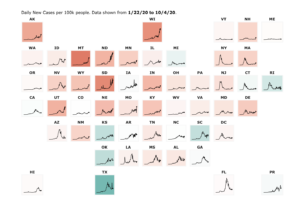 New York City officials announced plans to close all nonessential businesses and schools in nine Brooklyn and Queens zip codes, in the city’s first big reversal since reopening this spring.

Starting tomorrow, all bars in Paris and surrounding areas will close for at least two weeks, French authorities announced today, as the coronavirus resurges in France. Restaurants in the capital region will remain open, but under stricter sanitary guidelines. The French government contemplated closing them last week, but relented after protests from restaurant proprietors who said they couldn’t survive a second lockdown in the same year.

Several companies are conducting Phase 3 vaccine trials in the US, but it’s still unclear when a safe and effective vaccine will be available. Experts advising the federal government say front-line health care workers and those who provide health care facility services should be the first to get vaccinated, followed by people at high risk of severe illness due to underlying health conditions. Next should come older adults living in congregate settings, like nursing homes, a National Academies of Sciences, Engineering, and Medicine committee said in a final report.

But local leaders should also give priority to vulnerable communities, the committee said. That addition comes after criticism over the group’s draft report that was issued last month, which did not mention minority communities that have been hit hardest by the pandemic.