In a very short period of time, the attention of nation has shifted and this will have profound implications.

With the passing of Supreme Court Justice Ruth Bader Ginsburg and the soon-following nomination of Amy Coney Barrett to fill the seat left by Ginsburg, Senate Republicans have shifted their attention away from additional financial aid for workers and business impacted by COVID-19. Instead, the Senate will be immersed in judicial hearings for Barrett and focused on her confirmation as the next Supreme Court Justice before the end of the year, and very possibly before the November election.

While we find the politics of this process intriguing, as investment advisors we are concerned about the implications for the economy and for you, as investors. There are still tens of millions of workers who are either officially unemployed or who have dropped out of the labor force as a result of the pandemic. In addition, there are thousands of businesses and entire sectors of the economy (including restaurants, hotels, retail, entertainment, and transportation) that have been severely impacted by the economic disruption caused by the coronavirus.

The Federal Reserve has publicly stated that for the economy to continue to recover, Congress must provide additional support. The Democratic-led House passed another round of funding in May. But, since then, the House, Senate and the Trump Administration have been unable to agree on the terms of another package. The longer workers and businesses struggle, the longer and slower the nation’s economic recovery.

There is another shift occurring and it could have dire results. Over the past few weeks there has been an increase in the number of coronavirus cases in several states. Last Friday Oregon registered its single highest daily case count since the beginning of the pandemic. California’s daily case count remains elevated. Washington’s numbers have jumped in late September. Five other states (North Dakota, Oklahoma, Utah, Wisconsin and Wyoming) have experienced sharp increases in the seven-day average number of new cases. Dr. Scott Gottlieb, former Food and Drug Administration commissioner, noted early last week that there are 30 states in which the rate of transmission is above 1 (R>1), indicating an expanding epidemic.

We have lost over 200,00 lives to this virus. Yet, just as we enter fall, we seem to be shifting from containing the virus to attempting to managing it. States are expanding the operations of personal service businesses, opening schools and universities, allowing the resumption of recreational sports, and increasing the allowed size of public gatherings. These actions will bring people together and increase virus transmission.

We need to remember the words of Dr. Anthony Fauci, director of the National Institute of Allergy and Infectious Diseases, that virus will dictate what we can and cannot do. Given that we do not yet have an effective treatment or vaccine for COVID-19, we need to remain vigilant.

COVID-19 Numbers
Globally, across 213 countries and territories, there have been 33 million confirmed cases and nearly 1 million deaths. In the US, over 7 million have been infected and over 200,000 have died. 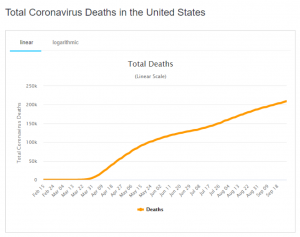 The Commerce Department reported that orders for durable goods (i.e. those lasting at least three years) rose in August, the fourth consecutive month. This suggests that we will see a corresponding increase in the production of goods.

Data from IHS Markit indicates that US service sector and manufacturing companies have reported solid growth this month. The nation’s economy is slowly and steadily recovering from the pandemic. The recovery in Europe and Japan is slow and uneven.

National Debt
The CBO is forecasting that the nation’s debt as a percentage of economic output (GDP) will reach 195% by 2050. The country is on an unsustainable path of accumulating debt as illustrated by this graph: 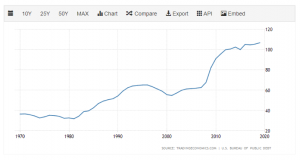 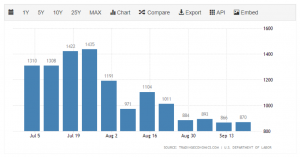 Parting Thought
Let us hope that the world’s best and brightest scientists develop an effective vaccination for the novel coronavirus within the next few months, that there is a robust and effective vaccine distribution system and that the vast majority of Americans are vaccinated. Until then we must practice proper physical distancing, wear a mask in public, and wash our hands.