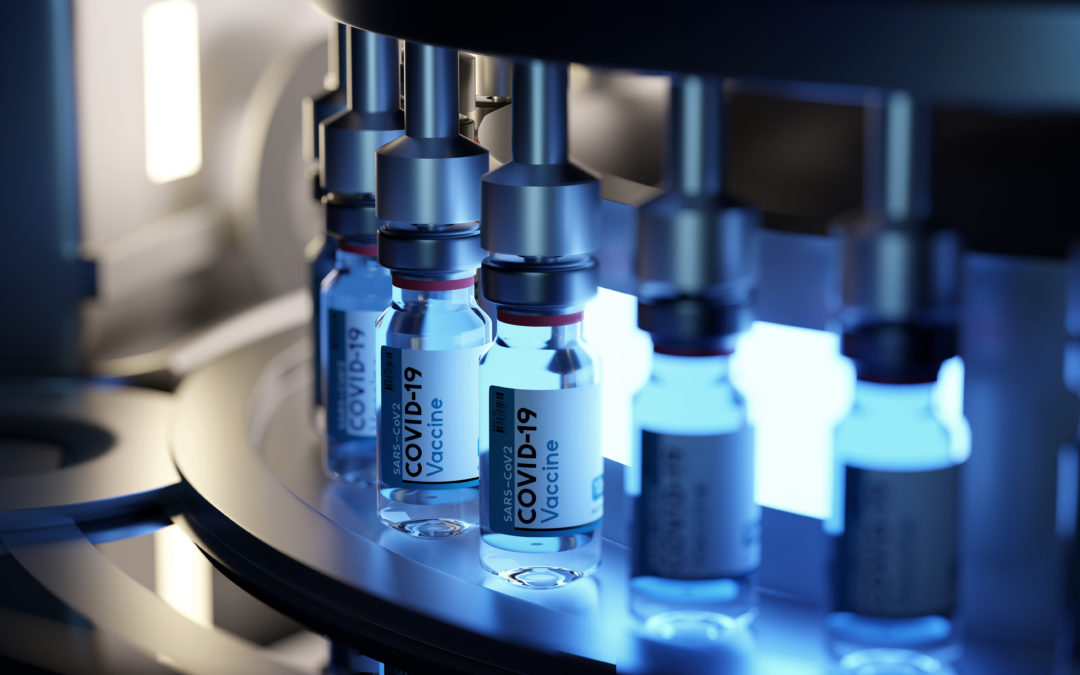 A few weeks ago, we used an ultra-marathon as a metaphor for the race we’re running against the coronavirus. Americans might think that this is a national race, or perhaps a race just for those of us living in North America. The reality is that this is a global race. To end the pandemic, a large percentage of the world’s population must be immunized to the virus.

While a few countries, including the US, Israel, and the UK, have vaccinated large portions of their populations, most of the world is far behind. Just 0.1% of vaccines have gone to low-income countries.
As most of the citizens of the world wait for a vaccination, the virus continues to mutate. Many of these variants are more infectious and deadly than the original strain.

President Biden has proposed a $2.3 trillion infrastructure package. He wants to invest in roads, bridges, transit, broadband and other infrastructure projects. To pay for it, Biden is lobbying to increase the domestic corporate income tax rate. In addition, Treasury Secretary Janet Yellen has suggested that the world adopt a minimum global tax rate. This would discourage large multi-national companies from manipulating their operations and accounting practices to minimize the taxes they pay.

If the administration is able to get their proposals through Congress, the corporate tax changes would generate $2 trillion over 15 years to pay for 8 years of infrastructure spending.

The infrastructure spending would add further fuel to the economy which has been stoked with $5 trillion in coronavirus relief and expansive monetary policy.

President is facing stiff resistance from Republicans and even from some more fiscally moderate Democrats. So, it’s not clear if or how he will be able to get his proposal through Congress.

We should expect the administration to turn its attention to the taxation of private businesses and individuals once we’ve escaped the grip of the virus. The current path of annual budget deficits – which add to the national debt – is simply not sustainable. Raising taxes on large publicly held corporations will not be enough to close the gap and begin to bring down the nation’s massive debt.

The International Monetary Fund is projecting the US economy will grow at a rate of 6.4% this year.
The IMF is forecasting global growth of 6.0%. The global economy contracted 3.5% last year, which was the most severe peace-time reduction since the Great Depression.

Globally, across 213 countries and territories, there have been over 136 million confirmed cases and over 2.9 million deaths. In the United States, over 31 million have been infected and over 562,000 have died.

Friday the yield on the 10-year Treasury Note was 1.662%. Yields have moderated a bit recently, which suggest investors are mildly less concerned about rising inflation.

Below is a comparison of the current bond yield curve with that of a year ago. We can see that current short term interest rates are below those of last year. However, longer rates are higher. We will keep an eye on the yield curve as it will tell us where the market thinks inflation is headed.

The number of new COVID-19 cases is going in the wrong direction. The seven-day moving average (red line in chart below) is rising. This means new cases are increasing.

Even as millions of Americas are getting vaccinated, they are also resuming travel, dining out, socializing and visiting indoor public venues. 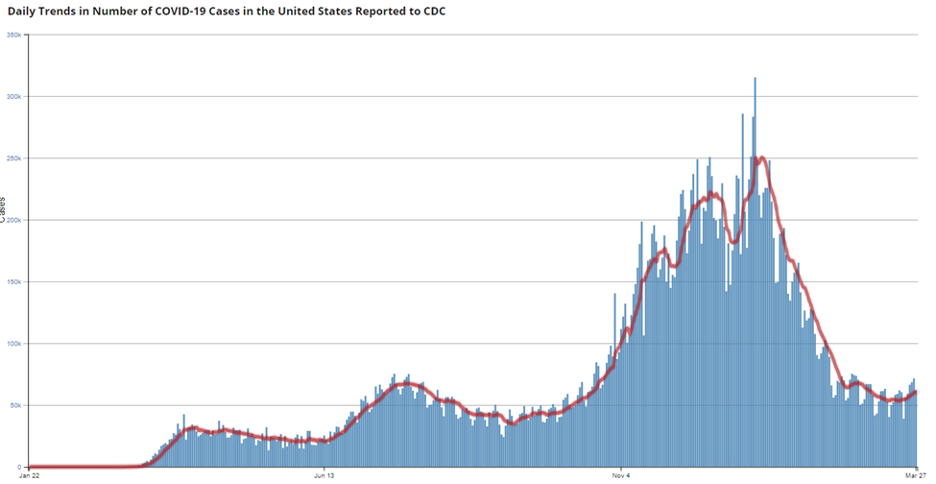 Testing continues to be less robust that it was a few months ago. Resources are going to vaccinations. However, the positive test rate is rising again and has been for several weeks. 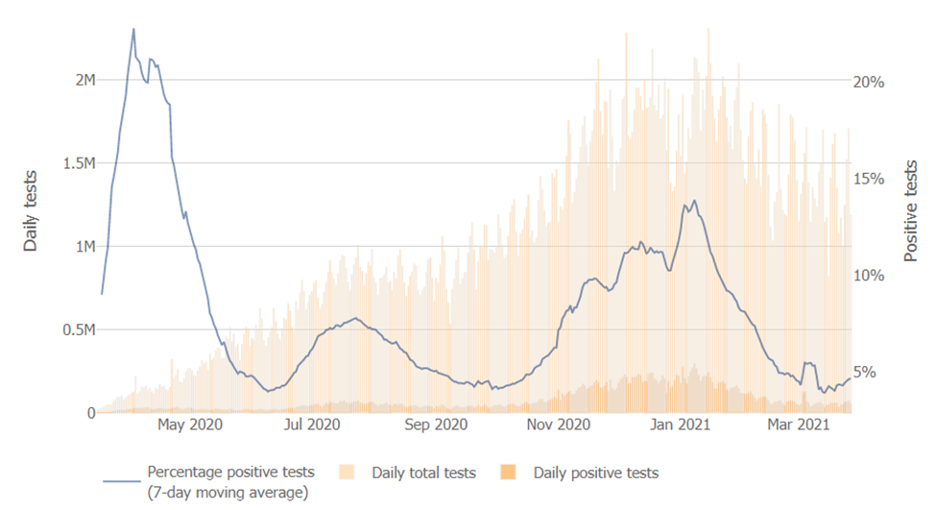 The rate of hospitalizations is on the rise again. This is directly related to the increase in cases. 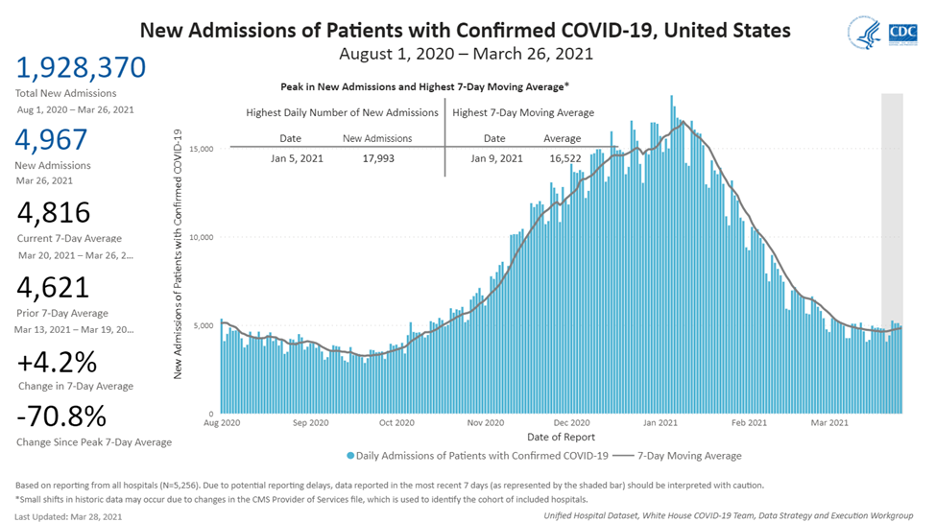 The number of deaths per day is declining. We have better therapies for those who contract the virus.

However, notice how the seven-day moving average is beginning to nose up again. This suggests the possibility of another wave of deaths. 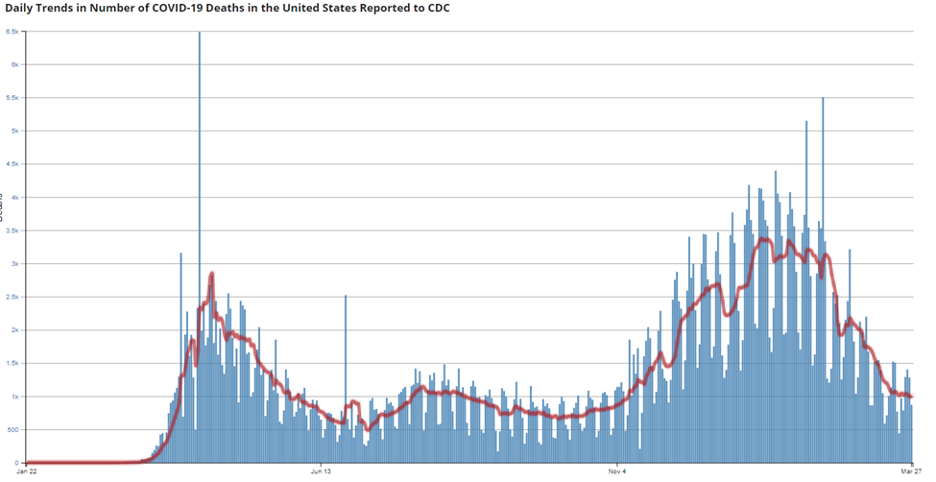 The Institute for Health Metrics and Evaluation (IHME) at the University of Washington projects that a total of between 604,000 and 697,000 Americans will die from the virus by August 2021. The variance is driven by mask usage, vaccinations, and other containment strategies.

President Biden said in March that all Americans would have an opportunity to be vaccinated by May 1. Last week he moved that deadline forward to April 19.

As you can see in the chart below, the pace of vaccinations has increased to 3.1 million per day.

There is one significant glitch. Johnson & Johnson’s vaccine supply will drop 80% this week as the company resolves manufacturing problems. The decrease will complicate the national effort to vaccinate all Americans. This should be temporary issue and J&J expects to ramp up supply again soon. 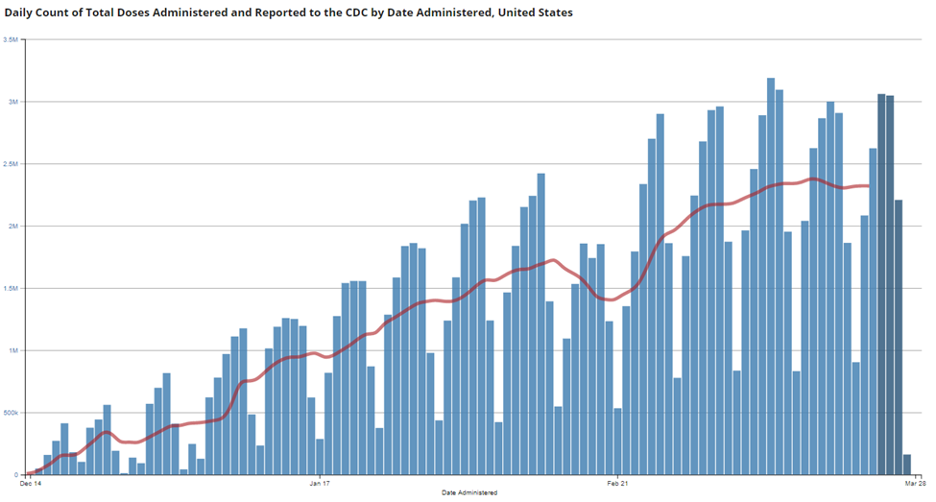 The Labor Department reported that Initial jobless claims increased by 16,000 to 744,000 last week.

Claims are still well above the weekly average of about 220,000 prior to the pandemic. 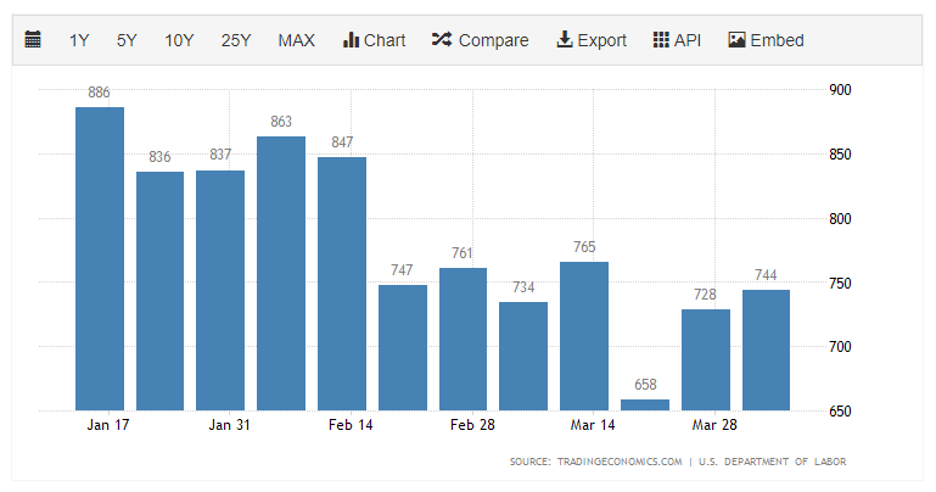 The number of jobs in the US remains 8.4 million below the level of February of last year. More than 4.2 million workers have been unemployed for six months or longer.

Federal Reserve Chair Jerome Powell indicated, during a conversation last night on CBS’s news program 60 Minutes that the US economy is at an inflection point. He expects growth and hiring to accelerate. But he remains concerned about a resurgence of the coronavirus.

We heard similar remarks from Dr. Anthony Fauci, director of the US National Institute of Allergy and Infectious Diseases and the chief coronavirus advisor to President Biden. He indicated that the nation was “at the corner,” not quite turning the corner.

We are now realizing that turning the corner is a global endeavor.