The Cost and Benefit of Reopening

Acknowledging the heroic efforts of our health care workers

Significantly, on any given day the “FAMGA” stocks – Facebook, Amazon, Microsoft, Google and Apple – make up between 20% and 25% of the S&P 500 Index’s capitalization, or value. This is something to keep in mind when thinking about real portfolio diversification.

The Economy
The Labor Department announced this morning that the US economy lost more than 20 million jobs in April. This shocking figure sent the unemployment rate to nearly 15%. These are numbers not seen since the Great Depression nearly 100 years ago.

The report highlights the speed and depth of the collapse of the American economy due to the coronavirus pandemic. In February, just a few weeks ago, the unemployment rate was 3.5%, the lowest in 50 years. And, millions more have filed claims for jobless benefits since the Labor Department’s survey was taken. 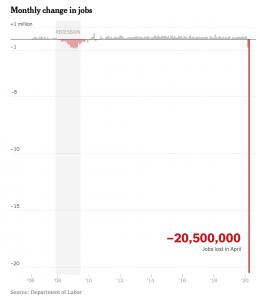 The Public Health
Nearly nine in ten US states have started relaxing their lockdowns, as protesters have been agitating for the right to return to work, to get their hair and nails done, and to dine out in restaurants and drink and socialize in bars. The President has been one of the most vocal proponents of this easing, contradicting his own public health experts and scientists.

Ironically, few if any of the states that are gradually reopening have met the Administration’s criteria or benchmarks for doing so, which were announced with great fanfare just a few weeks ago.

More than a month has passed since there was a day with fewer than 1,000 deaths from the virus. Almost every day, at least 25,000 new coronavirus cases are identified, meaning that the total in the United States, which has the highest number of known cases in the world with nearly 1.3 million, is expanding by between 2 and 4 percent a day. 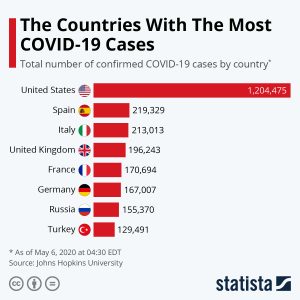 We’re testing fewer people per capita than other countries, and the outbreak is still growing in many states that are starting to reopen.

Where is This Going?
The most likely scenario, many experts believe, is that the premature reopening will lead to new outbreaks. That, in turn, could have tragic consequences, with thousands of otherwise avoidable deaths.

Anxiety Reigns
Notwithstanding the small but high-profile protests taking place at many state capitals, the American public remains anxious about the virus. Even in states that have started to reopen, many people are staying at home. In Alaska, Georgia, Oklahoma and South Carolina – all states that have removed some restrictions – there has been little increase in the number of small businesses that are open, or in the amount of time people spend at work.

Strengthening Connections
Many of us have marked significant milestones or dates during the coronavirus lockdown – birthdays, anniversaries, graduations. In our home, we just finished celebrating the third of (likely) four birthdays under lockdown. Fortunately, it’s still possible to pick up a cake at Whole Foods…

As we noted in one of our previous writings a few weeks ago – March 31st, to be precise – many of us are isolated, lonely, and worried about family and friends. But, there are things that we can do to support each other, like a phone or FaceTime call, an offer to listen, or a sincere expression of interest and caring. More than ever, it’s important to remember that kindness is good for your health.

This weekend, our family will (re)watch The Before Trilogy together. Directed by Richard Linklater, the three-part story follows a young couple’s relationship as it begins, begins again, deepens, and strains over the course of almost two decades. If you’re a cinephile, or if you enjoy Linklater’s unique work, you won’t be disappointed.

We remain available to speak with you at any time.