Thousands of vehicles wait in line for food donations in Dallas, Texas

The novel coronavirus is spreading uncontrolled across much of the nation. By virtually all metrics, the virus is spiking. The number of cases (an average of 170,000 new cases a day, and 1 million in less than a week), positivity rate (10%), hospitalization rate (83,000), ICU numbers and fatalities have all gone up dramatically.

State and local health authorities are taking a variety of measures to stop the spread of COVID-19. Masks are now required. Restaurants, bars, and gyms have been closed again. Travel advisories and restrictions are in place. Curfews have been established. Private gatherings have been discouraged, limited or prohibited. Houses of worship must adhere to occupancy limits.

Earlier in the week, the Dow and S&P 500 hit new records, with the former just missing the 30,000-point level. Small cap stocks are up about 15% for the month alone.

Clearly, Americans have grown weary of the coronavirus and the radical disruption of life it has brought. This undoubtedly explains, at least in part, the rapid escalation of its spread. Other factors include the change in weather across the continent which has brought people together in enclosed spaces, relaxed mask use and hygiene practices, and rising mobility. The Centers for Disease Control and Prevention believes that 40% of those who are infected are asymptomatic, and yet the chance of transmission from people with no symptoms is 75%.

Fortunately, testing continues to increase at a rapid pace (see the image below). However, it will need to accelerate at an even faster rate. Currently, there are hours-long waits for tests and it can take several days to receive test results. 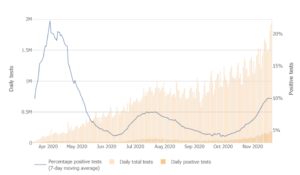 While the country made great progress over the summer developing contact tracing programs, these systems are getting overwhelmed in many parts of the country. There are simply too many infected people, inadequate technology to track all of them and not enough contact tracers.

It is evident from the fatality rate that our health care providers have developed much more effective treatments for the virus. While we are losing more people in gross numbers, the per capita rate is much lower than it was at the beginning of the pandemic. One study in the Journal of Hospital Medicine found that the death rate for patients hospitalized with COVID-19 fell from 25.6% to 7.6%.

There is very exciting news regarding vaccines. Pfizer and its German partner BioNtech announced that they have developed a vaccine that is 95% effective in preventing mild to severe cases from the coronavirus. Moderna released similar results with its vaccine, indicating that it is also 95% effective.

Both companies filed for emergency use authorization with the Food & Drug Administration. Both companies plan to make the vaccines available this year to essential and front-line workers, older individuals, and those with underlying health conditions. Younger and healthier Americans can expect to have access to these vaccines in the second or third quarter of next year.

There are complex manufacturing, distribution and storage challenges with these vaccines. But it is extremely encouraging to have them (and others from AstraZeneca PLC, Johnson & Johnson and Novavax) on their way.

Globally, across 213 countries and territories, there have been almost 59 million confirmed cases and nearly 1.4 million deaths. In the United States, over 12 million have been infected and over 256,000 have died.

The Food and Drug Administration has approved the first at-home, self-administered coronavirus test that provides a result within 30 minutes. The test identifies a positive test result 94.1% of the time and a negative test result 98% of the time. The test was developed by California-based Lucira Health Inc. and will be available by prescription from a doctor.

The test, and others like it that may soon become available, is a game-changer in the fight against the coronavirus. It will allow almost anyone to test themselves at home. It will be particularly useful to those who are attempting to return to a worksite or to a school. It will, of course, have many other applications.

Lucira expects the test to cost $50 per use. It expects to have the tests widely available next spring after an initial rollout in Florida and California.

The ranks of the jobless increased by 742,000 for the week ending November 13. This was a surprising jump over the prior week and indicates that that labor market remains greatly troubled. Initial jobless claims remain well above what they were during any prior recession.

The good news is that the economy added 638,000 jobs and the unemployment rate fell to 6.9% in October. This rate is far below what the Federal Reserve and most economists anticipated in the summer. 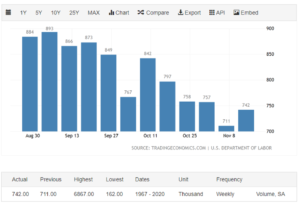 According to the Labor Department, the number of people collecting traditional unemployment benefits through state programs, which cover most workers, fell to 6.4 million for the week ending November 7. Other workers are collecting benefits through two important programs that Congress passed at the beginning of the pandemic to provide enhanced and expanded unemployment benefits. There are 4.4 million people on these programs. However, they are scheduled to expire January 1.

States provide unemployed workers 26 weeks of benefits. These benefits are typically extended when the economy is in recession and unemployment increases. In March Congress provided an additional 13 weeks of benefits and provided benefits for workers who are not typically covered by state unemployment benefits. This provided benefits for freelance and contract workers and people who were forced to stop working because of the pandemic.

If these programs are not extended, millions of unemployed Americans will struggle to make basic payments for housing, utilities and transportation. Deutsche Bank estimates that income would drop by $150 billion in the first quarter of 2021.

Other programs are beginning to lapse across the country, including rent abatement, mortgage forbearance, a suspension of student debt payments and tax relief for businesses.

It is clearly evident that the government needs to do more to assist people who have been impacted by COVID-19.

Unfortunately, the House, the Senate and the Trump Administration remain far apart on a new relief package.

The Democrats, led by House Speaker Pelosi and Senate Minority Leader Schumer, have been pushing for months a $2-$2.4 trillion package which would extend unemployment benefits and provide another $600/week supplemental benefit. Republicans want a smaller package of $650 billion that would increase the weekly payment to $300, but not renew the other expiring unemployment benefits. Senate Majority Leader McConnell has pointed to decreasing unemployment numbers to justify his position. Treasury Secretary Mnuchin has stepped back from the negotiations. He has suggested reallocating $455 billion in unspent small business lending funds to another coronavirus relief package. That would bring the Senate’s number closer to the House number.

President-elect Biden is urging both the House and the Senate to get a package passed before the end of the year and before he takes office in January.

The last chance for a package this year may involve linking it to legislation to fund the government. Current funding runs out on December 11.

With President-elect Biden about to take office, members of both the Senate and the House have begun conversations about a program for infrastructure (e.g. highways and bridges), technology and clean energy. There appears to be common ground and package could even pass this year. However, it is not clear how Congress would pay for it.

The Fed continues to express grave concern about the nation’s economy. Chairman Powell believes the coronavirus presents a serious threat to the country and that there are “significant challenges and uncertainties.”

The Fed got into a highly unusual public disagreement with the Treasury Department over several Federal Reserve lending programs that were initiated in the spring in response to the pandemic.

Treasury Secretary Mnuchin has indicated that programs that backed corporate credit, municipal lending and main street markets will end on December 31. The Trump Administration believes the programs have served their purpose and the need for them no longer exists.

President-elect Biden will undoubtedly revisit these programs when he takes over in January.

We desperately need to get in front of COVID-19. If we remain on the current trajectory, The Institute for Health Metrics and Evaluation (IHME) at the University of Washington projects that deaths could reach 500,000 by next February. In addition to the loss of life and human suffering, the nation’s economy and our way of life will be further impaired by actions taken to slow it.

As has been the case since the beginning of the pandemic, the virus is in charge. However, hopefully Americans will rally to this cause. Mitigation, treatment and vaccines are vital to winning the battle.

Keep the faith, be safe, stay healthy and have wonderful Thanksgiving holiday.