The Economy
For the 20th straight week, more than 1 million Americans filed for unemployment benefits. A total of 1.2 million people filed new claims last week, down from over 1.4 million for the prior week. The number of new claims is down significantly from the peak of more than 6 million in March, but it is still far higher than the pre-COVID record of 695,000 in 1982.

Congress continues to negotiate over an extension to the extra $600 per week in unemployment benefits (implemented in March, and which expired at the end of July), even as the economy is hammered by evictions, mortgage and credit card defaults, and crashing consumer demand.

Funds are also running out in the $660 billion Paycheck Protection Program, which Congress created to help small businesses keep workers on the payroll.

As we noted last week, the American economy shrank by nearly 10% from April to June, an historic contraction and a warning sign for what is at stake if the nascent recovery stalls. 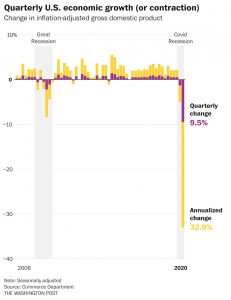 But even as the economy contracted at a record rate, some industries and sectors showed promise. Auto sales rose, likely because people are buying cars to avoid public transport. And the housing market has been strong, with wealthier Americans taking advantage of low interest rates to refinance or buy larger homes.

The Markets
The Dow Jones Industrial Average ended last week at 27,433, down just under 4% for the year to date, up roughly 50% from the March low, and down 7% from the most recent high.

The US remains an outlier – with only about 4% of the world’s population, we have more than 25% of the cases and over 25% of the fatalities. The total number of infections has doubled over the past 60 days.

The map below from Johns Hopkins continues to tell the story.

Nearly 100,000 American children tested positive for the coronavirus in the last two weeks of July, according to data from the American Academy of Pediatrics and the Children’s Hospital Association. That figure represents more than a quarter of the number of children diagnosed nationwide since March, and comes as children are coming together for the first time in months as some schools reopen their doors to students.

The Public Health
By now we all know that nearly every country has struggled to contain the coronavirus. But only one affluent nation has suffered a severe, sustained outbreak for more than four months: the United States.

America has a tradition of prioritizing individualism over government restrictions. That aversion to collective action led in part to inadequate state lockdowns and inconsistent adherence to mask wearing, based on partisanship instead of public health.

And, many experts agree, America’s poor results stem in substantial measure from the poor performance of the federal government. The administration’s travel restrictions were insufficient. Health officials initially gave confusing advice around wearing masks in public. And the president’s public statements — including claiming that the virus wasn’t serious and would disappear — regularly spread misinformation. In no other high-income country have political leaders so frequently departed from expert advice.

Together, skepticism toward collective action and the administration’s scattered approach have undermined the national response to the pandemic. True, the United States has made some improvements, including on mask wearing and testing. But unlike in South Korea, Germany and other countries, the virus continues to overwhelm daily life for Americans. 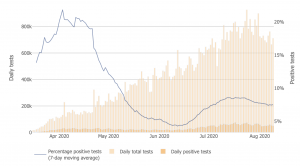 Over a 7-day period, more than one-third of the calls to people who tested positive in Los Angeles County weren’t answered. And of those who did answer, more than half refused to provide a single close contact.

The frustration for many experts is that this outcome was avoidable. As one said: “This isn’t actually rocket science. We know what to do, and we’re not doing it.”

The Way Forward
As the economy has reopened, daily cases have reached record highs. And public health officials have been warning that there could be a second wave of coronavirus infections in the fall, coinciding with the flu season. The changing demographics of the latest outbreaks across the country, combined with inconsistent mitigation strategies by states, are making it more challenging for scientists to predict when the new upward curve may start to level out.

But, as has been the case since the virus arrived in the US and was identified as highly contagious, we largely have our destiny in our own hands. To the extent we’re willing to follow the recommendations of our public health officials:

we should be able to dramatically slow the spread of the virus, and eventually bring it under control.

If not, we’re likely to face what CDC Director Dr. Robert Redfield has referred to publicly as, “… probably one of the most difficult times that we’ve experienced in American public health”.