You’re a Recent Widow: Now What? These are the Money Topics You Should Consider 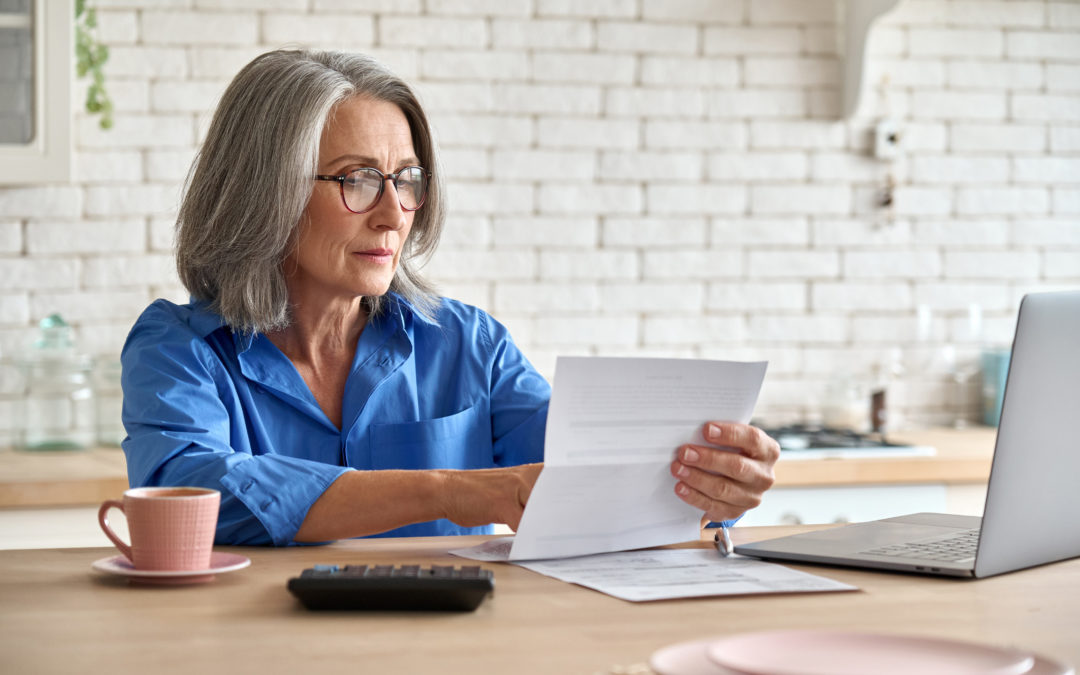 Erika seems to be slowly recovering from the recent loss of her husband of 43 years to the coronavirus. While John was 74 years old, he had no underlying health conditions. In fact, he was remarkably fit and took very good care of himself. They are still not sure how John contracted the virus. But after battling it for over three weeks at the beginning of the year, he passed away. It was a particularly brutal experience for their family, because Erika and their children and grandchildren were able to spend very little time with John in the hospital due to safety protocols.

Erika and John met in the mid-1970s through a mission trip to Guatemala which was sponsored by the Presbyterian church they both attended. Erika was working as paralegal for a small law firm and John was starting his career in administration at the local state university. They fell in love and married.

They welcomed their son, Brad, into their lives a few years later. Their daughter, Jennifer, was born a few years later. Erika and John spent the next two decades raising their children. John advanced in his career and eventually became provost before retiring at age 65. Erika left the workforce to raise their children and volunteer in the community. She had various part time jobs over the years before retiring when John did.

John handled their financial affairs and when they retired, while not wealthy, they were comfortable. They were diligent savers and they received some inheritances from their parents. John had a pension from the university that was paying $60,000 a year. They were receiving $50,000 in Social Security. John had an IRA worth $1.1 million (after rolling his 403(b) savings account at the university). He also had a Roth IRA with $350,000. Erika had an IRA with $125,000. They had a brokerage account with $1.3 million. Their home was paid off and they owned a small cabin in the mountains which was on Forest Service land. John owned a whole life insurance policy with a death benefit of $450,000.

Erika was referred to us by another client. They knew each other through their involvement in the SMART Reading program. During our complimentary initial visit with Erika, she told us that she had relied on John to keep their finances in order. He told her over the years that they would never have to worry about money and she believed him. But, now that he was gone, she was not sure what she should do. We discussed how we serve widows in similar circumstances and, after interviewing a few other advisors, Erika hired our firm to serve her.

What follows is a brief overview of the various ways in which we have assisted Erika.

Before John passed, he and Erika, were both taking Social Security. John had waited to age 70 in order to maximize his benefit. Erika took her benefit at age 65, as it was relatively small and they did not want to wait to receive a (only slightly) larger benefit.

We explained to Erika that, while she would no longer receive the same benefits that she and John had been receiving together, she would receive his (higher) benefit for the rest of her life. The result is that her income from Social Security went from $50,000 to $40,000. She asked about how she would make up that loss in income and we explained that she would be able to access her other resources.

When John retired, he elected the 100% joint and survivor pension option. That resulted in a lower pension than he would have received, had he taken the single life option. But it insured that Erika would receive 100% of the pension if John predeceased her. So, while her Social Security income dropped, her income from John’s pension remained the same. She was relieved to learn this.

John was taking required minimum distributions (RMDs) from his IRA which started when he turned 70. The rules have changed since he did so. IRA owners can defer distributions to age 72.

Erika asked about these distributions. She was the beneficiary of John’s IRA. We explained that she could roll John’s IRA into her IRA. She would not be required distributions from her IRA until she turned 72.

John and Erika had not been taking distributions from John’s Roth IRA. He had told her that they did not need the money and that it would likely end up transferring to their kids after they had both passed.

Erik was also the beneficiary of John’s Roth IRA. We explained to Erika that she could transfer the Roth IRA into her name and defer taking distributions. There are no required distributions for a beneficiary who is a surviving spouse. Erika was relieved learn that she would not be required to take distributions from this account as she hoped it would eventually go to her children.

Erika will need to name new beneficiaries for her retirement accounts. This would also apply, if she owned life insurance, annuities or accounts with payable on death or transfer on death designations.

John had been managing their investment brokerage account. The account included a mix of low-cost index funds, several technology company stocks and some actively-managed bond funds. Erika told us that she did not know much about the holdings in this account and was not sure how John had picked them.

This account was held in a living trust that John and Erika set up many years ago. We explained to Erika that she would need to consult with an estate planning attorney about the tax status of the account. Depending on how their estate plan was structured, it was likely that one-half of the account would receive a step-up in basis for tax purposes.

The IRS allows a widow to file a joint tax return in the year of her spouse’s death. In the following years, she would need to file as a single person. The joint filer tax rate brackets are higher than the single filer brackets. This means that tax planning is very important for widows in the year of the spouse’s death.

We asked Erika about tax withholdings from the pension income, Social Security benefit payments and retirement account distributions. She told us that John took care of this. In general, filers must send the IRS 90% of their total tax for the year by December 31. We encouraged her to contact their tax professional and make certain that appropriate withholding and estimate tax payments have been made and will be made in the future.

We discussed the idea of converting dollars in traditional IRAs to Roth IRAs. This involves paying taxes on the withdrawal from the IRA and then transferring funds to the Roth IRA. Given that Erika will be able to file a joint tax return for this year, it might be advantageous to do a conversion before the end of the year.

Erika told us that she planned to stay in the home that she and John shared. We noted that if she decided to move, the taxation of gains in the value of the house would depend on when she sold the house. The IRS would allow Erika a $500,000 gains exemption if the property sells within two years of John’s date of death (and has not remarried). After that, the gains exemption would be $250,000.

While John and Erika had a trust to hold the majority of their assets, we advised Erika that should plan to file an federal estate tax return for John. This will allow her to receive any unused federal estate tax exemption and it to her own. She has two years from the date of John’s death to claim the unused exemptions.

Because Erika lives in Oregon, we told her that she would also need to file an Oregon Estate Transfer Tax Return for John. In Oregon, jointly held assets like the home or brokerage account receive a 50% step up in cost basis after one partner dies. Had John and Erika lived in California or Washington, the step up on jointly owned assets resets the cost basis to 100% of the fair market value after the spouse’s death.

Before we met Erika, she had submitted a death claim to the life insurance company for John’s whole life insurance policy. She told us that the claim was being processed and she expected to receive the proceeds in the next several days.

We learned that John had owned this policy and that Erika was his beneficiary. We explained to Erika that she would receive the proceeds from the policy free of income taxes.

Erika asked us what she should do with these dollars. We explained that they should be included in an investment program that we would develop with and for her.

John and Erika had developed a very comprehensive estate plan many years ago. They had a living trust, wills, durable powers of attorney and health directives.

Their estate plan generally left everything to the survivor. After they both passed, it indicated that Brad and Jennifer would receive their resources.

In the years that followed, Brad (now 35) married and started a family. He is a successful patent attorney. He and his family live in the Research Triangle in North Carolina.

Jennifer (age 32) had not married and did not have kids, but she lived with a same-sex partner. She works in the entertainment industry in Los Angeles and lives in West Covina. She has struggled financially.

John and Erika’s estate plan did not reference Brad’s kids.

We explained to Erika that, with John having passed, it would be good for her to update her estate plan. There were lots of things to consider. Did she want to maintain the terms of their living trust? Did she want to change the beneficiaries? Did she want to specifically include Brad’s kids? Did she want to do more to help Jennifer? Were there charities she wanted to include? Who should be the trustee upon her passing?

John and Erika were both on Medicare with a Medicare Supplement or Medigap policy. They were paying premiums based on their status as married filing a joint tax return. We advised Erika that her Medicare premiums might change once she transitions to filing an individual tax return.

Erika mentioned to us that her father had died at age 75 from Alzheimer’s disease. Her mother is 94 and living in a memory care facility.

Erika expressed her concern about one day needing care as her father did before he passed and as her mother does now. We told her that we could model a scenario in which she needed care at the end of her life. We could then determine how best to pay for that care. Should she plan to use her existing resources? She should she buy long-term care insurance?

During our first conversation with Erika, we explained that she would benefit from integrated, comprehensive financial planning. Such planning for a woman in her situation includes cash flow planning, insurance planning, investment management, income and tax planning and estate (and charitable giving) planning.

We told her that we would work with her other advisors (e.g., CPA, estate planning attorney, insurance agents) to address her planning needs and objectives. The overarching goal would be to give her peace of mind about money and help her use her resources as she and John had always intended.

If you need to help with planning after losing a spouse, consider working with a Certified Financial Planner™ (CFP®), Certified Public Accountant (CPA) or a Chartered Financial Consultant® (ChFC®). . Advisors who hold these designations had to meet rigorous educational, experience and ethics requirements.

If you’re looking for help with financial planning after a significant life change, contact us today to see how our team at Springwater Wealth can help you.