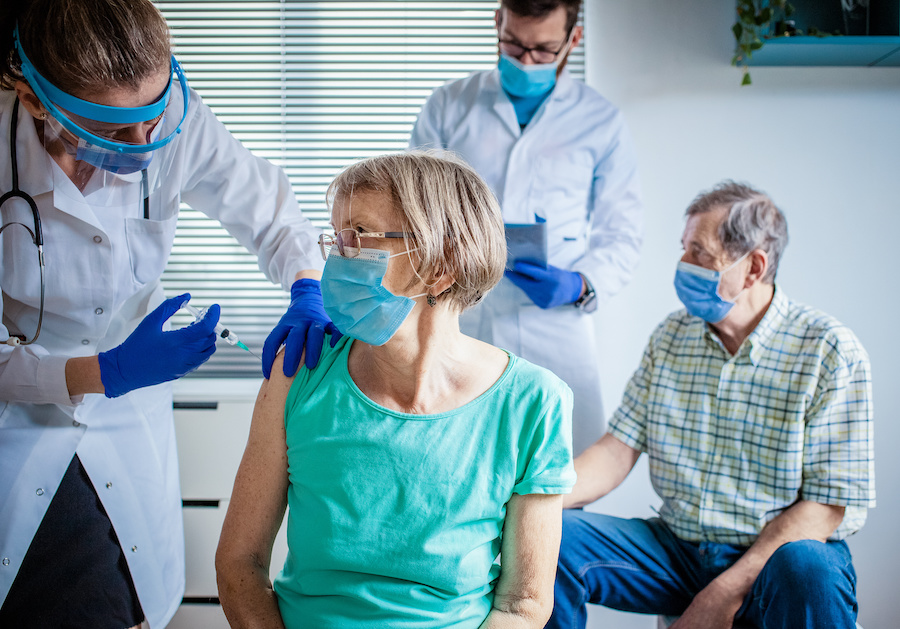 The pace of vaccinations continues to accelerate across the country

After a marathon debate session that lasted over 24 hours, the Senate on Saturday approved the American Rescue Plan along party lines. The Senate’s version of the bill differs from the House version passed last week. Most notably, the Senate version eliminates an increase in the minimum wage to $15 per hour, and reduces the number of people who will qualify for a $1,400 stimulus payment (see more below).

The House will now have to agree to the changes before the bill can be signed by the president.

Here are some of the Senate Plan’s highlights:

Stimulus Checks
Sends up to $1,400 in addition to the $600 payments sent in December.

Approximately $400 billion of the $1.9 trillion plan is allocated to these stimulus payments. The eligibility phase-outs for these payments are more stringent than under the Administration’s initial proposal and the House’s bill.

Child Tax Credit
Most Americans would receive $3,000 a year (in a series of periodic payments) for each child aged 6 to 17, and $3,600 for each child under 6. This is a major expansion of the existing child tax credit, which currently provides $2,000 a year for children from birth through age 16.

Aid to State and Local Governments
Designates $350 billion of the $1.9 trillion for states, cities, tribal governments and US territories.

As of last week, The Institute for Health Metrics and Evaluation (IHME), an independent global health research center at the University of Washington, is projecting that fatalities in the US will rise to between 567,000 and 641,000 by July 1.  The variance is based on the rate of adoption of various mitigation strategies like universal mask wearing, and the spread rate of more transmissible variants.

The testing rate has improved steadily since the fall. After a second peak of nearly 15% at the start of the year, the positivity rate continues to trend downward. 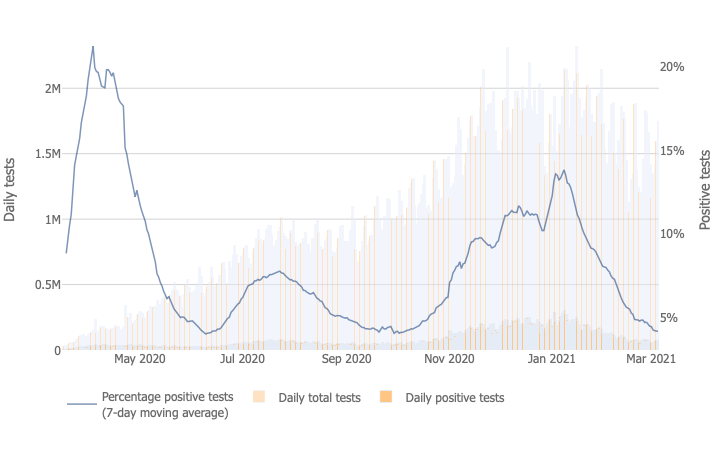 The daily number of cases is as low as it has been in months. But after weeks of steep declines, progress has slowed nationally and some cities are regressing.  For example, New York City and Miami are experiencing persistently high case counts while much of the country is reporting major improvement.

Dr. Anthony Fauci, the country’s leading expert on infectious diseases, over the weekend expressed his concern about the US coronavirus case count apparently plateauing at an “unacceptable level” of 60-70,000 per day. Alluding to the decisions by Texas and Mississippi to fully reopen their economies and remove mask mandates, he warned against public health measures being turned “on and off” and said a new surge of cases from this baseline would be risky. 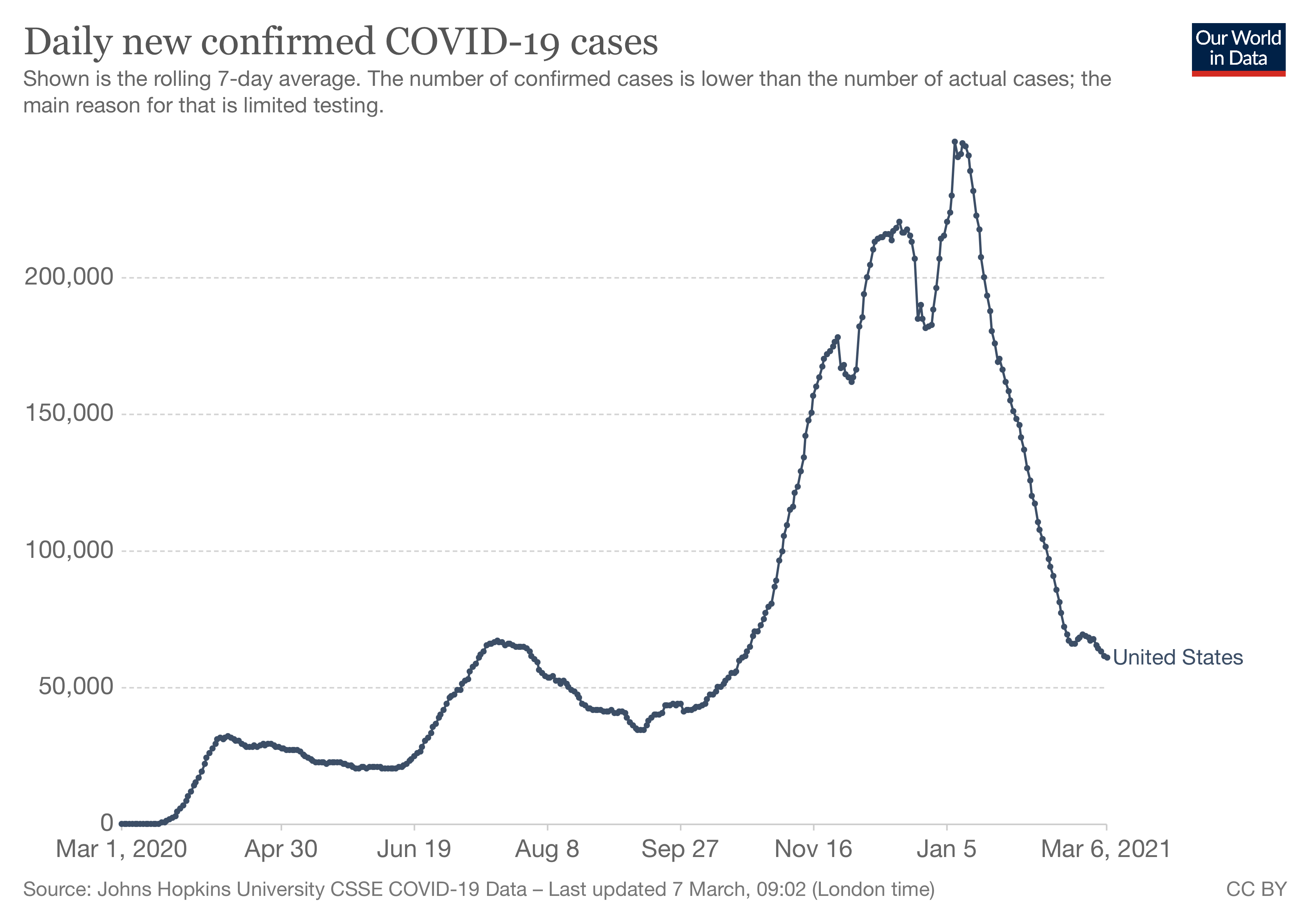 The number of Americans hospitalized with COVID is now down to about 40,000, which represents a decline of more than 60% in just two months. 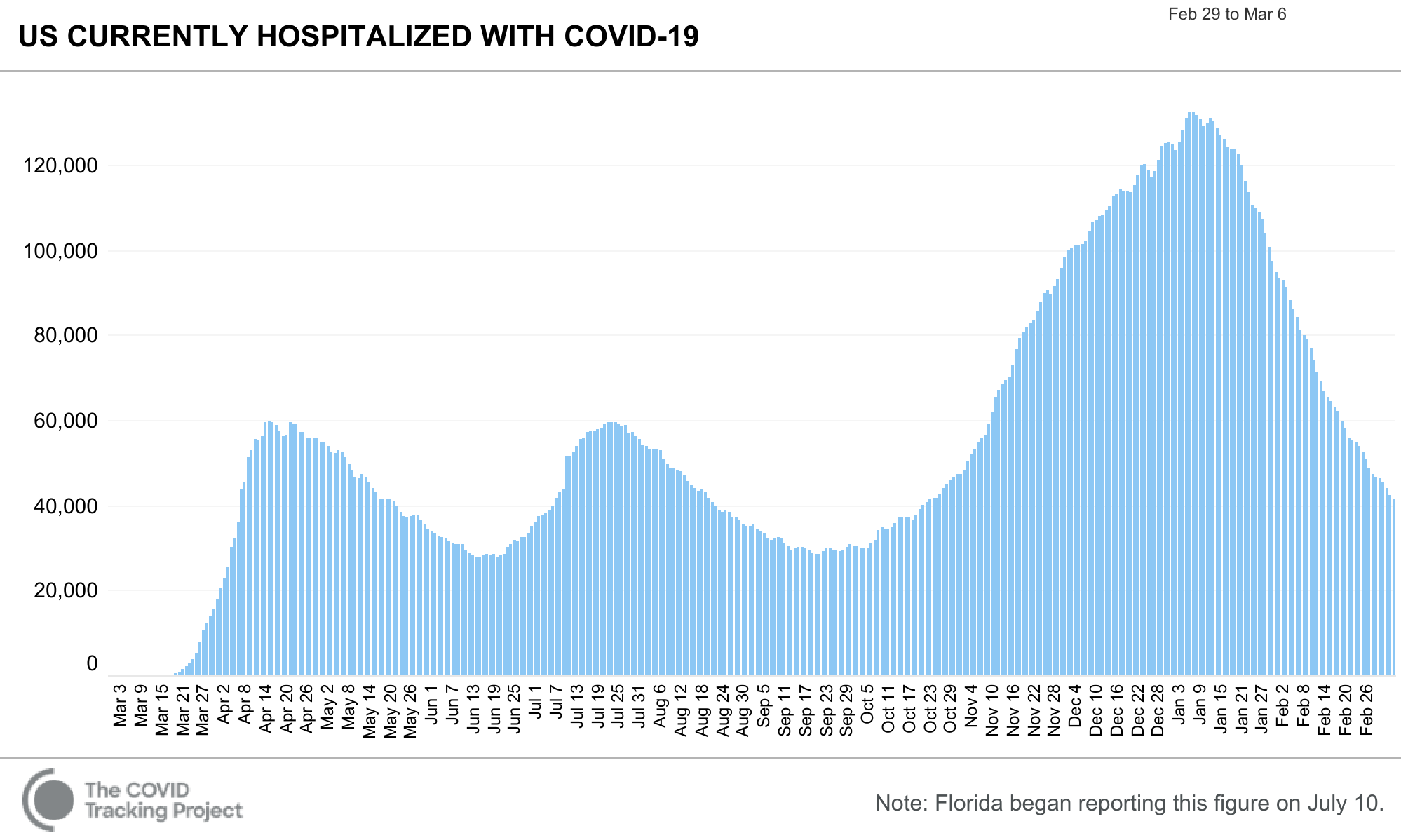 The number of daily deaths unfortunately remains stubbornly high, and appears to be plateauing at just under 2,000 per day. With the case count of more contagious variants exploding across the country, public health experts are warning against relaxing physical distancing and face mask mandates that some states are announcing.

For the first time, the country is administering more than 2 million vaccine doses on average each day. As the newly approved Johnson & Johnson vaccine is distributed, that number should increase. The Biden Administration has announced that it expects to have sufficient vaccine doses foe every adult American by May.

The challenge remains distribution. For example, in Portland, Oregon, where Oregon Health & Science University (OHSU) is responsible for running a mass vaccination site at the Portland International Airport, hundreds of Oregonians waited hours for their scheduled appointments. OHSU attributed the gridlock to a big increase a surge in the number of vaccinations offered and people showing up too early or too late for their appointments.  Ultimately, they hope to be able to offer up to 10,000 per day at the site, though presently no more than half that number are possible.

The chart below shows the number of vaccine doses administered on a per capita basis across a select group of countries.  When compared with a few weeks ago, America’s performance has improved dramatically. 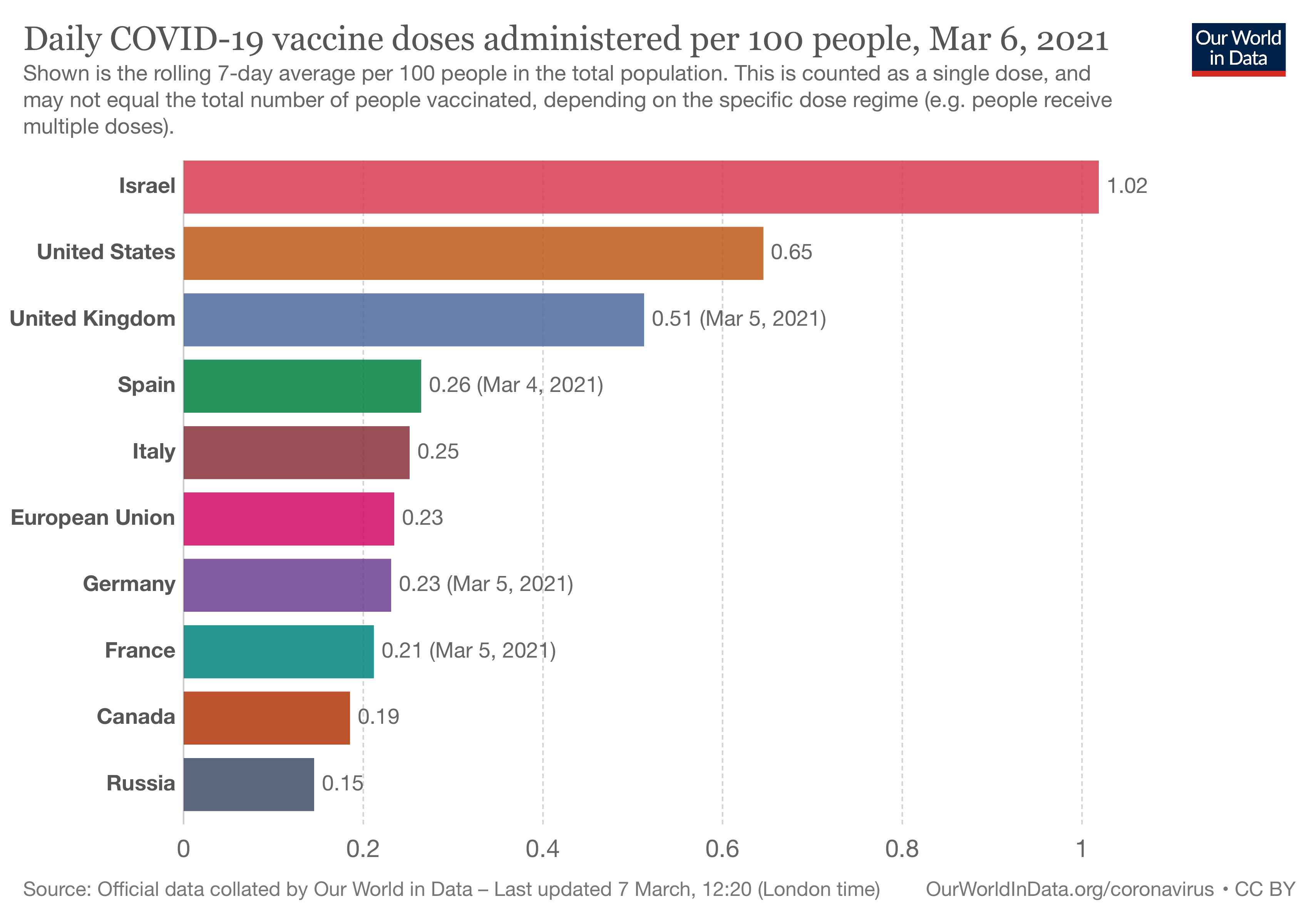 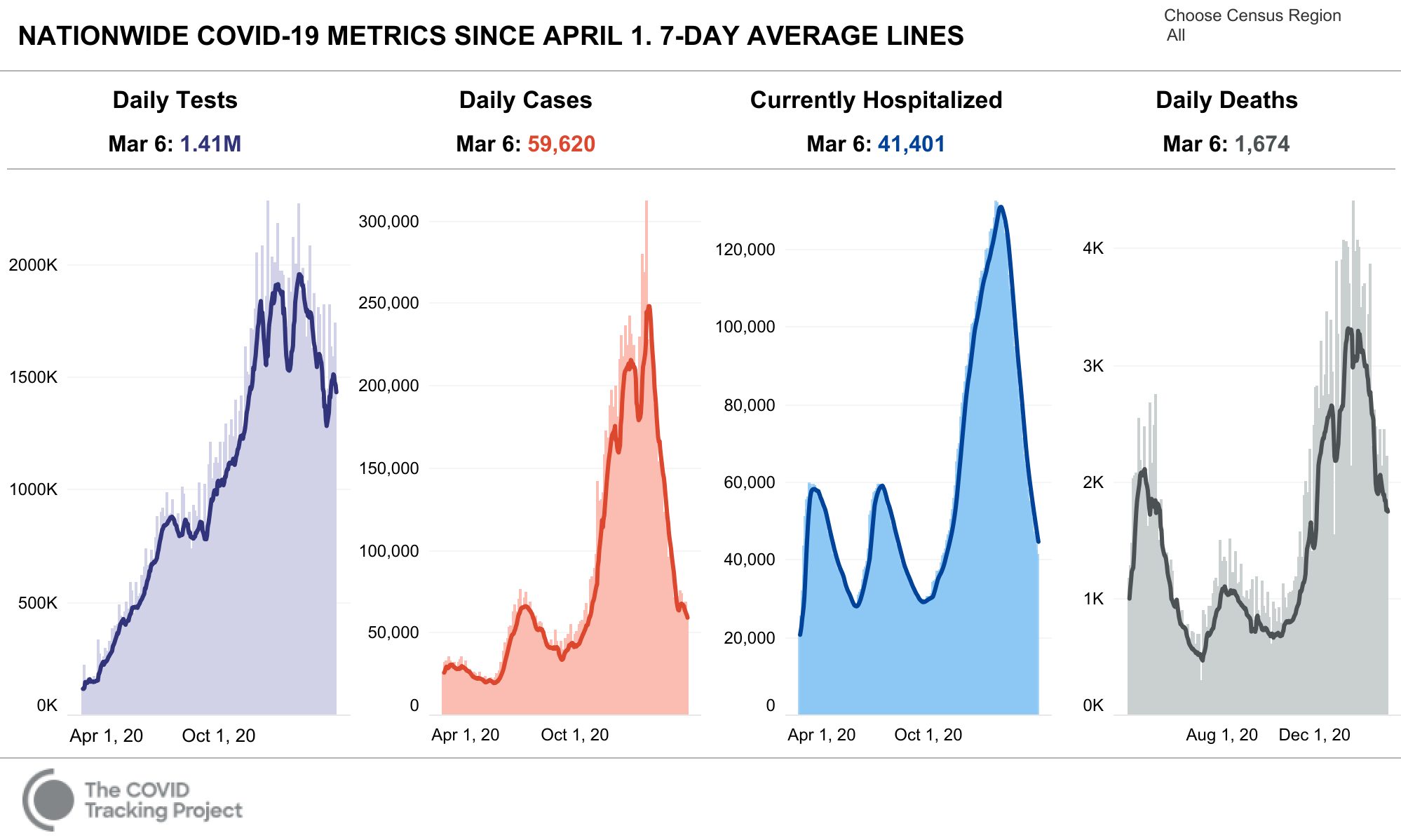 Last week, the yield on the benchmark 10-year US Treasury note briefly climbed above a one-year high of 1.6% before dropping back slightly. A strong jobs report boosted expectations of a stronger economic recovery and a tick up in the inflation rate in the coming months.

The chart below shows the movement in the benchmark 10-year note: 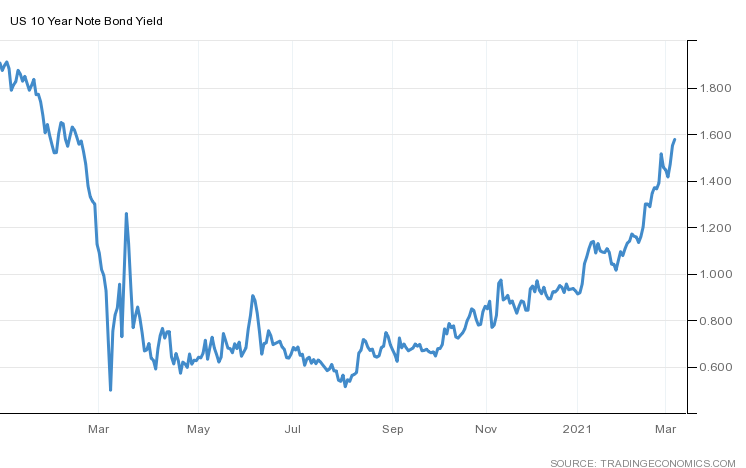 Oil prices rose, too, last week, hitting their highest levels in over a year. OPEC and its partners agreed not to increase supply in April, and instead to wait on a more predictable and stable improvement in demand. Economists have raised their price forecasts for Brent crude to $80/bbl in the 3rd quarter of 2021. For perspective, Brent traded at below $20/bbl in the spring of 2020. 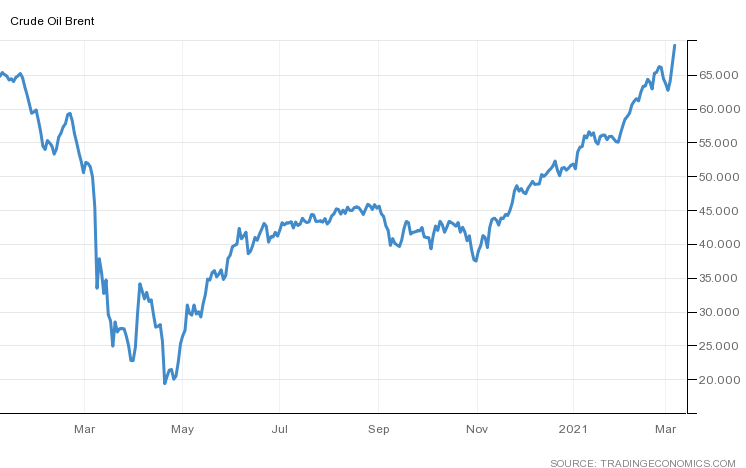 The US economy added 379,000 jobs in February, significantly higher than the revised figure of 166,000 in January, and well in excess of forecasters’ expectations. Relaxed restrictions on businesses, falling coronavirus infection rates, an accelerating rollout of vaccines, and continued governmental support all contributed to the better than expected result. Most of the job gains were in the leisure and hospitality sectors.

The number of Americans filing for unemployment benefits rose slightly to 745,000 for the week ended February 27th, from the previous week’s revised figure of 736,000. In addition, about 437,000 people applied for help from the Pandemic Unemployment Assistance scheme, which covers workers that do not qualify for initial claims, up slightly compared with 427,000 for the prior week.

The economy is still short about 9.5 million jobs compared to February 2020, and so the labor market still has a long way to go before fully recovering to its pre-pandemic level.

It appears we’re very close to turning the corner on the pandemic that has wreaked havoc on our families, our friends, and the economy.  A sustained combination of accelerating vaccinations and continued physical distancing and other mitigation measures may be enough to finally put this behind us.