Air dropping retardant in a battle against the growing fires

It was a stunning week for residents of the West Coast. We have endured record-breaking fires that have displaced tens of thousands (including many of my family members), burned thousands of structures, and killed dozens of people and countless animals. Entire towns have been destroyed and many residents remain unaccounted for.

In Oregon, 40,000 evacuated their homes, 290,000 were at Level 1 for evacuation, 160,000 were at Level 2, and 95,000 were at Level 3. In California, fires have burned over 2 million acres and, as we have learned from the recent past, the fire season in the Golden State runs well into the fall. In fact, officials in California have said that there really is no longer a “fire season” in the state. Fire is possible at any time of the year due to a historic drought and rising temperatures.

There were over 100 major fires burning in in the West over the weekend, many 0% contained, and the resulting smoke blanketed a region from British Columbia to Baja California and spread from far out on the Pacific across the United States. Here is the Fire and Smoke Map from AirNow. 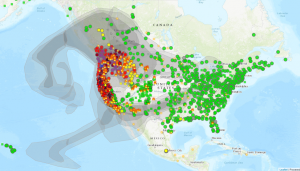 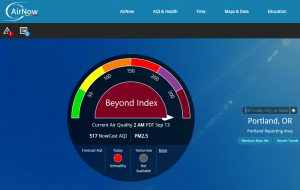 It is apparent that we have entered a new, alarming era in which fire will be a constant in our lives.

Oil traded at $37.58 for the October 2020 futures contracts of a barrel of West Texas Intermediate crude. Oil is down over 34% for the year as shown below:

The Economy
The nation continues to struggle to recover from the economic impact of COVID-19. The Federal Reserve Bank of Atlanta projects that the US economy will expand at 7% in the current quarter. This follows a record-breaking contraction of 9.1% in the second quarter. Economists expect the economy to grow at a rate of 1.25% in the fourth quarter and return to normal pre-pandemic levels in 2022.

The Virus
We shall see what happens. The virus is in charge and our ability to manage it will drive the economic recovery. We continue to struggle with sufficient testing and securing test results in a timely manner.

It would appear, based on reliable reporting, that scientists with several large pharmaceutical companies are making good progress in the development of a vaccine. However, it is not likely that such vaccines will be widely available before some time well into next year. In fact, as we have seen with testing supplies, the distribution of the vaccine represents one of the greatest logistical challenges in human history.

COVID-19 Numbers
Globally, across 213 countries and territories, there have been over 29 million confirmed cases and over 924,000 deaths. In the US, over 6.5 million have been infected and over 194,000 have died.

Americans across the country continue to bend the curve in the right direction: 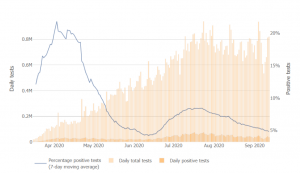 The number of deaths in the US remains elevated relative to our advanced nation peers. We seem to have reached a constant state and this is unnerving as we enter the fall, a period that may bring an increase in infections. 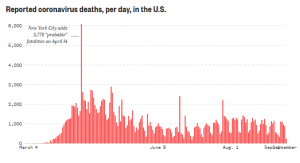 The Labor Market
Because we have not been able to corral the virus, the labor market continues to struggle.

Application for US state unemployment benefits increased by 884,000 for the week ending September 6, 2020. 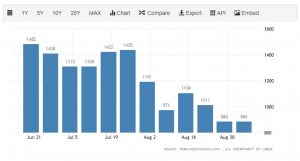 The number of workers claiming ongoing unemployment benefits increased by 93,000. There are 13.4 million receiving benefits as of the week ending August 29, 2020.

There are 29 million Americans receiving some form of jobless support: 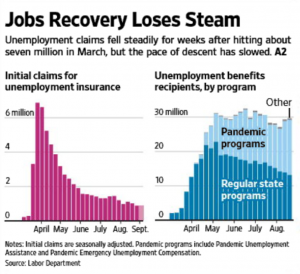 These numbers are higher than economist expected and indicate that employers are struggling to return to pre-pandemic staffing levels. We can see job posting activity in this chart: 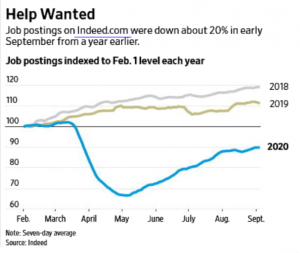 The current unemployment rate is 8.4%.

Payroll Tax Deferral
The president’s program to provide payroll tax-deferral has not been well received. Few companies have implemented it, because of logistical challenges and because the deferred taxes will need to be paid unless Congress agrees to forgive them. Federal government employees and members of the military have been entered into the program, despite resistance from leaders in various agencies and the military.

Coronavirus Financial Aid
It is becoming apparent that Congress will not pass an additional package of support for individuals and businesses suffering from the impact of the virus before the November election. Progress on a fifth package ground to a halt when Democrats blocked a Senate Republican effort to pass a program that, at $300 billion, was much smaller than the House passed several weeks prior.

This inaction is troubling, because the Federal Reserve and many leading economists have indicated that the economy’s recovery will continue to sputter unless Congress provides additional support.

Treasury Secretary Mnuchin and House Speaker Pelosi will now focus on passing a spending bill that will keep the government from shutting down on October 1.

The Budget Deficit and the National Debt
The nation’s budget deficit is currently $3 trillion through 11 months of the fiscal year, according to the Treasury Department. This is double the record for this period ($1.37 trillion in 2009). The Congressional Budget Office (CBO) is forecasting a deficit of $3.3 trillion for the full 2020 fiscal year. It was $984 billion in 2019. The CBO forecasts that the deficit will be 98% of the nation’s economic output (GDP) in 2020 and 100% in 2021. For perspective, the deficit was 35% of GDP in 2007 in the Great Recession.

The good news, if you can call it that, is that the cost of servicing the debt has actually dropped. The US has spent $484 billion, 10% less than last year, servicing the nation’s debt so far this year. This is directly attributable to extremely low interest rates which make it less costly for the government to borrow. The Federal Reserve has interest rates pegged to just above zero and has committed to leaving them there for an extended period.

Parting Thought
It has been a year that will undoubtedly enter the history books: global pandemic, stock market crash and recovery, record unemployment, economic recession and recovery, racial unrest, riots, destruction of property and looting, and, now, unprecedented fires. And the presidential election looms.

Yet, we march onward.