The Virus Accelerates in the US 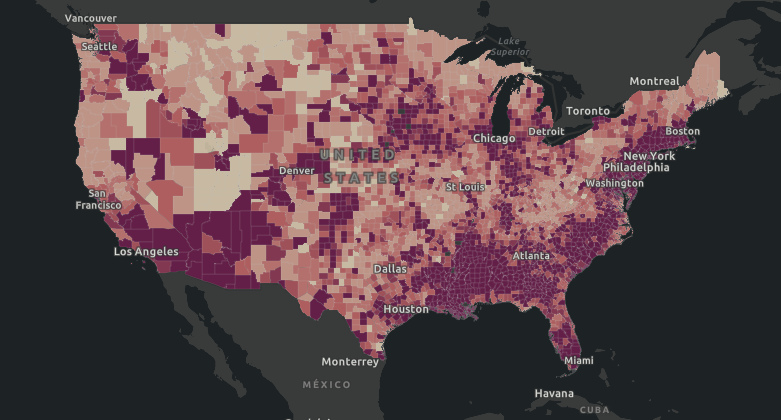 COVID-19 cases in the US

If you’re contemplating a summer vacation to Europe, you’ll likely need to make other arrangements. In a bit of irony, it’s very likely that, effective July 1, the European Union will bar Americans from entering the continent until the United States better contains COVID-19. It was just a few months ago that the Trump administration blocked travelers from China, first, and then Europe from entering the US. Given how dependent European countries are on American tourism, the move is a sobering reminder of the virus’s presence in our country.

COVID-19 Numbers
Globally, across 187 countries, there have been nearly 10 million confirmed cases and over 500,000 deaths. In the US, over 2.5 million have been infected and over 125,000 have died. The Unites States has over 25% of the cases in the world, but has only 4% of the world’s population.

There were over 40,000 new cases nationally for three straight days. These are the highest daily case counts since early April. In response to the spread of the virus in their states, governors in Florida and Texas are reversing course on some of their reopening measures.

The Centers for Disease Control and Prevention believes that as many as 20 million Americans may be infected. That would mean that there are millions of carriers who have no or mild symptoms.

The Markets
The markets sold off Friday as investors are increasingly nervous about the country’s ability to both reopen and contain the spread of the virus.

The Economy
The US economy shrank by 5% in the first quarter, according to the Commerce Department. Economists expect the economy to shrink by as much as 30% in the second quarter.

The ranks of the unemployed continued to increase, with 1.48 million new unemployment claims in the week ending June 19. Another 728,000 self-employed and “gig” workers filed for benefits under a special unemployment program. There are 19.5 million Americans receiving unemployment benefits.

There are signs that the economy is healing. Orders for durable goods (i.e. those that last at least a few years) increased 16% in May. Household spending on goods and services increased 8.2% in May. However, the savings rate remains unusually high, an indication that Americans are still very nervous about the economy and their job security.

Benefits Expiring
One of the threats to the nation’s recovery from the virus is the expiration of government stimulus payments (one-time payments of $1,200 for individuals and $2,400 for couples) and enhanced (an additional $600) weekly jobless benefits. These benefits expire at the end of the July. We know that these payments were quickly pumped into the economy by lower- and middle-income households who spent them soon after they were received.

It’s not clear what will happen if Congress fails to pass another relief package. With nearly 20 million people unemployed, we can assume that the expiration of jobless benefits will have a significant economic impact on many Americans, particularly those on the lower end of the wage scale. The Brookings Institute estimates that more than 35% of all workers in the bottom 20% of the wage scale lost their job.

Looking into Summer
The markets are typically relatively quiet in the summer. Investors and traders often work shortened weeks and take extended vacations. Trading is usually fairly light. But this year will be different and not just because a presidential election looms in November.

COVID-19 will be the focus of attention. If the rates of infection, hospitalization and death continue to accelerate, investors will shift to a “risk off” stance. They will abandon the stock market and head for safe havens like government bonds and gold.

The country does seem better prepared to manage the pandemic. The volume of testing has improved. Counties have significantly increased their ability to contact trace. There are procedures to isolate and quarantine those who are infected with mild symptoms and those who have been exposed to the virus but who are asymptomatic.

Hospitals have adequate capacity (with the exception of a few hot spots in the sunbelt) and PPE (personal protective equipment).

Aerosol Spread – A Personal Anecdote
There is considerable scientific evidence which indicates that COVID-19 may spread in the air. Specifically, the virus may be transmitted significant distances through tiny particles that are suspended in the air, rather than droplets which fall to the ground. I got to thinking about this while hiking up the Mt. Defiance trail in the gorge over the weekend. I left the trailhead at 6:15 am and did not expect to see anyone until I was headed back down. However, after about an hour of hiking, I suddenly smelled a distinct scent. It reminded me of hairspray or body spray. Yet, there was no one in front of me and I heard no one. However, seconds later, I turned a corner and saw a woman about 15 feet in front of me. The scent had come from her and, as soon as I passed her, I no longer smelled it. The experience made me wonder about boarding an airplane, returning to my gym and dining in a restaurant.

A Note About Our Communications
As we close out the second quarter of 2020 and enter the summer months, we will be transitioning to weekly correspondence with you. Please look for our next update on Monday. We will, of course, communicate more frequently if the circumstances warrant.