The Nation Careens Toward the Election

It’s been challenging to keep track of all of the incredible events that are taking place as we move closer to election day on November 3. We’ll attempt to confine our commentary to events that have a direct bearing on the economy and the investment marketplace.

We’re focused on the prospect that there won’t be an additional coronavirus economic support package before the election. The House, under Speaker Nancy Pelosi, had been pushing for additional measures for months. However, President Trump’s administration has been erratic in its position regarding a new aid program.

The Senate appears to be unwilling to agree to the large package proposed by the House and it has now begun to turn its attention to the confirmation process of Supreme Court nominee Amy Coney Barrett. Negotiations continued over the weekend. But the prospects for a deal were not encouraging.

The Federal Reserve
If you’ve followed the Federal Reserve over the years, you’ve probably noticed that Chairman Jerome (“Jay”) Powell has been more outspoken than his predecessors. In the past the Fed has kept its comments fairly confined to monetary policy. But this crisis is different, in that Powell and other leaders within the Federal Reserve have repeatedly and rather publicly indicated that Congress and the White House need to do more to support the economic recovery.

Last week, the Fed Chair, speaking at a virtual conference of private sector economists, said that “too little support would lead to a weak recovery, creating unnecessary hardship.” The Federal Reserve has providing trillions of dollars in various forms of monetary support for the economy.

COVID-19
Globally, across 213 countries and territories, there have been over 37 million confirmed cases and over 1 million deaths. In the United States, nearly 7.8 million have been infected and nearly 215,000 have died.

There has been an increase in infections in several states across the country,
including in Oregon. The nation just logged over 50,000 cases per day for three straight days and the 7-day average of new cases has been greater than 14-day average in 31 states. These are indicators that the virus is spreading at an increasing rate.

Health experts have expressed concern since the pandemic began that there could be a resurgence of the virus in the fall as occurred during the Spanish flu outbreak just over 100 years ago. We are now seeing this in the United States, as well as in several countries in Europe. Time will tell how serious this uptick in infections becomes.

Fortunately, testing has increased significantly (see image below) and contact tracing is improving. Also, a larger share of the infections is among younger people who are more likely to shake the virus than older people and those who are health-compromised. 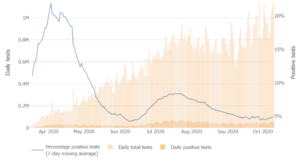 This image shows that the number of deaths in the US has leveled off. However, the death rate in the US remains higher than many other countries. 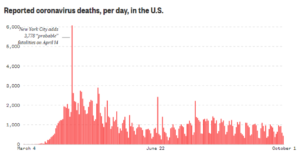 If you are curious about what is happening around the world, check out this interactive map (below) at Our World in Data (click on the link for the interactive map). 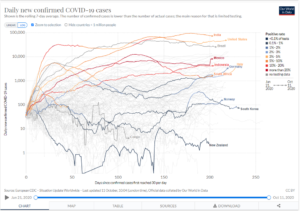 The Labor Market
The recovery in the labor market has stagnated. The Labor Department reported that new jobless claims registered at 840,000 for the week ending October 2, 2020. To put this in perspective, the weekly high before the coronavirus pandemic was 695,000 (in October 1982) in records that date back to 1967.

Claims for pandemic unemployment assistance were 464,000. This is a program for workers who aren’t eligible for regular benefits (e.g. self-employed and gig workers). There are 11 million receiving unemployment benefits as of the week ending September 26, 2020. The Bureau of Labor Statistic reports that the current unemployment rate is 7.9%. The number of unemployed workers was 12.6 million.

Vaccinations & Treatment
While we do not yet have a vaccine in the US and it’s now clear that we won’t have one before the election, it is becoming clear that treatments for COVID-19 have advanced significantly. We’ve seen several high-profile individuals, including the President, contract the virus, receive treatment and, fairly soon thereafter, resume their lives. So, even if we must wait longer for a vaccine, we can be encouraged that our health care system has become much more effective at treating individuals who become infected.

Further, it looks likely that there will be several vaccines that make it through late-stage trials and ultimately receive approval from the Food & Drug Administration. Under Operation Warp Speed, the federal government intends to “produce and deliver 300 million doses of safe and effective vaccines with the initial doses available by January 2021, as part of a broader strategy to accelerate the development, manufacturing, and distribution of COVID-19 vaccines, therapeutics, and diagnostics.”

Looking Toward the Election
Barring further surprises, we do not anticipate that the markets will move much over the next three weeks in the run-up to the election. Several market indicators are suggesting that there is a growing consensus that Vice President Biden will win the election and that investors are coming to grips with the policy changes that his administration will likely bring.

Nonetheless, October is known by investors for its surprises. Furthermore, we remember what the polls suggested four years ago in the days before the last national election.