The Increasing Promise of Vaccines, and a Grim Milestone 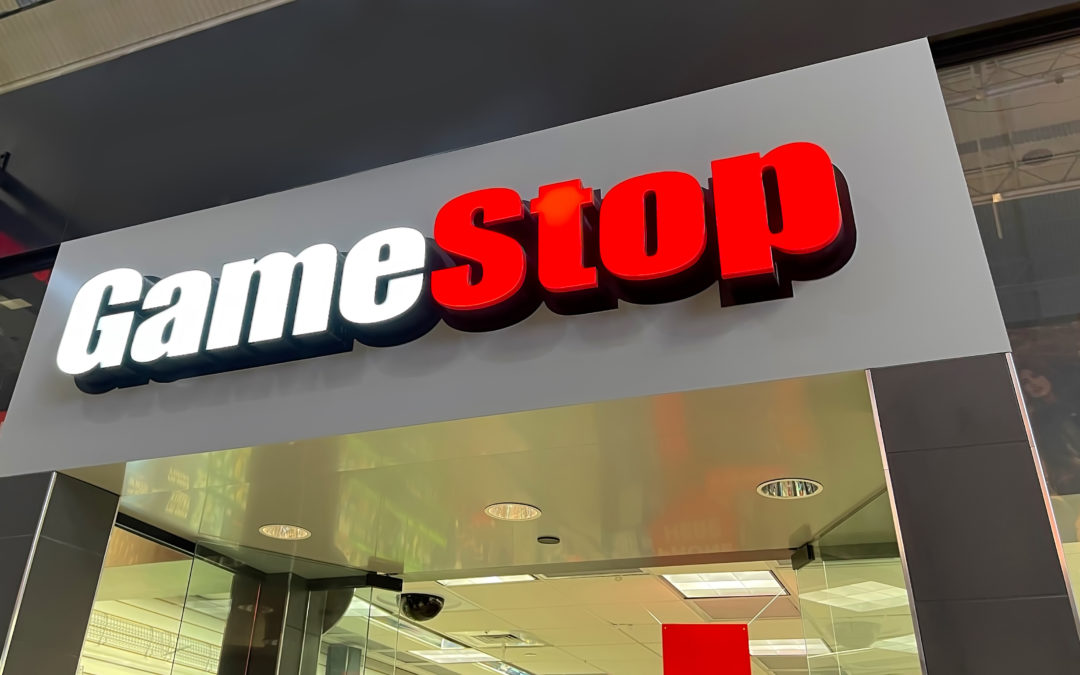 “A Conversation about Annuities”

Last week, we hosted the latest in our series of conversations with specialists in their field. Our guest was John Lenz of Lenz Financial. John is a nationally-recognized expert on the complex subject of annuities.

Our conversation touched on how to tell a “good” annuity from a “bad” one, whether buying additional riders to an annuity contract make sense, and how lifetime income from an annuity can strengthen your retirement plan.

You can view a recording of our conversation with John on Springwater’s YouTube channel, or on the Videos page in the Resources section of our website, together with a library of past videos. 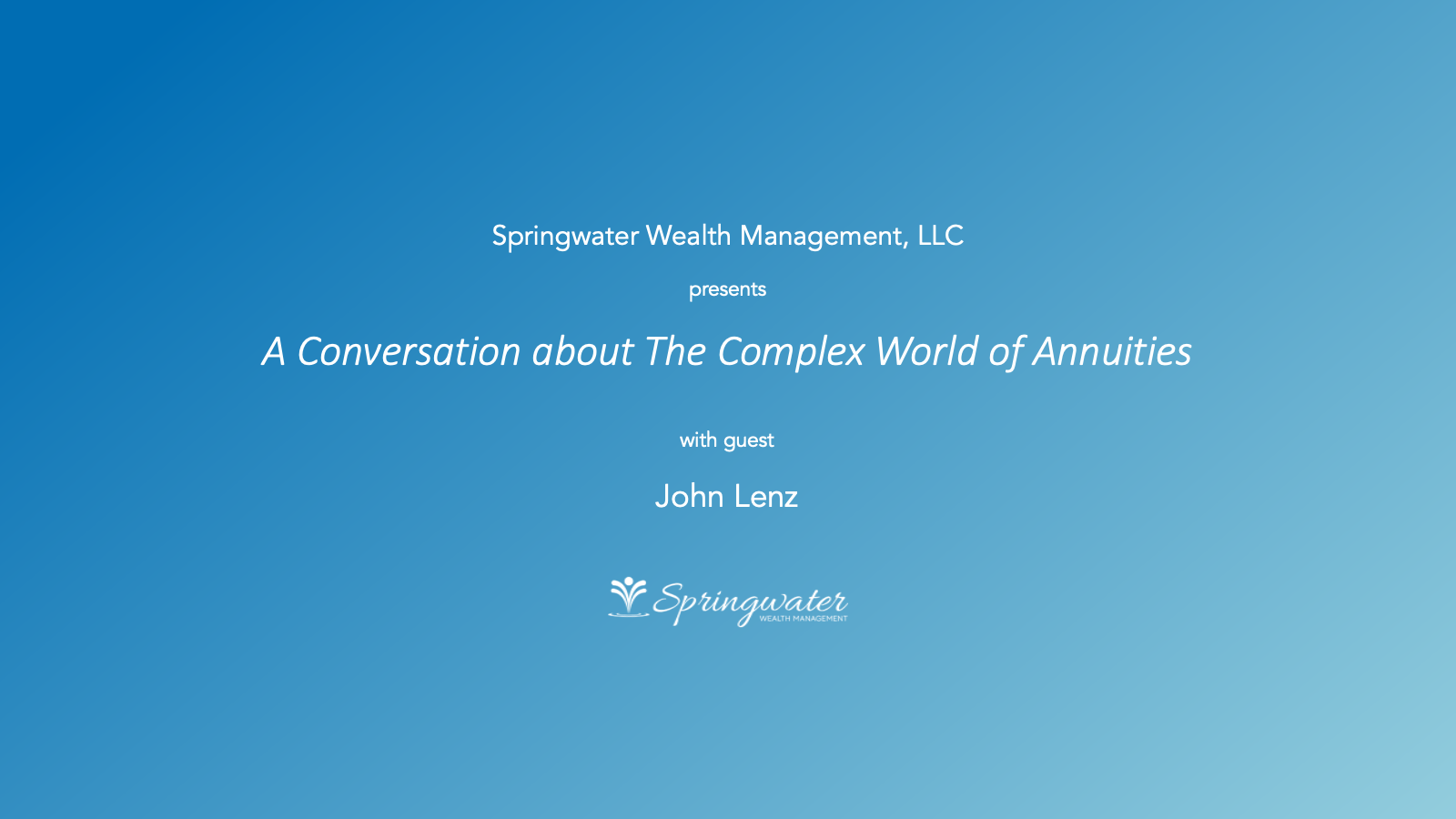 In a speech to the leaders of the G7 group of nations, President Biden made a number of significant announcements about his administration’s intent to change America’s course on the world stage. He confirmed the US’s formal re-entry into the Paris climate accord. He announced that the US would join a pledge to increase the funding and supply of COVID-19 vaccines to poorer countries. He reversed the prior administration’s order to withdraw thousands of US troops from Germany, and he confirmed America’s commitment to NATO’s Article 5, which pledges collective defense should any member country be attacked.

As we approach the grim milestone of a half million of our fellow citizens killed by this highly contagious disease, remember that less than a year ago there were just a handful of fatalities. The pandemic’s official death count equals the size of a major city – nearly as many as the population of Sacramento, for example.

As of last week, The Institute for Health Metrics and Evaluation (IHME), an independent global health research center at the University of Washington, is projecting that fatalities in the US will rise to between 572,000 and 616,000 by June 1. The variance is based on the rate of adoption of various mitigation strategies like universal mask wearing, and the spread rate of more transmissible variants. It’s important to note that the projection is down significantly from that of two weeks ago – more on this below.

As we noted a few weeks ago, the testing rate has dramatically improved, and we’re now consistently testing nearly 2 million people every day. In addition, the positivity rate is continuing to trend down, and is now below 5%. 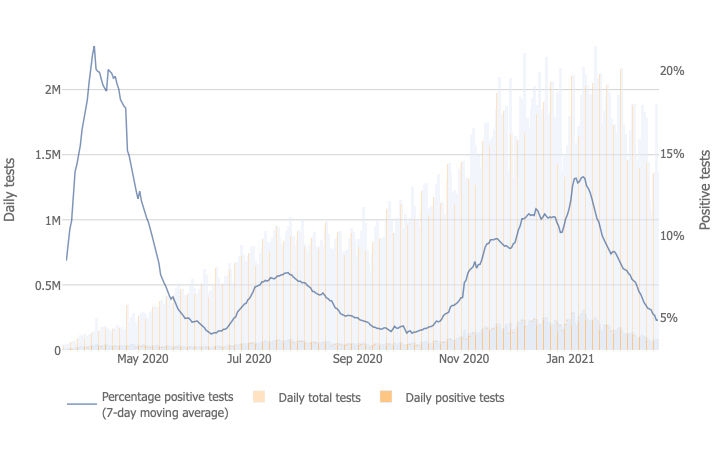 The number of Americans hospitalized with COVID is now down to about 62,000, which represents a decline of more than 50% in just over a month. 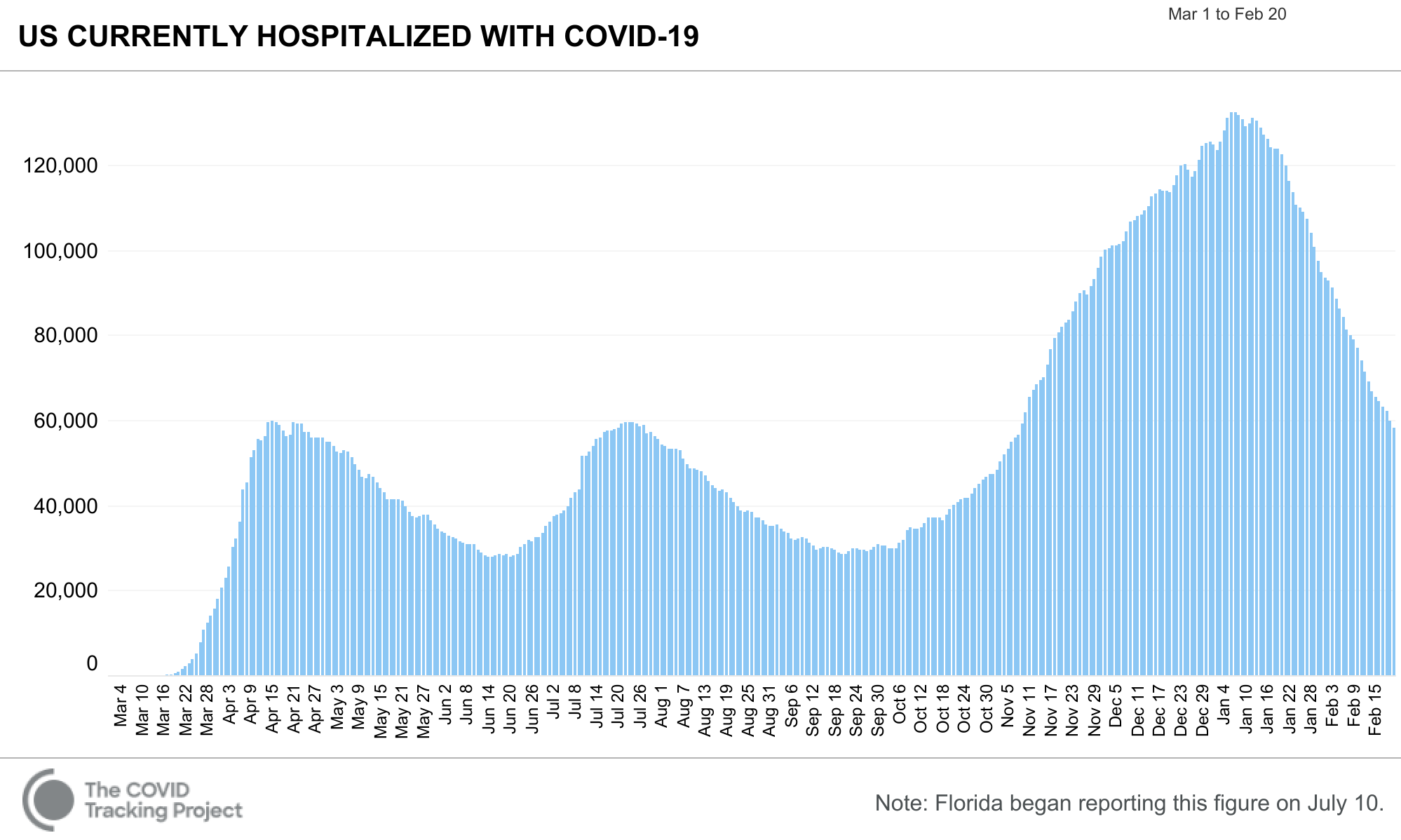 Deaths remain high, with more than 2,600 announced last Thursday. In the coming days, the country is likely to reach 500,000 total deaths. But reports of new deaths are finally starting to slow.

About 12% of people in the country have received at least one vaccine dose, and about 5% are fully vaccinated.

In a bit of additional good news, an Israeli study has shown that even if a required second vaccine dose is delayed (or possibly even missed entirely), a first dose triggers a strong immune response. Delaying a second dose beyond the date prescribed by the vaccine maker could help ease supply and distribution constraints.

The chart below shows the number of vaccine doses administered on a per capita basis across a select group of countries. 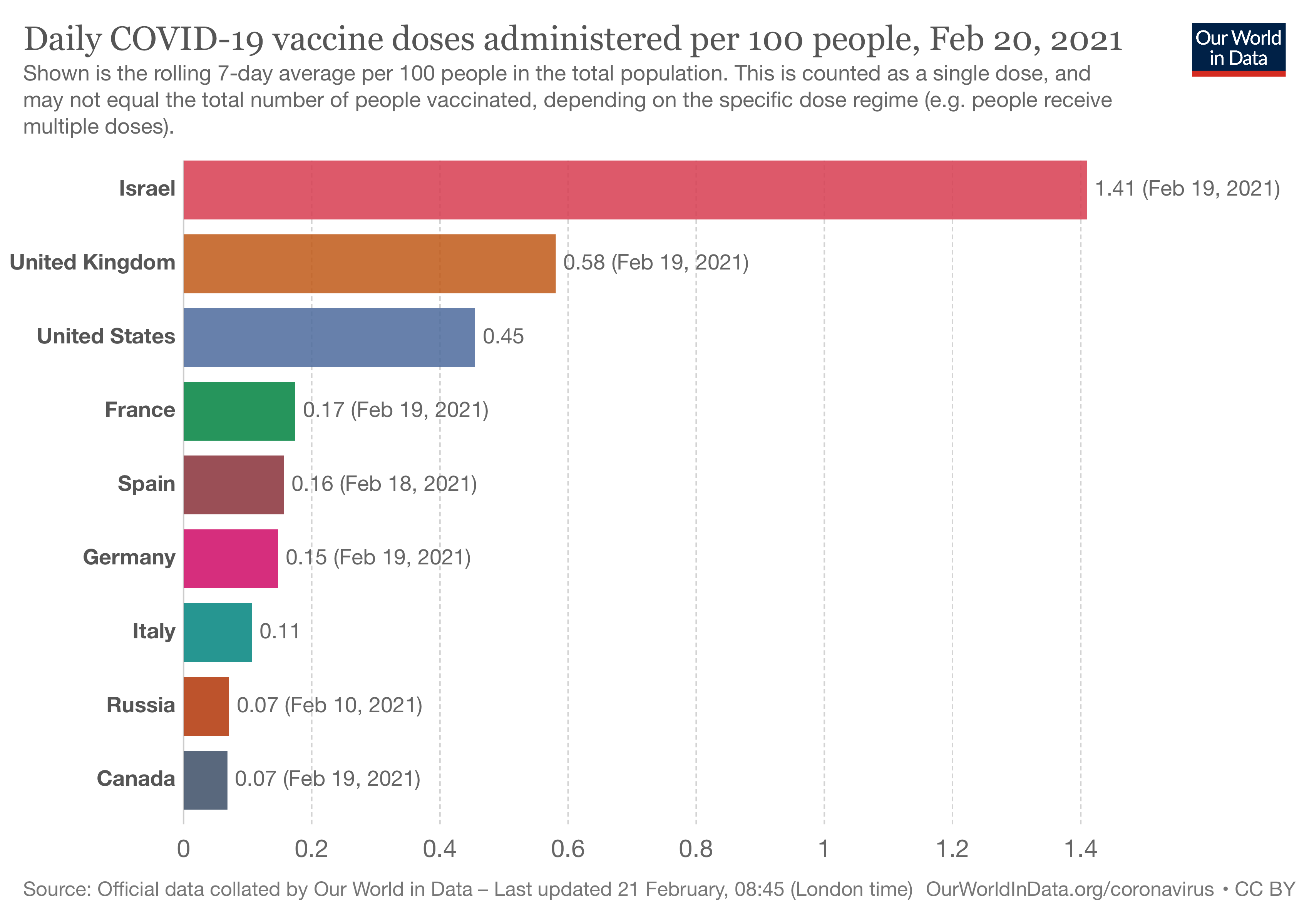 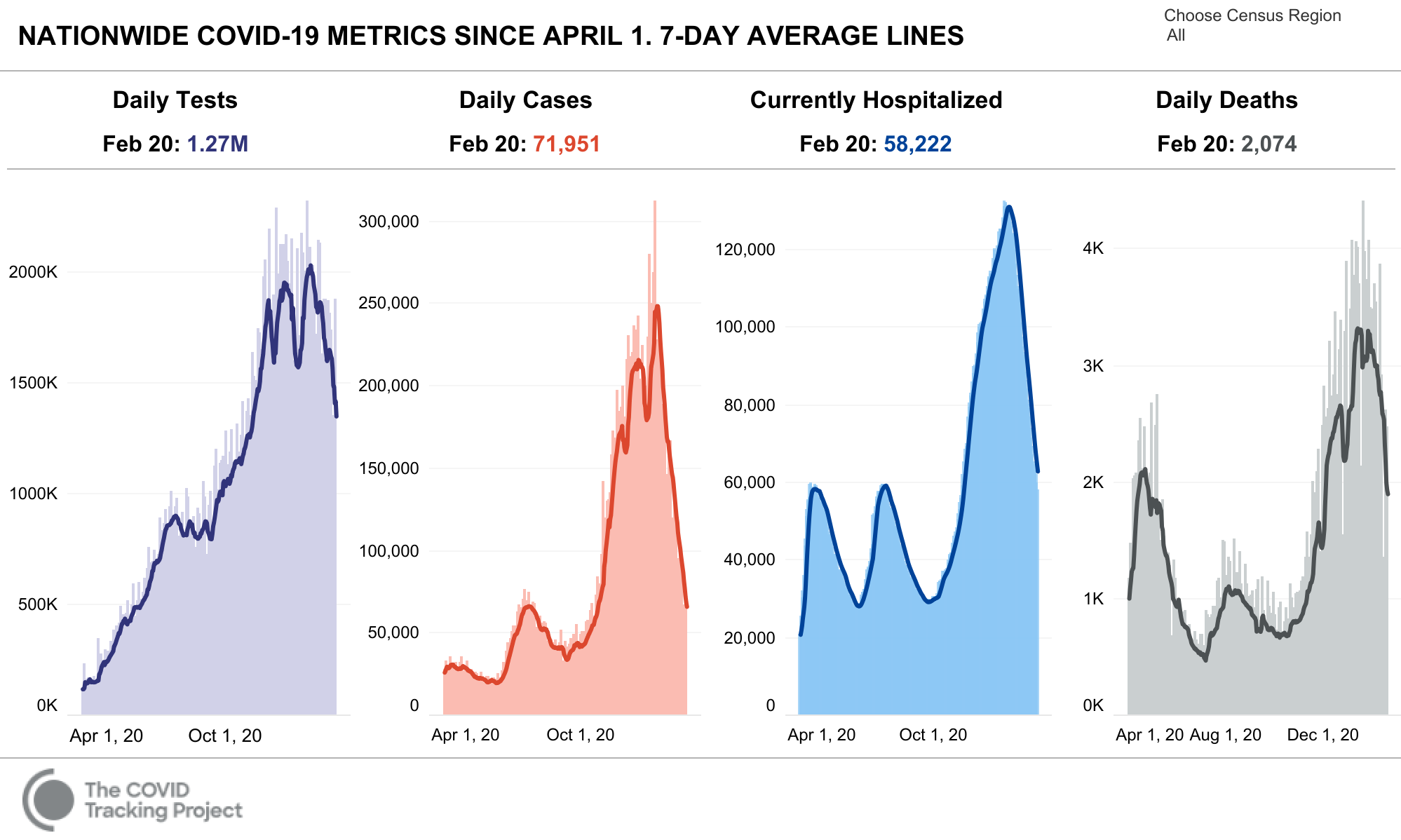 Last week, US online broker Robinhood was forced to admit publicly for the first time that it had lacked the regulatory capital to survive last month’s trading frenzy.

Robinhood attracted widespread condemnation and political scrutiny when it restricted its clients’ ability to buy certain popular stocks last month, including shares in GameStop. In parallel, it raised $3.4 billion in new capital from its shareholders, including from hedge funds that were on the losing side of speculative bets on the same stocks.

At the time, the company’s CEO said on CNBC that the company had “no liquidity problem” when it limited trading, describing its decision as pre-emptive. But last Thursday, his previous statements about events on January 28th came under scrutiny. In a tense five-hour Congressional hearing, chief executive Vlad Tenev admitted the company “would not have been able to post the $3 billion in collateral” that its clearing house had demanded.

Republicans and Democrats both jumped on the opportunity to grill the company’s representative for its role in the market chaos. And the Securities and Exchange Commission is reportedly investigating social media disinformation as part of a related fraud examination.

Market trading was driven by uncertainty about support for the Biden Administration’s fiscal stimulus package, as well as economic disruption attributable to the winter storms, and rising interest rates.

In recent days, US government debt has been sold off by institutional traders speculating that the administration’s spending plan will generate higher inflation. On Friday, the yield on the 10-year Treasury Note climbed 0.07% to 1.36%. Some traders are guessing that higher bond yields will take some momentum out of the strong equity market.

On Friday, a top official at the Federal Reserve pushed back against the argument from some economists that the size of the administration’s proposed $1.9 trillion pandemic relief package could slow down the economy’s recovery.

Williams also noted that, in his opinion, rising yields on longer term Treasury bonds reflects greater optimism about the economy, and therefore aren’t a concern.

When asked about rising prices for assets like stocks, Williams stated that rising prices have been driven by optimism about the economy and the expectation in the financial markets that long-run interest rates will stay low.

He said the US central bank remains focused on its twin goals of getting the economy to full employment and inflation back up to its 2% target. Last year, in response to the Coronavirus pandemic, the Federal Reserve cut its policy interest rates to zero and said it would continue to buy at least $120 billion of Treasurys and asset backed securities until it saw “substantial progress” towards its two goals.

The number of Americans filing for unemployment benefits rose to 861,000 for the week ended February 14th, from the previous week’s revised figure of 848,000 and well above market expectations of 765,000. It was the fourth straight week of rising claims, and the highest number since mid January. In addition, about 561,000 people applied for help from the Pandemic Unemployment Assistance scheme, which covers workers that do not qualify for initial claims, up sharply compared with 342,000 for the prior week.

On Sunday morning, Dr. Anthony Fauci, the country’s leading expert in infectious diseases, said that it’s possible Americans will need to continue wearing face masks into 2022, even though we may reach a “degree of normality” by year-end. Fauci and the CDC continue to advocate strongly for the wearing of masks as a critical step in the effort to slow the spread of the virus.

Multiple variants of the virus are circulating globally, and it appears that the transmissibility of the newer variants is higher than the original strain. As a result, limiting possible spread through good hygiene, physical distancing when necessary, and wearing facial coverings when appropriate remains essential.