The Impact of Student Loan Debt

A trillion dollars is a large number. Larger than the gross domestic product of 175 countries. More than double the annual revenue of any company in the Fortune 500. More than ten times the combined value of all of the professional sports franchises in America.

It’s also how much Americans owe on their student loans.

According to the most recent data from the Project on Student Debt, 70% of college graduates leave school in debt. Ten years ago, their average debt burden was about $17,000, but, as of last year, it had risen to close to $30,000.

When graduates looking for their first job are already $30,000 in debt, the negative effect on the economy is considerable.

Graduates are often forced to accept lower-paying job offers just so they can start paying off their loan debt, despite their qualifications.

Research shows that people with student loan debt are nearly 40% less likely to purchase a home, less likely to take out a car loan, and more likely to be living with their parents.

Defaults and delinquencies are also more common with student loans than almost any other form of debt. While credit card default rates have dropped under 10% due to stricter borrowing guidelines, the rate of student loans in “serious delinquency” has gone up to nearly 12%.

And according to the Consumer Financial Protection Bureau, many of these borrowers don’t even graduate college. This suggest that borrowers who default on their loans are “non-completers”, who take on debt but don’t benefit from the wage increase associated with a degree. 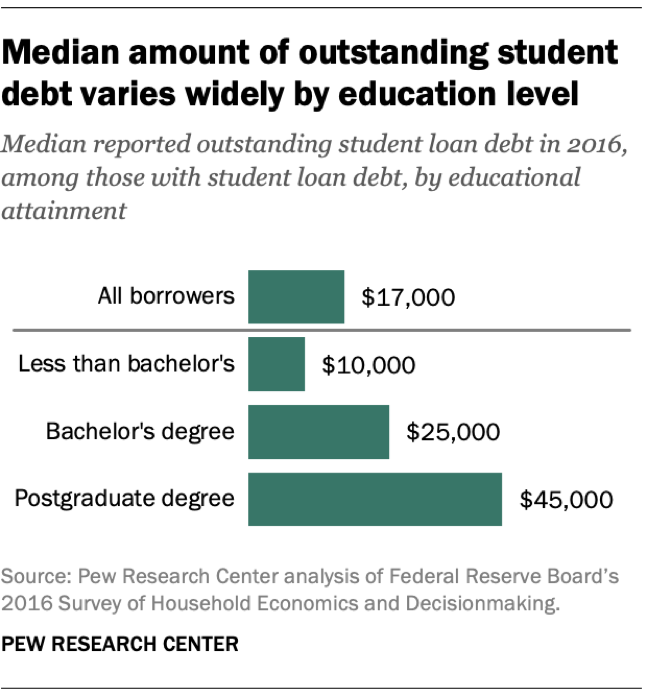 While these differences may partly reflect the fact that older adults have had more time to repay their loans, other research has found that young adults are also more likely now than in the past to take out loans to pay for their education. About sixty percent of college seniors took out loans for their education in the 2015-2016 school year, up from about fifty percent in the 1999-2000 school year, according to the National Center for Education Statistics.

In the aftermath of the Great Recession, the public and private sectors both recognize the impact of the student loan debt crisis. A wide variety of policy solutions are under discussion. Federal law requires colleges to provide more information about the cost of attendance, the likelihood of loan debt, and the career prospects of graduates.

It’s crucial that families are aware of all of their funding options. It’s also vitally important to fund grants, scholarships and other forms of aid that don’t require repayment. Last year, for the first time, scholarships and grants paid for more than 30 percent of the average college student’s tuition bill.

Compared with young adults who don’t have student debt, student borrowers tend to view the value of their degree less positively. Over one-third of those aged 25 to 39 with at least a bachelor’s degree and outstanding student loan debt say that the lifetime financial costs of their degree outweigh the benefits. By comparison, only 15% of young college graduates without outstanding student loans say the costs outweigh the benefits. 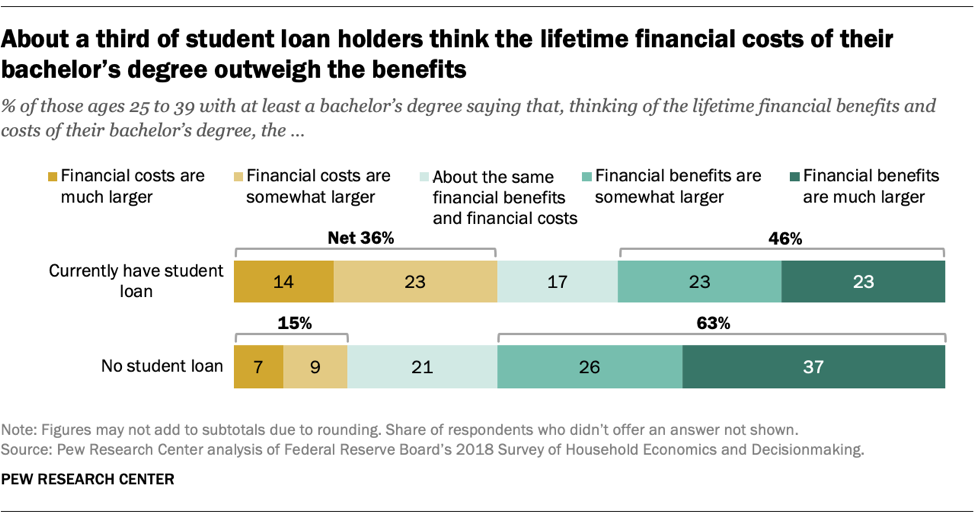 Interestingly earlier this year, Tim Cook, Aple’s CEO, highlighted the “mismatch” between the skills that people were acquiring in college and the ones demanded by modern businesses. He said that about half Apple’s recent new hires don’t have traditional four-year college degrees.

Many students with large outstanding debt balances are counting on some form of loan forgiveness to help them. But student borrowers – and parents with ParentPLUS loans – need to be aware of the huge potential tax liability that is the downside of a debt forgiveness program.

More on that next week…