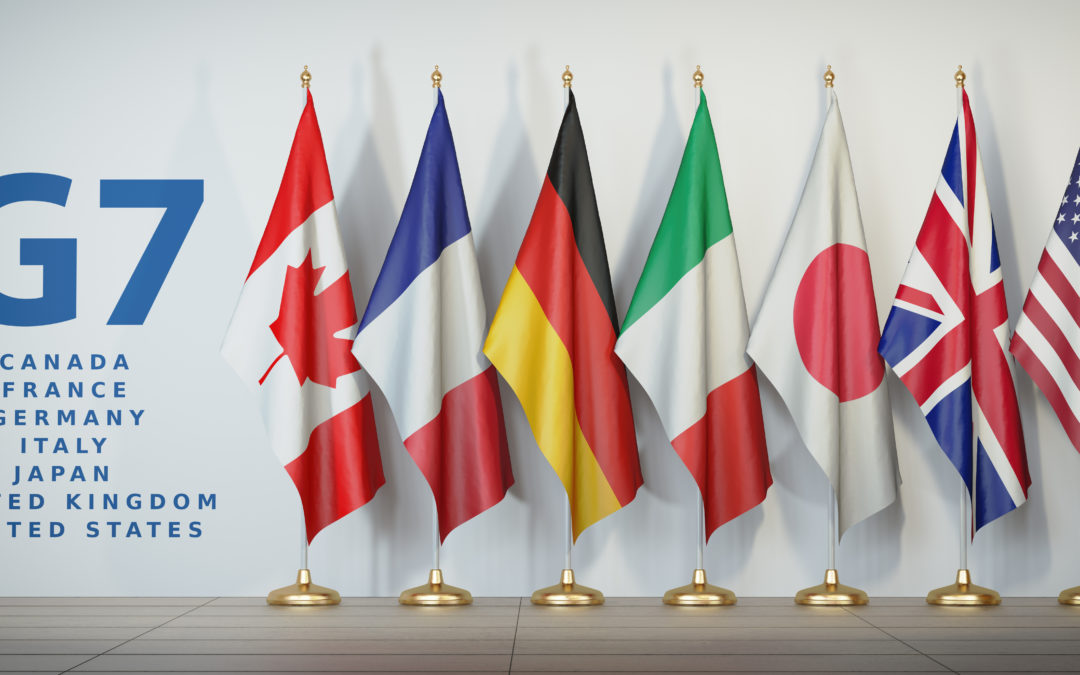 The G7 nations met this past weekend in England

Over the weekend, President Biden concluded his first meeting with the world’s other major heads of state, wrapping up a gathering of the G-7 in Cornwall, England. He also met with Britain’s Queen Elizabeth II, the 13th American president to do so in her seven-decade reign.

At the G-7 summit, there was a consensus among the world leaders that more needs to be done to address the impact of climate change, and a renewal of the commitment to help vulnerable countries bear the cost of doing so.

The president also announced that the G-7 attendees had agreed to draw attention to China’s human rights abuses, to coordinate a strategy to “deal with China non-market policies that undermine competition,” and to take action against forced labor in numerous industries.

The G-7 summit also produced a unified declaration on global health, intended to ensure that future pandemics are less deadly. The declaration is described as a “historic statement setting out a series of concrete commitments to prevent any repeat of the human and economic devastation wreaked by coronavirus.” As part of the declaration, the seven nations will provide one billion doses of vaccine for less developed nations, and will also take steps to decrease the chances of a future global health crisis.

The major US stock indexes closed virtually flat on Friday, as investors weighed the prospect of the continuing robust economic recovery against expectations of higher inflation. The reopening economy has revealed pent-up demand, but the “supply side” is presently struggling to meet that demand. As a result, price pressures are rising, and are being reflected in higher inflation numbers. Investors currently appear to be accepting the Federal Reserve’s argument that the rise in inflation will be temporary, and attributable to the aforementioned supply/demand imbalance. For the week, the Dow Jones Industrial Average fell 0.8%, while the broader S&P 500 index gained 0.4%, and the tech-heavy Nasdaq rose 1.9%.

Last week, the yield on the benchmark 10-year US Treasury Note declined to a 3-month low of 1.428%. As noted above, investors appear to acknowledge that inflationary pressures are temporary, and that the recovery of the labor market is still incomplete (see more below). Further, a Treasury auction – the method by which the US government raises funds through bond issues – revealed strong demand for the 3-year and 10-year notes and mixed demand for a 30-year bond.

Oil
Global oil markets have benefitted from both increasing demand and OPEC-directed supply reductions, one result of which is that the US crude benchmark “West Texas Intermediate” rose above $71 per barrel for the first time since late 2018.

The chart below shows the price history of the WTI benchmark over the past 10 years: 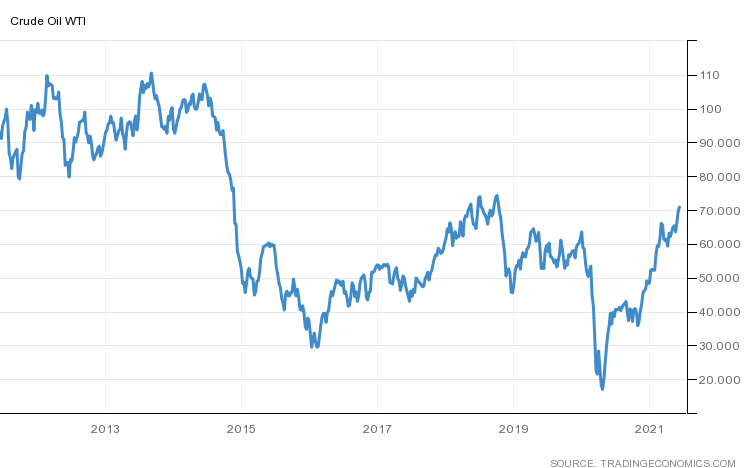 Gold
Gold – considered by some investors as an inflation hedge – fell more than 1% last week, to around $1,875 an ounce. The surge in the US consumer price index – seen by many as a good proxy for the overall rate of inflation – has been attributed to temporary conditions, including a low comparison point (i.e. comparing today’s prices to 2020’s depressed pandemic numbers) and the ongoing release of pent-up demand during the economic reopening.

The chart below shows the 10-year history of spot gold prices: 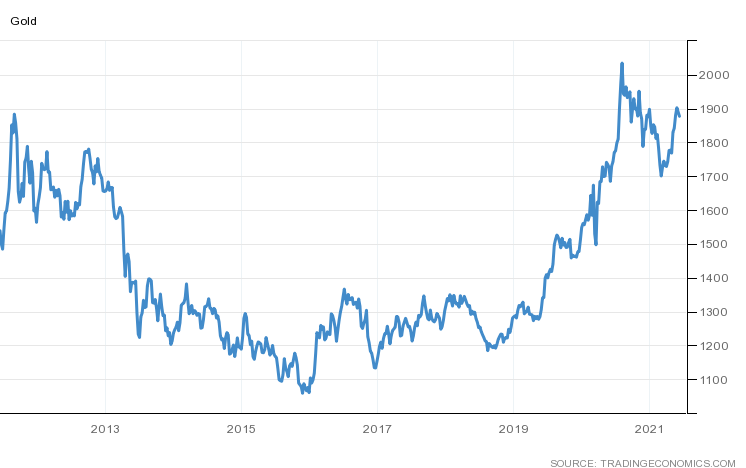 The Consumer Price Index for All Urban Consumers (or “CPI-U”) is a popular measure of inflation in the US. In May, it continued to trend higher. “Broad CPI” is comprised of all items, while “Core CPI” excludes the more volatile prices of food and energy. Both CPI measures are up on a year-over-year basis – the broader CPI was up 5.0% compared to May 2020 levels, and the Core index rose by 3.8% from a year ago.

It’s important to note that the “compared to…” number is important. At the start of the pandemic, prices fell sharply due to collapsing consumer spending and a decrease in fuel demand, before climbing back to pre-pandemic levels over the summer. But a combination of several rounds of stimulus checks and sustained ultra-low interest rates have pushed prices noticeably higher in 2021.

Although the Federal Reserve uses a different index, both to define and measure inflation, it is beginning to look more and more like the central bank will increase interest rates at an upcoming meeting. The Fed’s stated long-term target for inflation is 2%, and the current readings may be enough to prompt it to take action. Curious why the Fed wants a moderate amount of inflation? Here’s why. 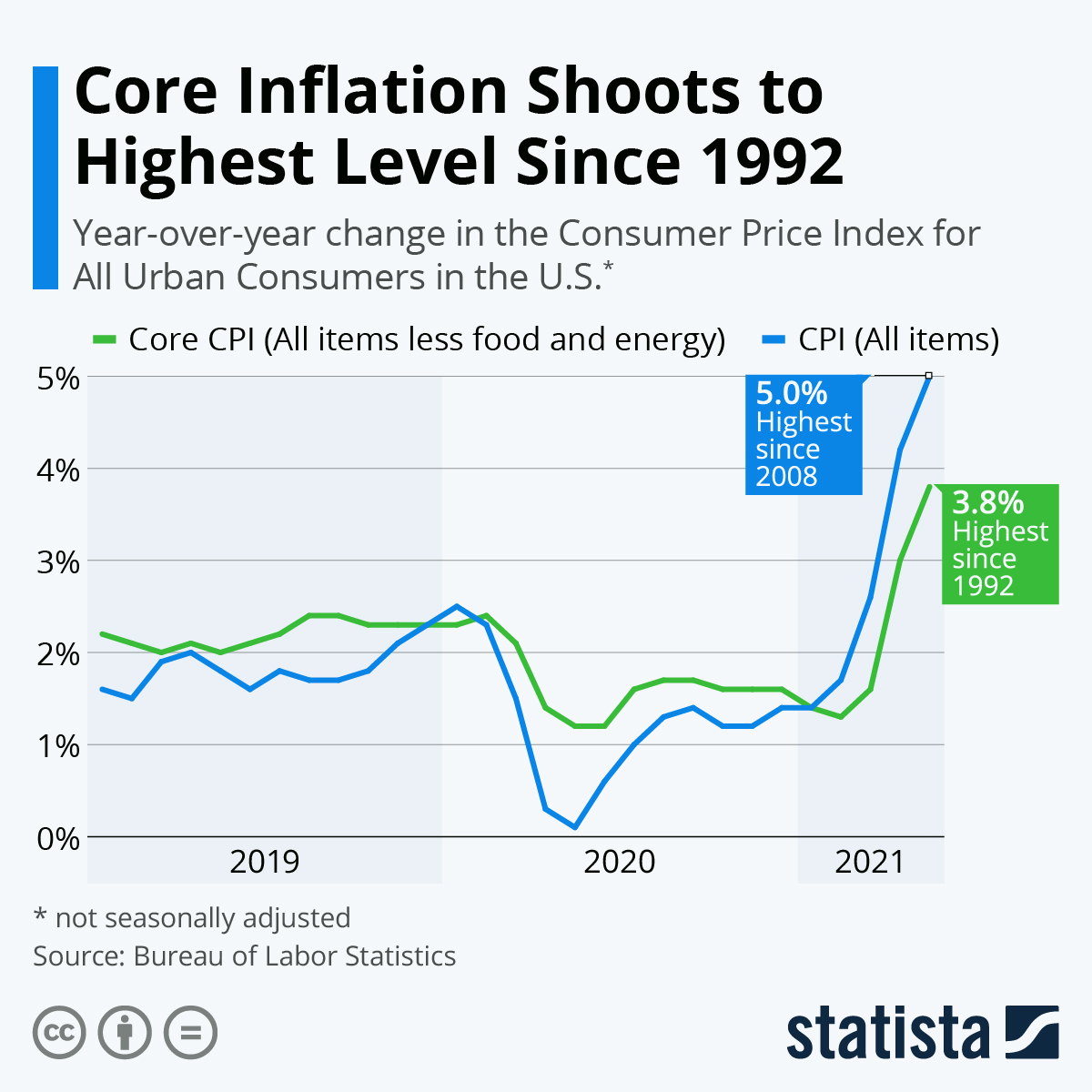 Fixed 30-year mortgage rates averaged 3.15% during the week ending June 4th, down by just 0.02% from the previous week.

The chart below shows the historical level of mortgage rates in the US over the past decade:

Home prices continue to rise across most of the country, with some areas experiencing unprecedented price increases. In the suburbs of Boise, Idaho, for example, prices have risen over 30% this past year.

Year-on-year, house prices increased 13.9% in March, the largest rise on record. House price growth over the prior year clocked in at more than twice the rate of growth observed in the first quarter of 2020, just before the effects of the pandemic were felt in housing markets.

The chart below shows the 10-year change in US housing prices, measured monthly.

The number of Americans filing new claims for unemployment benefits dropped to 376,000 for the week ending June 5th, the lowest level in nearly 15 months and slightly higher than the market expectation of 370,000.  The labor market continues to be driven by the expanding economic reopening, as well as the declining number of new COVID cases and the rising percentage of vaccinated people.

The number of job openings reached a record level in April as businesses look to increase staffing in anticipation of what is expected to be a busy summer.

While some see the high number of job openings as a positive sign that the labor market is recovering rapidly from the pandemic-driven shutdown, many businesses are struggling to fill available positions because a record number of employed workers are leaving their existing jobs. Economists believe this indicates those workers are optimistic about the ability to find another, possibly better-paying position with another employer.

Overall, there were over 6 million hires in April, against just under 6 millions “separations from service” (which includes layoffs and voluntary quits). The net effect is a total employment gain over the past 12 months of approximately 11.3 million. 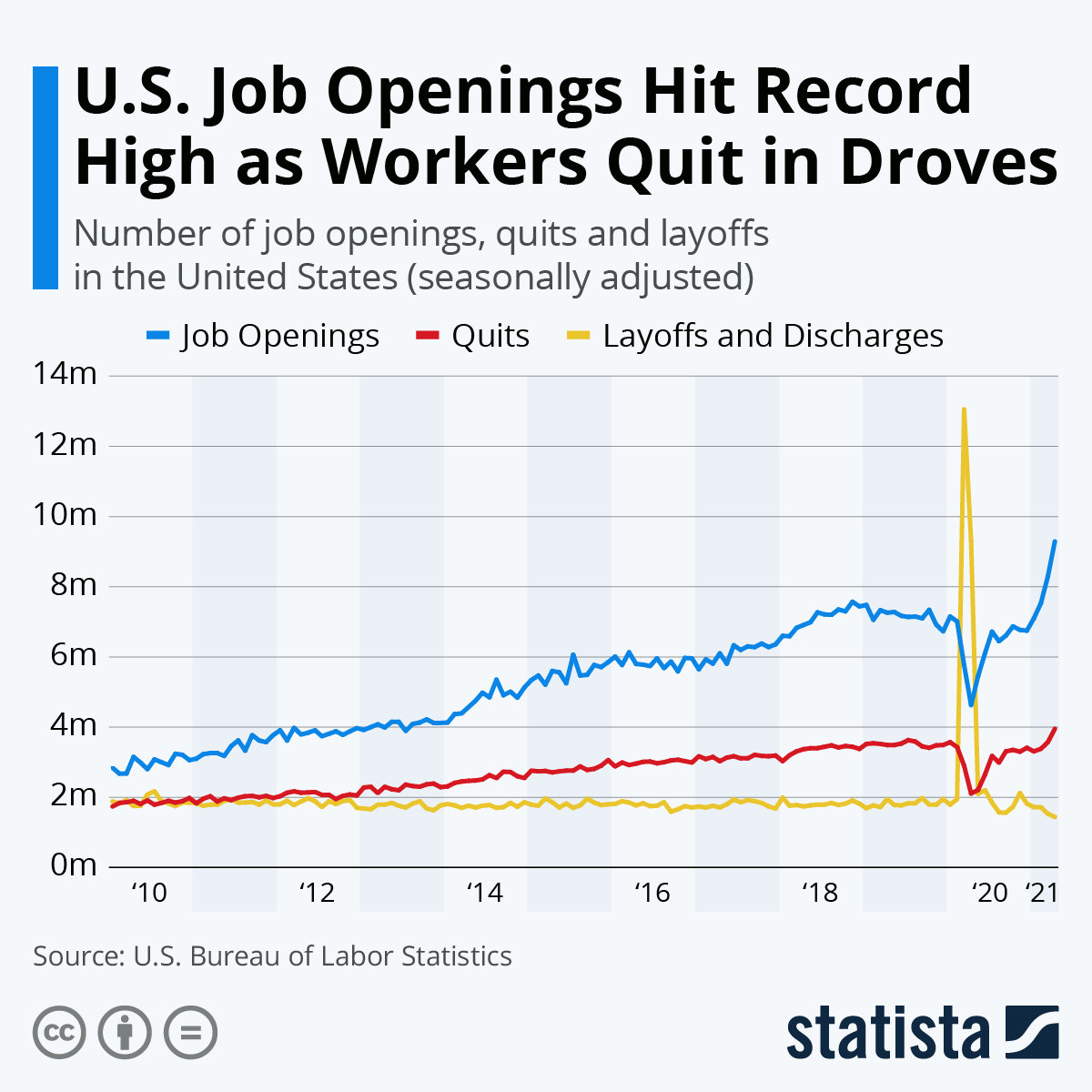 Generally good news in the economic sphere this past week, with the economic recovery continuing unabated, and the Federal Reserve maintaining its position that the inflation numbers are nothing to be concerned about.

We remain available to support you in any way we can.