Outdoor dining offered by restaurants as they reopen

As we close out the month of August and enter the fall, the nation continues to suffer from the health effects of the COVID-19 pandemic, the resulting economic fallout and continued racial unrest and social upheaval. It has been a challenging year for Americans on many levels and few have been untouched.

Yet, for investors, the news is good. This past week the Dow Jones Industrial Average became the latest major stock market index to fully recover from the losses incurred in March. The S&P 500 index and Nasdaq index have both set all-time highs this year.

The Federal Reserve
The big news last week for investors came from the Federal Reserve, which made a major announcement about its interest rate policy. In the past the Fed has followed a mandate from Congress to minimize unemployment and contain inflation.

The Fed believes the long-run normal rate of unemployment ranges from 3.5% to 4.7%. You can see from the chart below, that the Fed has struggled to keep unemployment within this range.

After the Great Recession, the Fed was able to bring unemployment down significantly. Recall that the unemployment rate was 3.5% just this past February. And note the massive spoke in the spring of 2020.

The Fed’s target for inflation over the long run is approximately 2%. We can see from the chart below that the Fed has been successful in keeping inflation in that range since the early 1980s.

In fact, the Fed has actually been attempting to increase inflation for the past few years. Fed officials believe that the economy is vulnerable to deflation when actual inflation is below 2%. Deflation – where prices decline over time – is considered to be a bad thing, because consumers will delay spending in anticipation of lower prices in the future. Delayed spending can lead to a recession.

Now the Fed is saying that it will focus primarily on full employment and economic growth and allow inflation to run even if it moves above the 2% target. In practical terms this means that the central bank will not raise interest rates preemptively to head off the threat of higher inflation.

The Fed controls interest rates by setting the “Fed Funds” rate, which is the interest rate banks charge each other for overnight loans. Banks use these borrowed funds to meet their reserve requirements with the Federal Reserve. Here is the history of the effective funds rate over the past 65 years.

What does this mean for you? It’s reasonable to expect interest rates to remain low for several, perhaps many, years. This will make it easier to finance large purchases like cars and houses. However, it also means that returns for investors, across all asset classes will likely be lower. We anticipate that a portfolio invested 50% in stocks and 50% in investment-grade bonds will earn about 4% per year.

The Economy
The economic picture continues to be very mixed. There are winners and losers in the coronavirus economy. Clear winners: Amazon, Netflix, Microsoft, Google and Apple. Clear losers: airlines, restaurants and bars, and entertainment.

The Labor Department reported that consumer spending has increased. Personal spending increased a seasonally-adjusted 1.9% in July. But spending remains 4.6% below the level of February.

Personal savings increased 17.8% in July. It seems Americans were banking the enhanced unemployment benefits they received from the federal government. Those benefits ($600/week) ended in July and Congress has not agreed to a continuation.

Instead, President Trump issued an executive order on August 18 providing $300/week in additional unemployment benefits. He also urged states to add another $100/week. Most states are in the process of administering the former through FEMA and some states have decided to provide the latter.

But it’s apparent that more needs to be done. Too many Americans are unemployed and cannot pay their bills. One disturbing indicator is that grocery sales have actually dropped and sales at dollar stores have gone up. This suggests that many Americans are cutting back on even basic necessities.

COVID-19 Numbers
The World Health Organization expects the virus will be under control within two years.

Globally, across 213 countries and territories, there have been over 25 million confirmed cases and over 843,000 deaths. In the US, nearly 6 million have been infected and over 183,000 have died.

Americans are bending the curve again after a surge earlier this summer. However, testing is still not where it needs to be. 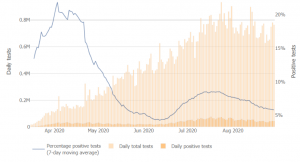 The number of deaths in the US remains elevated as can be seen below: 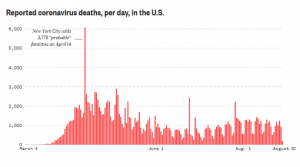 The Institute for Health Metrics and Evaluation (IHME) projects that the US will lose 317,000 people to the virus by December 1, 2020. The projection is lower if masks are worn more widely by Americans.

The number of deaths from the virus in the US is higher, on a per-capita basis, than most of the world. Note the column to the far right in this chart from Statista. There are 150 countries and the US is in the top 10. 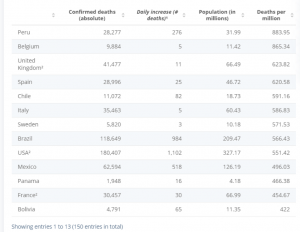 The Harvard Global Health Institute provides the heat map below for a more localized (i.e. county level) view of the threat level. 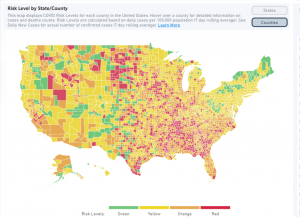 Spot gold traded at $1,975 on Friday. Gold will remain strong in this environment of uncertainty.

The Labor Market
The Labor Department reported that another 1.01 million Americans filed for unemployment benefits in the week ending August 22, 2020. While this was a drop from the prior week, unemployment claims remain stubbornly high. This is an indication that the economy continues to suffer as entire industries – like airlines, and retail – have been profoundly and perhaps permanently impacted by the coronavirus.

The unemployment rate remains at 10.2%.

Payroll Tax Deferral
The President and the Treasury Department are moving forward with a payroll tax deferral. While many Americans will cheer the move, it is fraught with problems. Employers cannot easily change payroll systems to accommodate the deferral of employment taxes. Employees will still owe the taxes. The President has indicated he hopes to convince Congress to forgive the taxes when they are due. However, Congress has expressed little interest in the plan. If Congress were to forgive these taxes, there would be a direct negative impact on Social Security and Medicare. Simply put, it is bad economic policy.

The Road Ahead
As we look to toward the fall, the presidential election looms as the most significant event that will impact investors. If the current administration remains in office, we can anticipate more of the current economic policies. If Democrat Joe Biden wins the election, we should anticipate more aggressive coronavirus fiscal relief for the economy and a shift in attention to the massive national debt and the looming funding crisis facing Social Security and Medicare.

It is apparent that significant progress is being made toward the development of a vaccine for the virus. The federal government expects one or more vaccine versions to complete the testing and approval process in the next six months. However, there will be other hurdles. The federal government will need to create and administer a national distribution system. Also, Americans will need to agree to be vaccinated. According to a Gallup poll published on August 7, one in three Americans wouldn’t take a Covid-19 vaccine if it were available free of charge. This presents a problem, if the country is ever to reach “herd immunity.” The World Health Organization lists vaccine hesitance as a top 10 global health threat.