The Bond Market Signals a Warning 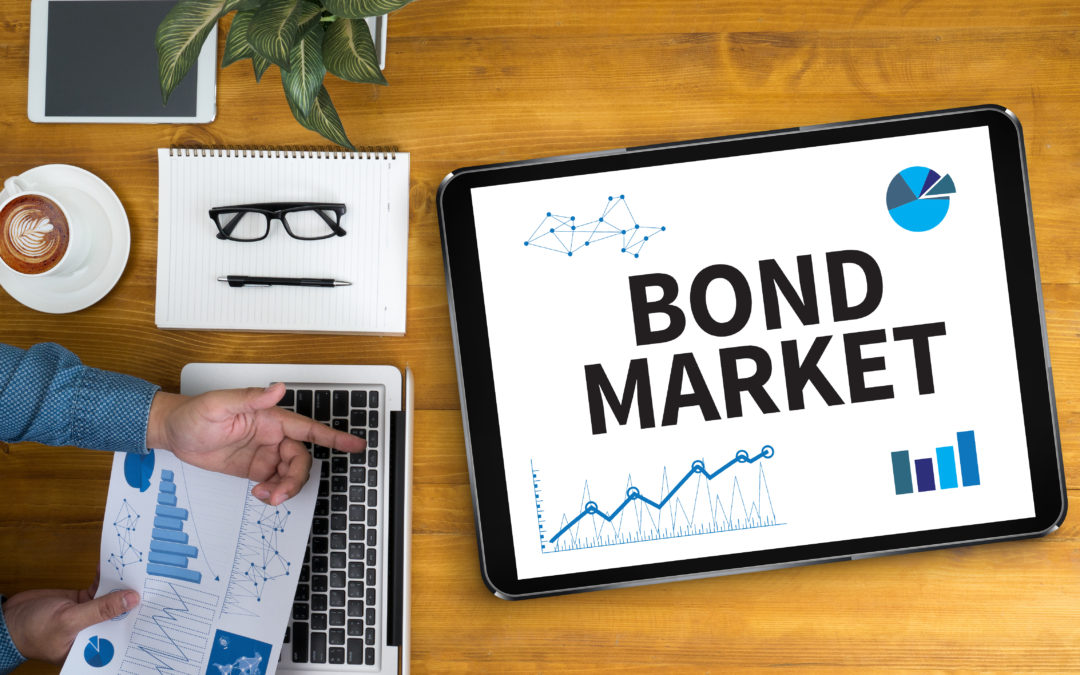 At the beginning of the pandemic and to minimize the damage to the economy, the Federal Reserve reduced short term interest rates to nearly zero and indicated that rates would be remain low for an extended period. This monetary support has been critical to preventing what might well have been an economic collapse.

The stock market has been encouraged by this unprecedented central bank support, the equally impressive fiscal response from the federal government, and the accelerating pace of vaccination. All the major stock market indices have reached new all-time highs in just the last week.

However, the bond market is beginning to flash mixed signals about what lies ahead. The rate for the 10-year US government bond is a key benchmark for investors. As we can see below, the rate has been climbing since the beginning of the year. Investors are asking why and what it means.

Bond interest rates rise when prices drop. Prices drop when sellers outnumber buyers. Investors sell bonds if they think interest rates are going to rise. Interest rates will rise in an inflationary environment. So, it may be that investors are concerned about inflation.

If inflation actually becomes meaningful, the Fed will be forced to reverse course and actually raise interest rates. It seems we are far from this situation, but investors are forward-looking and they seem to be indicating that they don’t believe the Fed.

What would cause inflation? The combination of massive monetary and fiscal intervention in the economy may result in a recovery that is stronger than expectations. The economy could overheat, which would cause prices to increase rapidly.

The stock market sold off last week, because investors are worried about inflation and the prospect of rising interest rates. Higher interest rates make it more difficult for both consumers and businesses to borrow.

We need to watch the bond market for additional indications of what may lie ahead.

The markets were mixed last week. The major indices set all-time records and then sold off toward the end of the week.

Globally, across 213 countries and territories, there have been over 114 million confirmed cases and over 2.5 million deaths. In the United States, over 28 million have been infected and over 513,000 have died.

The number of new cases of COVID-19 per day continues to drop. However, note that it remains above what it was in the spring and summer of last year. We are not out of the woods. 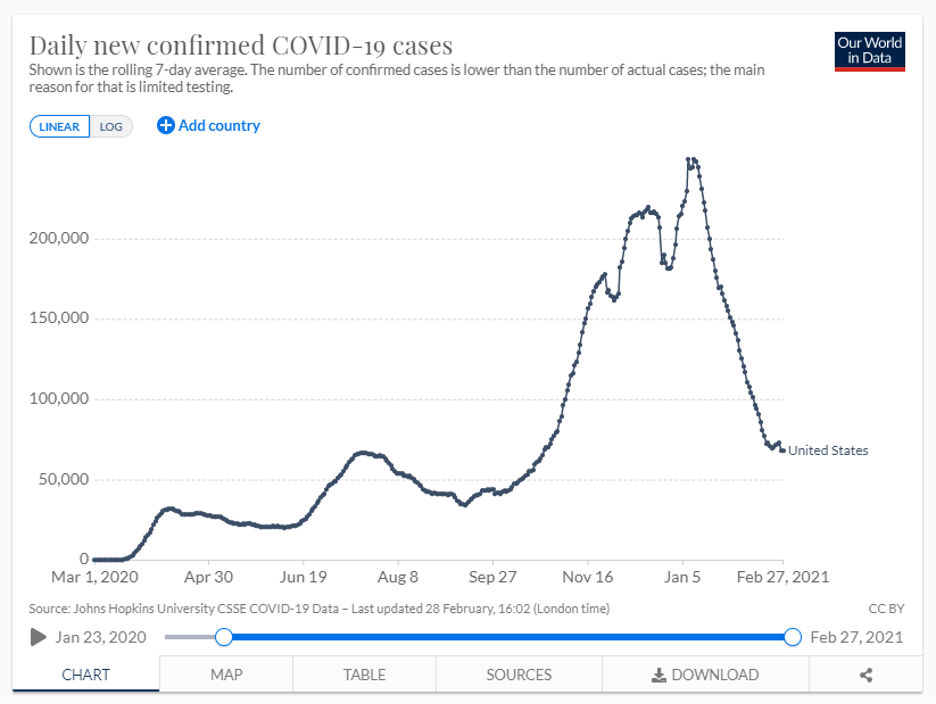 Testing has dropped off as resources are directed to vaccinating Americans. The test positivity rate continues to trend downward. 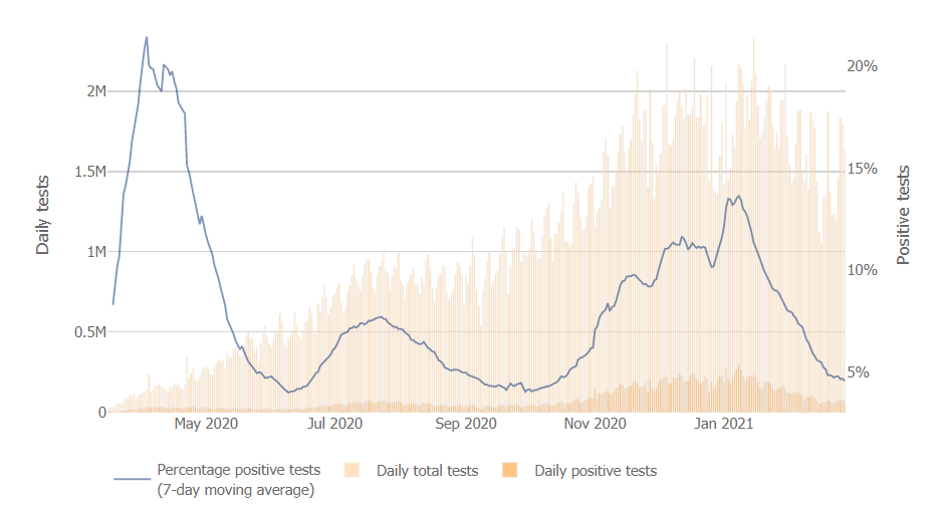 The hospitalization rate is down significantly. But it too remains above the levels experience last spring and summer. 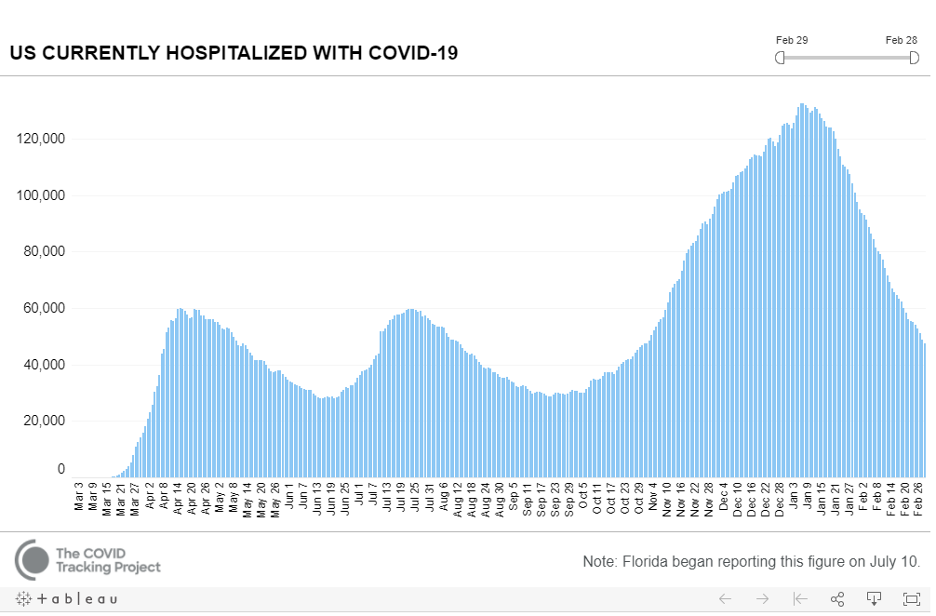 We have lost over 500,000 of our fellow citizens to COVID-19. It is staggering toll. During the last pandemic America lost 675,000 lives to the Spanish influenza. 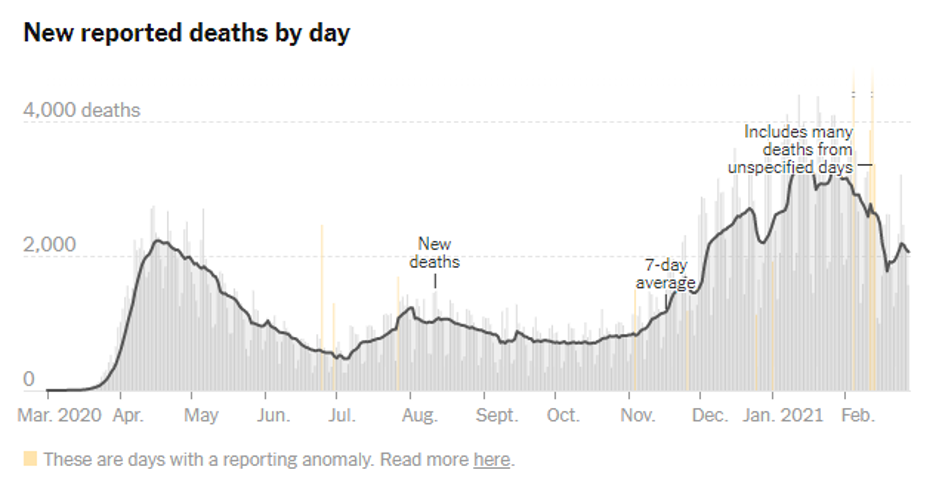 The Institute for Health Metrics and Evaluation (IHME) at the University of Washington projects that a total of between 564,000 and 601,000 American will die from the virus by June 2021. The variance is driven by mask usage, vaccinations, and other containment strategies.

If you want to see a summary of this data since March 1 of last year:

The rate of vaccinations is ahead of the pace President Biden set when he took office in January. 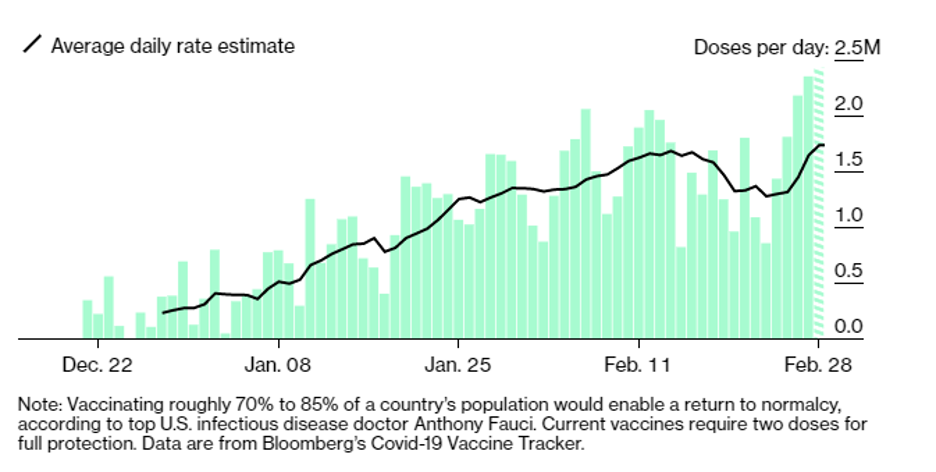 Here’s a comparison of the U.S. with selected large nations. 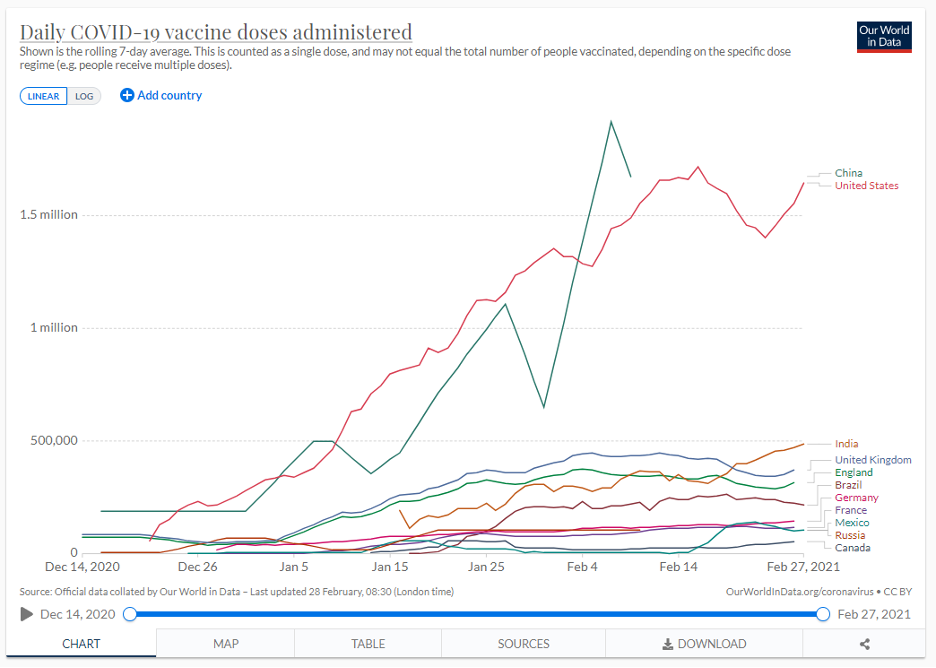 New claims for unemployment benefits fell significantly last week to 730,000. The trend, as depicted, below is encouraging.

The official unemployment rate is 6.3% as of January. However, the Federal Reserve believes that the actual rate of unemployment is closers to 10%. The difference is that many people have left the workforce and are no longer considered among the unemployed. The labor participating rate has fallen from 61% before the pandemic to 57.5%. So, there is still much to be done to get Americans back to work. 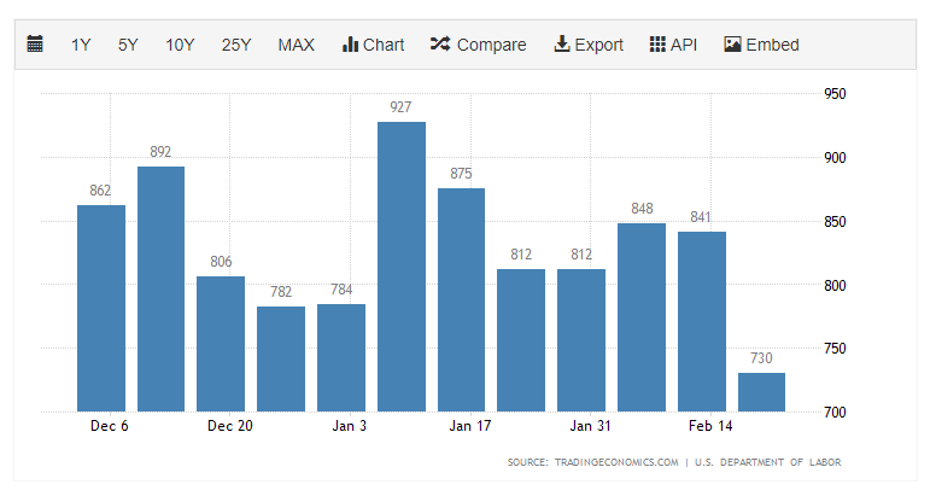 Last week the House passed the administration’s $1.9 trillion proposed pandemic along party lines. The legislation will be taken up in the Senate this week. It will likely pass assuming there are no defections on the Democratic side of the aisle.

The stock market has largely priced in this package. So, if it somehow ends up getting whittled down, the market will not react well.

It’s still about vaccinations. We need to vaccinate faster than the virus is mutating. If we can do that, we will eventually beat virus. If we do not, then the future is far less certain.