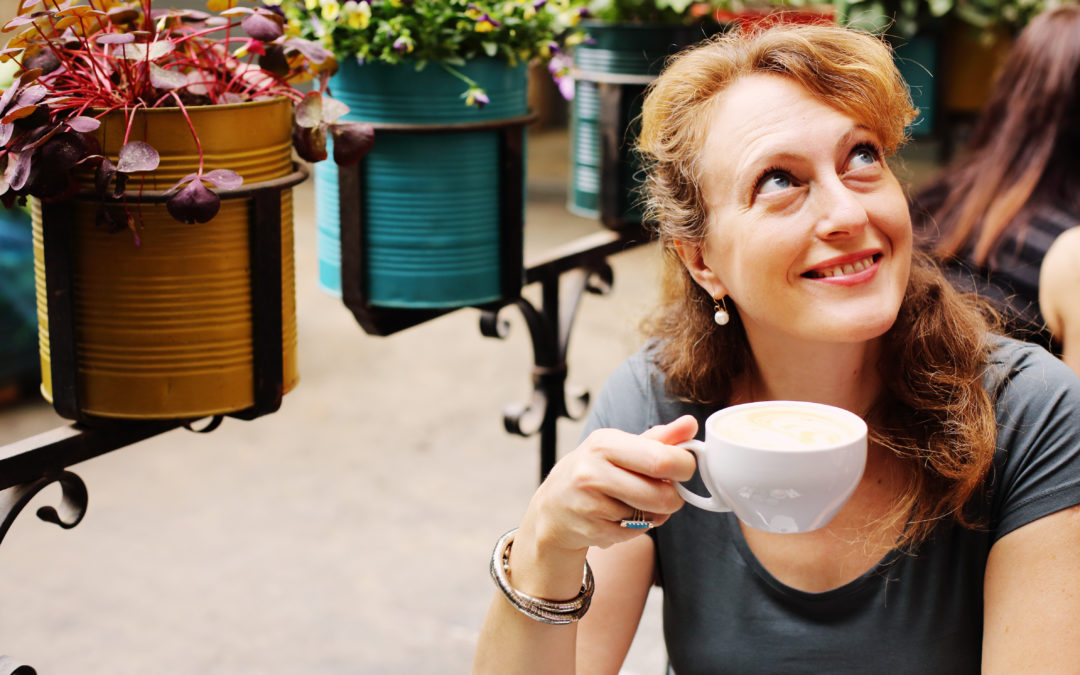 Israel has succeeded in halting viral spread, and has lifted outdoor mask requirements

The Dow Jones Industrial Average and the benchmark S&P 500 Index both hit new all-time highs on Friday, producing a fourth consecutive week of gains, with optimism about the economic recovery driving investor sentiment.

Data released on Thursday revealed a strong rebound in both consumer spending and the labor market. Also, the Federal Reserve’s pledge to keep interest rates low despite higher inflation continued to support sentiment.

The yield on the benchmark 10-year Treasury note fell to a 1-month low of 1.53% last week. Investors balanced expectations of a strong economic recovery against risks that include rising coronavirus infections in some states, slow vaccination in some countries around the world, and a new list of sanctions on Russia. The 10-year rate remains well below the most recent high of 1.78% reached at the end of March.

The chart below shows the yield on the benchmark 10-year Treasury over the past 5 years: 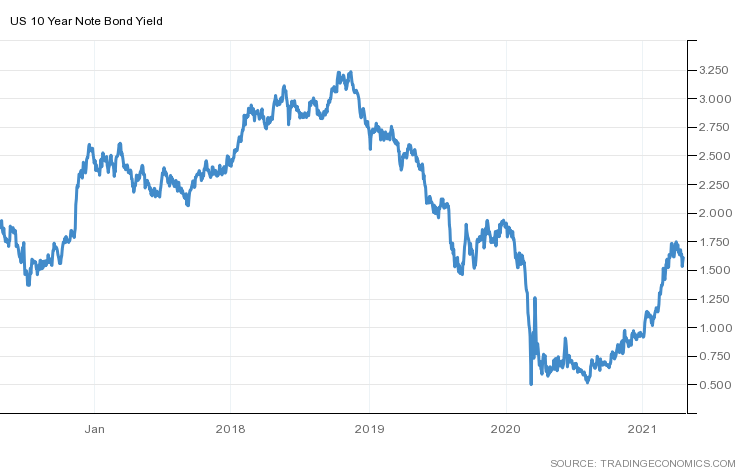 The number of Americans filing for unemployment benefits fell to 576,000 for the week ending April 10th, a decline of nearly 200,000 from the prior week and the lowest level since March 2020 when the pandemic erupted.

The labor market has been supported by the accelerating pace of COVID-19 vaccinations, the lifting of pandemic business restrictions in many states and the government’s latest $1.9 trillion stimulus package, which encouraged employers to hire more workers to respond to growing demand.

Despite this positive news, the latest labor market report also showed that nearly 17 million people were continuing to collect benefits, highlighting the fact that millions still face the loss of a job or income during the recent job market recovery.

Globally, across 192 countries and reasons, there have been nearly 142 million confirmed cases of the novel coronavirus, and over 3 million deaths. In the US, nearly 32 million have been infected, and over 567,000 have died.

The chart below shows that while the number of daily new confirmed cases has declined dramatically since the start of the year, they have plateaued at a stubbornly high level. 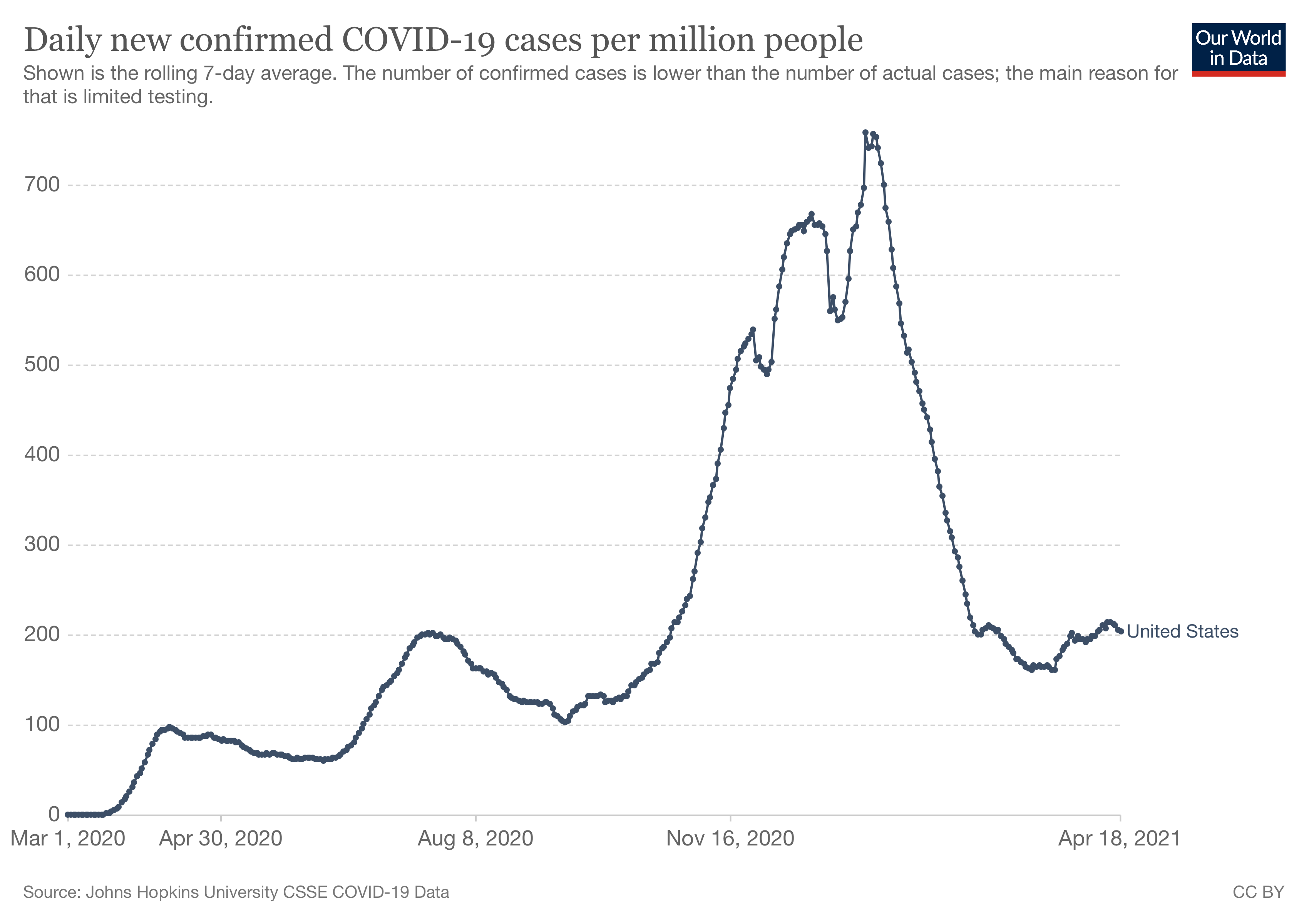 Testing has decreased as vaccination has accelerated. After falling rapidly during the first quarter of the year, the positivity rate has started to gradually rise again, likely the result of the emergence of more easily transmissible variants. 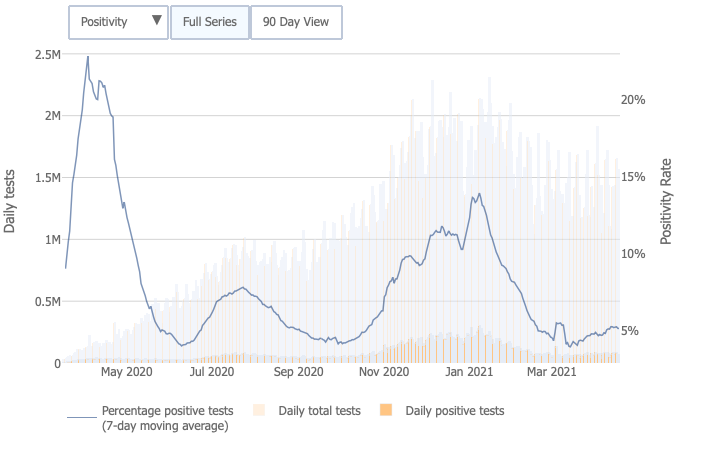 According to the CDC, more than half of all Americans have now received at least one dose of a COVID vaccine. 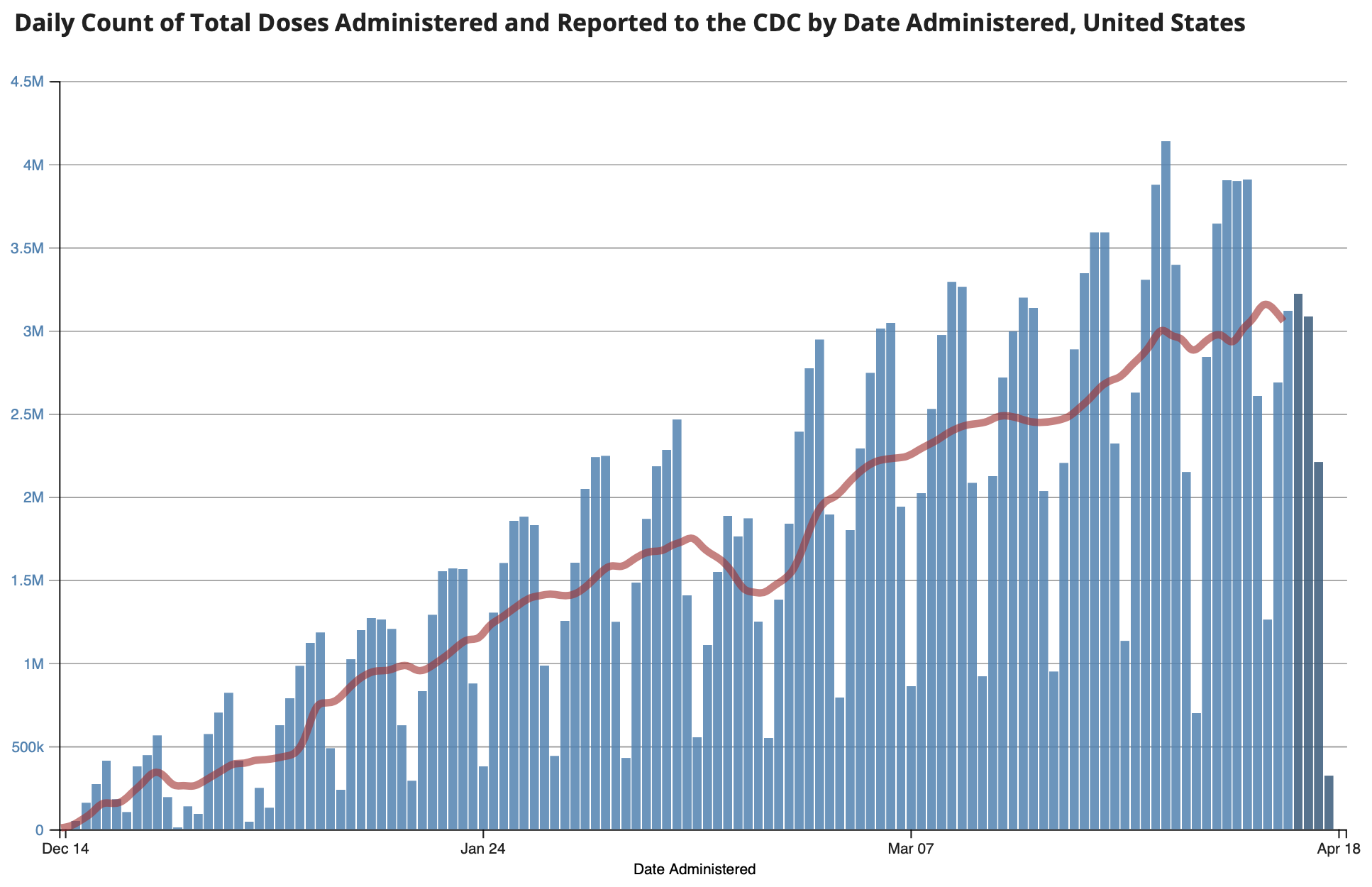 Last week, the CDC and FDA recommended a pause in the use of Johnson & Johnson’s Janssen COVID-19 vaccine.

Of the nearly 7 million doses of this vaccine administered so far in the US, a small number of reports of a rare and severe type of blood clot have been reported in people after receiving a dose. All reports occurred among women between the ages of 18 and 48, and symptoms occurred 6 to 13 days after vaccination.

In contrast, as of early last week, of the more than 180 million doses administered so far of the Pfizer-BioNTech or Moderna vaccines, no reports similar to those of the J&J vaccine were reported.

Yesterday, Dr. Anthony Fauci said that he expects use of the J&J vaccine will be resumed later this week, perhaps with restrictions or warnings attached.

We’re optimistic that we will soon be able to meet with our clients, colleagues and friends again in a “normal” environment.

Until then, we encourage you to keep the faith, get vaccinated when you can, be safe, and stay healthy.