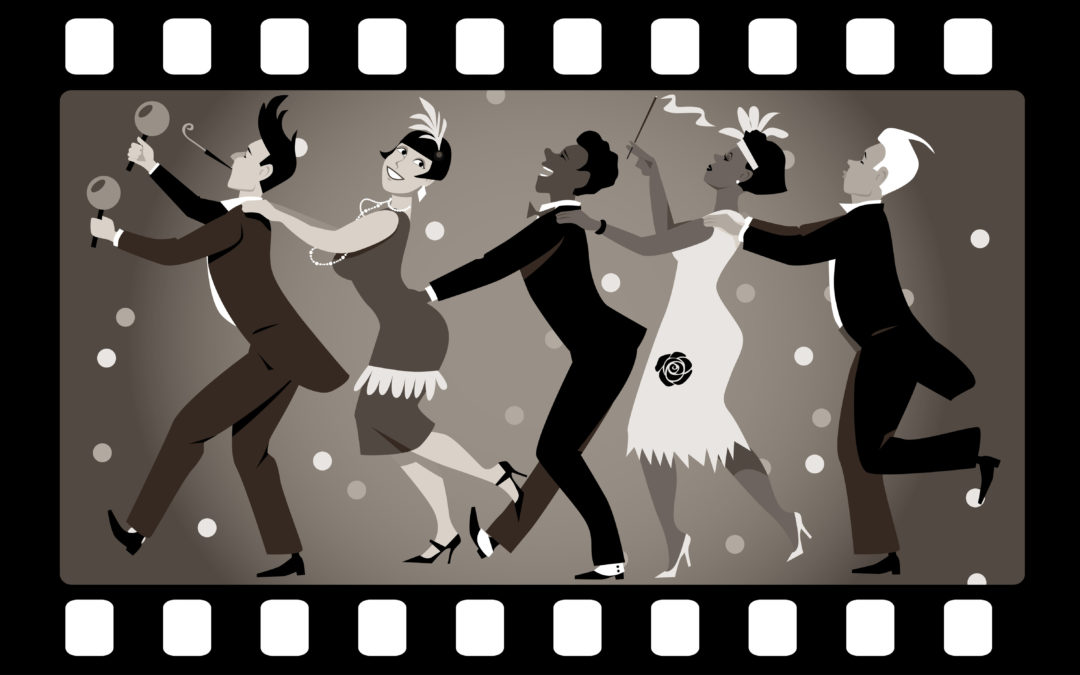 Is the American economy in another “Roaring ’20s”?

You’ve lived through a remarkable period in American history. The global pandemic brought the country to a near halt in 2020. The economy shrank dramatically. Millions of workers lost their jobs. The stock market crashed. Lives were radically disrupted.

You’re now living in another extraordinary period in American history. Brilliant scientists developed vaccines which are highly effective against COVID-19. Congress and two administrations provided multiple rounds of financial aid to individuals, families and businesses. The Federal Reserve made massive purchase of bonds and lowered interest rates to near zero.

The economic recovery has been remarkable. By almost every measure, the American economy is roaring back from last year’s derailment. Consumers are spending. Businesses are hiring. The Dow Jones Industrial average is up nearly 18% since February of 2020. Home prices are up 14%. The economy (as measured by gross domestic product) is expected to fully recover to its pre-pandemic level later this year and then grow at a faster pace.

We should see an infrastructure plan take final shape next week. It will likely be more than $1 trillion (and larger if the Democrats act without Republicans) and it will further fuel the economy.

This may well be another version of the Roaring Twenties.

Friday the yield on the 10-year Treasury Note was 1.559%. Yields have leveled out and are likely stalled pending more information about the direction of interest rates, the growth of the economy, inflation and action by the Federal Reserve.

Given the significant progress the United States and other developed nations have made in vaccinating their populations, we plan to scale back our coverage of COVID-19.

The world is by no means on the other side of the pandemic. Advanced nations must help less developed nations vaccinate their citizens. The pandemic will not be over until it is contained globally.

Globally, across 213 countries and territories, there have been over 172 million confirmed cases and over 3.7 million deaths. In the United States, over 33 million have been infected and over 597,000 have died.

The number of new cases continues to trend downward. The seven-day average is now below 20,000 for this first time since March 2020.

The Department of Health and Human Services reports 23,240 patients are in hospitals across the US, down from 39,810 last month. At the peak in January, over 142,000 were hospitalized. 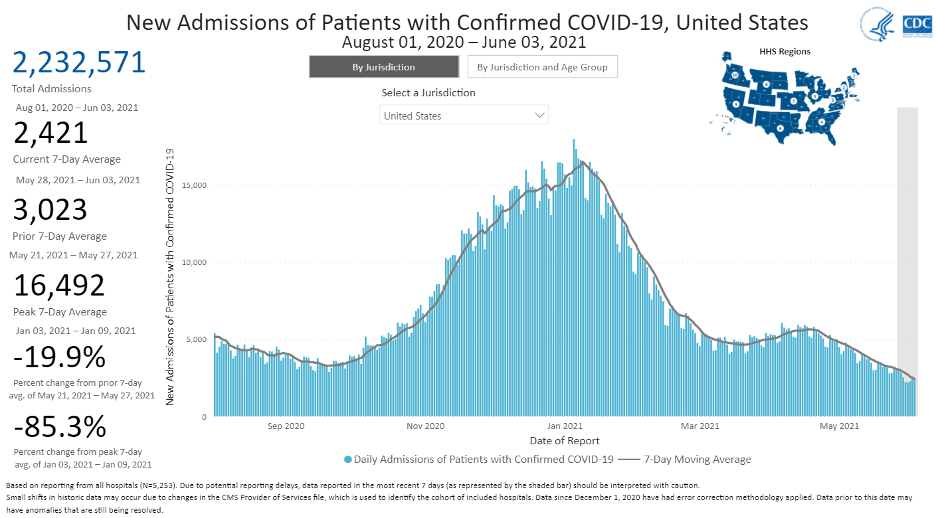 The average number of daily deaths in the US has fallen to the lowest point since March 2020.

More than 75% of those 65 and older have been vaccinated. This age group has been the most likely to die from Covid-19. Four out of five deaths in the United States have been people in this cohort. 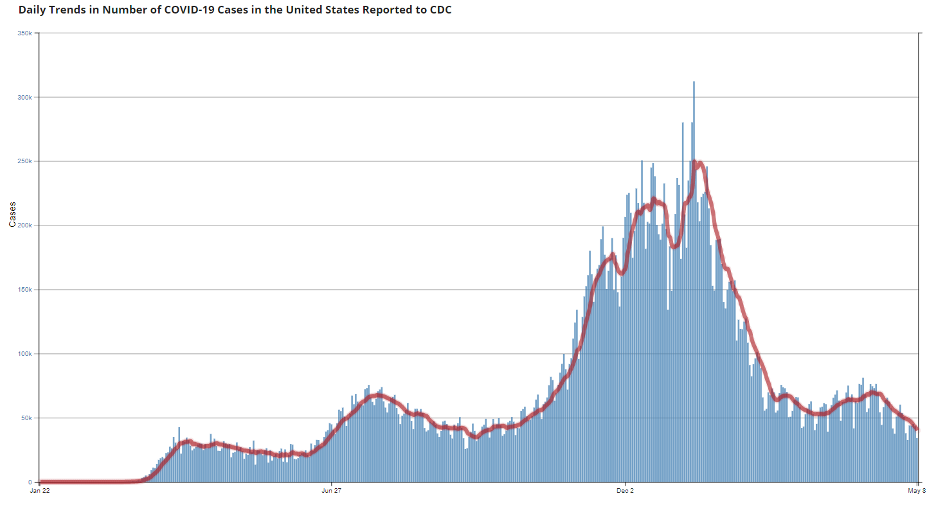 More than half (52%) of the adult population, or 137 million people, have been fully vaccinated in America. The national vaccination rate is 63%.

States are now focused on reaching a 70%+ vaccination level. Public health authorities are telling government leaders that states should be able to safely reopen once this threshold is reached. 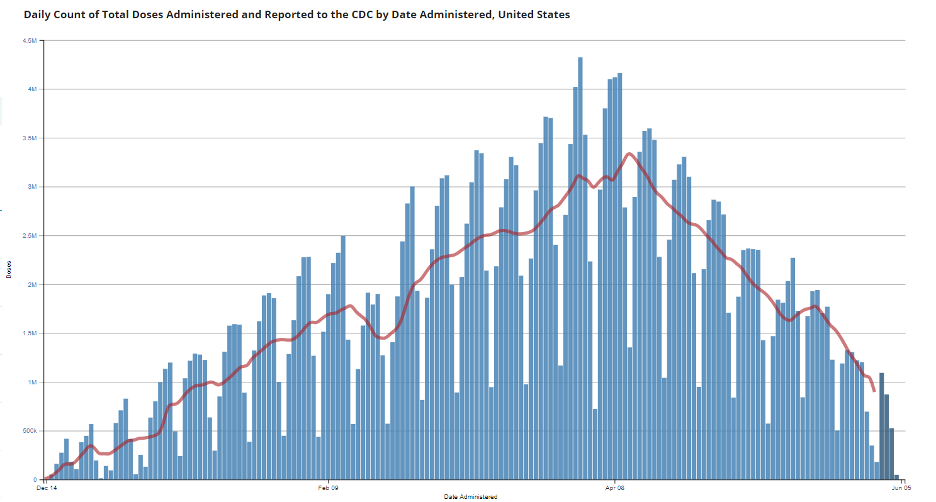 The Labor Department reported that weekly unemployment claims fell to 385,000 last week. As we can see in the bar chart below, the trend has been steadily declining for several consecutive weeks. However, the number of weekly claims is still well above the level before the pandemic (220,000). 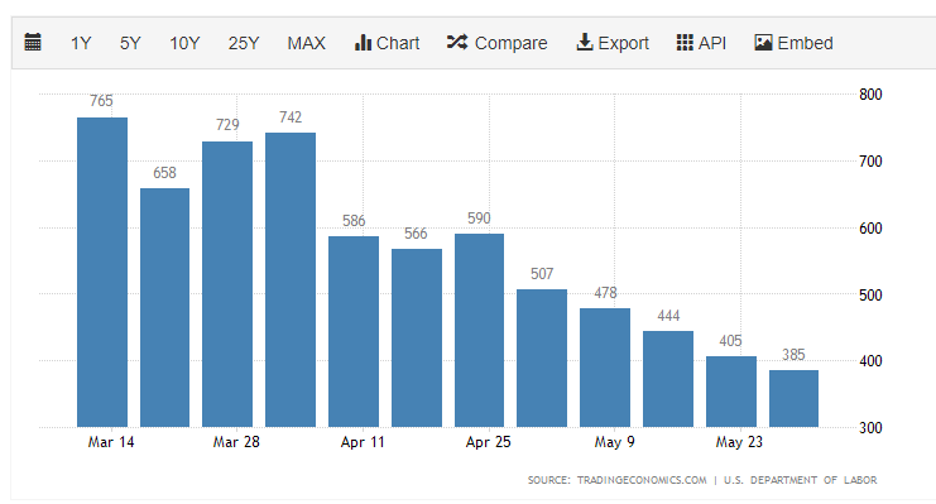 There were still 9.3 million people who are employable and unemployed in May. Overall employment is still down 7.6 million jobs compared to the pre-pandemic levels of February 2020. The labor force participation rate declined from 63.3% in February to 61.6% in May. In May there were 15.4 million Americans receiving unemployment benefits, down 4 million from the first week of March. This data suggests that there is still significant slack in the labor market. The Federal Reserve continues to signal that it will maintain highly accommodative policies in an effort to drive down unemployment.

The good news for workers is that hourly wages rose 2% from a year earlier. 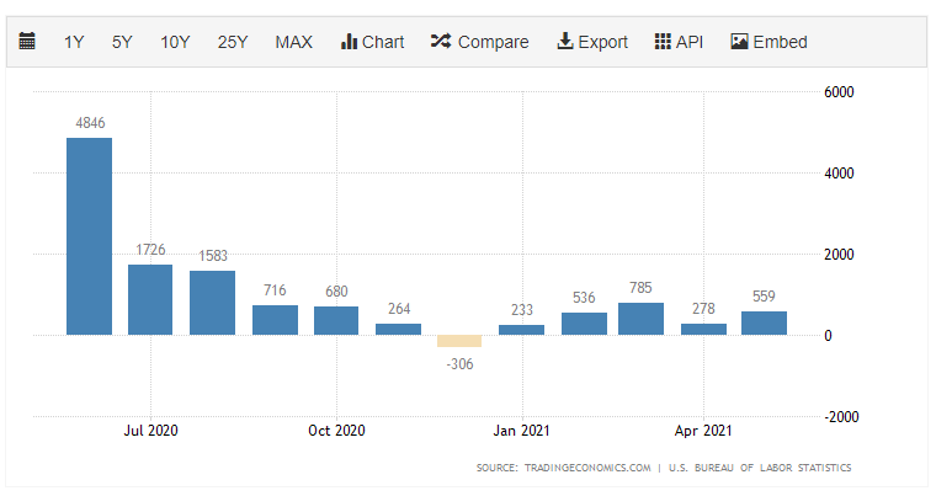 The unemployment rate dropped from 6.1% to 5.8%. The economy is caught in an odd dynamic in which millions remain unemployed and yet businesses are unable to hire qualified workers.

Economists believe there are several reasons for this disconnect. Many workers are unwilling to accept pay that is lower than the extended and enhanced unemployment benefits they have been receiving. Other workers have been unable to secure care for their children and have chosen to remain at home with them rather than return to work. Still other workers are concerned about their personal safety at the workplace.

The labor market will continue to adjust as states curtail unemployment benefits, employers improve worksite safety and businesses increase wages to lure workers off the sidelines.

Overall, these employment numbers suggest to investors that the Fed will not change its approach to supporting the economy. New York Fed President John Williams told Yahoo Finance that “we’re still quite a ways off” from winding down the massive bond-buying program. The Fed has been purchasing $80 billion a month in Treasury bonds and $40 billion a month in mortgage-backed securities since June 2020. It has held short term interest rates near zero since March 2020. The Fed wants to see “substantial further progress” in the labor market before ending the bond buying program.

As mentioned above, negotiations between the Biden administration and Republicans over an infrastructure spending package will soon come to a head, probably this week. Last week Republicans increased their offer to $928 billion over eight years to update roads, bridges, rail and transit systems. But only $257 billion of that amount is new spending. President Biden has offered a reduced package of $1 trillion (down from $2.3 trillion) and alternate ways to pay for it. He would still like to see the corporate tax rate raised to 28% from 21%. But Republicans are adamantly opposed to that.

We could see the Democrats shift gears and pursue a path of reconciliation. This would allow them to pass the infrastructure package with a majority vote in the Senate. They would avoid a filibuster. But this kind partisan action is controversial, and President Biden would prefer a bipartisan agreement.

Investors need to keep an eye on inflation. There are many signs of it … in the grocery store, at the gas pump, at auto dealerships, and at restaurants and bars.

If inflation proves to be sustained, the Federal Reserve will be eventually forced to ease back on its support of the economy. When that happens, we’ll see how strong the stock market is standing on its own.