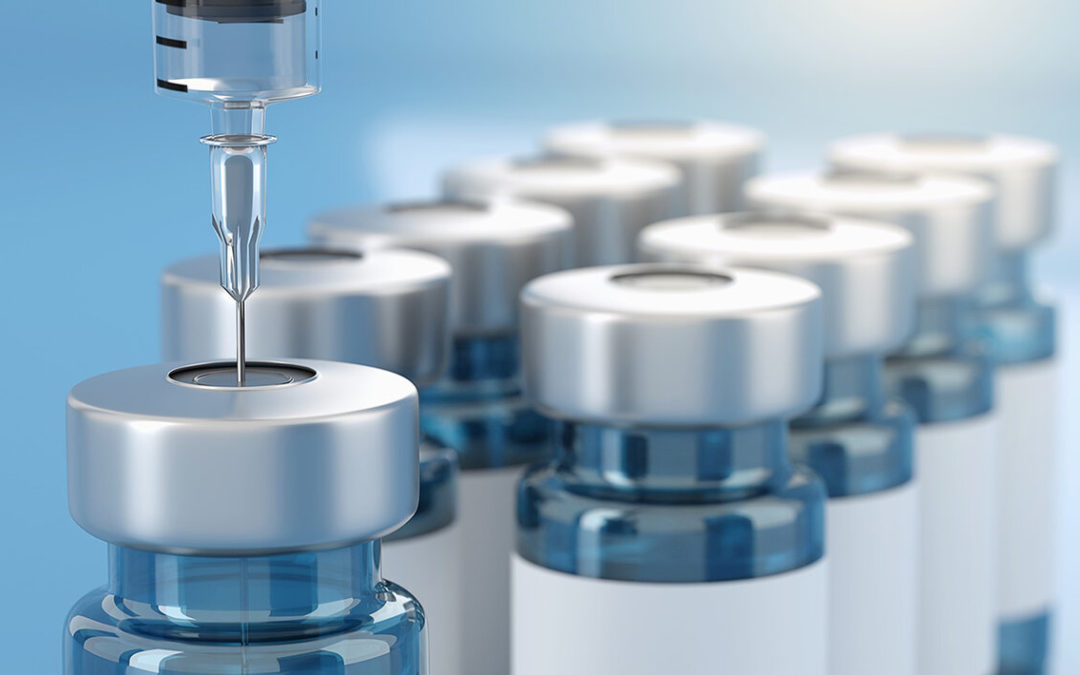 On this day in 1941, the United States was attacked by the Japanese at Pearl Harbor in Hawaii.

The attack killed 2,403 U.S. personnel, including 68 civilians, and destroyed or damaged 19 U.S. Navy ships, including 8 battleships. It marked the United States entrance into World War II. We would eventually lose over 291,000 Americans in World Warr II.

Sometime toward the end of last year, a previously unidentified virus which was eventually named SARS-CoV-2, secretly invaded our country and began attacking our citizens. This virus has been unrelenting. Last week, on December 3, we lost over 2,800 Americans. Yesterday, we lost XX lives. So far, we have lost over 280,000 of our fellow citizens.

Yet, there is hope in the form of promising vaccines and therapeutics. While our hospitals are at or near capacity and the numbers of those testing positive continues rise to previously unthinkable numbers, it does appear that we are gaining the upper hand in this battle.

If all goes well, sometime in the second half of 2021, the government will have offered vaccination to all Americans. Hopefully, the rate of acceptable will be high and we gain immunize ourselves against COVID-19.

This graph shows us the rise of large cap US stocks over the course of the year. Note the massive sell-off in March and the steady recover in the months thereafter.

Globally, across 213 countries and territories, there have been over 66 million confirmed cases and over 1.5 million deaths. In the United States, over 14 million have been infected and over 280,000 have died. 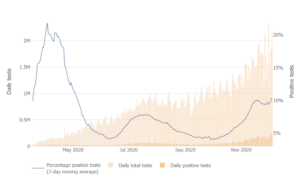 The virus is threatening to overwhelm our health care system. There now over 100,000 people hospitalized with the virus. 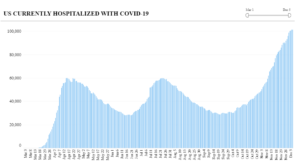 The Department of Health and Human Services reports that 20% of all hospitalized people have COVID-19. Hospitals are dealing again with staffing shortages, medical supply deficiencies and bed capacity constraints.

One of the reasons we are in this unfortunate state is that Americans have grown weary of all the actions they must take to protect themselves and their fellow citizens. Hand washing. Physical Distancing. Avoiding large gatherings. Wearing a mask. Avoiding closed, populated areas where circulation is poor.

In addition, as the weather has grown colder, winter approaches and the number of hours of daylight has dropped, people are increasingly indoors with others.

The Thanksgiving holiday provided an opportunity for Americans to disregard the guidance of health experts across the country and many did. The Transportation Security Administration reported that 1.2 million people traveled through US airports on the Sunday following Thanksgiving. This was the highest level of traffic since March. In addition, millions of Americans traveled on roadways to gather with family and friends. Given the incubation period of the virus, it will be another week or two before we know the extent to which this behavior increased the rate of infection across the country.

There was news of progress in the development of monoclonal antibodies to treat the virus. These antibodies are lab-made proteins that mimic the human immune system’s ability to battle infection. Once they are available, they should reduce hospitalization and emergency room visits.

This treatment must be given early in the course of the disease and requires an hour-long intravenous infusion, followed by at least an hour of monitoring for a severe reaction.

There was more good news about vaccines last week, as Moderna announced it would file for emergency use authorization from US and European health authorities. Moderna’s vaccine is 94.1% effective in preventing COVID-19 with minimal side effects.

This follows the earlier announcement that Pfizer and German pharmaceutical company BioNTech had filed with the Food & Drug Administration for emergency use of their vaccine.

These drugs now go before a panel of independent experts: The Vaccines and Related Biological Products Advisory Committee. The panel meets on December 10 to review the Pfizer-BioNTech vaccine and on December 17 for the Moderna drug.

Drug maker, AstraZeneca, also has a vaccine that is in advanced trials. Other vaccines are in development.

The federal government will purchase 100 million doses of Moderna’s vaccine for $1.5 billion. The government has similar agreements in place with Pfizer, Johnson & Johnson and AstraZeneca.

The greatest logistics operation in mankind’s history is about to unfold as government and humanitarian organizations work to vaccine the world’s population. One of the biggest objectives is to get the vaccine to those who need it the most.

The Advisory Committee on Immunization Practices guides the CDC on vaccine schedules and also votes on how to prioritize populations in vaccination. The committee seeks to maximize the benefits and minimize the harms of vaccines, promote justice, mitigate racial and economic inequities and ensure transparency. This committee advised last week that health care personnel, essential workers, adults with high-risk medical conditions and adults 65 years old and older should receive the first vaccinations. Ultimately, each state will make decisions about how the vaccines are distributed. But look for them to follow the CDC’s guidance.

It is expected that there will be 20 million doses of the Pfizer and Moderna vaccines by year end. Each vaccine requires two doses over the course of a few weeks. Health authorities anticipate that vaccines will be available to the general public in the spring or summer of next year.

COVID-19 continues to disrupt the job market. The number of Americans applying for unemployment benefits fell from 787,000 the prior week to 712,000 for the week ending November 28. Before the pandemic, unemployment claims each week averaged around 225,000. 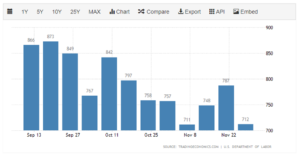 The total number of people who continue to receive traditional state unemployment benefits declined from 6.1 million to 5.5 million, down from the peak of 23 million in May. Many Americans have found jobs, and many have run out of unemployment benefits. Unless Congress acts, more than 9 million unemployed people will be left without any jobless benefits at the end of the year.

The Labor Department reported on Friday that the economy added 245,000 jobs in November. This was far less than the 425,000 economists expected. It was also much lower than the 638,000 that were added in October.

There are still nearly 10 million fewer jobs than there were in February. The unemployment did fall from 6.9% to 6.7%. But the decline is misleading. Many people are no longer looking for a job, because they are taking care of family members or have simply given up on finding suitable employment. These people are no longer consider unemployed. There are so many people making this decision that the labor participation, the share of Americans 16 years and older working or seeking work has fallen to 61.7%, the lowest since the 1970s.

The prospects for another economic relief package have been growing for weeks. It appears that the White House, Senate, and House are beginning to converge around a $908 billion package which will provide much-needed aid to individuals, business and governments.

President-elect Biden has indicated that he supports the package. He also stated that more must be done once his administration enters the White House in January.

There continues to be unusual friction between the Federal Reserve and the Treasury Department. Fed Chairman Powell and Treasury Secretary Mnuchin both testified before Congress last week and it is apparent that they disagree about the need for monetary policy to address the fallout from the pandemic. The Treasury Department has begun shuttering programs that were launched in the spring. The Federal Reserve has indicated that the need for monetary support remains and that it is too soon to begin withdrawing it.

President-elect Bid has indicated he will appoint Janet Yellen as his Treasury Secretary. Yellen and Powell will likely act in concert to provide continue to support to the American economy.

Merriam-Webster’s announced last week that the word of the year: pandemic. Shocking, isn’t it?