Prudence in the Midst of Eagerness to Reopen

A restaurant bar reopens during the coronavirus pandemic

The country is beginning to open up and, given the federalist nature of our government, it is happening in a patchwork manner.   States, counties and cities are slowly relaxing their strict physical distancing measure and they are doing so in a largely uncoordinated manner.  Some government authorities are following the guidelines provided by leading healthy policy experts.  Others are taking a different path.

The stakes are high. If we do not, as a nation, generally get this right, we run the risk of a rebound in cases of the novel coronavirus.  During his testimony before Congress earlier this week, Dr. Anthony Fauci, Director of the National Institute of Allergy and Infectious Diseases, expressed his concern that some parts of the country are opening too quickly.  Last week The New York Times found that most of the states that are reopening do not meet the White House’s Guidelines for Opening America Again.  One of the key guidelines is that the area is experiencing a 14-day downward trajectory in new cases or positive test rates. 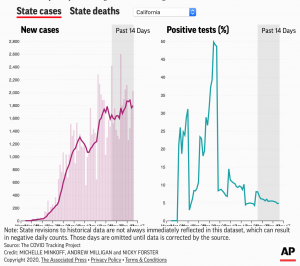 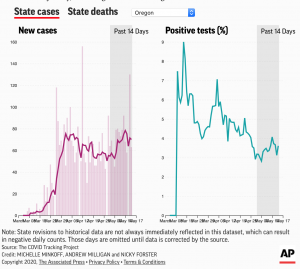 Unemployment Continues to Rise
The Labor Department reported yesterday that another 2.9 million workers applied for state unemployment benefits. This brings the two-month total to 36.5 million.  It’s hard to believe that just a few months ago we had the lowest unemployment since the end of World War II.

The good news is that unemployment claims have been steadily declining each week.  At some point in the not-too-distant future, these claims will bottom out.  We can already see employees returning to work in many industries.

Retail Sales
With virtually everyone hunkered down at home, we shouldn’t be surprised that retail sales have taken a hit.  People are not dining out, drinking at bars, heading to the movie theater or visiting malls.  This morning, the Commerce Department reported that retail sales plunged by 16.4% in April, the largest decline since 1992 when the government began tracking the data.  Not surprisingly, online sales actually increased by 8.4%.

White House Coronavirus Task Force
The President held a press conference earlier in the week and it was all about testing.  He was joined by Dr. Brett Giroir, from the US Public Health Service Commissioned Corps, and Brad Smith, the Director of the Center for Medicare and Medicaid Innovation.  They spent most of the briefing providing an update on the nation’s ability to test for the virus.  They claimed that the nation is now conducting 300,000 tests per day and that America is now the global leader in testing, both in gross numbers and per capita.  The President said that the states (territories and tribes) have been given $11 billion to enhance their testing capability.

Testing and Tracing Reality
The reality of actual testing across the country is inconsistent with the messages coming from the Administration and it’s really difficult to understand the disconnect.  The Covid Tracking Project shows testing results on a daily basis. This data is consistent with numbers presented by the White House.

However, a variety of sources suggest the country needs to be conducting far more tests in order to fully understand the extent of virus spread and immunity, and to quickly jump on infection flare-ups when they occur.  The Harvard University Global Health Institute suggests the US needs to conduct 6 million tests every week.  President Trump said two weeks ago that the country would soon have the ability to run 5 million test per day.  More recently, Admiral Giroir has suggested that the nation will be able to perform 40-50 million tests per month in the fall.

In addition to testing, the nation needs to be able to act quickly when new cases are detected.  The infected person must be quarantined and treated.  All who had contact with the infected person must be identified, informed and isolated for 14 days.  The Johns Hopkins Center for Health Security projects that the nation will need 100,000 contact tracers to find these people.  The states are scrambling to hire and train enough contract tracers.  While it’s not known how many there are, it’s apparent that there are not nearly enough.

The stock market continues to process rapidly-evolving information about the virus and its impact on the economy. The big driver this week was the testimony of the Chairman of the Federal Reserve, Jerome Powell, before a Congressional committee.  Powell warned of a prolonged recession unless more is done by Congress and the Administration to aid the economy.  The Fed is concerned about the enormous number of people who are unemployed and the ability of businesses to withstand additional financial losses.

Additional Financial Relief
As we’ve mentioned, the House has drafted an 1,800-page package of measures to provide additional financial support.  The package, the fifth since the pandemic began, is enormous and totals $3 trillion in aid.

The package includes $1 trillion for states, territories and native American tribes.  It would fund an additional, larger round of direct payments to Americans with $1,200 for individuals, $2,400 for married couples and $1,200 for each dependent child (up to a maximum of three).  The bill would also extend the additional $600 per week in enhanced unemployment benefits until January.  It includes $175 billion for housing assistance to help Americans pay their rent or mortgage.  There is also $75 billion for virus testing, and $200 billion for hazard pay for essential workers.  The package also includes $25 billion in additional funding for the Postal Service, $3 billion for mental health support, and $400 million for the Census Bureau.

We are hearing this morning that the House will vote on this bill today.  It will likely pass along party lines.  However, the Senate has indicated that there is no motivation to draft companion legislation.  If and when the Senate acts, it will insist that any new package include legal liability protection for businesses whose workers contract the virus.

The Bottom Line
We will continue to say this: the path forward lies in accurate data.  We must be able to test comprehensively and accurately.  Those who are infected must be isolated and given proper medical care.  Robust contract tracing is imperative, to identify those who have been exposed to the virus.  Those individuals must be isolated for at least 14 days.  We must be able to do these things at levels indicated by leading health policy experts, not by government officials who lack an understanding of the nature of a pandemic.

Ultimately, we need treatment and we need a vaccine.  But until these are available, we must contain the virus and prevent embers among us from erupting into a devastating conflagration.

It really is this simple.  Those who argue that defensive public health policy measures are destroying our economy do not understand that, if we open up prematurely, we will experience far greater economic damage over a longer period of time than we have to this point.  We cannot abandon our efforts prematurely.

Gratitude
We will wrap up this week’s correspondence from Springwater, with three things for which we are grateful:

Have a great weekend.