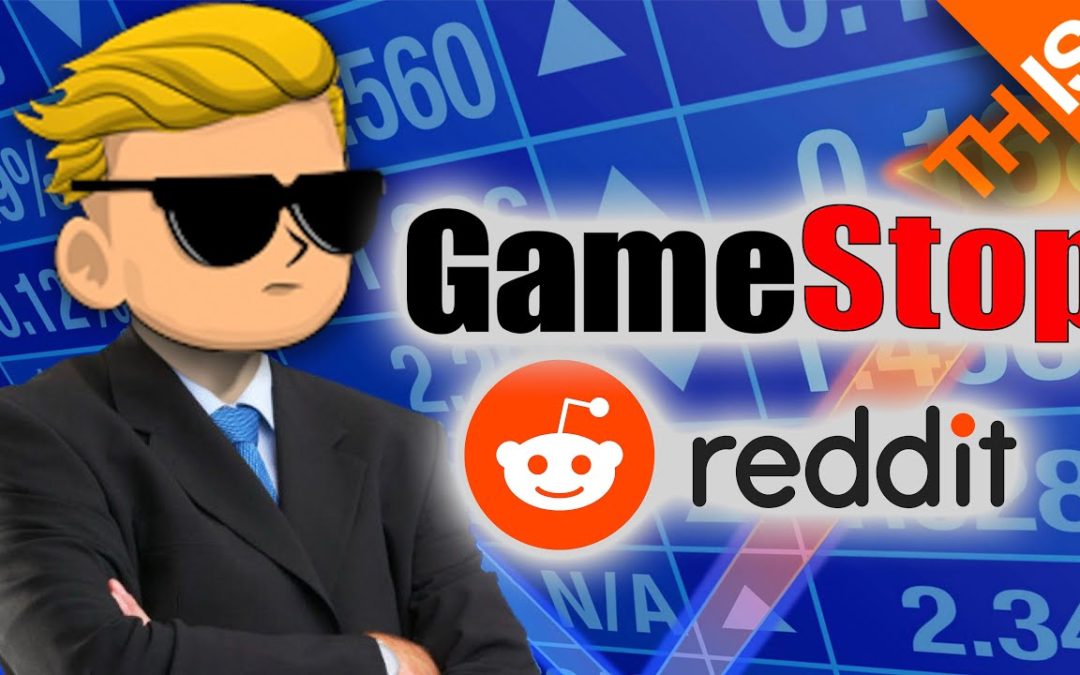 The stock market’s big news last week was a skirmish between small investors and a few large hedge funds over the fate of video game retailer GameStop. It seems that these big hedge funds decided to short GameStop’s stock (sell borrowed shares of the stock) based on their analysis of the value of the company and their conviction that the stock would fall.

However, inspired by the positive assessment of GameStop by a few flamboyant personalities posting on social media (Reddit), a group of small investors began buying GameStop’s stock on online trading platforms like Robinhood. The movement quickly grew and became manic with GameStop’s stock price rising from less than $20 at the beginning of the year to as high as $380 last week. GameStop was up 400% for the week. 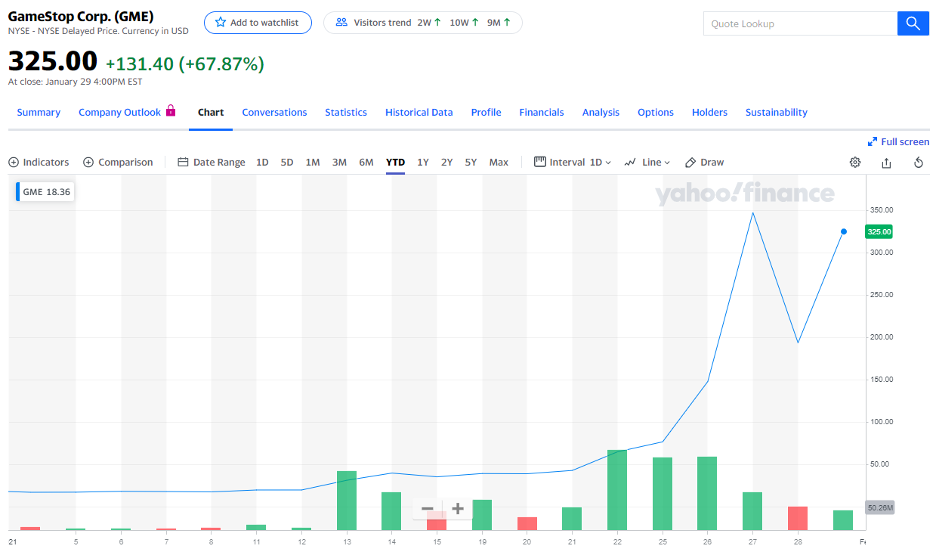 Many of these small speculators have made substantial gains and a few have become wealthy almost overnight. However, the hedge funds know more about GameStop than the day traders and eventually the fundamentals of the company will drive the price of its stock, and not speculation. When that finally happens, many, if not most, of these small investors will incur substantial losses.

We marvel at these episodes of mania in the market. Such incidents have taken place many times over hundreds of years. They all start with wild speculation and end in disaster for all but those who get out at the top. Several books have been written about these episodes.

The broader markets were pulled into the trading frenzy that took place in GameStop and a few other battered stocks that got the attention of market speculators.

The Virus Remains the Focus

As has been the case for nearly a year, the novel coronavirus is the story. While the number of cases, hospitalizations and deaths are beginning to decline, we are far from the end of the pandemic.

There are two highly effective vaccines, one from Pfizer-BioNTech and another produced by Moderna, in distribution in the United States. The federal government and states are desperately trying to get these vaccines distributed. However, the process has not gone smoothly.

The supply to states has been uneven. At times, vaccination sites have had excess supplies of vaccine. At other times, supplies have been inadequate. The pharmaceutical companies appear to be meeting their contractual agreements to supply vaccine. However, the distribution and delivery of the vaccine across the country has not gone well.

In addition to the challenges of getting the vaccine distributed, the virus is mutating rapidly. There are now variants identified as having originated in the United Kingdom, Brazil, South Africa and California that are well established in the US. This presents multiple problems. These mutations appear to be more infections and they may be more deadly than the original strain of the virus. We do not know how effective the existing vaccines will be against these variations and other that will almost surely emerge. The pharmaceutical companies are already working on modifications to their vaccines and exploring the introduction of booster shots.

Several federal health officials have indicated that the government will need to vaccinate more Americans than was originally anticipated to achieve herd immunity. This will be difficult, not just because the vaccines are still not widely available. Surveys continue to indicate that many Americans are either unwilling to get vaccinated or plan to wait until any lingering doubts about the safety of the vaccines has been removed. No one really knows how long that will take.

Let’s get into the numbers. We will see that things are improving.

Globally, across 213 countries and territories, there have been nearly 103 million confirmed cases and over 2.2 million deaths. In the United States, over 26 million have been infected and over 441,000 have died.

The number of new cases of COVID-19 per day has dropped below 200,000 for almost two weeks. The trend is very encouraging. 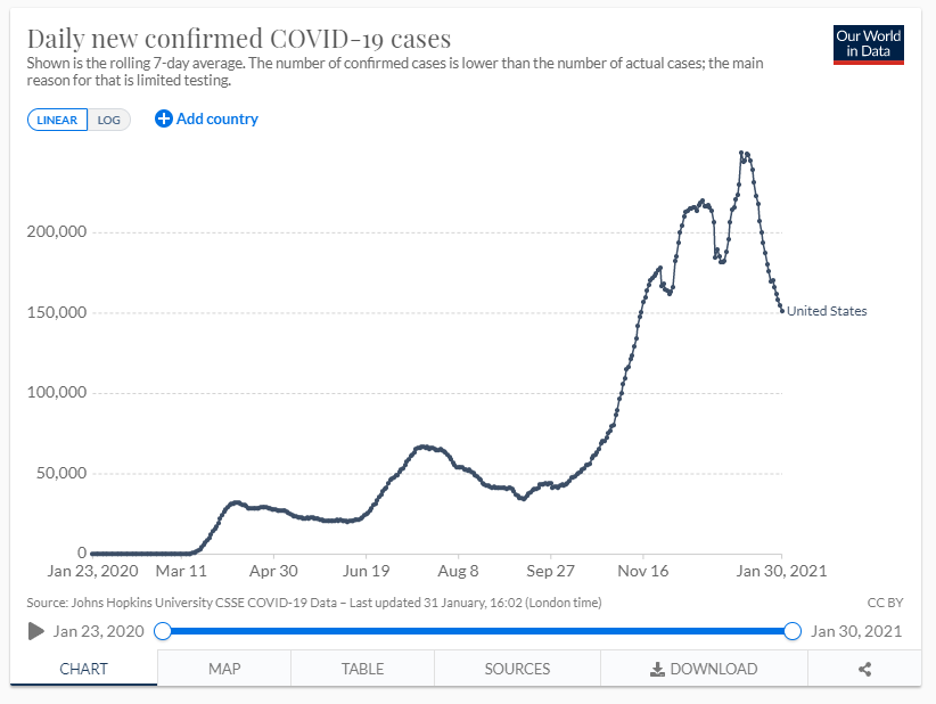 The number of tests given is still not where it needs to be. But the positive test rate has fallen significantly and continues to trend in the right direction. 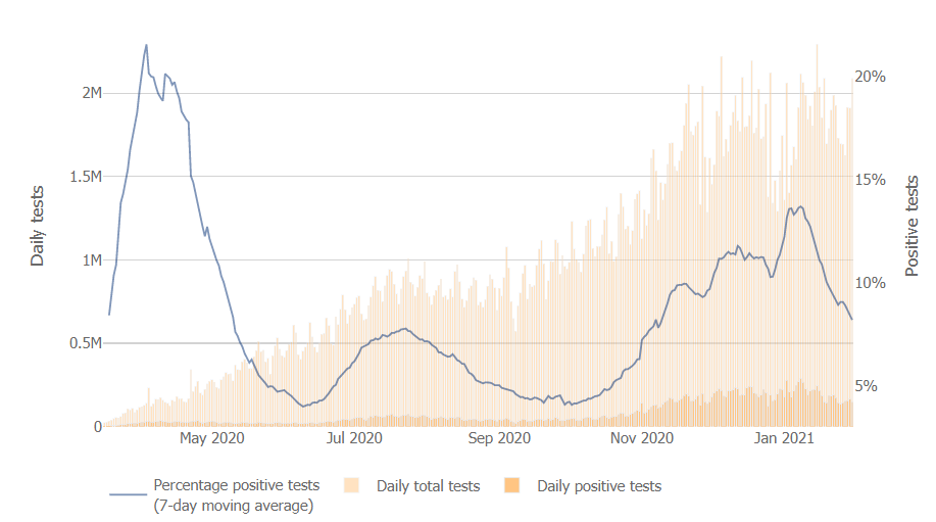 The hospitalization rate remains elevated. But, it, too is heading down. 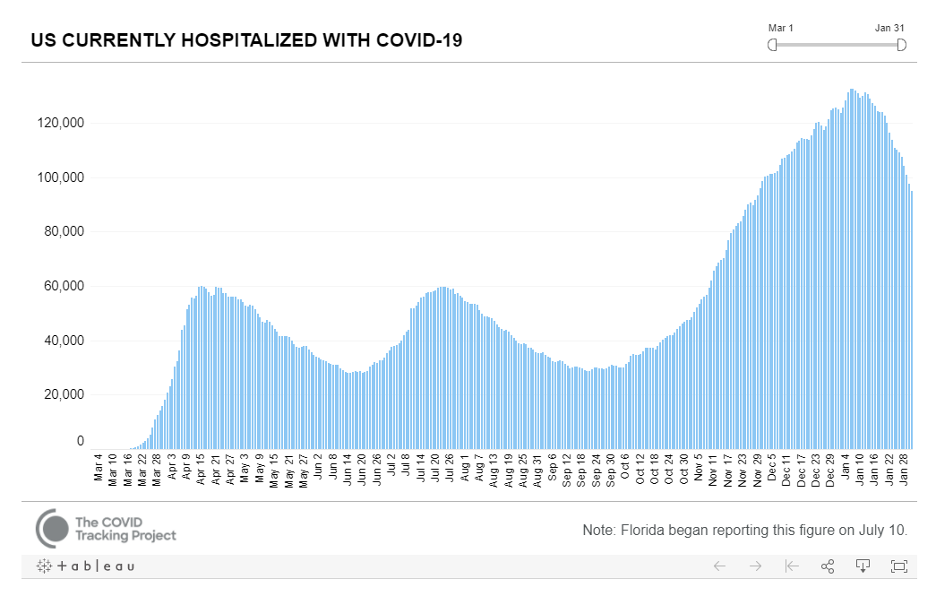 We have become somewhat desensitized to the number of our fellow citizens who have succumbed to the virus. The numbers remain very high. However, they appear to have crested and are now slowly easing. 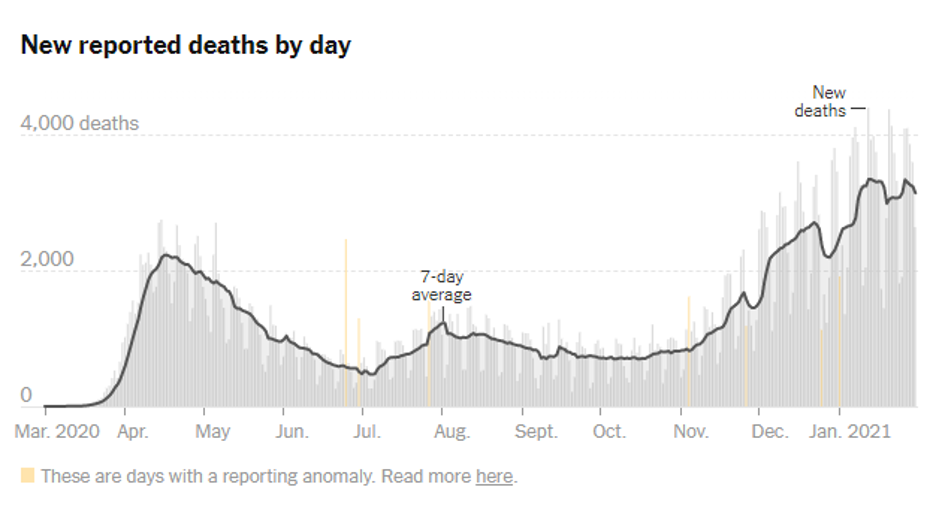 The Institute for Health Metrics and Evaluation (IHME) at the University of Washington projects that a total of between 563,000 and 653,000 American will die from the virus by May 1, 2021. The variance is driven by mask usage, vaccinations, and other containment strategies.

If you want to see a summary of this data since March 1 of last year:

When President Biden entered the White House, he set a goal of 100 million vaccinations during the first 100 days of his administration. Here’s a comparison of the U.S. with selected large nations. 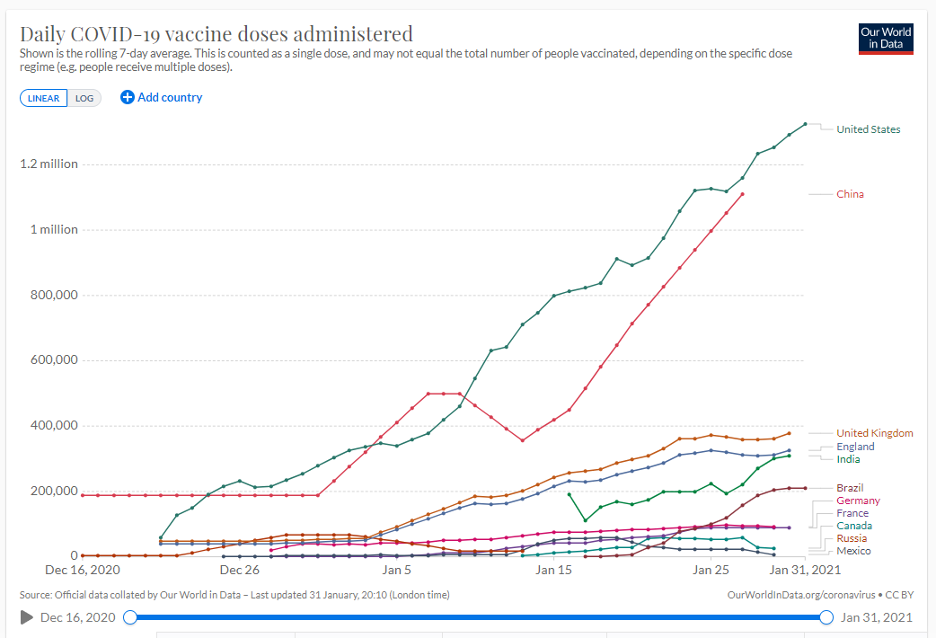 The U.S. has made great progress in getting the vaccines distributed. The U.S. has administered just under 32 million doses. But much more must be done. President Biden has indicated he would like to see the government increase the rate to 1.5 million vaccinations per day. That seems entirely possible given the current pace is about 1.35 million per day.

The number of applications for state unemployment benefits fell last week and have trended downward for three consecutive weeks. However, they remain far above pre-COVID-19 levels.

The number of Americans who filed for continuing unemployment benefits dropped by over 200,000 to 4.77 million in the week ending January 16. Of those who lost their jobs in the spring of last year, 10 million remain out of work. There are 15 million Americans relying on unemployment benefits. The jobless rate is 6.7%.

There are signs of promise in the economy.

The Wall Street Journal reported that Americans saved $1.4 trillion during the first three quarters of 2020. That was approximately 10% of 2019 household spending. Economists attribute much of this saving to Americans banking and not spending the money they have received from the federal government. The Federal Reserve Bank of New York estimates that consumers saved more than a third of the first stimulus checks that were sent last spring. The Commerce Department estimates that the personal savings rate for November was 12.9%.

Rising incomes and higher levels of savings are typically precursors to increased spending. Higher spending in turn leads to more hiring by businesses. Because the consumer drives two thirds of the economy, recovery seems likely.

Before he took office, President Biden proposed a massive $1.9 trillion economic relief package. He and his fellow Democratic leaders have been pushing for approval. But there has been significant push back from Republicans who believe the package is too big and too broad.

It will be interesting to see how the brinkmanship plays out. President Biden could push for approval through the parliamentary procedure known as budget reconciliation in the Senate. That would require a simple majority for passage. However, that would not be well-received by Republicans.

Negotiations continued over the weekend with 10 Republican Senators asking the President to meet with them and consider a smaller, more focused package. They are offering a $684 billion plan. The markets will undoubtedly monitor these discussions and respond accordingly.

Back to the CAPE Ratio

In the past, we have discussed the ways in which the stock market is valued. Market analysts are particularly influenced by the “cyclically adjusted price earnings ratio” or CAPE Ratio. It was developed by Robert Shiller a professor of economics at Yale University.

The CAPE Ratio uses real (i.e., adjusted for inflation) earnings per share over a 10-year period to smooth out fluctuations in corporate profits over business cycles. It is often used to assess whether the stock market is under- or overvalued. The historical average for the CAPE ratio is 17. The lowest historical level was just under 5 in December of 1920. The highest historical level was just over 44 in December of 1999. The current level is just below 34. Below is the chart for the CAPE Ratio. 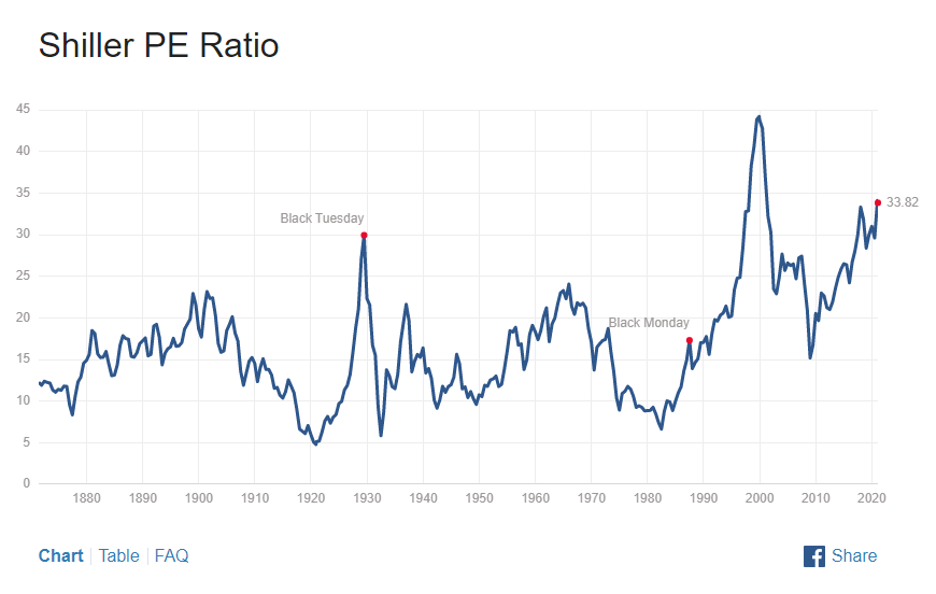 Why are we reminding you of this? Because, as you can see, the CAPE Ratio is well above the average. Many analysts believe that, when the market is extended in this manner, a correction or bear market looms.

We encourage you to remain vigilant as investors. The path ahead will be very challenging as the government grapples with the virus and attempts to reopen the entire economy.

Silver is next. Apparently large banks have significant short positions in silver (i.e. they have sold it, in anticipation of the price falling). Small investors are now piling into silver. On January 17, silver traded at $24.23 an ounce. This morning it is trading at $29+ an ounce.

We’re kidding, of course. Leave the speculation to the speculators. Maintain a globally diversified portfolio and stay focused on the long term.