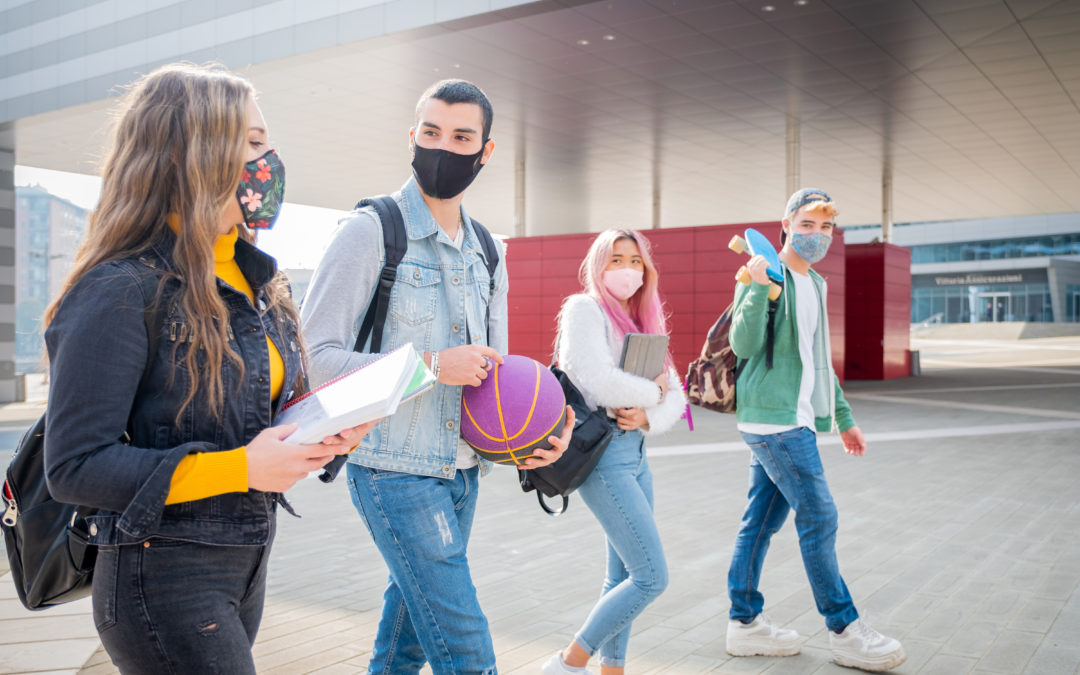 The Labor Department’s jobs report for April left investors both confused and encouraged. The report indicated that employers hired 266,000 workers last month. However, the unemployment rose to 6.1%.

Economists were expecting the department to report approximately 1 million new jobs. The optimism was based on significant gains in vaccinations, a relaxation of constraints on businesses, trillions of dollars in stimulus payments and other federal spending, and the prospect of a massive infrastructure package.

However, the lower number of new jobs suggests the economy is nowhere near overheating and that inflation remains subdued. Investors quickly shifted from disappointment to confidence that the Federal Reserve would honor its pledges to continue to support the economy with accommodative monetary policy.

Friday the yield on the 10-year Treasury Note was 1.579%. Yields have drifted lower over the past few weeks suggesting investors are less anxious about inflation.

Globally, across 213 countries and territories, there have been over 148 million confirmed cases and nearly 3.3 million deaths. In the United States, over 32 million have been infected and over 581,000 have died. The virus continues to decimate India and Brazil.

The number of new COVID-19 cases continues to decline as more Americans are vaccinated.

The US as a whole: 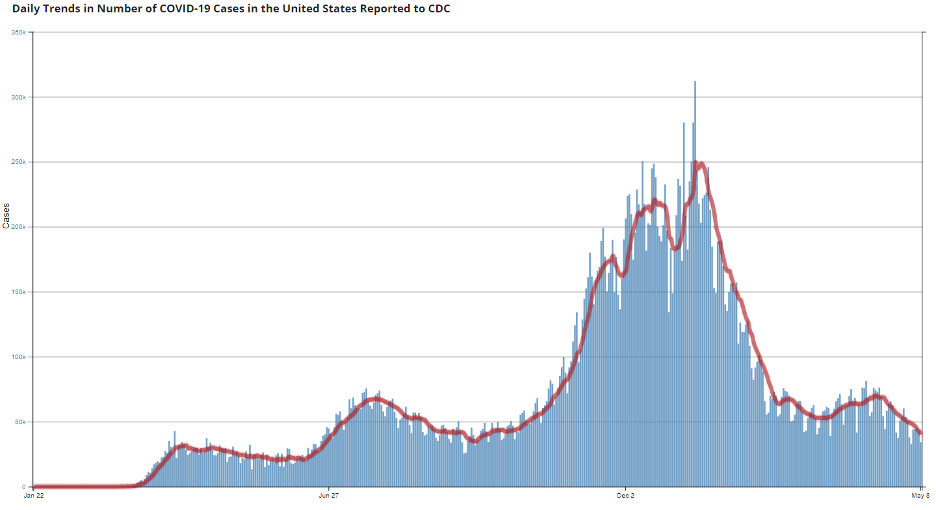 For those of us living in Oregon, the trend is now heading in the right direction: 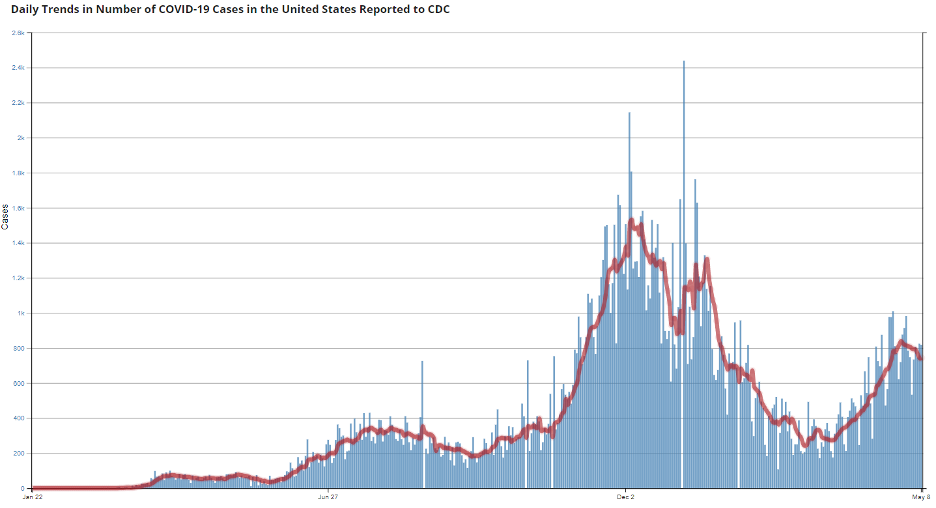 Testing continues to decline. Fewer people are becoming infected. So, fewer people have symptoms that would cause them to think they might have COVID-19. Also, the positivity test rate continues to drop. 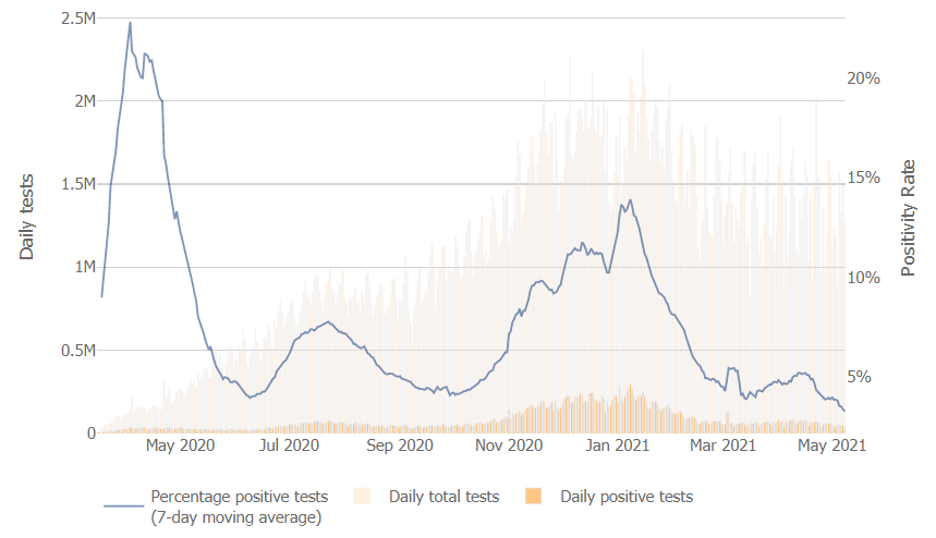 The rate of hospitalizations is dropping. This is expected as more Americans become vaccinated and, consequently, fewer become infected. 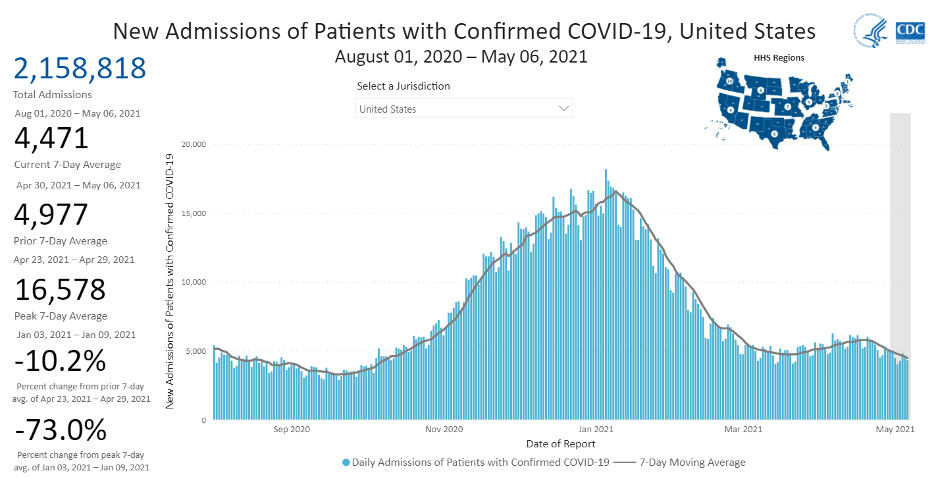 There has been a marked drop off in deaths. Again, this is what we would expect as fewer Americans are infected and hospitalized. Nonetheless, we have lost over 578,000 citizens to the virus.

The Institute for Health Metrics and Evaluation (IHME) at the University of Washington projects that a total of between 939,000 and 984,000 Americans will die from the virus by September 2021. The variance is driven by mask usage, vaccinations, and other containment strategies.

While the preceding data is encouraging, the rate of vaccination warrants concern. Over half (56%) of all American adults have received at least one vaccine dose and nearly 105 million are fully vaccinate. However, the daily rate of vaccination has slowed significantly.

There are various reasons for the slowing pace of vaccinations. Some people are not able to access centralized vaccination sites. Some people need more information from their health care providers. Some people refuse to become vaccinated for reasons that include religious objections, fear of needles, and conspiracy theories.

Last week President Biden set a new vaccination goal to deliver at least one shot to 70% of adult Americans by July 4.

The government will need to ramp up its education, awareness and promotion efforts to convince more Americans to get the shot. It will also need to make it easier for those who lack transportation to access vaccination locations. 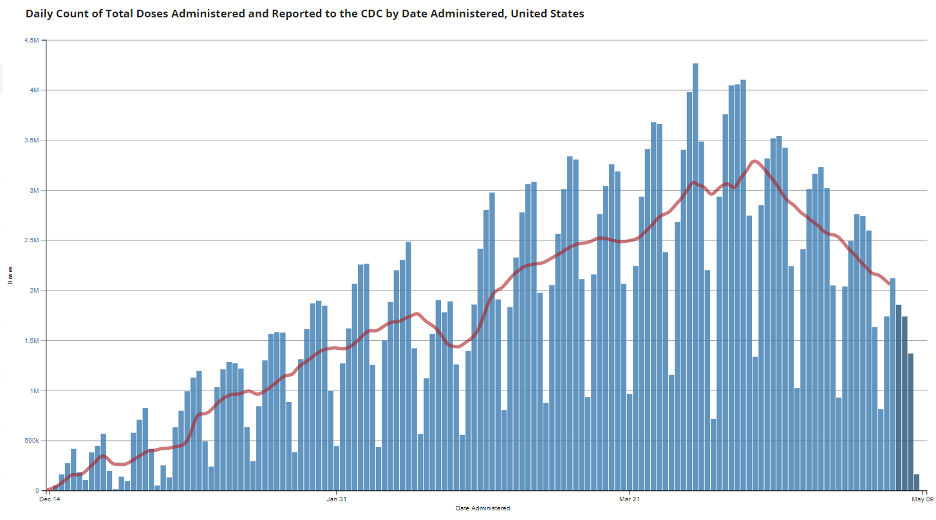 The Labor Department reported that Initial jobless claims fell last week to 498,000. This is another new, encouraging low since the beginning of the pandemic. The number of applications for the prior week were revised to 590,000.

The chart below shows the downward trend in jobless claims: 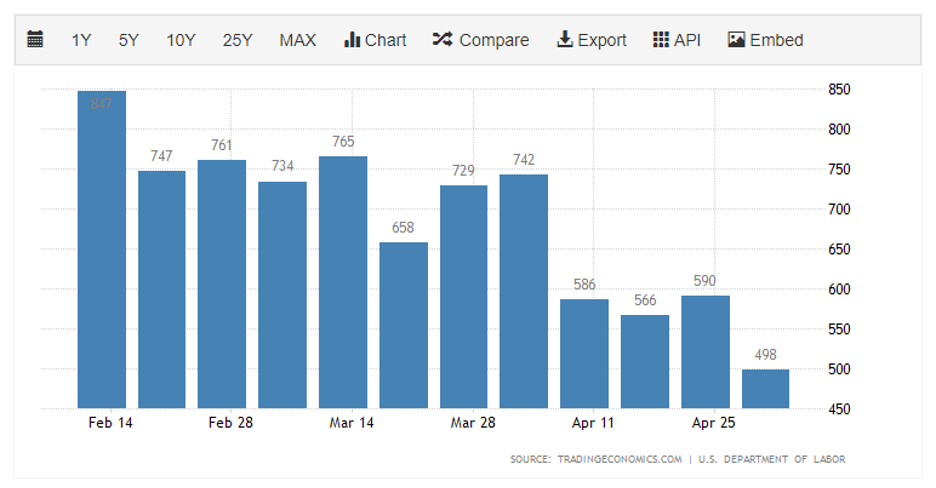 As discussed above, US employers added just 266,000 jobs in April. This was well-below expectation. There will be a lot of analysis and discussion about this miss. Also, the May numbers will be of particular interest.

The chart below shows non-farm payrolls: 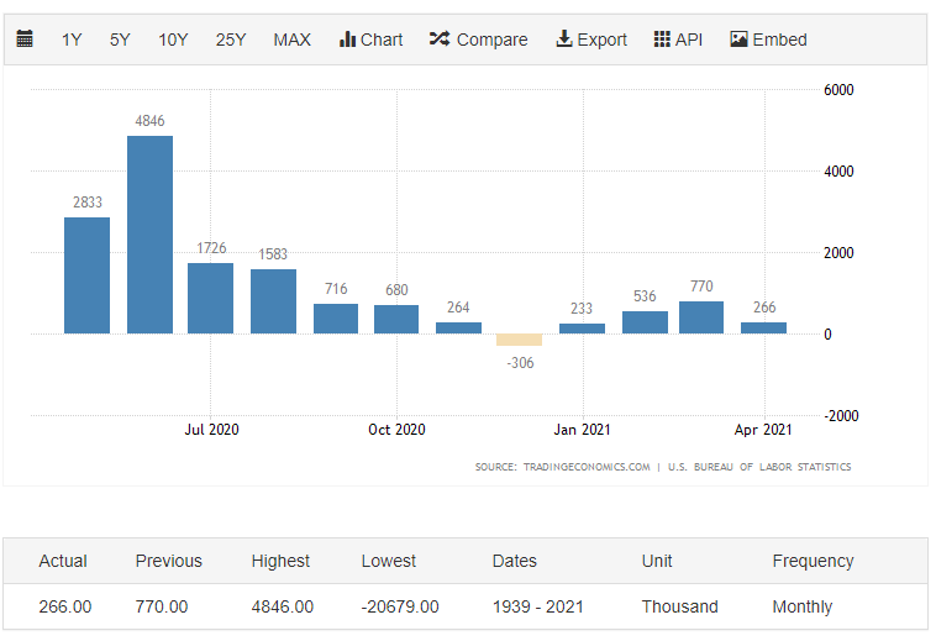 The stock market continues to rise driven by unprecedented federal fiscal and monetary policy and progress in containing the virus.

As we look head, we need to prepare for the gradual withdrawal of this federal intervention. Will troubling inflation emerge? Will stock market valuations hold up in the absence of government support? How long will the vaccinations protect those who get the shot(s)?