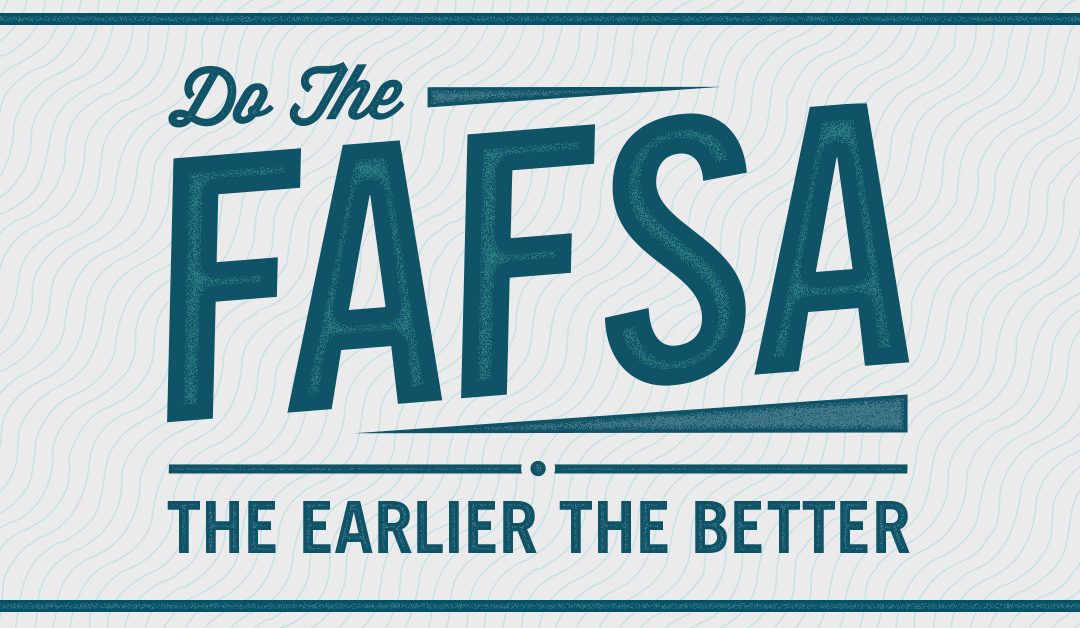 If you have kids who are in college, or who expect to enroll next fall, you should file the Free Application for Federal Student Aid (or “FAFSA”) as soon as possible. The Department of Education began accepting FAFSA applications on October 1.

According to the experts at Savingforcollege.com, October 1 is a start date and not a deadline, but students who file the FAFSA later may miss out on some forms of financial aid. The FAFSA should be filed as soon as possible because in many cases, loans and grants are awarded on a rolling basis and schools and states set different deadlines to qualify for financial aid and scholarships.

Research shows that students who file the FAFSA during the first three months (beginning October 1) tend to receive twice as much in grants, on average, as students who file the FAFSA later. This is because each college gets a fixed allocation of Federal Supplemental Educational Opportunity Grant (FSEOG) and Federal Work-Study (FWS) funding, so the available money is limited and can run out.

In addition, each state has its own FAFSA filing deadline for awarding state grants, and they can vary widely. You can use the FAFSA Deadlines Tool to find the deadline for your state.

Illinois, for example, advises filing the FAFSA “As soon as possible after October 1, 2019” for students to qualify for its Monetary Award Program since “awards are made until funds are depleted,” which is also the case for awards from 13 other states: Alaska, Indiana, Kentucky, Nevada, North Carolina, North Dakota, Oklahoma, Oregon, South Carolina, Tennessee, Utah, Vermont and Washington.

Nine other states have deadlines between December and March, including California, Maryland, Michigan and Texas.

Colleges also have their own FAFSA filing deadlines for students to qualify for financial aid, which depend largely on federal and state funds.

Many private institutions require students to file, in addition to the FAFSA, another financial form known as the CSS Profile. That form asks for additional financial information not required by the FAFSA, including the value of parents’ retirement funds and primary residences; the FAFSA does not.

The federal deadline for filing the FAFSA is much later than the deadlines set by states and individual colleges: midnight on June 30, 2021.

In order to file the FAFSA, the student and one of his or her parents each must obtain an FSA ID, which has to be renewed every 18 months.

This year’s FAFSA filing, like all those since 2017, uses information from a family’s federal income tax filing from two years earlier, which is why they can file as early as October 1.

But many families this year will not be able to use the IRS Data Retrieval Tool to automatically input tax return information.

The 2018 tax returns – the first to reflect the changes enacted by the 2017 tax law – eliminated the previous 1040, 1040A and 1040EZ forms, and replaced them with a new 1040, plus schedules to be filed by taxpayers to report additional income such as capital gains, alimony, self-employment tax, etc. The IRS Data Retrieval Tool will not automatically transfer those items to the FAFSA.