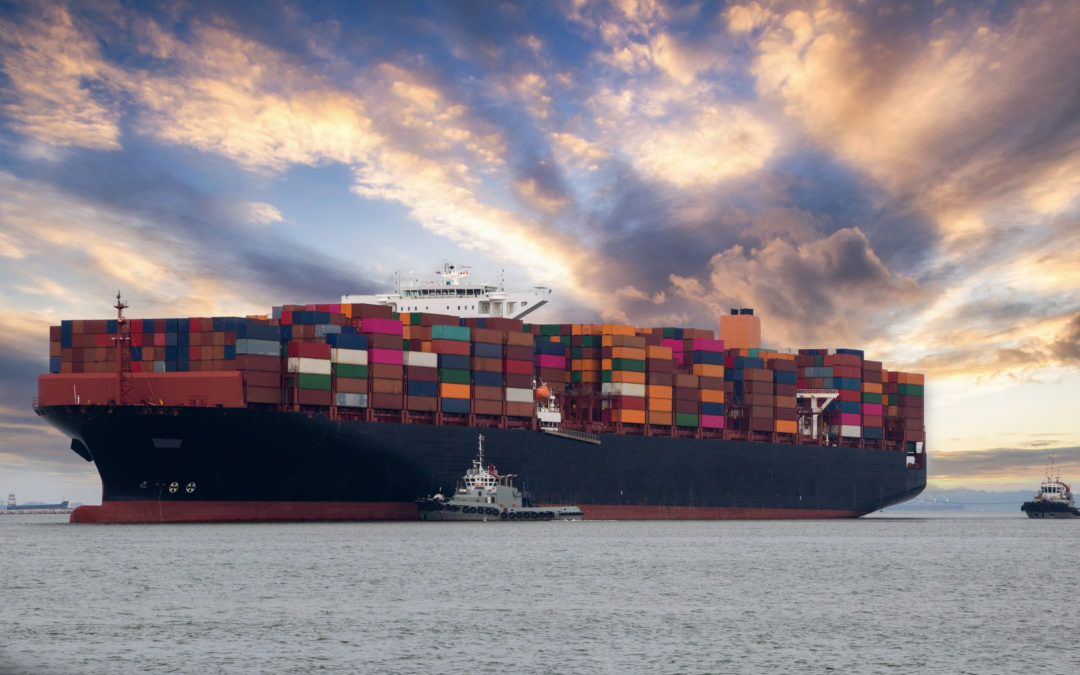 As we begin to move into the progressively shorter days of summer, the stock market seems to be entering a period of uncertainty.

US Gross Domestic Product (GDP) rose 6.4% in the first quarter. A survey by The Wall Street Journal indicates economists expect GDP to increase by 9.1% in the second quarter. This is stellar growth for the massive American economy.

But inflation is rising sharply, the Delta variant of COVID-19 is spreading rapidly among the (many) unvaccinated, and the economic recovery that began earlier this year appears to be waning.

Investors don’t like uncertainty and there are plenty of unknowns. How real is inflation? Will the Federal Reserve be forced to raise interest rates earlier than forecast? Will there be a resurgence of the virus? Will businesses be forced to retrench again? How long will it take for most of the world to be vaccinated? (We are nowhere near close.) Is the US economic recovery sustainable into the second half of this year and beyond?

West Texas Intermediate Crude futures for August 2021 delivery traded at $71.81 a barrel on Friday. Oil is up 49% year to date. Over the weekend, OPEC+ nations reached an agreement to increase production over the next few years. They committed to eliminating the production cuts they made at the beginning of global pandemic. The boost in output will be gradual, as the group of oil-producing nations monitors the global recovery.

Strong demand has been driving prices up since last November.

Yields fall as prices increase. The bond market is telling us that investors are concerned about the Delta variant of COVID-19, the Federal Reserve’s commitment to long-term monetary support and conflicting economic data. We will continue to watch the 10-year bond as a signal about where the market is heading.

Globally, across 213 countries and territories, there have been over 190 million confirmed cases and over 4 million deaths. In the United States, over 34 million have been infected and over 609,000 have died.

New cases are up 70% over the past week. They are rising in all 50 states. The trend line below tells the story.

Thankfully, the numbers are far from the peak at the beginning of the year. 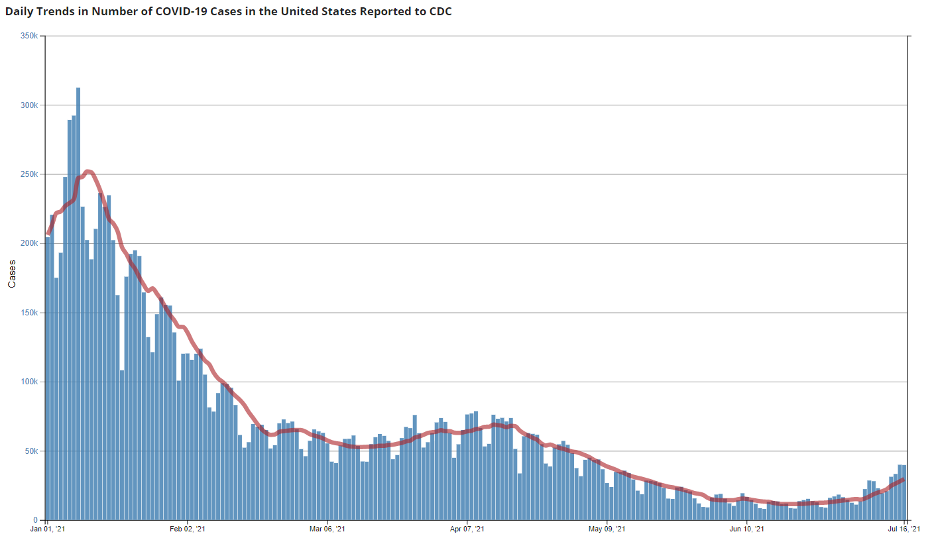 Hospital admissions have climbed 36% over the past week. As more people are getting sick from COVID-19, hospitalizations are increasing. According to the CDC, the current 7-day average is 2,205.

Deaths have risen 26% over the past week. Nearly all the people who are dying were unvaccinated. 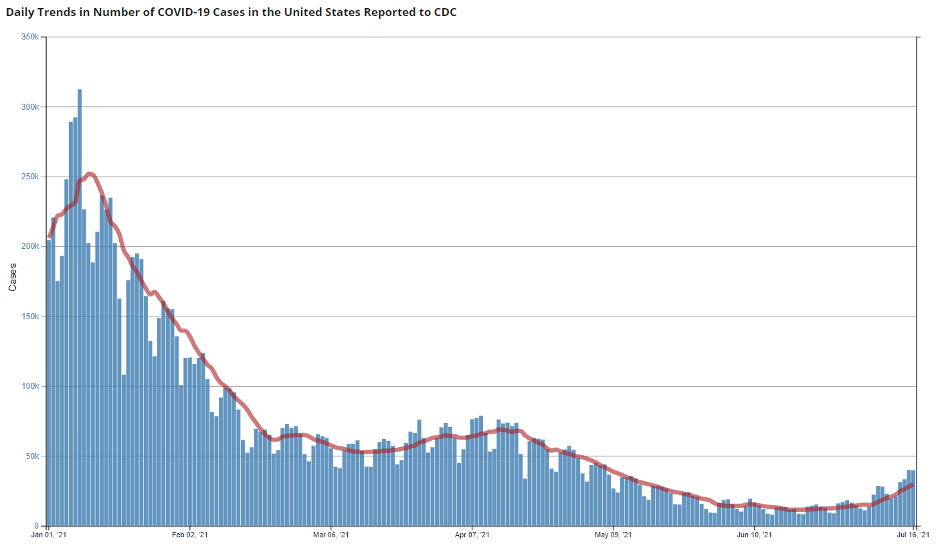 Only 48% of the total population is fully vaccinated. Until we get closer to herd immunity vaccination rates of 70%+, we will be battling COVID-19 and its variants. The government, at all levels, faces an uphill climb to get shots into the arms of those who remain unvaccinated. 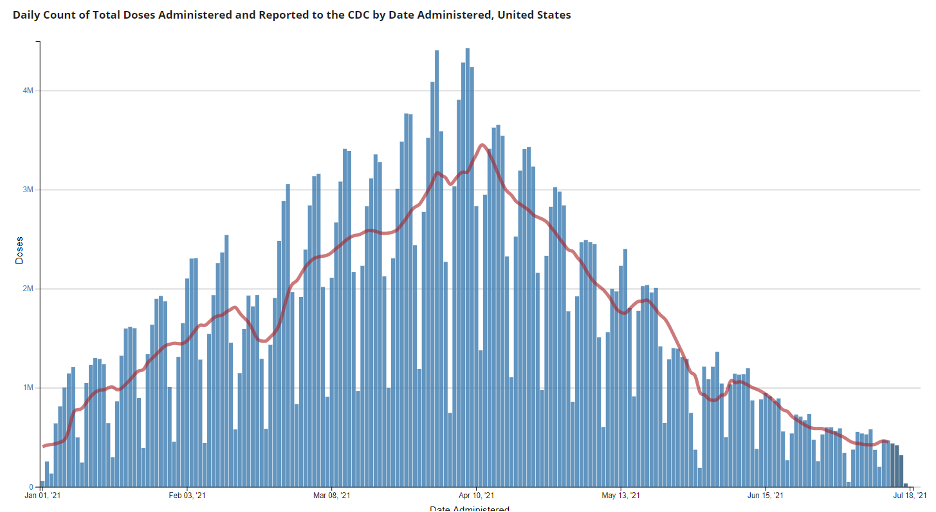 This chart shows the cumulative number of people fully vaccinated in the US. As of 2019, there were approximately 328 million people living in the US. We can see from the chart below that just over 161 million have been vaccinated. This far from where health officials believe we need to be to corral this virus. 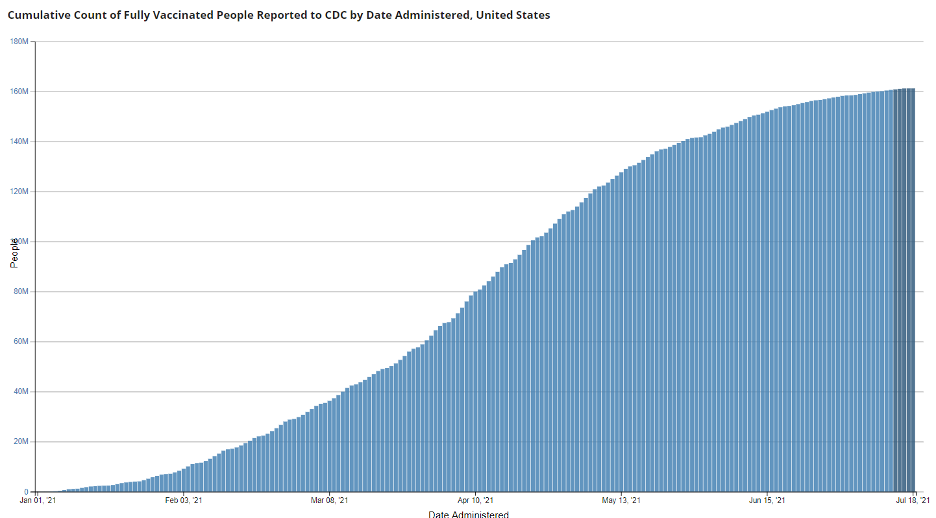 For an interactive map of the rate of vaccinations in the US: 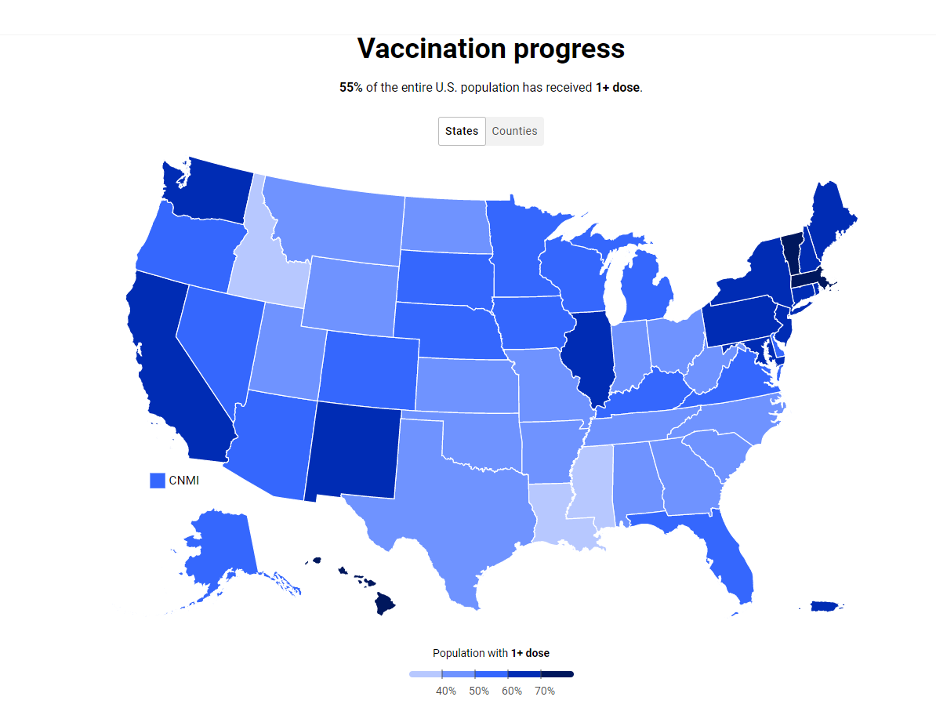 The Labor Department reported that weekly unemployment claims decreased to 360,000 in the week ending July 10. The number of applications was the lowest since the March of 2020 when the pandemic began to shut down the nation’s economy. The level of claims remains well above the pre-pandemic average of approximately 220,000.

The number of workers receiving unemployment benefits declined by 126,000 to 3.24 million in the week ending July 3. The nation’s unemployment rate is 5.9%. 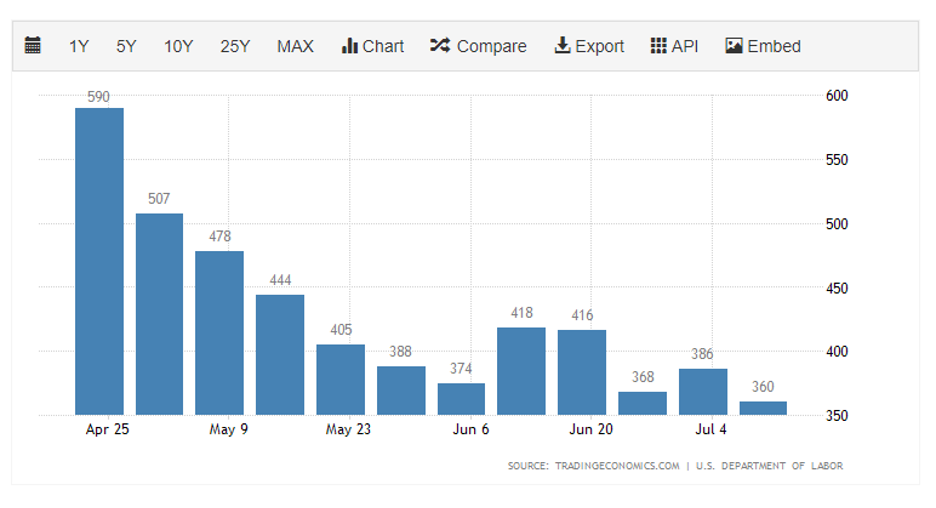 The Labor Department reported that consumer prices rose 0.9% in May and 5.4% over the past year. This represents the biggest increase in 13 years. Core inflation, which excludes food and energy costs, rose 4.5% in the past year.

The Federal Reserve continues to assert that this spike inflation is temporary. Jerome Powell, Chairman of the Federal Reserve, indicated during two days of congressional hearings last week that the central bank is alertly observing the economy. He pointed to extraordinary circumstances including a rapid increase in demand, a shortage of supply and supply chain problems as the nation’s economy reopens.

Mr. Powell acknowledged that inflation is currently well above the level at which the Fed wishes to see it. However, he maintained the spike is temporary and that it would be premature to curtail support for the economy. The Fed would like to see the nation at full employment (3.0-3.5% unemployment) and inflation moderately above 2%.

The Federal Reserve is in unchartered terrain. Chairman Powell noted that, “we don’t have another example of the last time we reopened a $20 trillion economy.” The Fed could be forced to act sooner than planned to pull back monetary support for the US economy. For now, the Fed will keep its benchmark short term interest rate pegged at zero and continue to purchase Treasuries and mortgage-backed securities to keep interest rates low to encourage borrowing and spending.

The Commerce Department reported that retail sales rose 0.6% in June from the prior month. Americans are paying more for food, gasoline and other goods.

The consumer is the backbone of the US economy. So, a rise in retail sales bodes well for the economy and for investors.

Democrats on the Senate Budget Committee agreed on $3.5 trillion spending package to enhance health care and combat poverty. The legislation will also include various tax increases on corporations and wealth Americans which will be used to pay for the spending.

Senate Democrat leaders plan to advance the package through the budget reconciliation process which requires a majority vote for passage, instead of the traditional 60 votes needed for approval.

There will be little support from Republicans for the legislation.

There is no significant news on the $1 trillion infrastructure spending plan. There is still no agreement and negotiations continue. Democrats have decided to advance the broad spending package before addressing the infrastructure bill.

We wish you a safe, relaxing summer.