Financial Planning for Divorced Women: Know What You May be Entitled to Financially 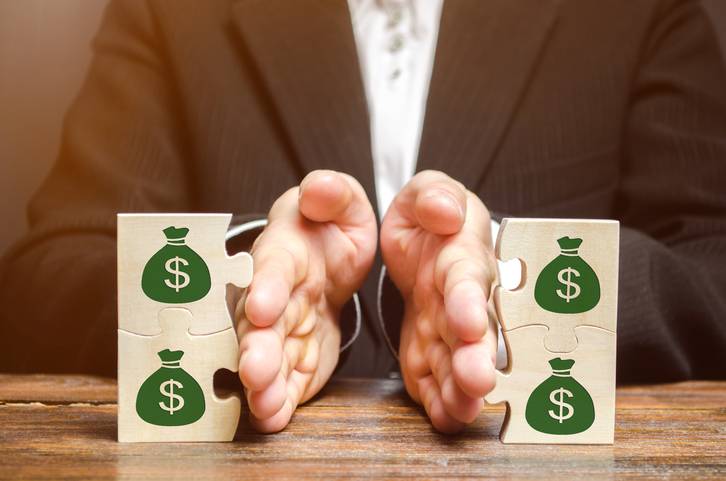 The dissolution of a marriage is often a very stressful and challenging process, and decisions on dividing assets can often exacerbate things. Understanding what you’re entitled to financially can help mitigate this stress and will help give you a clear picture of what your post-divorce financial life will look like.  Let’s review a number of financial resources to which you may be entitled, and which will help you with financial planning as a divorced woman.

Spousal support, also known as alimony, involves one ex-spouse paying the other a certain sum of money, usually on a monthly basis. A court may require spousal support payments when one of the divorcing parties is financially more stable than the other, and the other party needs some support to get their post-divorce life restarted.

Spousal support is awarded on a case-by-case basis, and the analysis is different in every situation.  Generally, you’ll only qualify for spousal support if you’ve been involved in a marriage of “longer duration” – typically 5 years or more.  In addition to the length of your marriage, the court will typically also take into consideration the following, when making the calculation to determine the amount of support:

For decades prior to 2019, the tax deductibility of alimony was a key element in divorce planning.   The payor was able to deduct his/her payments for income tax purposes, and the recipient spouse paid tax on them. This allowed divorcing couples to shift taxable income from the higher-income spouse to the spouse in a lower tax bracket. Shifting income from a high tax bracket to a lower tax bracket lowered the overall tax burden, leaving more money available for the two households combined.

However, the Tax Cuts and Jobs Act, a tax law enacted by Congress in 2017, permanently eliminated the tax deduction for alimony payments made for those divorcing in 2019 and later. Alimony recipients are no longer required to pay tax on their alimony payments or include them in income.

At the state level, tax treatment varies.  California, for example, still allows the payor to deduct spousal support payments for state income tax purposes, and the recipient to pay tax on the income, while others, such Oregon, follow the 2019 federal treatment. Non-deductibility makes spousal support tax-neutral, similar to the way child support is treated.

At first glance, this may seem like good news for the recipient.  After all, not having to pay tax is great, right? However, the practical effect is likely to be that in many cases the payor will owe more in tax but pay less support, and the recipient will not owe any tax but will receive less support.  Both parties will have less (after-tax) money to spend.

So, what strategies can divorcing couples use to recreate some of the old tax benefits of spousal support payments?

One option is to think strategically when dividing marital assets.  If you’re in a lower tax bracket than your ex-spouse, you can sell investments (like stocks, bonds and mutual funds) to generate income and pay much less in tax than they would.  Your ex could then use their income that they would have otherwise paid out to you in alimony to buy more investments.

A one-time transfer of marital assets instead of ongoing spousal support payments can also be attractive beyond the potential tax savings.  It can allow for a cleaner break, helping both of you move on more quickly.

You should also keep in mind that the law may change again.  So, it would make sense to add a provision for future tax law changes in your marital settlement agreement, with specifics about what can and cannot be modified.  There are elements in the 2017 law that are set to expire in 2025 that make keeping your marital home more expensive and taking your children as tax exemptions less attractive.  All the more reason to work with an experienced attorney.

Need guidance financially preparing for or navigating a divorce?  Contact our team at Springwater Wealth today to learn how we can help.

Child support is determined through a calculation that follows legal guidelines. The guidelines take into account many factors, including the incomes of the parents, other children the parents have to support, parenting-time schedules, and work-related day care costs for the children.

In addition to the amount given by the guidelines, one or both parents must cover the cost of the child’s health insurance, medical care, and childcare. Other factors like the child’s educational needs may also increase or decrease the amount of support.

A pension earned during marriage is generally considered to be a joint asset of both spouses. However, it’s up to the divorce courts in your state to decide whether and how pension assets are to be split, and whether survivor benefits are payable.  If you’re divorced, a court order is needed to receive a share of a pension.  This court order is called a “domestic relations order”.

In most cases, the payments you receive from a divided pension can be paid for the life of the employee/retiree, and also after death (whether it occurs before or after retirement).  Note, however, that some state and municipal pension plans won’t make direct payments to former spouses.

The rules for the division of pensions resulting from a divorce are complex, and they vary from state to state, and from pension plan to pension plan.  Your rights to a share of your ex-spouse’s pension may also depend on when your divorce occurred.

If you’re planning to get divorced, and your spouse has an employer-sponsored retirement plan account like a 401(k), 403(b), Thrift Savings Plan or profit sharing plan, you’ll be entitled to a share of the account balance, unless you have a prenuptial agreement that says otherwise.  Note though, that if you have a retirement plan account, your spouse is also legally entitled to a share of yours.

As with a pension plan, a retirement plan account will be divided using a Qualified Domestic Relations Order, or QDRO.  The QDRO provides you with a degree of protection that the marriage settlement agreement doesn’t.  It will allow funds in the retirement plan account to be split, and your share to be transferred to an account (typically an Individual Retirement Account, or IRA) in your name, without penalty.

While retirement plans often have standard forms that your attorney can use to draft the wording of the QDRO, you may want to consider hiring a lawyer who specializes in this area.

Your lawyer should carefully review the retirement plan’s Summary Plan Description and other plan documents, because the QDRO’s terms must align with the terms and conditions of the retirement plan. Defined contribution plans like 401(k) and 403(b) plans are different than defined benefit pension plans, another reason it may be helpful to hire an attorney who specializes in this area.

Amounts added to retirement plan accounts during your marriage are considered marital property, which means that both you and your spouse have a right to them.  However, if either of you already had funds in a retirement account before you married, those dollars are typically treated as separate property in a divorce – treatment will vary from state to state.

As you plan your financial life post-divorce, you’ll want to have a clear understanding of what your share of retirement assets will be.  These assets will determine some or all of your income in retirement.

You may also not be able to avoid tapping into the funds in these accounts before retirement, if you haven’t worked for some time.  You may plan on going back to work, receiving spousal support or child support after your divorce, but you may need to rely on retirement account assets for supplemental income until your financial situation stabilizes.  You should be aware that withdrawals from retirement plan accounts before age 59 ½ could be subject to a 10% early withdrawal penalty along with state and federal income tax.

From its creation during the administration of President Franklin Roosevelt, Social Security has given spouses and ex-spouses a claiming right to retirement benefits. As a divorced woman, it’s critical to understand the nuances of the Social Security system, and how you can maximize your benefit.

Depending on your circumstances, you can receive either:

So, as a divorced woman, your Social Security retirement benefit depends not only on your own earnings history, but also to a large extent on your marital history and the earnings histories of your previous spouse(s). Furthermore, a divorced person with multiple marriages could receive an auxiliary benefit from any of their former spouses.

The following flowchart can help you navigate the complexities of claiming Social Security as a divorced retiree. 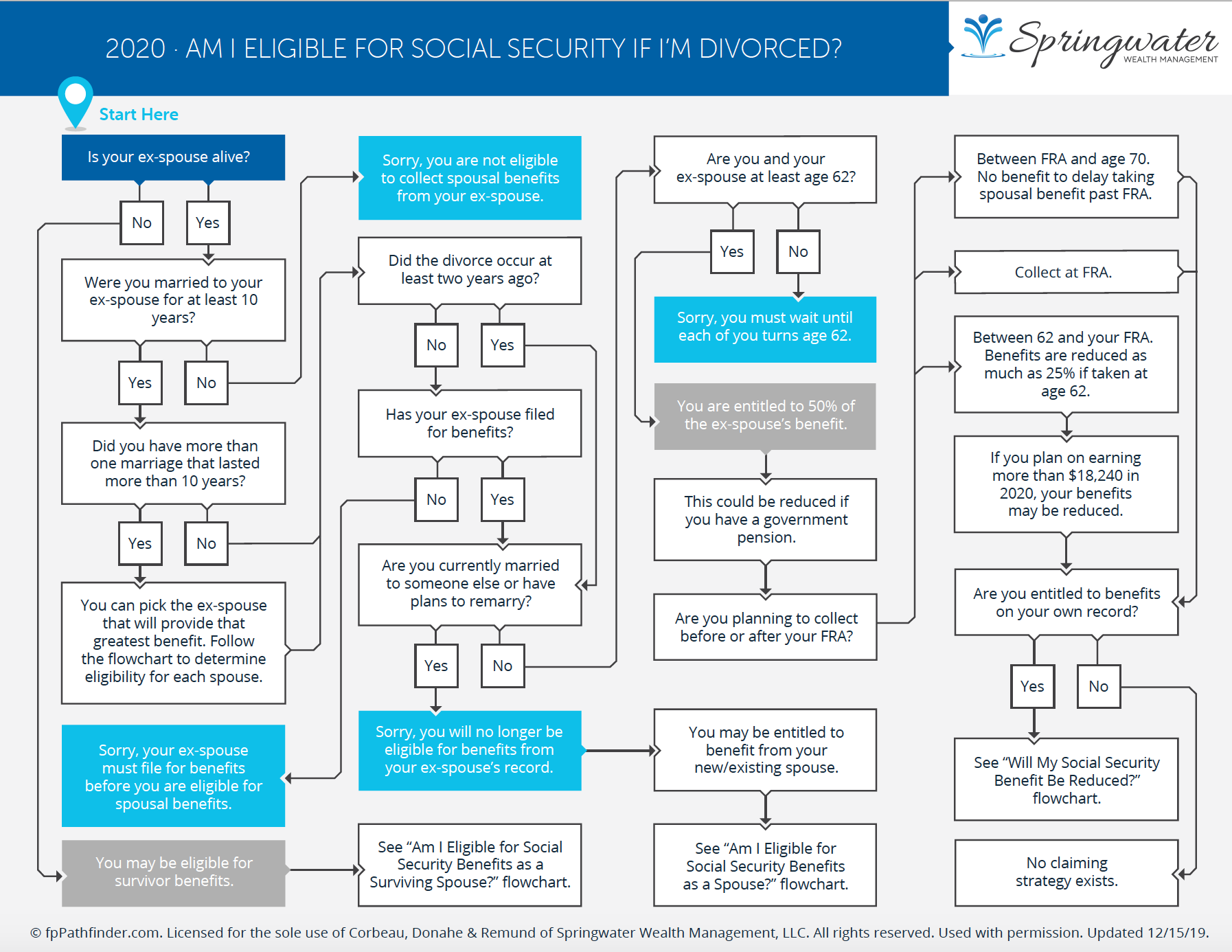 Before claiming Social Security, you should consider consulting a qualified tax advisor or financial planner.