Senate majority leader Mitch McConnell will be under pressure this week 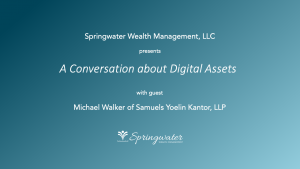 The informative conversation was recorded for later viewing, and you can find it on our website here or on our YouTube channel.

COVID-19 Numbers
The US just passed a grim milestone, with over 4 million known coronavirus cases. The CDC believes millions more are already infected. Over the past two weeks, case totals have risen in 37 states.

Globally, across 188 countries and territories, there have been over 16 million confirmed cases and nearly 650,000 deaths. In the US, over 4.2 million have been infected and over 147,000 have died. The CDC believes more than 10 million Americans are already infected.

This graph from Johns Hopkins continues to tell the story. 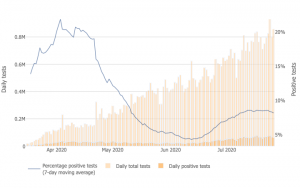 The Economy
A looming crisis is the expiration of enhanced unemployment benefits.

Typically, state unemployment pays about 45% of a worker’s prior wages. In March, Congress approved a $600/week emergency bonus in addition to the traditional payment, providing hundreds of billions of dollars to newly jobless Americans as the pandemic hit the country and forced the shuttering of the economy.

This additional benefit, currently provided to about 20 million Americans, is due to expire at the end of the week – at the same time that a federal moratorium on evictions is ending.

Over the past few days, senior Congressional Republicans and members of the Administration have been discussing replacing the across-the-board $600 weekly bonus with one tied to workers’ income before their job was lost, and amounting to about half the state unemployment benefit.

And even as some states still struggle to cope with enormous backlogs of unemployment claims due to antiquated computer systems and other technology hurdles, there were another 1.4 million claims for the week ending July 17. Treasury Secretary Steve Mnuchin was forced to acknowledge last week that there will likely be more challenges if states are required to pay unemployment bonus benefits tied to prior income, rather than a flat amount.

This morning, Senate Republicans are expected to unveil a $1 trillion spending plan, which will include a second round of $1,200 checks to millions of Americans, billions of dollars for schools, additional funds for the Paycheck Protection Program, a liability shield for businesses and health care providers, and the aforementioned extension of unemployment benefits at a reduced level.

This sets up a battle with congressional Democrats, who are in favor of far more spending to support the economy and American households, and who are rallying behind a $3 trillion spending package passed by the House of Representatives in May.

The Public Health
Last week, eighteen US states set single-day case records. But in a hopeful trend, the number of new cases nationwide has leveled off, after having risen for the previous month. The current rate of about 66,000 new cases per day remains far higher than in virtually any other large, high-income country.

But the stabilization may mean that we’re starting to take measures to slow the virus’s spread, including wearing masks and avoiding indoor activities.

Unfortunately, our testing remains woefully inadequate for the situation. There are reports of results taking days, and often weeks, to be returned, making contract tracing essentially impossible, and making it difficult to detect new outbreaks.

Several of the country’s largest states by population – Texas, Florida, and California – are experiencing record new case levels, and in areas in Florida and Texas hospital intensive care units (“ICUs”) are overwhelmed.

Treatment
Governments and drug companies around the world are racing to develop a vaccine for this novel coronavirus.

The UK announced last week that it had agreed to buy 60 million doses of a product from Valneva of France and 30 million doses over the next two years of a candidate vaccine developed by Germany’s BioNTech and Pfizer. Shortly after that, the US agreed to spend $1.95 billion on 100 million doses of the same vaccine to distribute free of charge to American citizens. The agreement also includes the option to purchase an additional 500 million doses, subject to receiving regulatory approval.

There are many unknowns surrounding these agreements, including manufacturing costs, yields of end products and dosage sizes of vaccine needed. Some companies such as Johnson & Johnson have said they will manufacture on a not-for-profit basis, while others, such as Pfizer, haven’t committed to doing so.

This morning, Moderna announced the official launch of a series of extensive clinical trials that will test the effectiveness and safety of experimental vaccines in 30,000 participants, with half receiving the shot and half receiving a placebo.

Moderna expects to have enough evidence to ask regulators to determine whether the vaccine is effective by this fall or late this year. The company is planning to produce 500 million doses of the vaccine per year, with the possibility of making 1 billion doses in 2021. Over the weekend, the federal government committed $472 million to support the large trial, doubling the federal investment in Moderna’s vaccine candidate.

The Way Forward
With the coronavirus showing no signs of magically disappearing, and with the federal government leaving it to individual states to plot a course of action, businesses and educational institutions across the country are defining for themselves a “new normal”.

In an unprecedented move, the entire Arizona State University swimming program – men and women – has decided to “red shirt” for the coming 2020-21 season. [To “redshirt” in NCAA terminology essentially means to sit out a season and extend a college career by a year. With some exceptions, student-athletes in Division I are allowed to use this rule once in their collegiate career. NCAA student-athletes get four seasons of eligibility in any one sport, and redshirt seasons don’t count against that eligibility.]

School districts across the country are racing to prepare various models of instruction for the fall start, including cohort-based in-person classes, hybrid online and in-person combinations, and fully virtual programs. Outside Portland, Oregon the Beaverton School District has launched a new K-12 online school called “FLEX”, for example.

Cities are accelerating applications and waiving fees for restaurants interested in offering outdoor dining. Many localities are going as far as opening sidewalks and closing streets, to create large “al fresco” dining rooms.

As has been the case since the virus was first identified in this country early this year, we can severely limit its impact by practicing good hygiene, avoiding crowds, avoiding close contact with those outside our household, wearing a mask, and cleaning and sanitizing surfaces when needed.