Martin Luther King, Jr. waves to the crowd at the March on Washington in 1963

As we celebrate the holiday named after civil rights pioneer Martin Luther King, Jr., we will focus on the economy and the financial markets. However, we must acknowledge that, in the aftermath of the shocking behavior at the US Capitol on January 6 and for the first time in American history, a President has been impeached twice. This Wednesday, January 20, Joe Biden will be sworn in as the next President of the United States. We hope it will be a peaceful day in Washington, DC and across the nation.

The story we present today is, as it has been for many months, about the novel coronavirus. We offer data on COVID-19 below. This virus continues to disrupt life around the globe. Infections are surging throughout the world, and while extremely effective vaccines have been developed and are in production, the distribution of these life-saving shots has fallen far below expectations.

As the mutations of the virus spread, health and government officials around the world have been forced to invoke drastic measures to slow it. These defensive measures have resulted in continued limitations on, or closures of, major industries, including travel, restaurants and bars, and entertainment. The economy will continue operate in a fractured manner until the virus is contained and it’s safe to fully reopen.

The yield on the 10-year Treasury Note was 1.087%. Yields have moved up markedly over the past few weeks, which indicates investor nervousness.

Globally, across 213 countries and territories, there have been nearly 95 million confirmed cases and over 2 million deaths. In the United States, nearly 24 million have been infected and nearly 400,000 have died.

The variation of COVID-19 first identified in the UK and now known as B.1.1.7 has arrived in the US and is spreading. This concerns health authorities, because this mutation is much more transmissible than the original strain. Epidemiologists expect that as many as 80% of Americans will need to be vaccinated before the virus can be contained through herd immunity.

The good news is that infectious disease experts still believe this mutation is no more dangerous than the first strain. The vaccines currently in distribution are expected to be equally effective against the new variation.

The number of new cases of COVID-19 per day has remained above 200,000 for nearly two weeks. 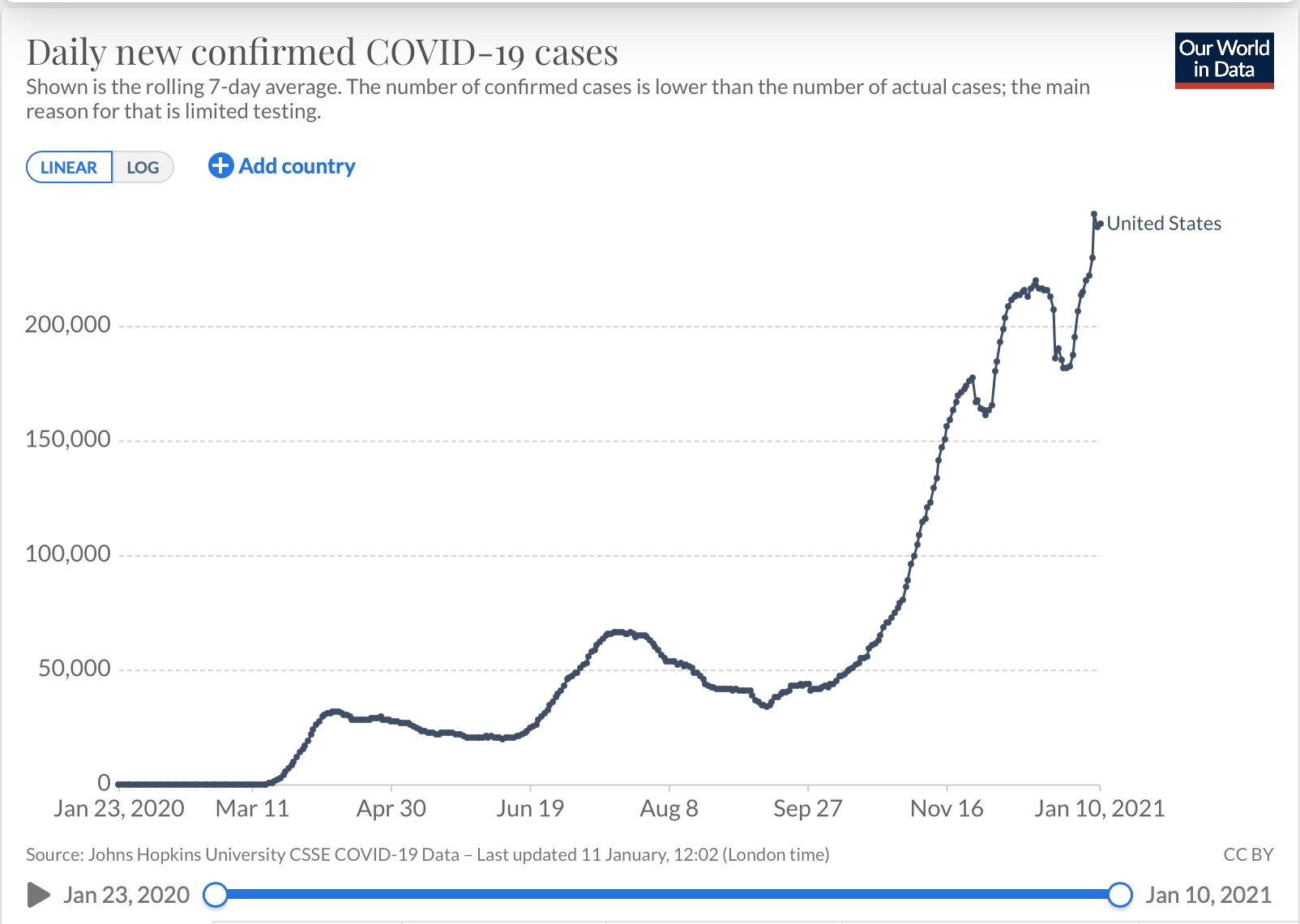 The positive test rate has fallen in recent weeks, but remains much higher than it was in the spring and summer. 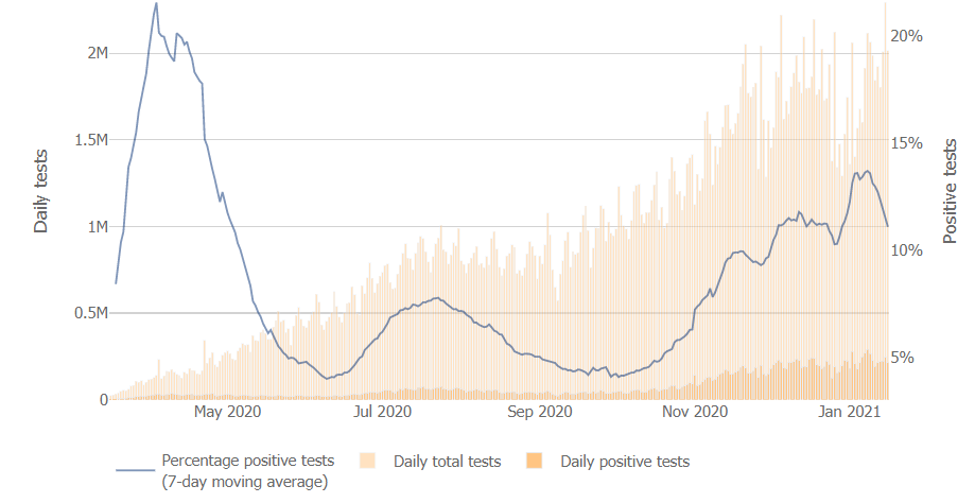 The virus continues to threaten to overwhelm our health care system. There are now over 120,000 people hospitalized with the virus. 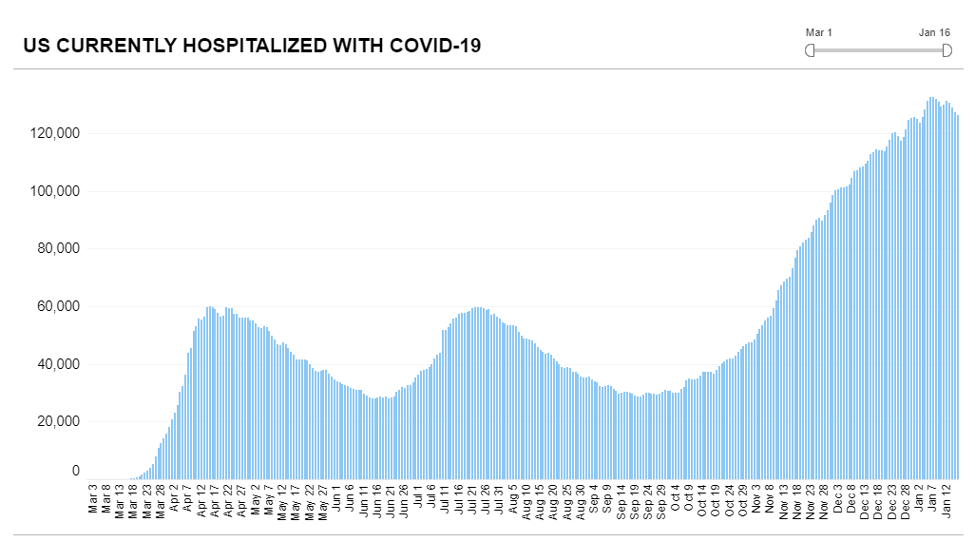 We continue to lose staggering numbers of our fellow citizens to the virus. There were 4,406 deaths on January 12 alone. The image below shows the daily death count. 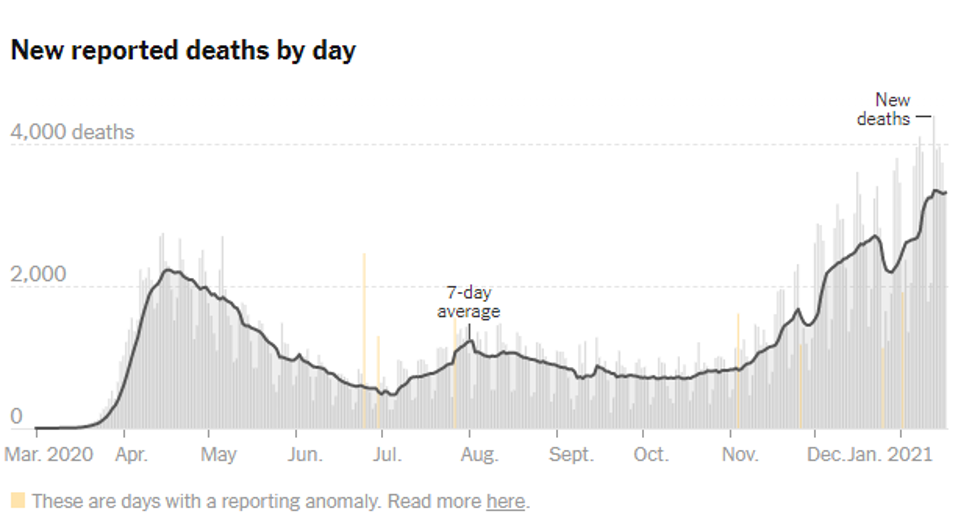 The Institute for Health Metrics and Evaluation (IHME) at the University of Washington projects that a total of between 535,000 and 621,000 Americans will die from the virus by May 1, 2021. The variance is driven by mask usage, vaccinations, and other containment strategies.

If you want to see a summary of this data since October 1:

The US has not administered the two approved vaccinations (from Pfizer/BioNtech and Moderna) in an organized, efficient, and effective manner. There are several reasons for this.

The federal government has not provided state and local health authorities with clear and consistent information about the priorities that should be followed as the vaccines are administered. It has also offered inconsistent guidance about the availability of the vaccine for the second dose which is required for both approved vaccines.

The actual number of doses sent to states have not met the expectations set by the government last year. The outgoing administration indicated that it would provide 100 million doses of the vaccine and that 20 million would be administered under Operation Warp Speed by the end of 2020. That did not happen. The federal government has distributed more than 30 million doses and, as of last Thursday, 11 million have been given shots according to the CDC.

Some federal officials have suggested that Pfizer and Moderna have not provided the numbers of vaccines promised to the government. There is no evidence to support this assertion. In fact, other federal authorities have commended both companies for their efforts to manufacture and supply the vaccine.

At the state and local level, hospitals, health care providers and state agencies are disorganized and are not vaccinating people in a systematic and rapid manner. Many health administrators do not have the necessary tracking systems in plan to effectively administer the vaccine. They also lack the resources to implement wide-scale distribution of the vaccine.

It’s clear that changes need to happen, and immediately. Further delays will result in additional death and suffering. The federal government needs to manage vaccine distribution as if the nation were at war. The truth is that we are at war with a deadly virus.

President-elect Biden has called for 100 million vaccinations in the first 100 days of his administration. He has also called for Congress to provide billions of support to states, so that they can distribute vaccines properly. He is also proposing federally-run vaccination sites, mobile vaccination units in rural and underserved areas and a national awareness campaign. These efforts cannot come fast enough. 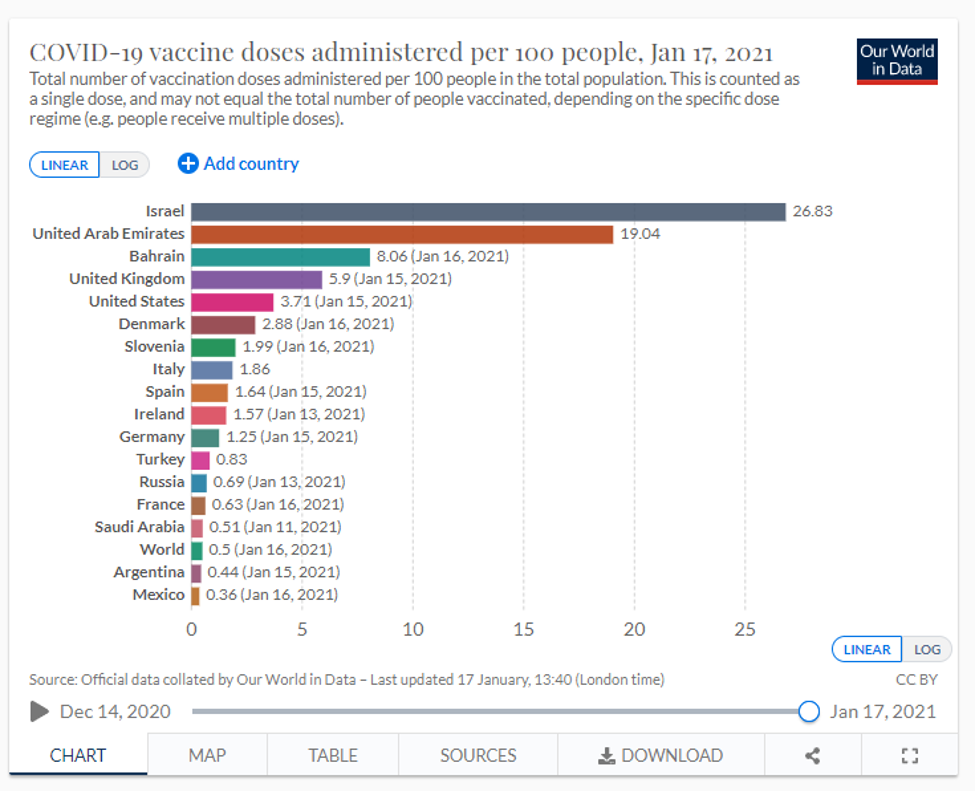 Reports coming out of the Labor Department indicate that the economy remains hampered by the unconstrained virus.

The number of Americans applying for unemployment benefits jumped dramatically by 181,000 to 965,000 the week ending January 9. This is the largest increase in claims since the beginning of the pandemic. Economists believe that this large increase could be related to states processing a backlog of claims and the attraction of the recently passed enhanced unemployment benefits (i.e. $300/week supplemental benefit).

There were an additional 284,000 claims under the Pandemic Unemployment Assistance program, which provides benefits for self-employed and gig workers.

Moreover, 140,000 Americans lost their jobs in December, breaking a seven-month long stretch of job creation. The nation is down 10 million jobs compared to a year ago. The national unemployment rate is officially 7.9%.

For a third straight month, retail sales fell in the US. They were down a seasonally adjusted 0.7% from the prior month. Consumers are spending less because they are discouraged by the virus. Consumer spending makes up about two-thirds of the nation’s economic activity. So, a drop in retail sales doesn’t bode well for an economy mired in recession.

The federal government’s budget deficit for the first three months of the fiscal year (which starts October 1) was $573 billion, a record and nearly 61% higher than the same period in 2019. The federal government ran a deficit of $3.3 trillion during the calendar months of 2020, equivalent to 15.8% of the nation’s gross domestic product.

The nation’s debt increased by almost $7.8 trillion during the Trump administration. It is currently just under $27 trillion and it will surely rise over the next several years.

While there are economists who believe the US should not be overly concerned about the debt, history tells us that at some point our debt will raise concern among global investors. When that happens, the US will face new and potentially grave economic challenges.

While Biden will enjoy a Democrat-controlled House and Senate, it’s not clear that he will be able to get his proposal through both institutions without making concessions to Republicans.

Congress has already passed more than $4 trillion in various forms of virus-related support. Republicans appear to have little appetite for additional spending.

It’s all about the virus and the vaccines. We need to get the highly effective vaccines distributed quickly and we need the vast majority of Americans to take it. Only when most of us are vaccinated can life return to normal.