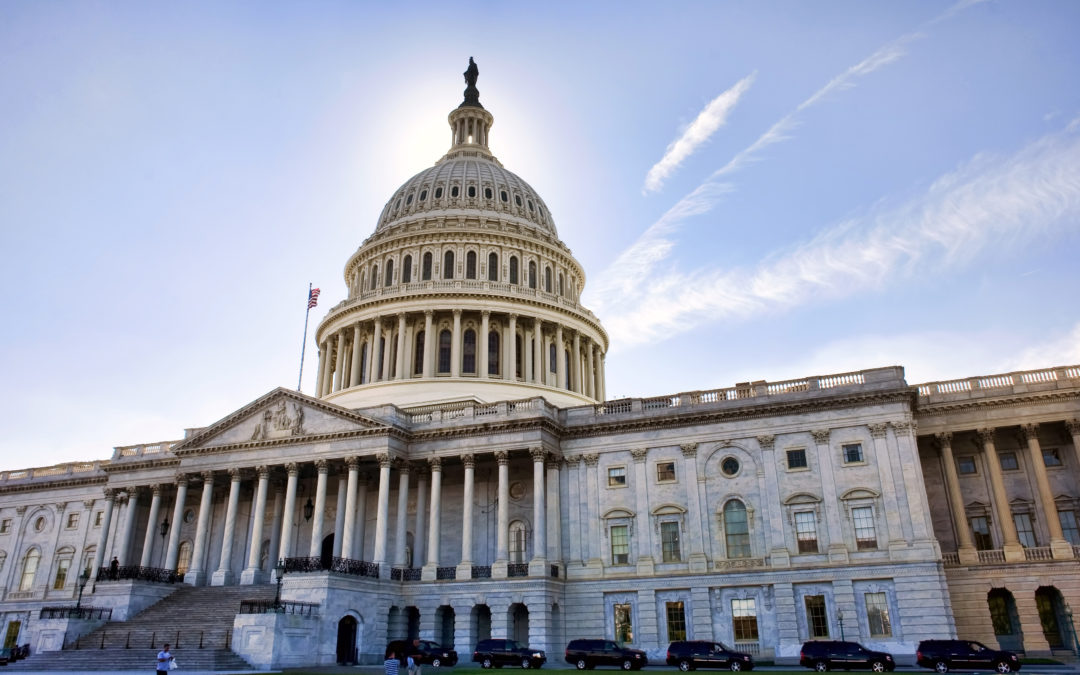 The coming week is likely to be dominated by two high-profile events: the second impeachment trial of former President Trump, and the negotiations in Congress over the Biden Administration’s proposed $1.9 trillion stimulus package. Needless to say, legislators will have their hands full.

The Biden Administration is providing daily substantive briefings to the media on its efforts to combat the virus.

As of last week, The Institute for Health Metrics and Evaluation (IHME), an independent global health research center at the University of Washington, is projecting that fatalities in the US will rise to between 586,000 and nearly 703,000 by June 1. The variance is based on the rate of adoption of various mitigation strategies like universal mask wearing, and the spread rate of more transmissible variants. 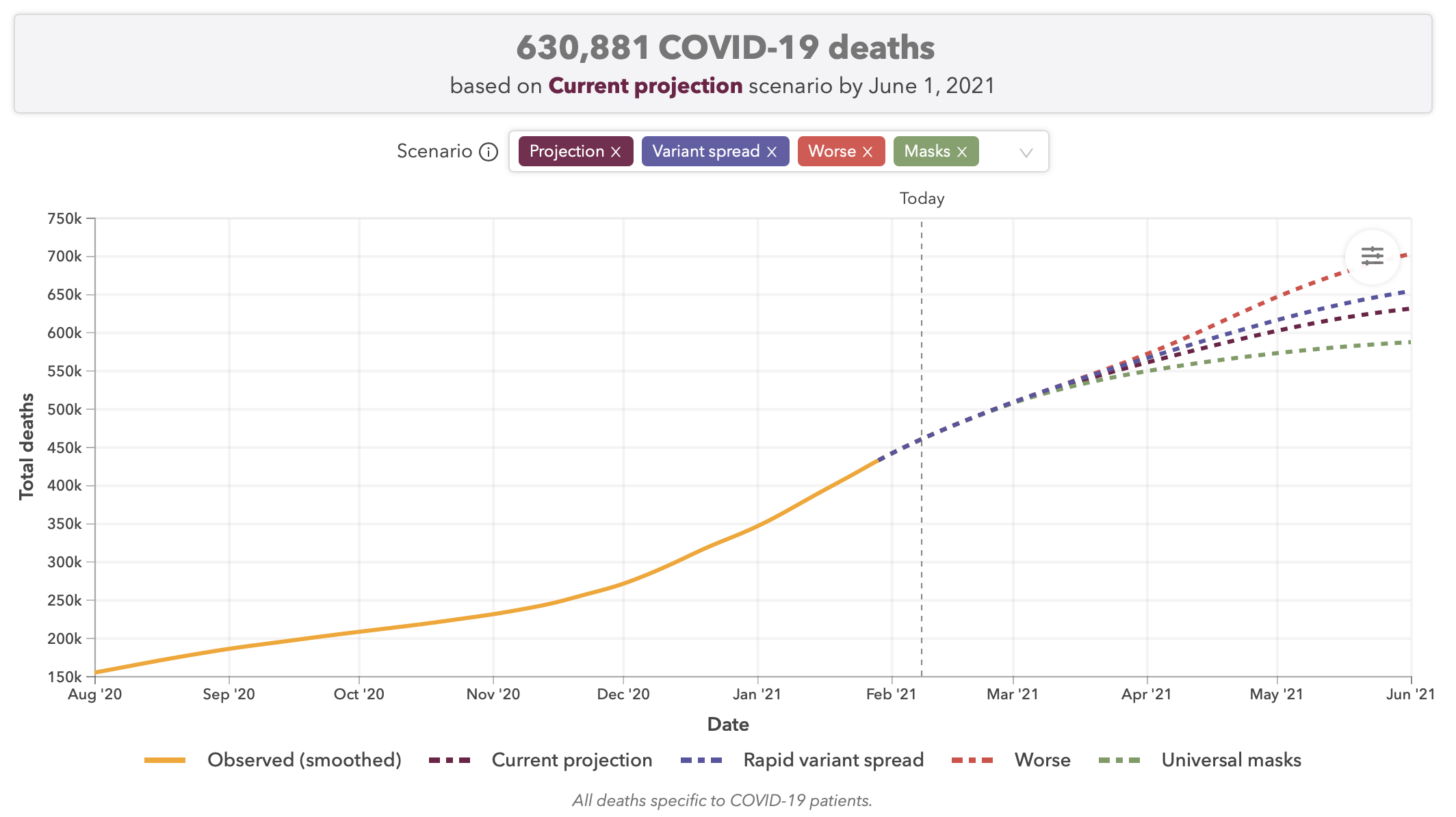 The testing rate has dramatically improved over the past few weeks; we are now consistently testing more than 1.5 million people a day. While this is still inadequate, it is a positive trend. In addition, the positivity rate is dropping again, and is now down to almost 5%. While this still too high, it is trending in the correct direction. 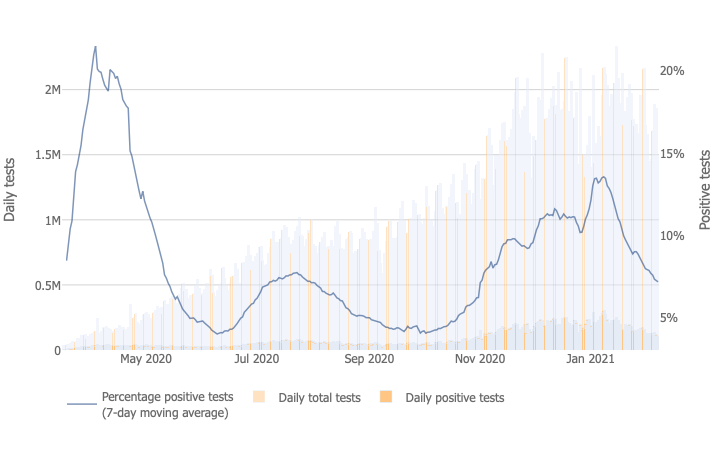 The number of Americans hospitalized with COVID is now down to about 80,000. This after many weeks where the number was in excess of 100,000. 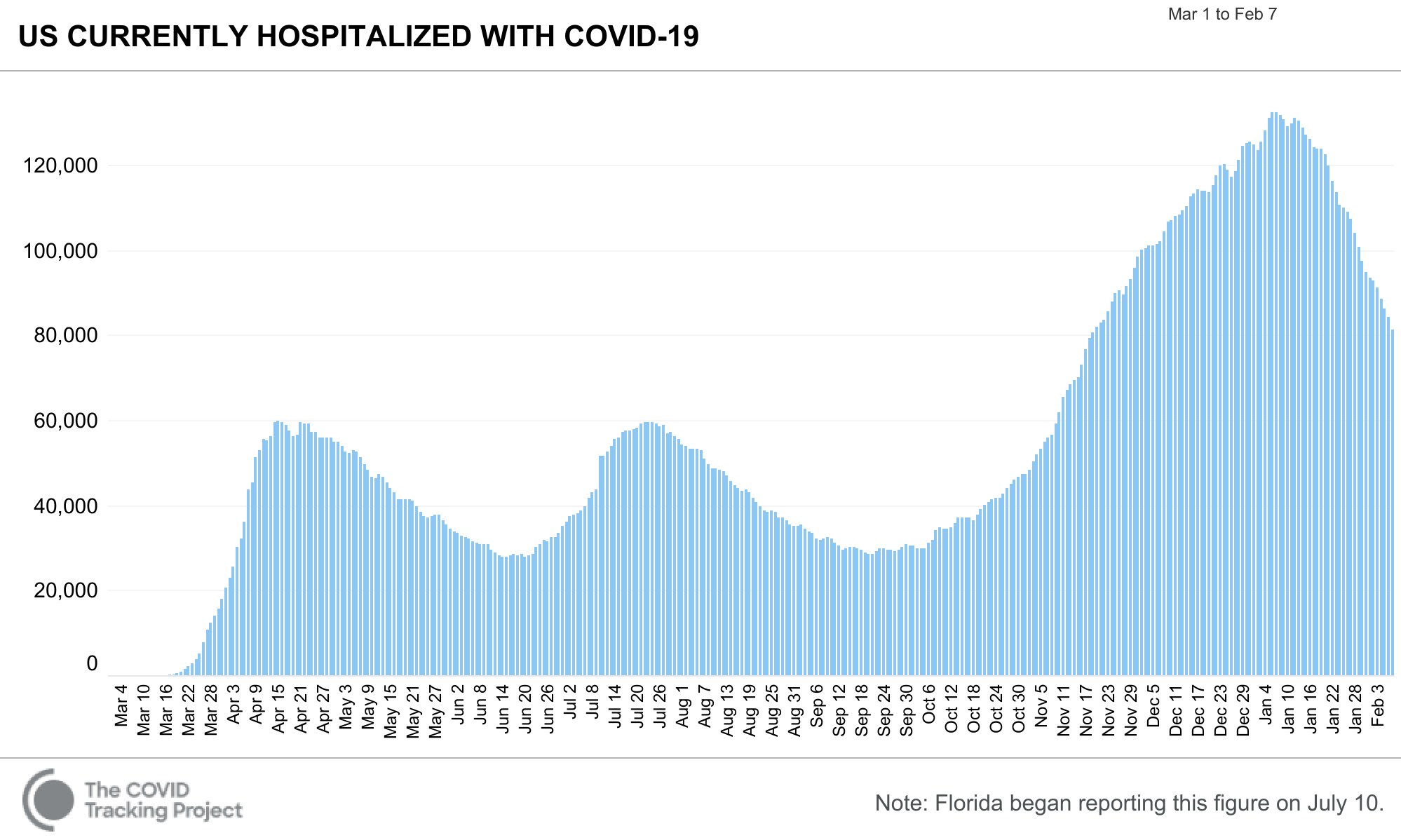 This morning, the CDC announced that deaths from COVID were up over 2% this week compared to the prior 7-day period, though some of this can be attributed to reporting delays.

Vaccination remains the key to successfully defeating the virus and ending the pandemic.

In some states, people who have received their first dose of a two-dose vaccine are struggling to figure out how to obtain their second shot. The problems appear to be centered around scheduling systems.

However, Public health officials sounded a somewhat optimistic tone on Sunday, regarding the availability of vaccines and doses. Dr. Fauci acknowledged that demand currently dramatically exceeds supply right now, but he expects the situation to improve in the coming months.

The increased supply should come from the two already approved vaccines from Moderna and Pfizer, as well as from Johnson & Johnson – which has already applied for Emergency Use Authorization – and Novavax, which is expected to apply for EUA shortly.

The chart below shows the relative success – or failure – of a select group of developed nations in getting “short in arms”. 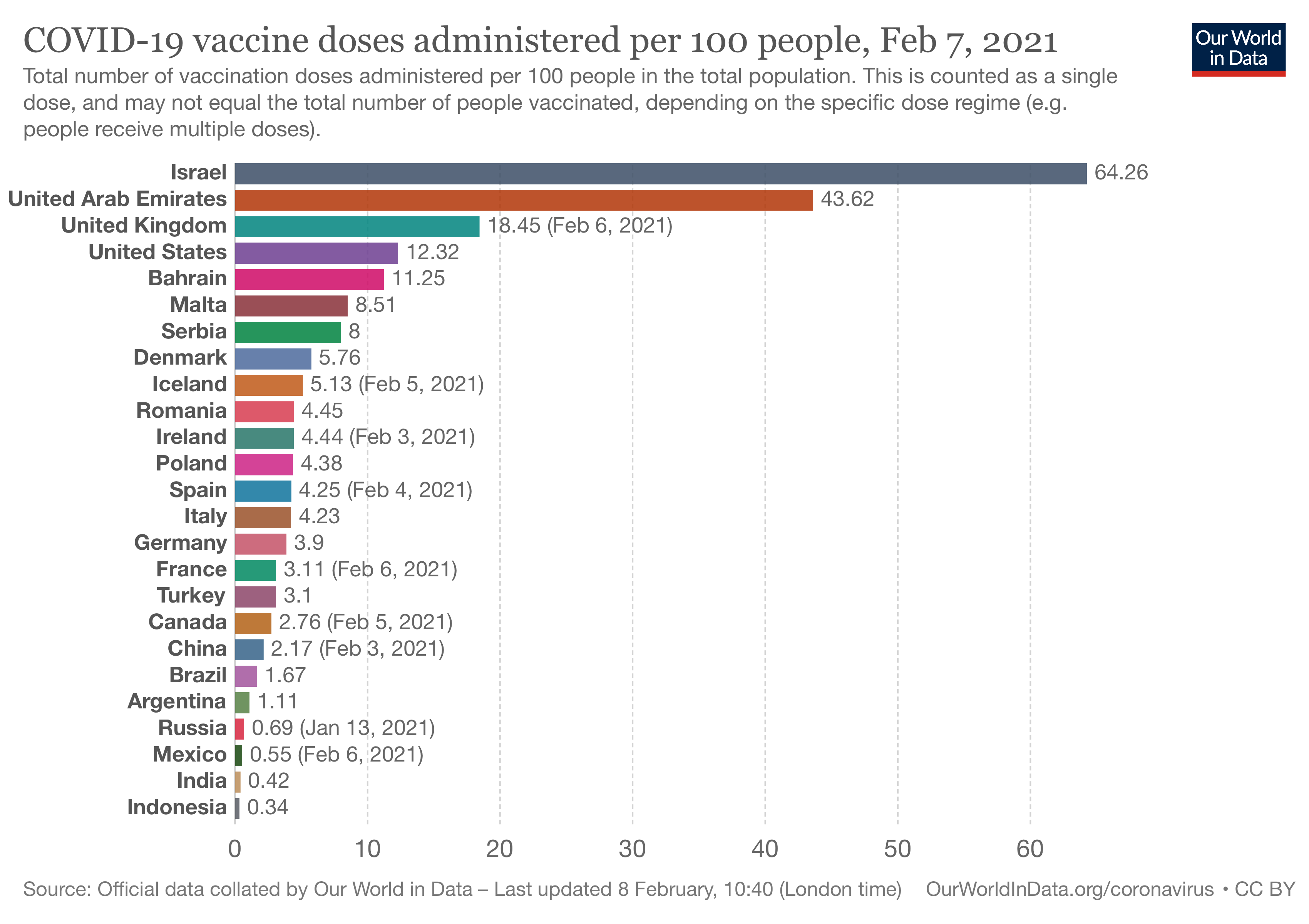 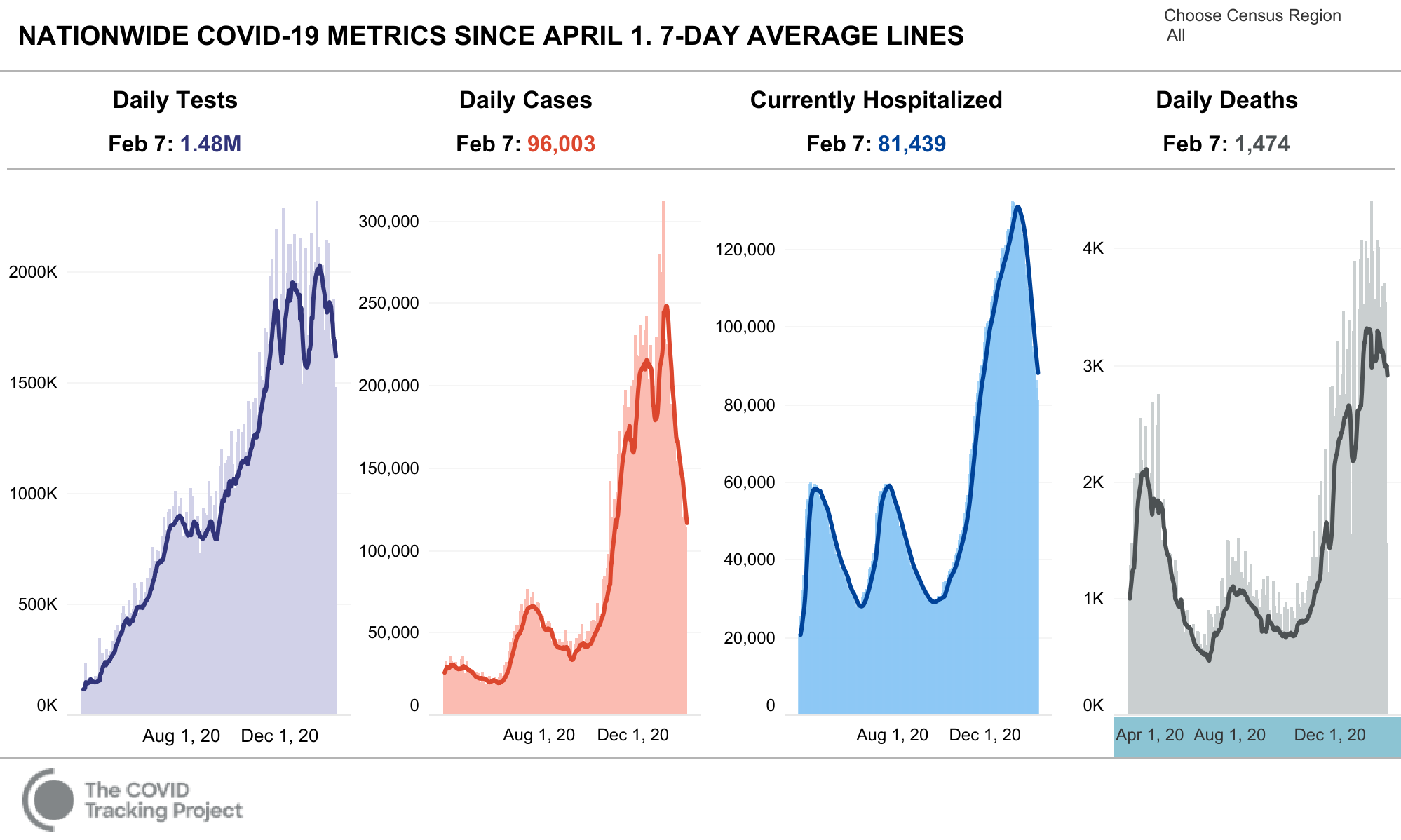 On the Sunday morning talk shows, Treasury Secretary Yellen pushed for rapid approval of the Administration’s proposed $1.9 trillion plan and said the US could return to full employment in 2022 if Congress acts fast. House Speaker Nancy Pelosi said on Friday the House aims to pass the bill within two weeks.
However, differences have emerged between Democrats in the House and the Senate over the criteria for the next series of stimulus payments. The plan includes payments of $1,400 per person, fulfilling President Biden’s pledge to supplement the $600 payments from December to $2,000 in total. There is disagreement over eligibility, and which income thresholds should apply. The White House appears willing to compromise on the issue, and Secretary Yellen reinforced this message over the weekend.

There is also some disagreement over other aspects of the bill, including the proposed $15 per hour minimum wage, the scale of unemployment assistance, and the overall size of the stimulus package.

Economists and investors are increasingly optimistic about the prospects of the economic recovery. Australian investment bank Macquarie is projecting that the US economy will grow by 7% in 2021. This would be the strongest growth rate since 1983.

This morning, all US market indices are at record highs. As we noted last week, US stocks remain relatively expensive from an historical perspective. International developed and emerging market equities, though, seem to present a better value.

The yield on the 30-year US government bond rose to as high as 2% this morning, its highest level since February 2020, driven by prospects of higher inflation and a quicker economic revival on the back of the Administration’s $1.9 trillion stimulus plan.

The yield curve, which is a graphical reflection of the difference between short- and long-term interest rates, has been steepening over the past few weeks. This is a classic indication that the bond market is anticipating stronger economic growth and higher inflation.

The number of Americans filing for unemployment benefits declined to 779,000 for the week ended January 30th, from the previous week’s revised figure of 812,000 and well below market expectations of 830,000. It was the third straight week of a fall in claims, and the lowest number since the last week of November. In addition, about 349,000 people applied for help from the Pandemic Unemployment Assistance scheme, which covers workers that do not qualify for initial claims.

It seems as though the news around the coronavirus pandemic is improving steadily, though quick and efficient vaccination of the majority of Americans remains the key to putting this all “behind us” and returning to a semblance of normality. And the apparent ability of the virus to mutate quickly is an additional complication. Fortunately, scientists seem confident that they can adapt their vaccines to these new strains.