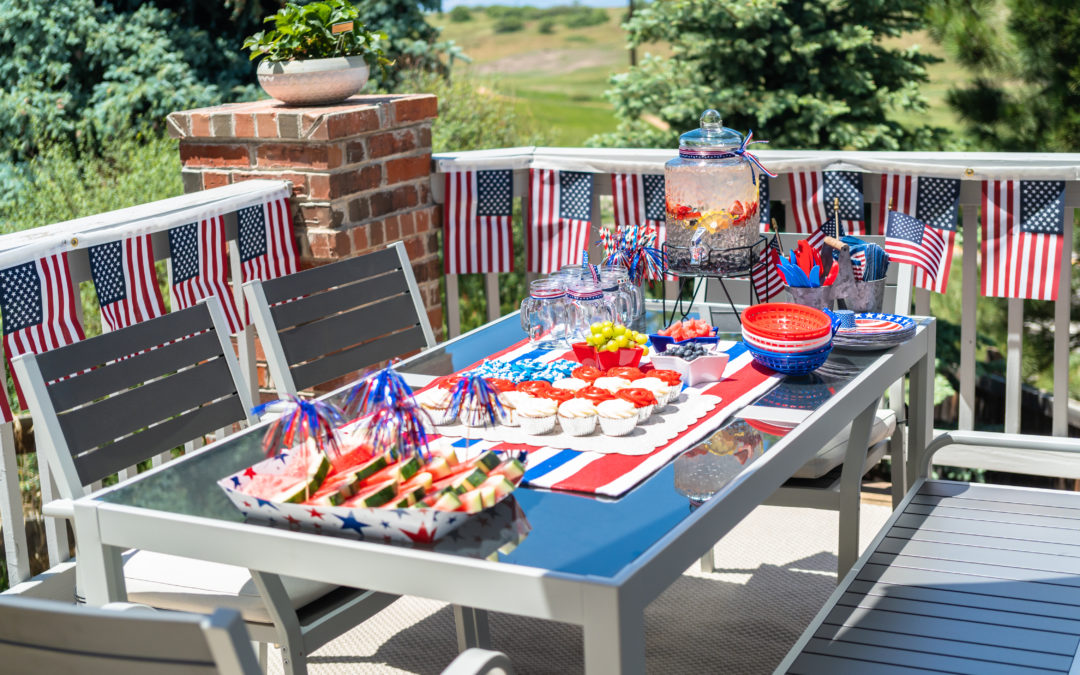 Americans celebrated a post-pandemic holiday over the weekend

We hope you’re enjoying the long Independence Day weekend. Last week the markets closed out the month of June, the second quarter, and the first half of 2021. Investors were rewarded with stellar returns. More below.

The nation’s vaccination campaign, while not uniform, has generally been successful. The nation didn’t reach President Biden’s vaccination goal of 70% by July 4th and the rate of vaccination varies significantly across the country. But overall, the nation’s made great progress in getting its citizens vaccinated. As a result, we ‘ve returned to something resembling what “normal” was. Schools opened. Business activity increased. Travel picked up. Large gatherings resumed.

The US economy, fueled by massive fiscal spending by the federal government and unprecedented monetary support from the Federal Reserve, has quickly recovered from the devastation caused by the shutdown that occurred in the spring of 2020.

West Texas Intermediate Crude futures for August 2021 delivery traded at $75.19 a barrel on Friday, down 0.04%. The demand for oil continues to grow as the world emerges from the pandemic. Look for OPEC+ nations to increase supply in the next few months.

Friday the yield on the 10-year Treasury note was 1.437%. The decline in the 10-year note suggests that investors may be less enthused about the economy’s longer-term prospects for growth. Yields fall when bond prices rise. So, investors are moving back toward Treasuries and away from other riskier investments. Time will tell whether this barometer proves to be foretelling.

Globally, across 213 countries and territories, there have been over 183 million confirmed cases and nearly 4 million deaths. In the United States, over 33 million have been infected and over 605,000 have died.

The virus remains a major threat in many nations around the world and particularly in India and on the African continent.

The number of new cases continues downward. The seven-day average is slightly above 13,000. 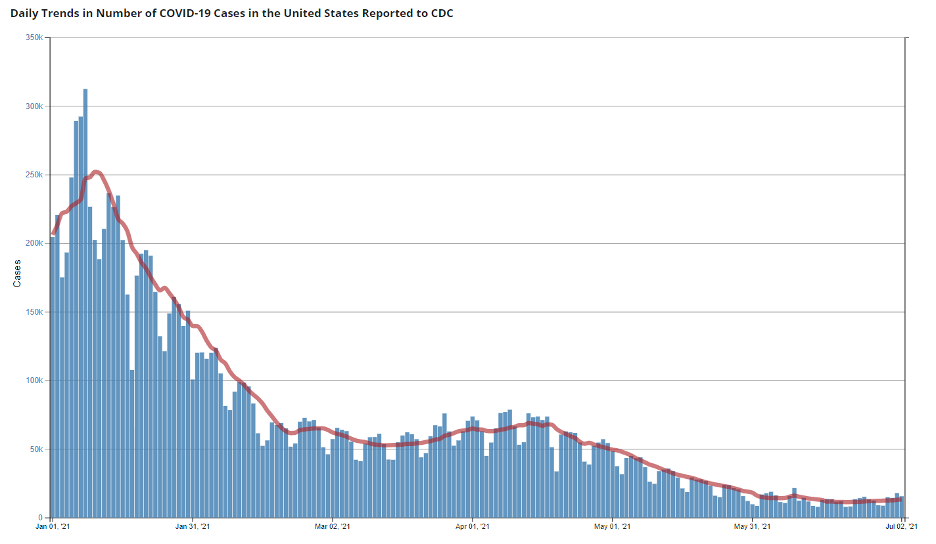 The Delta variant is now the dominant strain of the COVID-19 virus circulating in many countries, including the United States. The Delta strain is more infectious.

Fortunately, those who are fully vaccinated appear to be protected against the Delta strain.

We have lost over 605,000 American lives to COVID-19 and the virus continues to be a very real threat to those who are unvaccinated.

However, since the beginning of the year, the number of deaths per day has dropped significantly as depicted below. 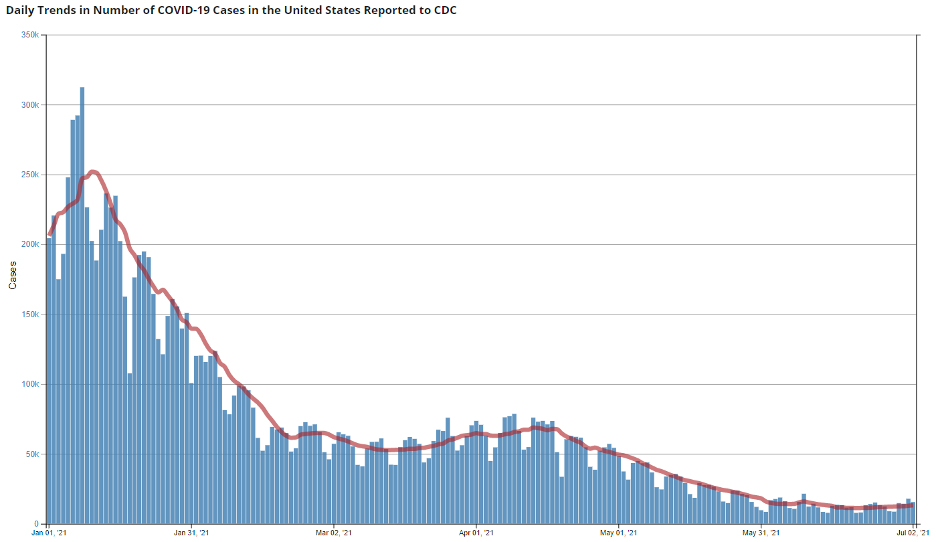 The CDC reports that 155 million people or 46.7% of the total US population are fully vaccinated.

States are now focused on reaching a 70%+ vaccination level. However, the vaccination rate across the country varies widely. Washington, Oregon and California have made more progress than the nation overall.

This chart shows the cumulative number of vaccinations across the country. 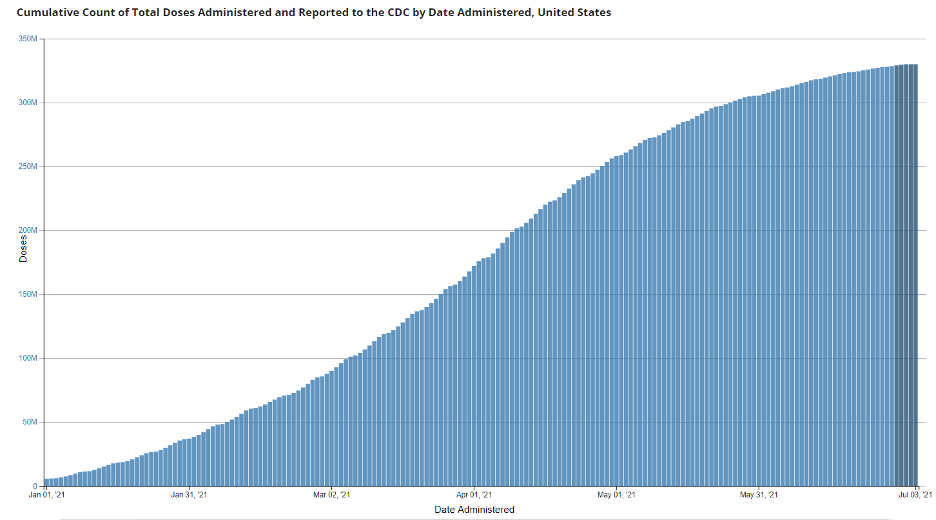 The Labor Department reported that weekly unemployment claims fell by 51,000 to 364,000 last week. The recovery has been bumpy as depicted below. The number of weekly claims is still well above the level before the pandemic (220,000). 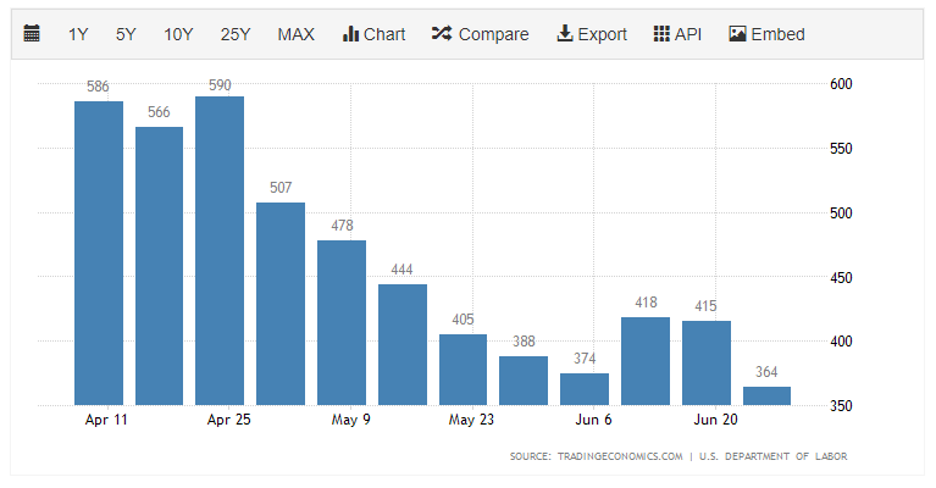 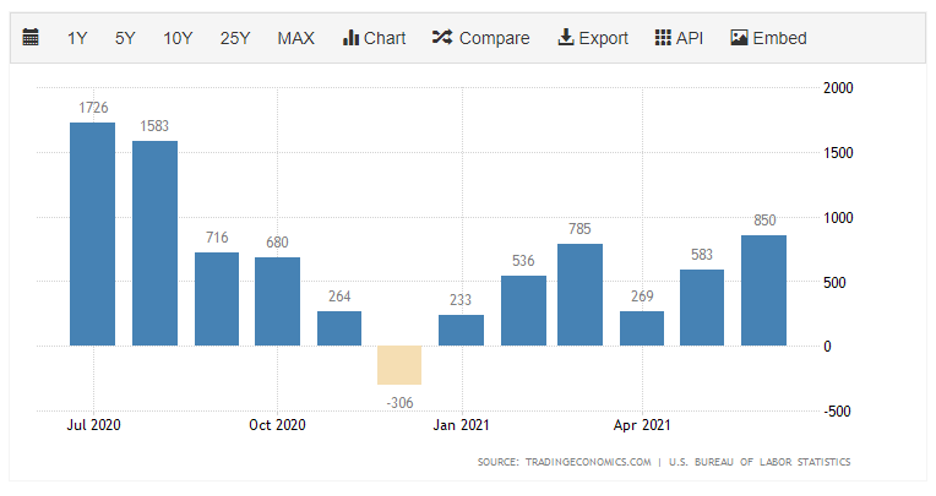 The unemployment rate is 5.9%, up from 5.8% in May and still well above the 3.5% rate before the start of pandemic. This suggests that workers who had been on the sidelines are reentering the work force. There are still nearly 7 million fewer jobs than there were before the pandemic began. Interestingly, there are 9.3 million job openings according to the Labor Department.

Economists call this divergence slack and there are various explanations for it. Some people are staying on supplemental unemployment benefits for as long as they can. Most of these programs will end in the fall. Some remain out of the workforce, because they lack childcare options. A surprising number of Americans retired and left the workforce permanently. There are large number of workers who remain concerned about their safety at their job sites. Others have decided to temporarily stop working to return to school, take an extended leave from work, travel, train for new work, etc. Immigration has also slowed and that has resulted in more job openings.

3.47 million were receiving traditional state unemployment benefits in the week of June 19.

14.7 million were receiving some kind of state or federal unemployment benefits in the week of June 12. The number was 32.1 million a year ago.

A bipartisan deal to spend almost $1 trillion on the nation’s infrastructure appears to be on track after some political maneuvering.

President Biden is proposing to invest in roads, bridges, water systems, broadband internet, the power grid, and charging stations for electric vehicles. He described the package as “a generational investment to modernize our infrastructure and create millions of good-paying jobs.”

Democrats are also working on a $1 trillion+ antipoverty program which will include education, child care, and affordable housing. They plan to move this package through the Senate through reconciliation which would require a simple majority vote instead of the 60 votes typically required to pass legislation.

According to the S&P CoreLogic Case-Shiller 20-city home price index, U.S. home prices increased 14.9% in April from a year earlier. This is the fastest rate of appreciation since the index began in 1987. Home price are being driven upward by low interest rates, a shortage of housing, people moving out into larger homes, new household formation and purchases of vacation homes.

The National Association of Realtors reported that the sales price in May for the median existing home rose almost 24% from a year earlier, reaching $350,000, a record. 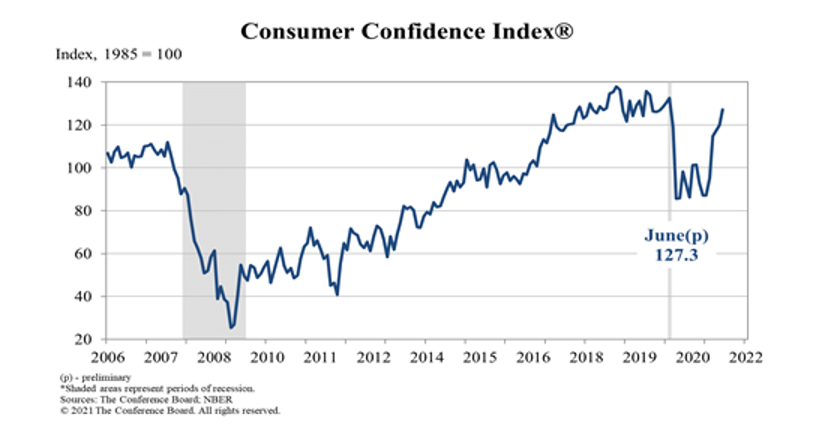 Consumers are feeling better due to increasing vaccinations, the resumption of business activity, and stronger personal balance sheets. Consumer spending comprises two thirds of US economic activity. So, we can expect increased consumer spending to fuel economic growth.

Wishing you health, happiness and prosperity.