During the 1800s, the Industrial Revolution was at its peak, and many Americans worked 12-hour days, seven days a week, in harsh conditions for low pay. Even young children worked in factories. Virtually no employers provided their workers with sick days, paid vacation days or health benefits.

As workers organized into labor unions, they began protesting poor and unsafe working conditions and lobbying for more benefits from employers. The move to recognize workers with a holiday began in state governments, which, one by one, passed legislation to honor the common worker. Congress created the federal holiday on June 28, 1894, designating the first Monday in September as Labor Day. 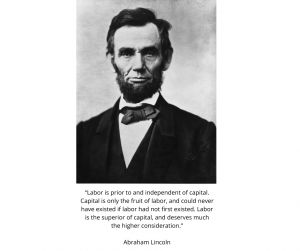 Of some concern is the fact that the market rally since the first quarter drop has been relatively “narrow”. A narrow market means that a only handful of stocks are driving performance. According to market analysts at investment bank Goldman Sachs, Google, Amazon, Apple, Facebook and Microsoft have together returns about 35% for the year to date. The remaining 495 members of the S&P 500 Index are down 5%.

The chart below highlights the extraordinary short-term performance of another “tech” stock – Tesla. Tesla’s stock price was on average relatively flat for nearly five years from 2014 to 2019 (albeit with considerable volatility along the way). Since September 2019, Tesla shares are up nearly 1,000%. 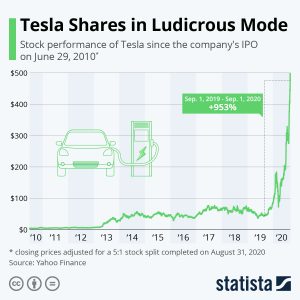 Analysts are attributing the meteoric performance to a share split that reduced the stock price and made it more accessible to retail investors, and quarterly profits that exceeded expectations and which qualified it for inclusion in the S&P 500 index.

In any event, with a market capitalization of over $440 billion, Tesla is today worth more than many of the world’s leading car companies combined. Tesla’s valuation works out to 17 times its revenue for the trailing twelve months. To put that in perspective, Toyota is currently valued at around 0.6 times its annual revenue. And while Tesla sold fewer than 400,000 cars in the 12 months ended March 31, Toyota sold nearly 10.5 million vehicles during the same period, about ten times as many as Tesla has built in its history.

The Economy – A Slowing Rebound
On Friday, the US Labor Department reported that the economy regained 1.4 million jobs in August, and thatthe unemployment rate recorded an unexpectedly large drop to 8.4%. Both figures suggest that the economic recovery continues, even if the rate of recovery has slowed since the early summer.

According to the Bureau of Labor Statistics, the unemployment rate would be closer to 9% if households gave an accurate description of their employment status. Some people mistakenly classify themselves as absent from work instead of unemployed, a problem that has affected the BLS survey since the pandemic began.

Several million Americans still haven’t returned to the labor force, however, since the start of the pandemic and some 29 million were reported as receiving unemployment benefits as of the middle of last month. The US economy lost more than 22 million jobs during the worst of the pandemic. So far, it’s restored about 10.7 million jobs, leaving about half of the people who were laid off still out of work. 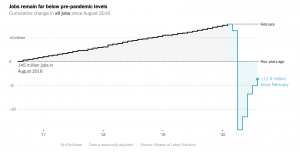 Some companies are warning that job losses could become permanent without more government help or a faster rebound in the economy.

Retailers, restaurants and hotels have been hit hardest by the effort to contain the coronavirus. The number of customers they can allow has been restricted and many Americans are still too worried to eat out, go to stores or travel. By way of example, even after the economic reopening, some 2.5 million restaurants jobs still haven’t been refilled.

The chart below shows the impact of the pandemic on the already accelerating shift to online shopping. Twelve to eighteen months from now, boarded up shop windows and shuttered big box stores may be more commonplace than any of use might wish to believe today. 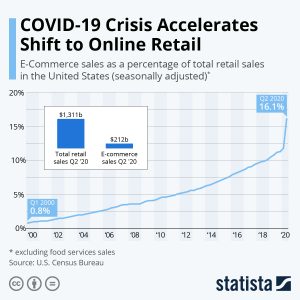 As we’ve written previously, Congress was unable to reach an agreement on the extension of a $600 enhanced unemployment benefit before it expired at the end of July, and the expectation is that last week’s jobs data will embolden Republicans and the administration to dig in their heels rather than compromise with Democrats on a new relief package.

The School Year – The Importance of Access
In many places around the country, the new school year is already underway. But the coronavirus pandemic has made the return to the classroom much more complicated. With some schools offering virtual learning, some mandating in-person learning, and some offering a hybrid of the two, students and parents are struggling to adapt.

Employers, especially those that rely on essential workers, are also experiencing a challenge. According to the Society of Human Resource Management, less than one-third of companies have a plan for employees’ child-care needs.

The new school year is highlighting how closely childcare is linked to the overall health of the economy. This may prove to be the impetus needed for a change in child-care benefits offered by companies.

At the peak of the coronavirus pandemic in March, the World Bank estimated that 1.6 billion children were out of school – nearly 80% of the world’s enrolled students.

Engagement is critical, particularly for young secondary school students. Dropout rates are still very high in many countries, and a long period of disengagement can result in a further increase. This is one reason why it’s essential that students stay connected with their school by any means necessary. Unfortunately, as the chart below shows, UNICEF estimates that over 450 million students may be cut off from remote learning. 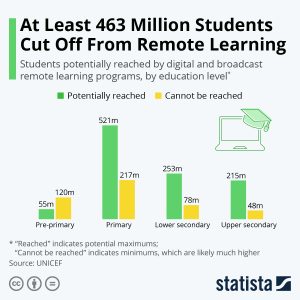 In many parts of the world, including areas of developed countries like the US, school feeding programs provide children with their most nutritious meal of the day. They are essential for the cognitive development and well-being. These programs are complex logistical and administrative endeavors.

The Public Health – The Race for a Vaccine
The global effort to create a vaccine for the coronavirus started in January, shortly after scientists in China shared online the genome of a virus causing an unknown pneumonia.

Vaccine development usually takes years, and follows a step by step process. Vaccine candidates are created in a laboratory and tested on animals before switching to a series of progressively larger human clinical trials.

In the hurry to find a vaccine, these steps are now overlapping. In some cases, human testing began before studies on animals were complete. As drug companies launch small Phase 1 trials intended to establish the correct vaccine dose, they already are planning the Phase 3 trials that will evaluate whether the vaccines are safe and effective.

The Food and Drug Administration, which will determine whether a vaccine has been proved safe and effective, has stated that a vaccine for covid-19 will need to prevent disease or decrease symptoms in at least 50% of those who take it. By comparison, the effectiveness of the flu vaccine ranges from 40-60%, according to the Centers for Disease Control and Prevention.

President Trump is hinting that a vaccine will be available very soon, possibly before Election Day in early November. It’s important to note that the “anti-vaxx” movement remains strong in the US, and surveys have shown that roughly a third of respondents wouldn’t take a vaccine if one was available.