Best Practices During Our Reopening

A microscopic view of the novel coronavirus

The Economy
Federal Reserve chair Jay Powell has warned that a full US economic recovery may take until the end of next year and require the development of a Covid-19 vaccine. Mr. Powell said last week that “additional policy measures” might be needed from the Fed and fiscal authorities to prevent greater long-term damage to the US economy.

The Fed’s response so far has included cutting interest rates to near 0%, and the implementation of a series of special programs to provide liquidity to the financial markets. Its actions have helped the stock market rebound strongly from lows in late March.

But overall, the economic data remains grim. US unemployment exploded to a post-war high of nearly 15% in April, with more than 36 million Americans filing for unemployment benefits since the coronavirus pandemic began. The true unemployment rate may be as high as 25%. And distressingly, unemployment for those earning less than $40,000 per year is approximately 40%, according to Powell.

Congress has already approved nearly $3 trillion of economic relief measures, but there is growing consensus in Washington that more fiscal stimulus will be needed. However, Democrats and Republicans are currently very divided over how to provide additional support.

Today, the markets are up strongly in early trading, in part because a first-stage clinical trial for a vaccine created by pharma company Moderna is showing promise.

The number of new cases in the US has declined over the past few days, but measuring progress remains difficult to the lack of widespread reliable testing. Months after the virus was detected, only about 3% of the population has been tested, leaving its true scale unknown. It appears that new cases are increasing in Texas, Louisiana, Virginia, North Carolina, Oklahoma, Arkansas, North Dakota, and Wyoming.

The Public Health
Even as dozens of states are pressing ahead with relaxing lockdowns, their leaders continue to stress the importance of social distancing and mask wearing. And health officials are warning that gatherings of large groups could cause a resurgence of the virus.

A governmental inspection report of nursing homes operated by Life Care Centers of America, one of the largest operators in the country, revealed that the company repeatedly violated federal standards intended to stop the spread of infections and communicable diseases even after coronavirus-related deaths exploded in its facilities.

The Administration’s Changing Role
On Sunday, Peter Navarro, one of President Trump’s top economic advisers, said that the CDC had “let the country down” at the outset of the coronavirus pandemic, and criticized the agency’s approach to testing. However, Health and Human Services Secretary Alex Azar disagreed with Navarro, saying that he didn’t believe the CDC let the country down, and noted that it serves an important public health role.

And even as President Trump has characterized the latest phase of his Administration’s response to the coronavirus pandemic as the “transition to greatness”, it appears that he has retreated from the role of decision-maker to that of salesman and marketer.

Many of the most consequential actions are being taken by those outside the Oval Office. Governors, for example, are determining when their states will reopen. CEOs and business leaders are deciding how their employees can safely and responsibly return to work. Treasury Department officials are negotiating with Congress the scope and details of the next round of financial support for American taxpayers and companies. And scientists and public health officials are heading the drive in search of a vaccine.

The Benefits of Social Distancing and Mask Wearing
Since we began our more frequent writing during this pandemic, we’ve stressed the importance of relying on science and data, rather than emotions and political biases. It seems unlikely that we will ever get the testing and contact tracing we need to be able to confidently reopen our communities in the absence of a vaccine. So, as we begin to relax the lockdown restrictions around the country, adhering to social distancing and mask wearing protocols is more important than ever.

A few weeks ago, we noted that my daughter has embarked on a fairly ambitious mask-making project, with the goal of donating at least 200 units to local non-profits. Well, this weekend, the first 100 units rolled off the “assembly line” (which consists in part of me cutting rectangles of fabric, and repeatedly poking myself with pins). They are destined for Raphael House, a Portland non-profit that supports domestic violence survivors and their families. Her project contains a small dose of capitalism: because some sewing materials are in short supply and thus marked up in price, we’ve decided that she should “sell one, donate one”, with the sales proceeds covering her cost of materials (fabric, thread, bias tape for ties, pins(!) and the odd sewing needle). 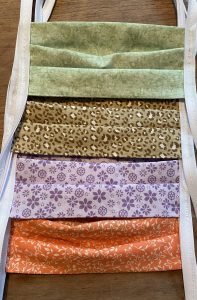 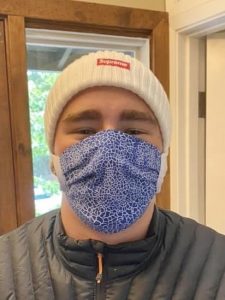 Cloth face masks made with an eclectic selection of fabrics, and an older brother modeling a finished mask.