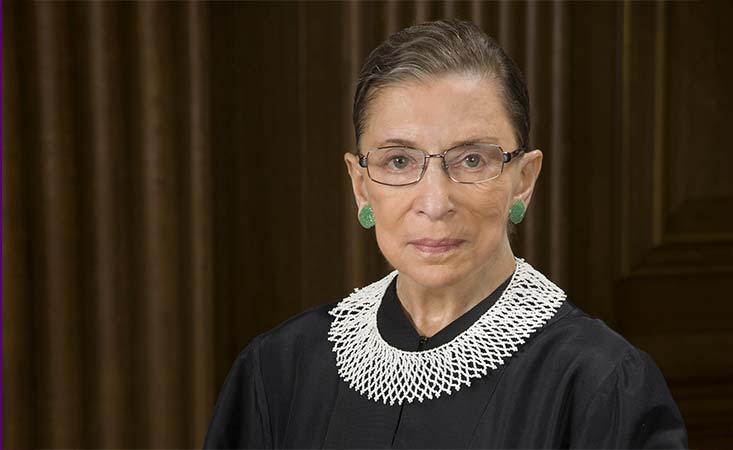 Justice Ruth Bader Ginsburg, wearing one of her many unique lace jabots

Ruth Bader Ginsburg, the icon who served on the Supreme Court for 27 years, died on Friday at age 87. She had battled various forms of cancer since 1999.

Ginsburg, who was once passed over for a clerkship on the Supreme Court because of her gender, was nominated to the Court by President Clinton in 1993. She had served on the US District Court of Appeals for thirteen years prior to her appointment.

She was known for her forceful writing on a number of cases that directly impacted women.

After completing her undergraduate studies at Cornell in the early 1950s, she enrolled at Harvard Law School, where she was one of nine women in a class of 500 and cared for her daughter while completing her degree.

She overcame sexism and gender-based discrimination – common at the time – to earn a clerkship with a federal judge in New York, and went on to teach at Rutgers Law School before becoming the first female tenured professor at Columbia in the early 1970s. Ginsburg spent much of her legal career as an advocate for gender equality and women’s rights, winning many arguments before the Supreme Court.

As the Supreme Court swung to the right, Ginsburg received attention for her fiery liberal dissents. She became a pop culture icon, nicknamed “The Notorious R.B.G.” by a law student, a reference to the late Brooklyn-born rapper The Notorious B.I.G.

In 2018, two award-winning films depicting her life story were released: “RBG” by CNN Films, and “On the Basis of Sex” by Focus Features.

Last Wednesday, Springwater hosted another of our virtual “conversations”, this time on the topic of Cash Balance Plans. Our guest was Rob Unger of Cetera Retirement Plan Specialists. Rob is an experienced retirement plan advisor who has been designing, consulting on, and administering retirement plans for over 40 years.

You can watch the recording of our conversation on Springwater’s YouTube channel, or on the Videos page of our website. 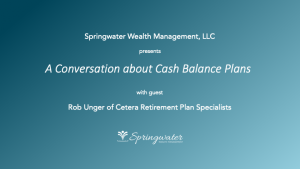 The Markets
The US equity markets were relatively flat last week. The Dow Jones Industrial Average closed the week at 27,657, down only slightly from the previous Friday’s close of 27,665. The broader S&P 500 index similarly closed the week down only slightly from the previous Friday: ending at 3,319 versus 3,340. Both indices are down about 6-7% from their all-time highs. This morning, at the market opening, both indices are down sharply, on concerns about slowing economic growth in the US and a resurgence of the coronavirus in certain European countries.

The Economy
Last week, the Federal Reserve announced that it expects the unemployment rate to fall to 7.6% by the end of this year, and to 5.5% by the end of 2021, despite the fact that the course of the coronavirus pandemic and its impact on the economic recovery are unknown.

The projections suggest that the Fed leaders are growing more optimistic about the recovery than they were earlier this summer.

Because we have not been able to get ahead of the virus, the labor market continues to struggle. Applications for US state unemployment benefits have decreased over the past several weeks, but remain very elevated compared to pre-pandemic figures.

The Public Health
The Centers for Disease Control and Prevention has acknowledged officially what many medical experts have long believed: The coronavirus often spreads through aerosols. The CDC has posted updated guidance on its website stating that the virues most often spreads when people are in close proximity and particles are “inhaled into the nose, mouth, airways, and lungs.”

Yet more than six months into the pandemic in the US, a shortage of N95 masks persists, leaving health-care workers exposed and health experts frustrated. With the winter flu season around the corner, the shortages of critical personal protective equipment may be deadly.

The chart below shows the testing results for the country as a whole, with a positivity rate of below 5%: 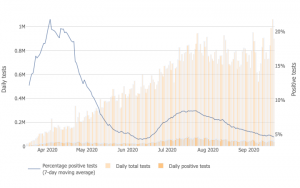 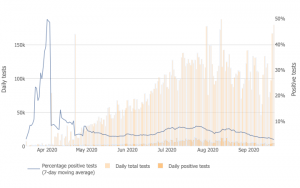 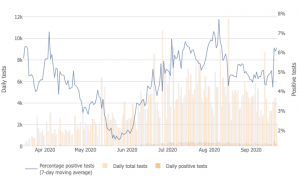 Contrast California and Oregon with South Dakota, a state that has adopted a far more laissez faire attitude regarding physical distancing measures and face mask requirements. 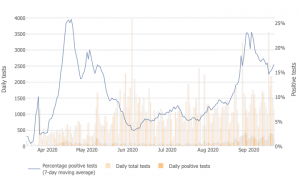 The US is approaching a grim milestone – a quarter-million dead – that public health officials agree was completely avoidable. Worryingly, projections show the number of fatalities nearly doubling to 378,000 by January 2021.

Parting Thoughts
An already negative election campaign is likely to become even more toxic with the passing of Justice Ginsburg, as it offers President Trump the opportunity to quickly fill her seat before election day. He has already indicated his intention to do so, with the support of Senate Republicans. That Senate majority leader McConnell and several of his colleagues denounced – and ultimately blocked – President Obama’s desire to replace former Justice Scalia with Merrick Garland under similar circumstances in 2016, seems not to concern them

We leave you with one of many memorable quotes from Justice Ginsburg, the likes of whom we may never see again.

Fight for the things that you care about, but do it in a way that will lead others to join you.