An Education System Struggles to Adapt

The Markets
Stocks closed Friday largely unchanged, as investors digested mixed new economic data and shrinking prospects of further governmental support for the economy in the near term.

The Economy
At its most recent meeting on monetary policy in late July, the Federal Reserve sent a clear signal that it is totally committed to supporting the economy as it recovers from the COVID-19 crisis.

However, last Thursday, Senate Majority Leader McConnell adjourned the upper house for its August recess, without having passed a new relief bill. Senators and members of the House of Representatives are not scheduled to return to Washington, DC until after Labor Day.

President Trump signed an executive order that he said will enhance unemployment benefits by circumventing Congress, but there are questions about the order’s legality and, more practically, how it would be implemented by the states. It’s also unclear how it would affect unemployment insurance in the near term.

Fewer than 1 million workers filed for unemployment insurance last week, the first time that initial claims fell below 1 million since mid-March. An additional 488,000 new claims were filed for Pandemic Unemployment Assistance, which is available to self-employed and so-called “gig” workers. 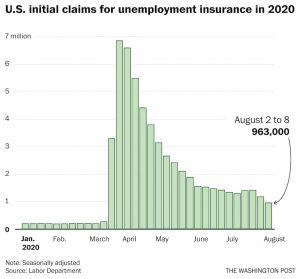 In total, more than 28 million Americans are receiving some form of unemployment benefits.

Economists generally agree that the longer the pandemic dampens the economy, the more likely job losses will become permanent.

COVID-19 Numbers
Globally, across 188 countries and regions, there have been over 21.7 million cases and 776,000 deaths. In the US, there are now over 5.4 million reported cases and over 170,000 fatalities. We remain an outlier – with only 4% of the world’s population, we have over 20% of the cases and fatalities.

Notably, these three companies have also promised 500 million doses in aggregate to the US – 100 million each from J&J and Novavax, and 300 million from AstraZeneca.

The primary focus of vaccine distribution is on developed nations in the West, which is raising concerns about an extended virus impact on low- and middle-income countries. The World Health Organization and the Gates Foundation have therefore directed their resources toward these nations.

The Coronavirus pandemic will only end when enough people are protected, either by vaccine or by virtue of having previously been infected. This is what’s commonly known as “herd immunity”. It doesn’t mean the virus is gone, only that with fewer people to infect, it will move much more slowly through a population.

Months ago, scientists and public health experts thought that some 70% of the population would need to be immune from the virus to avoid large outbreaks. But in recent weeks, a number of scientists have indicated that herd immunity may be possible at a lower level of 45-50%.

If this is correct, certain areas in New York City, London, Mumbai and other major population centers may have already reached this threshold, and therefore may be able to avoid a potentially devastating “second wave” of infections this winter.

The New School Year
In some states, students have already returned to the classroom for the start of the new school year. Some districts are experimenting with a fully online experience, some are attempting a hybrid of online and in-person learning, and a few have even committed to 100% in-person schooling. In Georgia, Tennessee, Mississippi, Indiana and elsewhere, some schools, mainly in suburban and rural areas, have been open for almost two weeks.

Students returned to the classroom in Cherokee County, a suburb north of Atlanta, on August 3. The first notification of a positive test was sent to parents the next day. This week, nearly 1,200 students and staff members in the district have already been ordered to quarantine. Two high schools in the district closed last week until at least August 31.

The pandemic is also forcing the education system to confront head-on the technology gap that exists. With many schools switching to remote learning, students without high-speed internet access are locked out of classes. In 2018, some 17 million students lived in homes without high-speed internet service, and more than 7 million didn’t have computers at home. The issue affects a disproportionately high percentage of Black, Latino and Native American households, with nearly one-third lacking fast internet service at home.

Education advocates have argued that Congress could provide an easy fix as part of a relief package, by expanding an existing program that helps schools and libraries get internet service, and that distributes basic laptop computers and wifi hotspots to needy students. But those proposals collapsed together with the negotiations between Congress and the White House on a new relief package.

The Way Forward
As we noted last week, and as has been the case since the virus arrived in the US and was identified as highly contagious, we largely have our destiny in our own hands. To the extent we’re willing to follow the recommendations of our public health officials:

we should be able to dramatically slow the spread of the virus, and eventually bring it under control.

The city of Portland, Oregon has resources available for those who need help in acquiring face masks, sanitizer and cleaning supplies here.