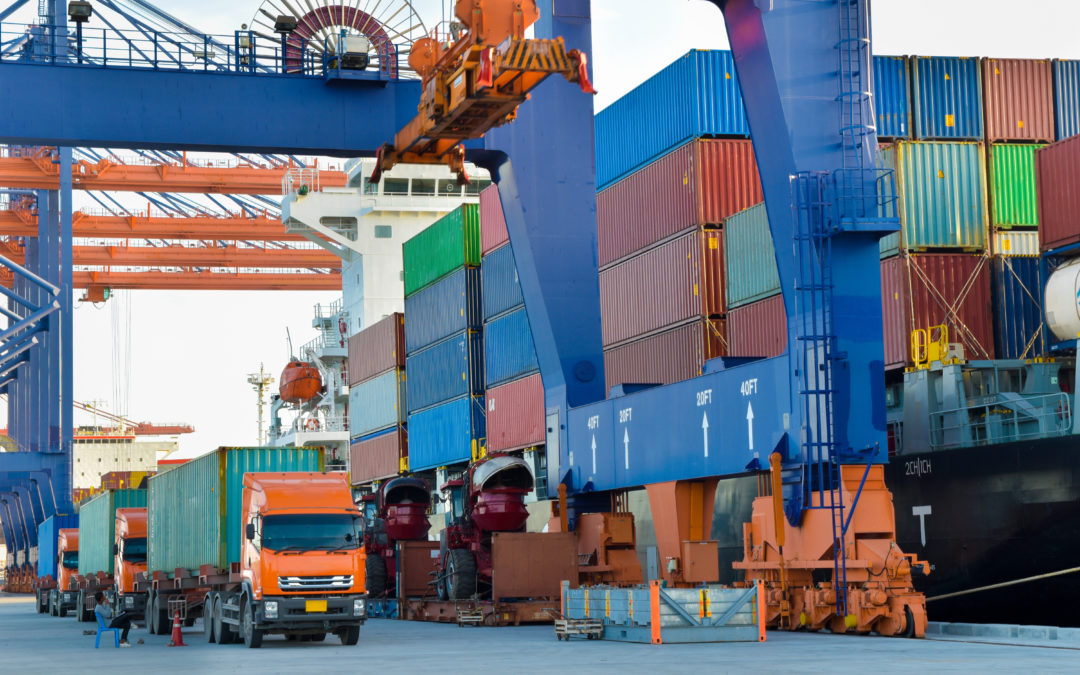 The US economy is picking up steam, leading the world out of the Coronavirus pandemic

Both the Dow Jones and the S&P 500 hit fresh record highs this morning, and the Nasdaq is up around 0.8%, a sign that investors continue to expect strong economic recovery. The jobs report released Friday showed the US economy added the most jobs in 7 months and the unemployment rate fell to 6%.

The chart below shows the performance of the Dow Jones Industrial Average over the past 12 months: 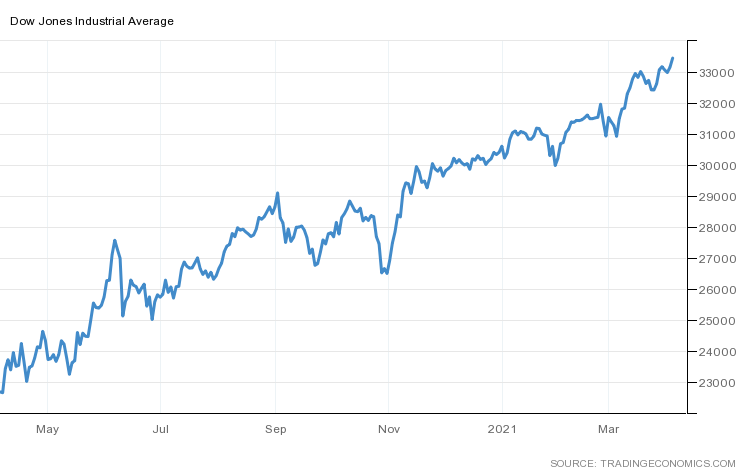 And the chart below shows the broader S&P 500 Index over the same 12-month period. The index traded above the 4,000 level for the first time ever last week: 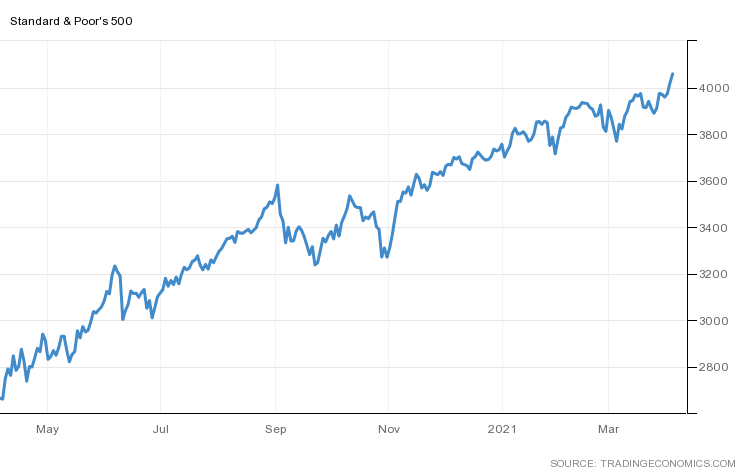 As we’ve noted over the past couple of weeks, the bond market has responded to the strengthening economy and expectations for modestly higher inflation in the short term by pushing up bond yields. The chart below shows the yield on the benchmark 10-year Treasury over the past 12 months:

With stocks in the US trading at all-time highs, we’ve been asked whether we still feel that US stocks are relatively expensive. We can look at the historical data and see for ourselves. The chart below shows the Shiller CAPE ratio for the past 100+ years:

We can conclude that stocks have only been this expensive once before – in 1999, right before the dot com crash.

The number of Americans filing for first-time unemployment benefits rose to 719,000 for the week ended March 27th, up from last week’s 658,000 and higher than the market’s expectation of 680,000. Nevertheless, claims are close to their lowest level in a year. The four-week moving average, which removes week-to-week volatility, fell to 719,000, the lowest since March 2020.

To pay for the plan, the Administration is proposing to raise the corporate tax rate from 21% to 28%, and to have multinational corporations pay more US tax on overseas profits.

The proposed investment and spending can be categorized as follows:

Modernize 20,000 miles of highways and roads; repair 10,000 bridges; and, by 2030, build a network of 500,000 electric vehicle chargers. The objective is to renew America’s aging or inadequate transportation corridors, while reducing reliance on fossil fuels that exacerbate climate change.

Allocate more than $200 billion in tax credits and grants to improve and build affordable housing. The objective is to make millions of homes and commercial buildings more energy efficient; reduce the hazard of old lead water pipes; bring rural areas up to urban standards for digital infrastructure like broadband access; and modernize the electrical grid for greater reliability and wider deployment of low-carbon electricity.

Invest at least $500 billion in the manufacturing sector, worker training, and research and development. The objective is to position the US to compete against China and other nations in the race to develop and lead in the industries of the future, like semiconductors and advanced batteries.

Dedicate $400 billion to expand access to care for older and disabled Americans, and to improve pay and benefits for caregivers. The administration wants to broaden the traditional definition of “infrastructure” to include the provision of in-home care, arguing that, from an economic standpoint, it’s as much about the workers providing that care (disproportionately women of color and low-paid) as it is about the patients.

For the past few months, the news about the pandemic in the US has been largely positive. The vaccines developed in record time are highly effective, and millions of people are receiving doses each day. Cases, hospitalizations and deaths have declined sharply from the highs reached in January.

According to the CDC, cases were steadily decreasing for over two months. However, the trend is changing, and cases have increased over the past 12 days. The US has averaged 65,000 new cases a day over the past week, a 19% increase from two weeks ago. The current 7-day moving average of daily new cases is up over 8% compared with the previous week. Public health experts are attributing the increase to a few factors: the more contagious UK variant B.1.1.7 is spreading; some public officials are continuing to relax restrictions on gathering, and lifting mask requirements; and the vaccination level has not yet brought the country to herd immunity. 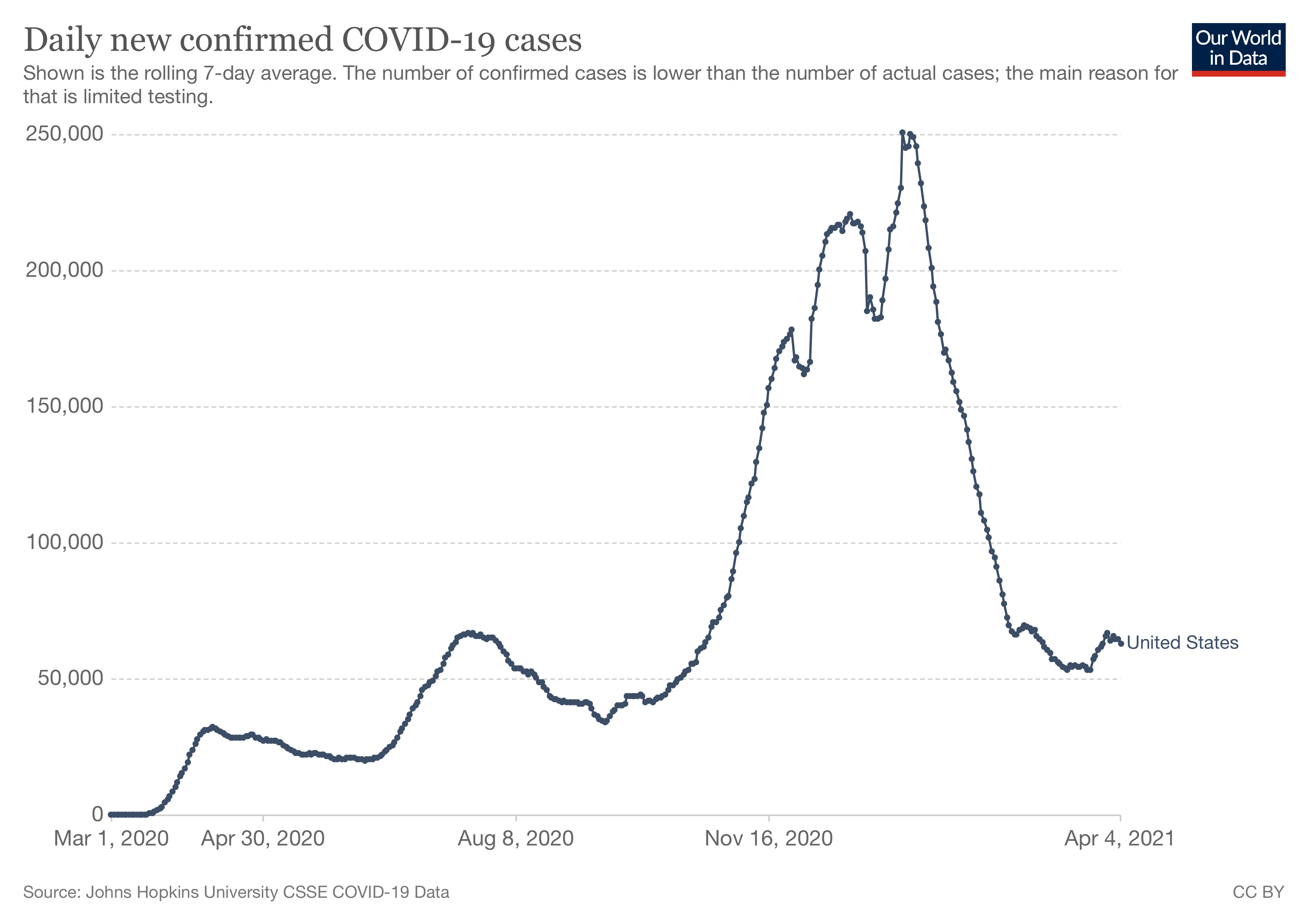 Unfortunately, even as testing is declining because of accelerating vaccination, the positivity rate is creeping up. 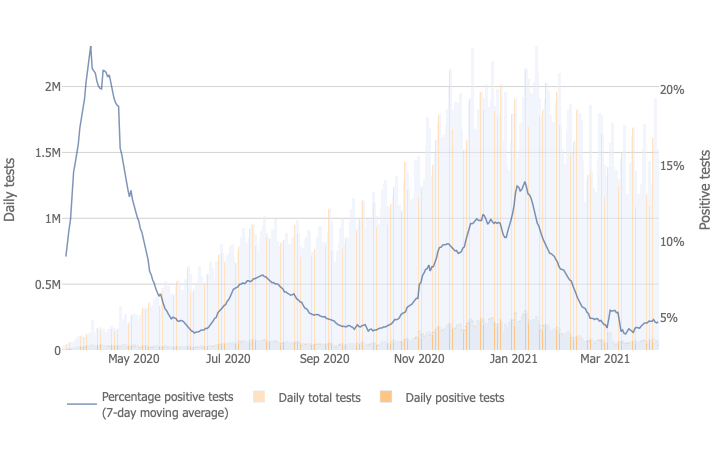 The rate of vaccination is accelerating. Over the past week, an average of 3 million people per day received a vaccination dose. Despite the general success of the program, there are some significant resistance problems. For example, nearly half of white evangelical adults in the US say they will not get vaccinated.

The chart below shows the daily vaccine doses administered since mid December. 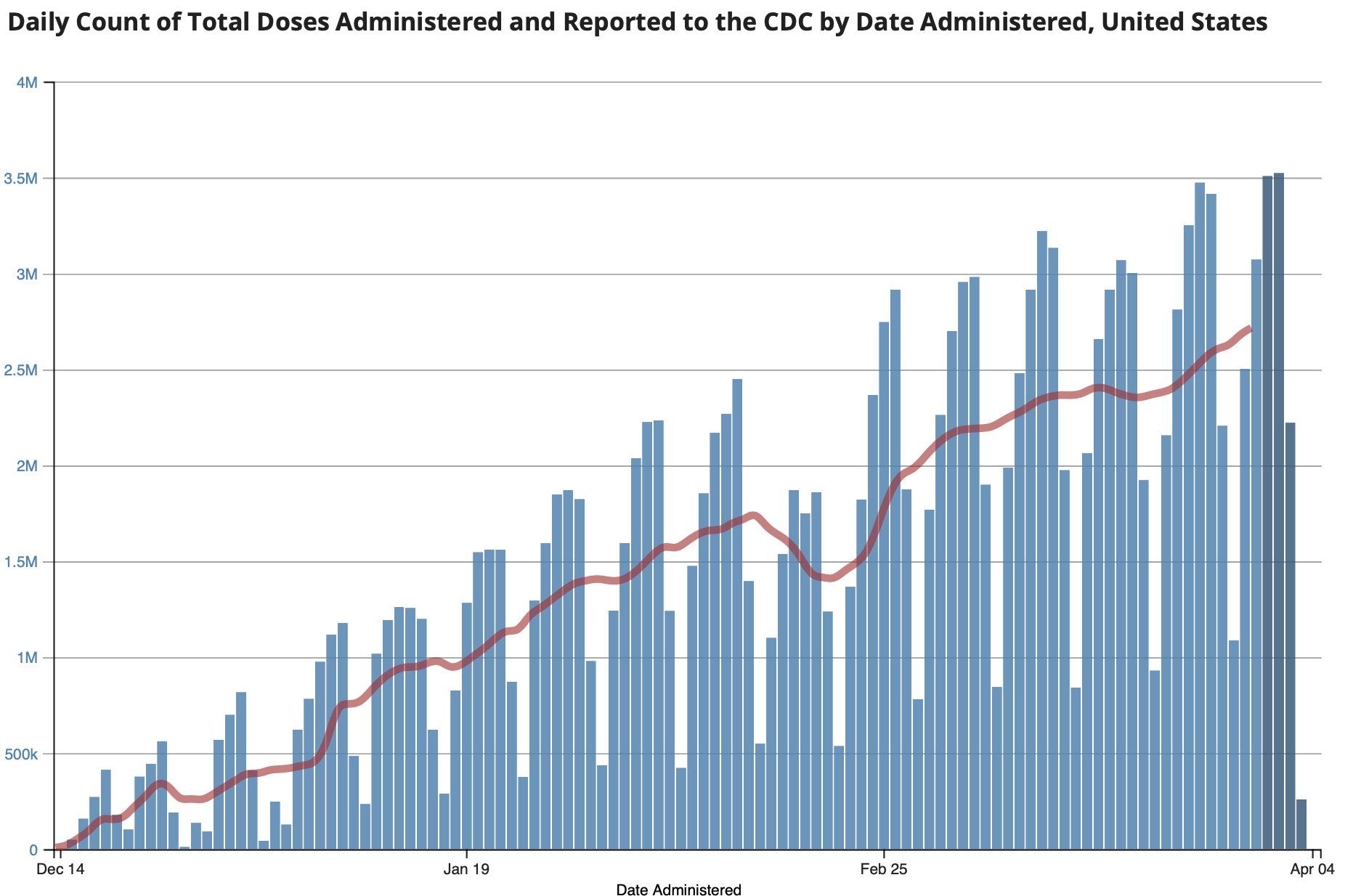 Last week, Dr. Anthony Fauci expressed optimism that the US will be able to avoid a fourth wave of Coronavirus infection – as Europe is currently dealing with – because vaccinations are winning the battle against spread of the virus. At the same time, he cautioned against premature relaxation of the measures that have kept people safer – physical distancing and mask-wearing when appropriate.