A Test of Our Collective Goodwill

A food pantry in South Florida during the coronavirus pandemic

The Economy
This morning, the Department of Labor announced that the unemployment rate unexpectedly declined to 13.3% in May, a signal that the economy is beginning to recover. Roughly 2.5 million jobs were added last month, and some of the sectors that have been hardest hit by the crisis saw the biggest gains. Restaurants, bars and other food service employment accounted for about half the increase, after steep declines the previous two months.

And a significant portion of last month’s growth – about 40% – was the result of part-time employment. This supports the concern some economists have that recovering from this recession will take longer and be more challenging than prior economic crises. 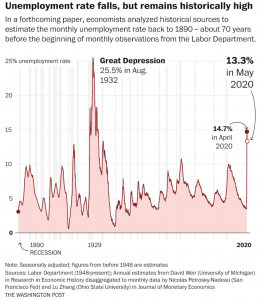 The nonpartisan Congressional Budget Office (“CBO”) expects the domestic economic impact of the coronavirus pandemic to exceed $8 trillion, and projects that the US economy won’t fully recover until 2030. The CBO forecasts unemployment levels continuing at above 10% into 2021.

According to the Washington Post, nearly half of commercial rent/lease payments were unpaid in May. Several oil and gas industry companies filed for bankruptcy protection, as did high-profile retailers like J. Crew and J.C. Penny. American Airlines reported that passenger travel was down 80% last month.

The Public Health
In the US, the number of new cases has for now stopped falling, hovering around 20,000 per day for the past 10 days. The virus continues to circulate widely. As states move to reopen their economies, thousands of new cases are still being identified each day and a return to “normal” therefore seems very far off.

Paradoxically, however, the trend may actually be encouraging. The number of tests being conducted has been rising rapidly over the past two months, which means more virus cases are being detected than otherwise would have been. Another key measure is the percentage of positive tests, and that figure has continued to decline.

Overall, the data suggest that the virus’s spread continues to slow, but only slightly and not as rapidly as in some other countries.

The coronavirus has impacted every state in the country, but its impact has been very uneven. In New York and New Jersey, the two hardest-hit states, more than 500,000 people have been infected. On a per capita basis, though, the places with the most cases have been small cities and rural communities in the Midwest and South.

Virus outbreaks have been traced to funerals, fast food restaurants, cruise ships and Navy ships. But most of the biggest clusters identified have been in nursing homes, food processing plants and correctional facilities – places where people are in close proximity and with little opportunity for social distancing.

Looking Forward
The coronavirus pandemic has fundamentally changed American life. Concerts, parades and sporting events have been canceled. Unemployment claims have reached historical highs. Some governors have imposed quarantine requirements on Americans who cross state lines. And even as states reopen, public health officials have warned that the virus is likely to remain a persistent threat.

So, what can we do? Since the coronavirus appeared, we at Springwater have consistently advocated for following the science. That means good hygiene (frequent hand-washing), social distancing, and wearing a mask (to limit the spread of the virus).

Yes, it’s true that the advice and guidance from the CDC, the NIH, the WHO and other governmental entities has changed over time. But that’s to be expected when the scientists and public health experts are dealing with a new (“novel”) virus.

This pandemic has been, and for the foreseeable future will continue to be, a test of our collective goodwill. What are we each as individuals prepared to do, to protect the most vulnerable among us?