The coronavirus is surging across the country yet again. Health officials reported more than 11 million total cases of coronavirus as of yesterday, with new levels of hospitalizations. The case count passed 10 million only a week ago, and more than 1 in 400 Americans have tested positive since.

The latest virus surge began accelerating across much of the country in the middle of October. It took just over two weeks for the country to go from 8 million cases to 9 million by October 30; it took only ten days to grow from 9 million to 10 million.

More than 135,100 new cases were recorded on Sunday, the most cases reported on a Sunday since the pandemic began. The new 7-day average is now 150,000 cases a day, which represents an 81% increase from two weeks ago. Hospitalizations have reached a record of nearly 70,000.

Nationwide, fatalities remain at levels below their peak during the spring, but they are rising rapidly and approaching 250,000. There were 620 new deaths reported on Sunday, the highest number of deaths reported on a Sunday since May 17, pushing the seven-day average to more than 1,140 a day, a 39% increase from the average two weeks ago. 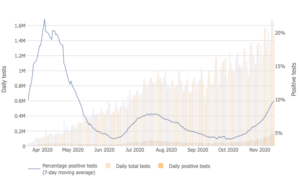 The Markets
On Friday, the Dow Jones Industrial Average closed at 29,813, up just over 1%. The broader S&P 500 index closed at 3,612, up a little less than 1%. Both indices are only slightly off their all-time highs.

This morning, US stocks are poised to trade strongly upward, on news announced this morning by biotechnology firm Moderna that preliminary analysis of its experimental coronavirus vaccine is nearly 95% effective in preventing illness.

The Economy
Even as the coronavirus rages virtually unchecked across the country, a broad array of businesses – including hospitality, restaurant and retail groups – are fighting to preserve their ability to operate, in an effort to block shutdowns and other restrictions that public health experts believe are essential to bring the virus under control. Their lobbying coincides with warnings sounded by epidemiologists about the latest surge in virus cases.

But industry’s calls for additional stimulus aid have largely fallen on deaf ears in Washington. Democrat-led efforts to authorize trillions of dollars in new relief spending have encountered fierce opposition from Republicans. In fact, since the election the two parties have drifted even further apart on a follow-up to the $2 trillion Cares Act, even as many of the act’s programs have run out of funding or expired.

The Labor Market
The number of Americans filing for first-time unemployment benefits declined to 709,000 in the week ended November 7th, below expectations of 735,000 and down from the previous week’s revised level of 757,000. It is the lowest number since late March, but still well above pre-pandemic levels.

Also, more than 298,000 people applied for help from the Pandemic Unemployment Assistance program, which covers workers that do not qualify for initial claims, compared with 362,000 in the previous period.

According to the US Department of Labor Statistics, the unemployment rate dropped to 6.9% in October 2020, down from September’s 7.9%. However, the jobless rate remains well above pre-pandemic levels of about 3.5%, reflecting the fact that the labor market recovery is slowing in the absence of additional fiscal stimulus and rapidly rising new coronavirus infections.

COVID-19 Numbers
Across 191 countries/regions, over 54.5 million have been infected, and over 1.3 million have died. In the US, over 11 million have contracted the virus, and over 246,000 have lost their lives.

The Race for a Vaccine
Unlike Pfizer, which invested $2 billion of its own money in researching and developing its vaccine announced earlier this month, Moderna is participating in Operation Warp Speed, the government initiative designed to mitigate the financial risk of vaccine and therapeutics development by providing upfront funding to companies. Moderna received $2.5 billion from the US government to support research, development and manufacturing of its vaccine, while Pfizer signed a contract to sell vaccine doses to the US government.

Moderna believes it can produce 20 million doses by the end of the year, enough for 10 million people to receive the required two shots. The company hopes to produce at least 500 million doses next year, with the possibility of scaling up to 1 billion doses, depending on the availability of raw materials.

The focus of the government and the drug companies will now shift to the challenges of manufacturing and distribution. The Pfizer vaccine requires ultra-cold storage conditions not widely available in typical vaccination programs. The company has been working to overcome that limitation. Moderna announced today that its vaccine can be stable at refrigerator temperatures for a month and frozen for up to six months. It also will not require dilution at the point of care, as the Pfizer vaccine does.