A New President in the Midst of an Intensifying Global Pandemic

After days of suspense, the Associated Press announced this past Saturday morning that Joe Biden has won the United State presidential election. The major news networks around the country and the world quickly followed suit.

It was a historic week which saw one of the most acrimonious elections in American history. The Democrats will retain control of the House of Representatives. However, their majority has been reduced. In the Senate, it appears that, unless there are surprises in runoff elections in Georgia (and that’s certainly possible), the Republicans will retain control.

So, we will again have a politically-divided government. President-elect Biden will immediately encounter a divided nation and a grave national health crisis. He will also be under pressure from within his party to quickly forge a coalition in both houses of Congress to pass additional financial relief for individuals and families, businesses, and state and local government.

The week was also historic, because the novel coronavirus is spreading rapidly across the nation. All of the major metrics are concerning: the number of infections, the rate at which infections are increasing, the positive test rate, the number hospitalized, the number of deaths. More on the virus below.

The Federal Reserve
The Federal Reserve remains very concerned about the impact of the coronavirus. The Fed has already provided unprecedented monetary support to the US economy in the face of the pandemic. The central bank has reduced interest rates close to zero. It is also buying massive amounts of short, medium- and long-term debt in an effort to dampen interest rates across the yield curve. The theory is that investors will be driven toward riskier investments (e.g. the stock market), businesses will be enticed to invest in their operations and consumers will be motivated to spend on goods and services.

The Fed made a fundamental shift in policy earlier this year when it indicated that it would allow interest rates to rise to levels that may push inflation upward. In the past, the Fed has acted quickly to dampen rising inflation by raising interest rates. We shouldn’t expect such action for the next several years.

The Fed’s job will become increasingly difficult, however, as the nation continues to run massive budget deficits and add trillions to the nation’s debt. If the Democrats somehow gain control of the Senate, look for even larger federal programs that add even more debt.

Fed officials continue to press Congress and the White House for additional fiscal support for Americans who are suffering in this pandemic.

COVID-19
Globally, across 213 countries and territories, there have been over 50 million confirmed cases and over 1.25 million deaths. In the United States, nearly 10 million have been infected and over 237,000 have died.

New cases are rapidly increasing across the United States. The country has set several daily records for new cases, now averaging over 100,000 per day. There over 56,000 people currently hospitalized and 11,000 in the ICU with the virus. 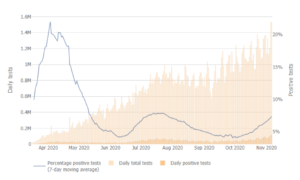 This image shows that the number of deaths in the US has remains level. However, we can expect a marked increase in the next several weeks. 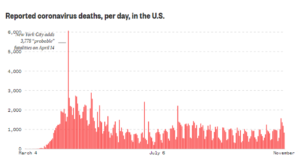 The US is far from the only country losing ground to the virus. However, many have been successful in corralling it. Here are selected countries.

(click on this link for the interactive map): https://ourworldindata.org/coronavirus 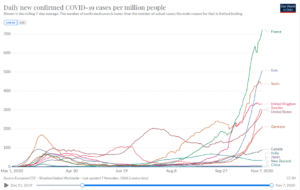 The Labor Market
The employment market continues to heal. The Labor Department reported that new applications for unemployment benefits dropped by 7,000 to 751,000 for the week ending October 31, 2020.

The labor market has recovered 12.1 million of the 22 million jobs that were lost in March and April when the nation’s economy was largely shuttered. This means, of course, that there are still 10.1 million fewer jobs than there were in the spring.

The unemployment rate stands at 6.9%, down from a peak of 14.7% earlier in the year. Millions more, however, are still underemployed.

The progress that has been made in the labor market is jeopardized by the surge in coronavirus infections. Government officials across the country have already begun to action to slow the virus and these measures will also slow the economy.

Market Efficiency
The past few weeks have been an interesting study in how our financial markets price in information. The many moves of the stock market can be discerned in the broader context of information … about the election and its implications for public policy and the economy, the spread of the virus and its pervasive impact on society, and the prospect of additional coronavirus federal relief.

Markets are highly efficient and rapidly adjust prices to reflect information. As we start the new week, news arrived early this morning that pharmaceutical company Pfizer and partner BioNTech announced that their vaccine for COVID-19 has been found to be more than 90% effective in late-stage testing. In addition, investors had the weekend to process the presidential election outcome and realize that a split government means moderate policies for taxation, spending and regulation.

Based on this information, stock market futures rose sharply early this morning and the market opened higher. The Dow opened was up over 4% as we prepared to send this to you. This is yet another example of markets quickly reacting to new information.