A Nation at a Crossroads

We are now just one day away from the most consequential national election in modern American history. As of Saturday, nearly 92 million Americans had already cast their ballots, with a majority of states reporting record early voting turnout. The total votes so far represent about two-thirds of all votes cast in the 2016 election.

Former Vice President Biden continues to hold a substantial lead over the President in national polls. There is virtually no doubt that Biden will win the popular vote, perhaps by a record margin. However, as in 2016, the President still has a path to election via the electoral college.

The final result is likely to be contested, as Republican local and state officials look to disqualify votes for various reasons, and Democrats prepare to challenge these decisions in court.

The Labor Market
The number of Americans filing for state unemployment benefits fell to 751,000 for the week ending October 24. This is still a historically high number, but it is an extension of a downward trend as illustrated below.

The Markets
On Friday, the Dow Jones Industrial Average closed at 26,501, down 157 points for the day. More significantly, the index fell nearly 1,700 points for the week. The S&P 500 index closed at 3,270, down 40 points (or 1.2%) for the day. For the week, the index declined nearly 175 points. The down week reflects investor concerns about the resurgence of the Coronavirus in the US and many European countries.

COVID-19 and the Public Health
Globally, across 190 countries and territories, there have been over 46 million confirmed cases and over 1.2 million deaths. In the United States, over 9.2 million have been infected and over 231,000 have died.

The virus is surging in many parts of the world, particularly in Western Europe and the United States. The predicted winter-time spike has arrived, as people have relaxed their efforts to remain safe (e.g. wearing a mask, avoiding groups, and physical distancing) and colder weather has forced gatherings indoors.

The rising positivity rate is very troubling, because it indicates that the virus is spreading. The World Health Organization recommends that governments continue containment measures until the positive test rate remains below 5% for at least two weeks. Unfortunately, many areas of the United States are experiencing a rapid increase in infections and the nation itself is setting new daily records for the number of Americans who test positive. Late last week, for example, the US set a new global record for a single-day infection total, a dubious distinction.

The chart below show the number of daily tests, the number of positive tests per day, and the percentage test which are positive, for the US. All three figures are rising steadily. The positivity rate is well over 5%. 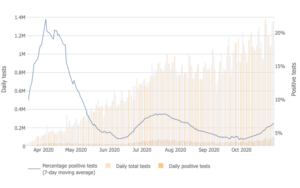 The two charts below show the same data for Wisconsin, first, and for South Dakota, second. 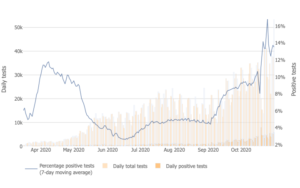 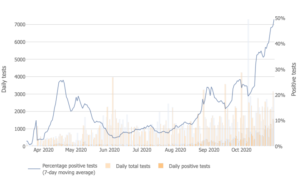 Note that for both states, the positivity rate has exploded over the past few weeks. As we have written before, ideally we would like to see the number of tests increasing, but the positivity rate declining – this would show containment of the virus.

The chart below provides more information about testing, new cases, hospitalizations, and deaths across the US as a whole.

The chart below confirms the increasingly dire situation in Europe: 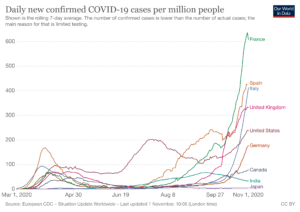 There is concern in several European nations that their health care systems will soon be under strain again, as they were this spring during the first wave of the pandemic.

Here in the US, Dr. Anthony Fauci, one of the world’s leading experts on infectious diseases and increasingly the foil of the President, said Friday that the country needs to make an “abrupt change” in public health practices and behaviors. He said the country could surpass 100,000 new coronavirus cases a day and predicted rising deaths in the coming weeks.

His comments were made as the US set a new daily case record Friday with more than 98,000 reported. As hospitalizations increase, daily deaths are also rising, with more than 1,000 reported Wednesday and Thursday, bringing the total to more than 231,000 since the start of the pandemic.

Closing Thoughts
We leave you with words from Dwight D. Eisenhower, the 34th president of the US, who served from 1953 to 1961.

“The future of this republic is in the hands of the American voter.”