A Deadline for Economic Relief Looms

Treasury Secretary Mnuchin and House Speaker Pelosi are negotiating a new COVID relief bill, up against a deadline

Earlier this month, Springwater hosted another of our virtual “conversations”, this time on the topic of Doctor Visits During the Pandemic. Our guest was Marlo McIlraith, MD, a physician with Oregon Health & Science University. Dr. McIlraith, who has over 24 years of experience, discussed what has and hasn’t changed about seeing your doctor, and how to plan for a virtual visit.

You can watch the recording of our conversation on Springwater’s YouTube channel, or on the Videos page of our website.

Our next conversation is scheduled for Wednesday, November 18. Stay tuned for more details.

The EAFE index – which represents large and mid-sized companies across 21 developed markets excluding the US and Canada – is down -7.6% when measured in USD, and down -11.5% measured in EUR.

As we have written many times over the past couple of years, the strong performance of some stocks have pushed the major US stock indices to record levels. As a result, relative to non-US developed markets and emerging markets stocks, US equities are expensive.

How expensive are they compared to past market cycles? The chart below is the Shiller CAPE Ratio. If you would like to understand how the calculation is made, you can read more about the Shiller CAPE Ratio. Suffice it to say that the higher the line, the more expensive stocks are (i.e. the more investors are willing to pay (P, for price) for a dollar of earnings (E)).

The lead-up to an election often brings with it questions about how financial markets will respond. But the outcome of an election is only one of many inputs to the market. The research team at Dimensional Fund Advisors has prepared an interactive exhibit that examines market and economic data for nearly 100 years of US presidential terms. The data shows a consistent upward march for US equities, regardless of the administration in place. This is an important lesson on the benefits of a long-term investment approach.

You can view an interactive PDF of the data on the Springwater website (clicking link will take you to our website). 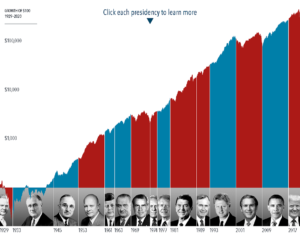 The Economy
On Sunday, House Speaker Nancy Pelosi set a Tuesday deadline for her and Treasury Secretary Mnuchin to reconcile significant policy disputes if they hope to pass another relief bill before the election on November 3. That tight time frame brings pressure for a break in the stalemate that will have enormous implications for millions of Americans still struggling during the pandemic. Until now, the Trump administration and the House leadership have been unable to agree on a top-line amount, as well as on what should be included in the package.

Even as Mnuchin and Pelosi work earnestly to hammer out an agreement on a comprehensive relief package, Senate majority leader McConnell is hoping to get the Republican-majority Senate to pass a relatively small, narrowly-targeted bill before the election. Democrats have said that they will not support it, dismissing it as election-oriented window dressing.

The number of Americans filling for unemployment benefits rose by 898,000 in the week ended October 10th, the highest level in almost two months and well above market expectations of 825,000.

The unexpected increase in jobless claims added to concerns about the labor market recovery, a day after Treasury Secretary Steven Mnuchin said that getting a deal on coronavirus aid before the November election would be unlikely.

Also, more than 373,000 people applied for help from the Pandemic Unemployment Assistance scheme, which covers workers that do not qualify for initial claims.

The Public Health
For the first time since July, the US reported over 60,000 new daily confirmed Coronavirus cases at the end of last week. Many of the infections are in rural areas away from the major cities that experienced the worst of the outbreak earlier this year.

The chart below shows the total daily number of virus tests conducted in each US state and of those tests, how many were positive each day. The trend line in blue shows the average percentage of tests that were positive over the last 7 days.

The rate of positivity is an important indicator because it can provide insights into whether a community is conducting enough testing to find cases. If a community’s positivity is high, it suggests that that community may largely be testing the sickest patients and possibly missing milder or asymptomatic cases. A lower positivity may indicate that a community is including in its testing patients with milder or no symptoms. The WHO has said that in countries that have conducted extensive testing for COVID-19, should remain at 5% or lower for at least 14 days.

Worryingly, the trend line is headed up, above 5%. 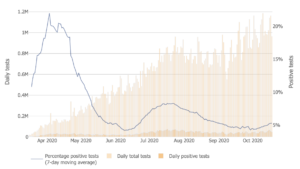 In Europe, public health officials fear an accelerating and possibly “exponential” rise in infections, with confirmed cases rocketing from 6 million to 7 million in just ten days.

Europe implemented severe lockdown conditions this spring, and the reward was a summer that was more normal than many people had expected. But by the end of August, infection counts were rising again, with cases concentrated among younger people, who considered infection to be unlikely or harmless. Now it is spreading to their parents and grandparents, and medical systems across the continent are under strain. 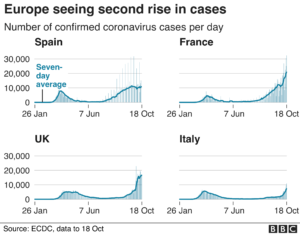 Parting Thoughts
We are about two weeks away from what for the vast majority of Americans will likely be the most important election of their lifetimes. While voters in many states are faced with sharply reduced numbers of voting locations, and lines to cast their ballot that are often 10+ hours long, they’re demonstrating the importance of civic participation by persevering to make their voices heard.

Every American should recognize that the right to vote is an important one, and one that should not be taken lightly. Make your voice heard.

Be safe, stay healthy, and keep the faith.